This is the official adaptation of the original screenplay for Alien 3, written by William Gibson, the award-winning science fiction author of the cyberpunk cult classic Neuromancer. You’ll see familiar characters and places–but not all is the same in this horrifying Cold War thriller!

William Gibson’s Alien 3 (aka Alien 3: The Unproduced Screenplay) is an adaptation of one of the two scripts that William Gibson wrote for Alien 3. Gibson’s scripts were actually the first done for Alien 3 and while his wild first draft has been easily accessible for a long time, his second has only recently (the last handful of years) made its way online.

I am admittedly not a huge fan of Gibson’s first draft. It’s absolutely crazy. Now his second I’m a big fan of. I do think it wasn’t quite there and needed a third draft to tidy up some lingering problems, but I’d actually consider it my favourite of the could-have-been Alien 3’s, with David Twohy’s take coming closely after. This series is an adaptation of that second, far more reasonable draft.

Ever since Dark Horse released The Star Wars, an adaptation of George Lucas’ original draft of Star Wars, I’ve been dying to see some of the unrealized Alien scripts get the same treatment. I was one of several people that championed this concept to 20th Century Fox so when Dark Horse first teased this series on Alien Day of 2018, I was more than a little excited. 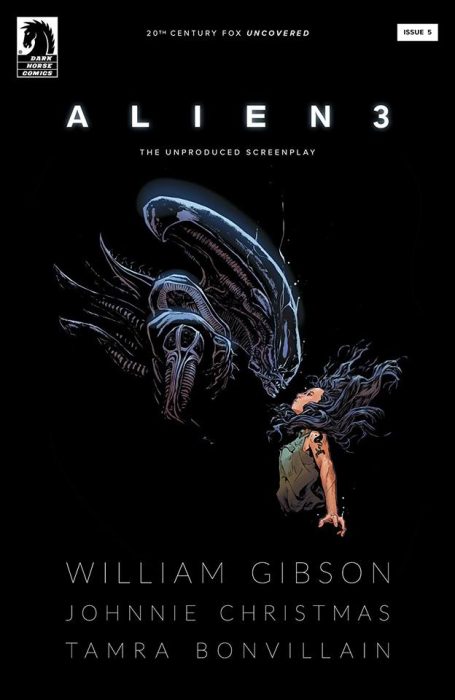 Johnnie Christmas provided scripts, interior art, and the standard covers with regular collaborator Tamra Bonvillain doing colours. The first issue dropped on the 14th of November 2018, with the fifth and final issue releasing on the 27th of March 2019.

Christmas’ adaptation of Gibson’s script is incredibly faithful which is both a huge plus and something of a negative. As I said above, I thought this particular direction for Alien 3 needed another polish to iron out some issues, so in keeping so faithful to the script the comic inherits the same problems. For those going in wanting as accurate an interpretation of this script as possible, it’s a huge selling point! For those who don’t care as much, it means the series has some story issues.

There are some very small differences from the scripts with the more noticeable being the shuffling about of scenes to better work with the opening of issues or creating cliff-hangers at the end of issues. The small differences are mostly an occasional piece of dialogue removed and the major differences mostly revolve around one character, Halliday. Her introduction with Hicks is completely removed and she’s killed much earlier than in the script.

I was a little disappointed her introduction was removed as it actually featured some nice world-building and background on Anchorpoint station that I don’t feel came across properly in the comic. The idea that Anchorpoint as some rundown, incomplete, inconsequential and nearly abandoned station wasn’t really conveyed in the artwork and is barely mentioned. I really missed this specific element of world-building.

World-building is something I had issues with in this particular series and it opens on that problem. I was pretty disappointed that William Gibson’s Alien 3 went with the Union of Progressive People’s Interceptor being a UD-4L Cheyenne Dropship! Considering the UPP are supposed to be the very opposite of Weyland-Yutani and the Colonial Marines, it sets the series off on the wrong foot with them using the exact same design.

I understand this was actually a decision handed down to the creative team from Fox and I really believe it was the wrong choice. The differences between the factions should be reinforced through different technology, not shown to be the using the same. Personally, I’d imagined that the Interceptor would have been more similar to the Longswords from Halo. 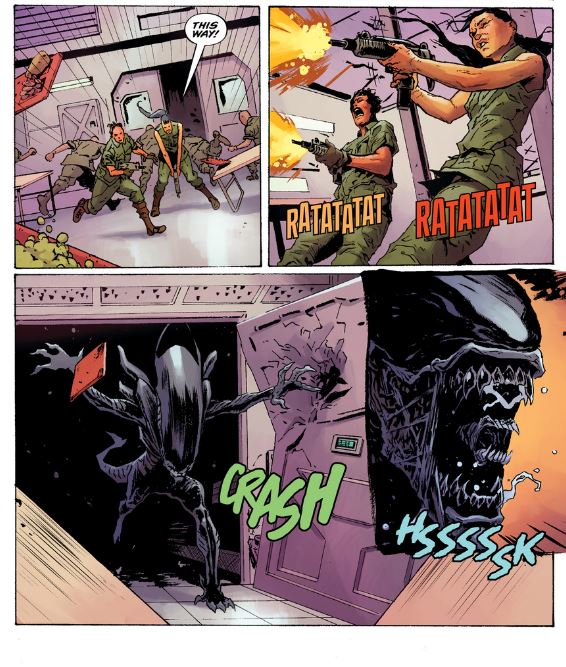 In terms of the world-building, something else I wasn’t too fond of was the weaponry used by the Union. The script describes them as using “Uzi-like guns” but this series gives us Uzis, not going that step further to give us new but Uzi-inspired weaponry like the Pulse Rifle’s Thompson heritage.

While I was disappointed with those elements, I absolutely loved finally getting to see the script visualized! It’s great to finally have some designs put to paper, such as the Rodina and Anchorpoint, and especially ones that look so visually interesting. I particularly loved seeing the Change finally realized in visual form and it looked brutal!

The Change was actually just one of quite a few stand-out sequences from the script that I just loved being able to finally see and should be a huge treat to those familiar with the script.  Johnnie Christmas also draws a phenomenal Lance Henriksen! I was really pleased with the likenesses of Michael Biehn and Carrie Henn, and especially Lance. His Bishop looked amazing!

Given how much Alien: Covenant seemed to recycle from Gibson’s concepts, I was slightly surprised to see Christmas didn’t go full circle and bring in elements of the Neomorph into the new Alien designs in this series or go a little wilder and make all the Aliens more distinctive from each other since none were supposed to be the exact same.

That’s not to say that’s a negative, though, as I’m very much pro-skull in the Alien design, so I was thoroughly satisfied to see the New Beast (or Hybrid as I believe Johnnie called it) with those eye sockets! Give me a skull and I’ll be a happy boy! What I wasn’t too sure on was colourist Tamra Bonvillain’s decision to include some very prominent red glowing eyes in those sockets when the New Beast reappears later after its birth. 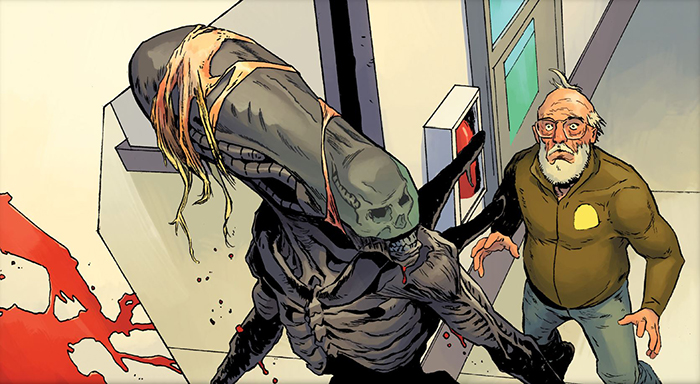 I really wasn’t a fan of the colour pallet that Bonvillain went with for William Gibson’s Alien 3. It reminded me more of Marvel colouring than it did something that fit into the Alien universe. Everything was too bright for my liking and after the fantastic work of Alien: Dead Orbit and Dust to Dust, it felt like a step-down.

After all is said and done, I’m still really satisfied that William Gibson’s Alien 3 got made. Johnnie Christmas delivers an incredibly faithful adaptation of William Gibson’s second draft of Alien 3. It was fantastic to finally get to see so many of these scenes and elements finally visualized.

It’s just a shame that there were design and colouring decisions in here that I don’t think worked well and were only a detriment to the series, especially when held up against some of the recent Dark Horse Alien series.

I really hope Dark Horse, Disney and Fox continue to adapt the unused Alien scripts (whether they be more Alien 3 or some unknown pitches for Alien vs. Predator or Alien 5 movies) and give us glimpses into the what-if’s of the Alien series.

If they’re as faithful to the original source material as Johnnie Christmas was, we’ll continue to be treated to accurate representations! I just hope that the next series goes for a visualize style that is more in line with the tone and feel of the Alien universe.