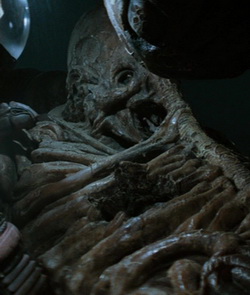 The Engineers, commonly known by fans as the Space Jockeys or Pilots, are a race of advanced extraterrestrial creatures that first appeared in Ridley Scott’s Alien film and then had a prominent role in his prequel Prometheus. They are our gods so to speak. They originally seeded life on Earth as well as lots of other planets.

The Engineers are about 9ft tall humanoid creatures with pale white/grey skin. Their eyes are completely black and they have no body hair at all. They are able to breathe oxygen just like human beings but was also able to survive breathing on LV-223’s surface. They are also are extremely strong given the fact one killed a group of crew members in Prometheus. At the start of Prometheus, one Engineer is seen wearing a hooded cape and the last surviving Engineer is wearing some kind of armour. The rest seen in holograms are wearing the biomechanical suit.

In Prometheus, it showed through holograms, that the Engineers worked together. The creatures are able to speak but in Prometheus, we never hear them talk. David the android tried communicating with them in what he believed to be their own language. The Engineer never spoke but instead killed the entire crew.

The Engineers are a technologically-advanced race of creatures. They are extremely advanced in genetic engineering and have built their own spacecrafts.

The Engineers are also able to use a biomechanical suit. It first appeared in Alien. The most distinguishing feature of the creature is its trunk which extends down its body. The fossilized creature can be seen sitting in front of a large telescope, which is the command of the ship. The Space Jockey seemed to be growing out of the chair behind the telescope – as if the creature and the chair had been fused together.

In Prometheus, through the holograms, we see the Engineers in these suits running from something. Towards the climax of the film, the surviving Engineer activates the ship’s controls and sits in front of a large telescope. The suit then covers his body as well as his face. It’s unknown why they need these suits. Prior to Prometheus, fans believed the trunk enabled them to breathe but in Prometheus, it is shown that they can breathe without it. The suits seem to be biomechanical in nature as the remains in both films seem to be fossilized.

The first spacecraft we see is at the start of Prometheus. An Engineer sacrifices himself to seed life on a planet. This new craft is circular in design, a lot like the typical flying saucers. It is assumed this ship belongs to the Engineers and it’s sort of a mothership. Then again, this scene in the movie must take place millions of years ago. Thus their technology could have changed a lot since then which leads onto the Derelict Spacecraft.

The derelict, which we saw in Alien, is a large, asymmetrical, wishbone-shaped spacecraft and it has three large entrances near ground level. Members of the Nostromo entered the ship through one of these when they investigated the ship. Inside of the ship, the passages look very organic and even xenomorph-like. The Space Jockey was sitting behind a huge telescope at the bridge of the ship. Then there’s the blue layer of light covering the Alien eggs in the cargo hold.

The wishbone-shaped craft made an appearance in Prometheus and it is nicknamed ‘Juggernaut’. The Prometheus crew investigate the inside of a huge structure which we find out later contains one of these spacecrafts. We learn a lot more about its technology. It features holographic equipment as well as an Ampule Chamber which contains a humanoid head with thousands of Urns containing the dark liquid. Later in the film, the Engineer takes control of the ship and flies it out of the structure. The Prometheus ship crashes into it causing it to crash back onto the planet. At the climax of the film, with the help of David, Shaw flies off in another wishbone-shaped craft.

The dark liquid plays a very big part in Prometheus. The opening scene takes place possibly thousands, maybe even millions of years ago with an Engineer sacrificing himself to seed life on a planet. He drinks the dark liquid and his body begins to break down on a cellular level. It is assumed that this planet is Earth but Ridley Scott stated in an interview that this could be any planet.

LV-223 is a military base and the Engineers set up this base to discover the true potential of the dark liquid. By this point, it’s clear from them murals that they have already created the xenomorph creatures. The Prometheus crew discover a dead Engineer and realise a few more had been killed by an event that happened to them 2000 years ago. It’s assumed that they somehow got infected by the dark liquid themselves. What we do know, is that the Engineers were planning to come to Earth to destroy us using the dark liquid to wipe us out. The crew explore the Ampule Chamber and discover thousands of these Urns which contain the dark liquid.

The dark liquid reacts when it comes into contact with organic matter. It tends to mutate things. The worms that were dragged in under David’s feet mutated into larger, hostile snake-like creatures nicknamed ‘Hammerpede‘. There are extremely dangerous, and have acid for blood. When Fifield chopped its head off, it simply regrew it straight away.

After chopping its head off, Fifield’s helmet became burnt and he fell into the dark liquid. He later appears at the Prometheus hanger bay and has been extremely mutated. He kills several crew members before being run over and burnt to death. The dark liquid seems to increase his strength and durability as he managed to survive being shot a few times.

Holloway was infected by David who slipped a droplet of the black liquid into his drink. He slowly begins to transform into something else, something different than that of Fifield. Before we could see what he transforms into, Vickers burns him to death to prevent the virus from infecting the ship.

He also infected Shaw when they had sex and impregnated her with a squid-like creature known as the Trilobite. This organism carries a single xenomorph embyro. In the climax of the film, Shaw explores the lifeboat and discovers that the Trilobite she gave birth to has grown exponentially. The Engineer finds Shaw and tries to kill her before the Trilobite attacks the Engineer and impregnates him. We see in the last scene of the film that a xenomorph (‘Deacon‘) explodes from his chest. The scene is similar to that of Alien 3 where there is no Chestburster stage. Presumably, the creature would grow much bigger given a bit more time.

The effects of the dark liquid seem to vary from creature to creature. It mutated the worms and Fifield but did something entirely different to the Sacrifice Engineer and Holloway. It’s still a bit of a mystery as to how the xenomorphs were originally created by the Engineers. Was it purely an accident? How else are these Trilobites created? In Prometheus, there seems to be a complex number of steps. Holloway was infected, who infected Shaw who gave birth to Trilobite who then infected an Engineer. There must be an easier way for the Engineers to create the xenomorphs. Something we haven’t seen yet.

History in the Films

In the year 2122, the Nostromo spacecraft answers a distress beacon on the planet LV-426. They go to investigate and find a huge wishbone-shaped spacecraft, which we call the Derelict Spacecraft. They explore the ship and discover a huge fossilized creature sitting behind a telescope. Its rib cage was bent outwards which meant a xenomorph creature had emerged from it. It’s not known what happened to this creature.

One of the crew members, Kane, is lowered into the ship’s cargo-hold and finds thousands of Alien Eggs covered in a blue layer of light. He inspects one of the Eggs, which then opens, and a Facehugger creature infects him. From what we know in Prometheus, the Engineers created the Xenomorphs using the dark liquid in order to use them as a weapon. As to how the Derelict crashed on LV-426, the reason remains a mystery. One theory is that craft was transporting the Alien Eggs somewhere and the ship was overrun with them. The Pilot Engineer then became infected by a Facehugger. It’s unknown if there were any more Engineers on the craft.

James Cameron’s Aliens takes place in the year 2179. Ripley, the last survivor of the Nostromo, is rescued 57 years later. She discovers that LV-426 is now home to a terraforming colony. She tries to warn the company of the xenomorph creatures and she gives them coordinates on the planet to check it out. In the Special Edition version of Aliens, we can see the Jordan family finding the Derelict Spacecraft. The mother and father go to investigate inside and return later, and he has a Facehugger wrapped around his head. It’s unknown what happens after that but the whole colony becomes infected leaving Rebecca Jordan the only survivor. At the climax of the film, the atmosphere processor explodes, possibly destroying the Derelict Spacecraft though this is not certain. The Derelict is never referenced in any Alien sequels. 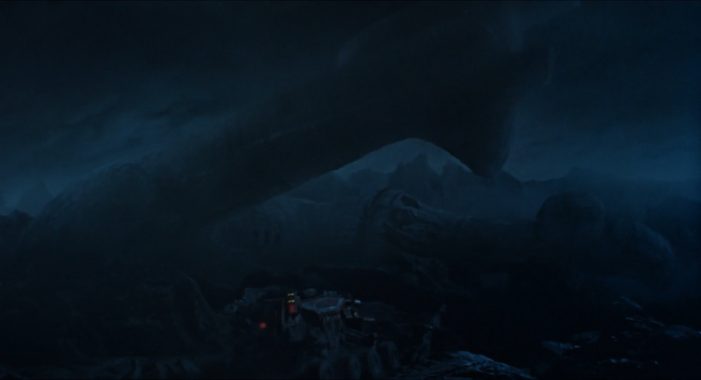 In Prometheus, the Engineers are central to the story. In the year 2089, Shaw and Holloway discover a starmap in a cave which leads them to a distant moon called LV-223. The Weyland Corporation funds the trip and sends a crew on a spacecraft called Prometheus. They awake in the year 2093 and the crew explore a huge structure on the planet, and find the dark liquid. Later in the film, the crew awaken the last surviving Engineer and the creature kills the crew. He activates his ship and sets its course for Earth to complete his mission. The Prometheus ship crashes into the ‘Juggernaut’ ship in an effort to stop it and the Juggernaut crashes back onto the planet. Shaw and David take another Engineer spaceship in a bid to find out who the Engineers were and why they wanted to destroy us.

In a viral video for Alien Covenant called The Crossing, Shaw repairs David and they set a course for the Engineer homeworld, also known as Planet 4. Shaw enters hypersleep while David prepares for their arrival, learning about the Engineers. In a flashback scene in the film, David arrives at an Engineer city and docks the ship in the middle of the city while thousands of Engineers on the surface watch on. He then drops thousands of canisters containing the black liquid over the Engineers which breakdown their bodies on a cellular level, killing them all.