Alien Covenant is the sequel to 2012’s Prometheus and prequel to 1979’s Alien, and was directed by Ridley Scott. The script was written by Jack Paglen and later rewritten by Michael Green and John Logan. In September 2015, Ridley Scott announced that the title of Prometheus 2 was Alien: Paradise Lost but in November 2015, Fox announced the title as Alien Covenant. In February 2015, Fox had changed the release date to August 4, 2017. In November 2016, the studio changed the release date again to May 19, 2017. 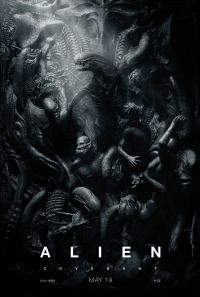 The crew of the colony ship Covenant, bound for a remote planet on the far side of the galaxy, discovers what they think is an uncharted paradise, but is actually a dark, dangerous world. When they uncover a threat beyond their imagination, they must attempt a harrowing escape.

There were rumblings for a few years after Prometheus was released that Ridley Scott was going to make Prometheus 2. Michael Fassbender and Noomi Rapace had made comments here and there they were going to return to do it. It was rumoured that 20th Century Fox were finding it difficult coming up with a story to continue with Noomi Rapace’s Shaw character. Writer Jack Paglen penned the sequel and by March 2014, it was reported that writer Michael Green (Green Lantern) had been brought aboard to re-write his original draft for Prometheus 2. John Logan was then brought on to rewrite the script again.

The story of Alien: Covenant was said to see Shaw and David go to the Engineer’s homeworld and find out why and how they created the xenomorphs. The story was said to connections to Ripley and Giger’s original xenomorph would return. In November 2015, Fox released the plot synopsis for the Prometheus sequel, now titled Alien Covenant. Covenant is the name of a colony ship that comes across a planet that contains David as its only inhabitant. The events in Alien Covenant take place 10 years after what happened in Prometheus. Michael Fassbender will be playing two androids – David on the planet and Walter who is part of the Covenant crew. The original title was confirmed to be Alien: Paradise Lost which was a reference to the Engineer’s planet – Paradise. A few months later, 20th Century Fox announced the film’s title as Alien: Covenant. 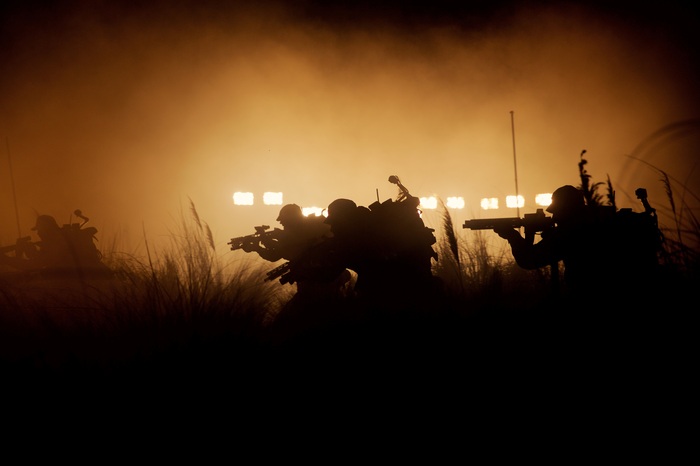 In February 2013, Noomi Rapace stated they she’d like to return for a sequel if they find the right story. In November 2014, Ridley Scott confirmed that Noomi Rapace would be returning briefly. In December 2015 it was announced that Katherine Waterston had been cast as a lead character named Daniels. In February 2016, it was reported that Danny McBride is in talks for a role in Alien Covenant. It was also reported that Demian Bichir would be joining the cast as the head of ship security.

Deadline reported that Amy Seimetz, Carmen Ejogo, Jussie Smolett and Callie Hernandez had been cast. By the end of February, Australian actors Alex England and Benjamin Rigby had also been cast. It was also reported that Bill Crudup was in negotiations to play a role. Guy Pearce also returns as Peter Weyland from Prometheus in a flashback sequence. In December 2016, we exclusively reported that James Franco will have a minor role in Alien Covenant.

Alien: Covenant filmed in Sydney, Australia and Milford Sound in New Zealand in late March 2016/early April 2016. It was revealed that Michael Fassbender would be filming for 16 weeks.

“Shooting will be a mix of location and studio shoots with location requiting “monumental forest and monumental rock and the rest will be in the studio with fairly formidable CGI. The Martian was made for the most part 94 pecent in a Budapest studio. With green screen I now can’t tell what was studio and what was shot in Wadi Rum.” Ridley Scott

At the end of March, the first on location pictures in South New Zealand were released online, showing set construction at the foot of Mitre Peak. In May 2016, the first official behind-the-scenes picture was released showing Katherine Waterston as Daniels sitting in a ship. After nearly three months of shooting, Alien Covenant officially wrapped in July 2016. 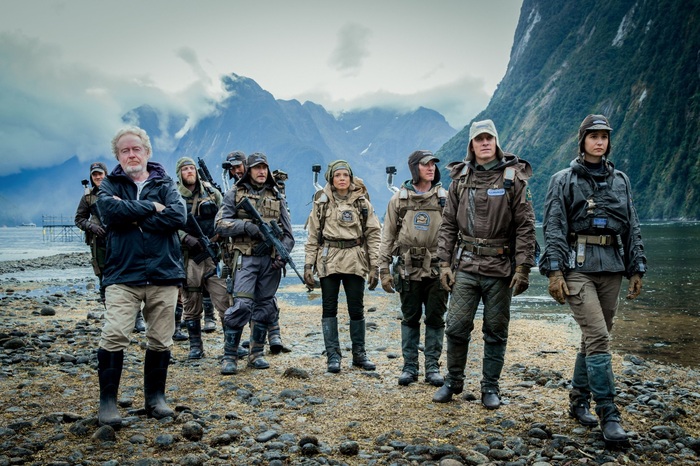 Alien Covenant will not feature any of the creatures we saw in Prometheus. Instead, we’ll get new versions of the Xenomorphs we know and love but the old classic Xenomorph will still appear too. In October 2016, AvPGalaxy posted an exclusive report regarding the new creatures – the Neomorphs that will feature in Alien Covenant. These Aliens are the result of the local ecosystem being mutated by the black liquid. Over time, pods started to grow on the trees and the ground, and release a spore when disturbed. The Neomorphs have a white colouration, with a pointed head and two dorsal spines. Upon birth, the Neomorphs move on all fours similar to the Bambi-burster from Alien 3.

A few days after our report, various images of the new creatures leaked out showing various forms of a Xenomorph, a Facehugger and Alien Eggs. These are supposed to be precursors to the classic Xenomorphs that appeared in the Alien series.

Ridley Scott confirmed in January 2016 that Alien Covenant will be aiming for a ‘Hard R’ rating. Prometheus was also R-Rated though it was a very tame R Rating compared to other Alien movies. In April 2017, Alien Covenant was officially given a R rating and later rated a 15 in the UK.

20th Century Fox released the first trailer for Alien Covenant on Christmas Day. In February 2017, Fox released Alien Covenant Prologue Last Supper which is a scene that won’t appear in the final movie. The final Alien Covenant trailer was released at the end of February. A few days later the red-band version was released with some minor differences. A viral video were released in March revolving around Walter, the new android from Weyland-Yutani. As part of Alien Day, cinemas were showing Prometheus and Alien as part of a double bill and at the end there was some exclusive footage from Alien Covenant.

The ‘backburster’ sequence was shown as well as a new prologue scene featuring Noomi Rapace and Michael Fassbender showing what happened to them between Prometheus and Alien Covenant. A new clip was released in May 2017 – Tracking the Xenomorph which shows the characters trying to find the Xenomorph in the shafts as well My Face – the crew’s encounter with a Facehugger. Just before Alien Covenant’s release, HBO aired a Making Of feature giving us a look at the set design and special effects.

Alien Covenant was released in a few countries a week earlier than in the U.S. and took $42 million in 34 countries overseas in its first weekend. A week later on May 19th, it opened in the United States with a weekend gross of $36 million, slightly below its $40 million projection. On the Friday, it opened with $15.3 million in 3716 theatres including $4.2 million from Thursday night previews with $36 million for the entire weekend. In comparison, Prometheus opened back in 2012 with $51 million in its opening weekend so we have a $15 million drop.

It also opened in a further 52 new countries making an additional $30.3 million overseas. In its second weekend domestically, its takings dropped by a massive 80% and only made $13 million while overseas, it earned another $10 million. The domestic total so far is $67,219,484 while overseas stands at $106,615,130. The total worldwide takings are $174 million. 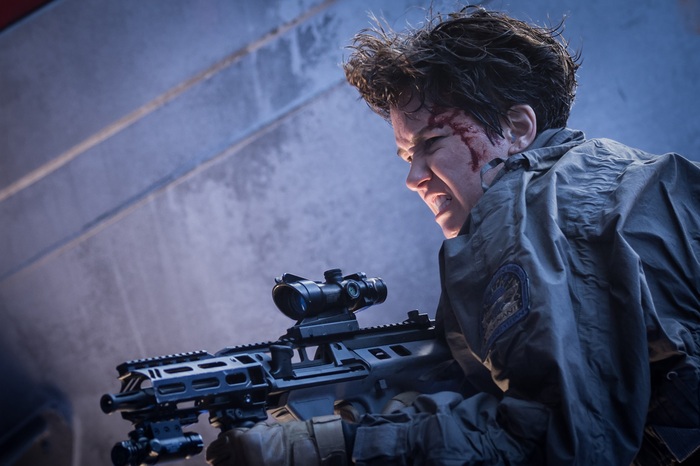 Alien Covenant has a 71% ‘Fresh’ rating on Rotten Tomatoes based on 285 reviews. Many of the reviews praised the cast, locations, sets, visual style and terror while some of the criticism was directed at the pacing of the final act when the Xenomorph we know and love appears. A few of the reviews also lament the use of CGI for the Neomorphs and Xenomorph as opposed to using good old-fashioned practical effects. Though the consensus is that Alien Covenant is a more enjoyable movie than Prometheus.

Alien Covenant is due to be released on DVD, Blu-Ray and Ultra HD formats around August/September time. No official details have been given yet but an exclusive Steelbook set will be released as well as new Blu-Ray boxsets featuring all six Alien movies.

An Alien Covenant novelization written by veteran Alan Dean Foster was released in May 2017. Two behind-the-scenes books were released in June 2017 called “Alien Covenant Collector’s Edition” from Titan Books and “The Art and Making of Alien Covenant” from Simon Ward. In terms of action figures, NECA released the Neomorph and Xenomorph figures as well as an Accessory Pack in June 2017.

Ridley Scott has repeatedly said that he wanted to make at least two more Alien sequels. In March 2017, he said Alien Covenant 2 was already written and ready to go. In May 2017, Scott said the film was ready to shoot within 14 months. The film’s title may be “Alien: Awakening” as Scott made reference to the title in some reports though in other reports he referred to Blomkamp’s Alien project as Awakening too.

You can find more images on Alien Covenant Production Stills.

You can find more images on Alien Covenant Concept Art.

You can full the full news archive for Alien: Covenant here.