Alien: Blackout is a 2019 survival horror mobile game from FoxNext Games released for IOS and Android on January 24th. It was developed by Rival Games and Theory Interactive and follows on from the story from 2014’s Alien Isolation game with Amanda Ripley set between Alien and Aliens. The game was fairly well-received among the online press but was received negatively by fans as Fox marketed the game as an Alien Isolation sequel. 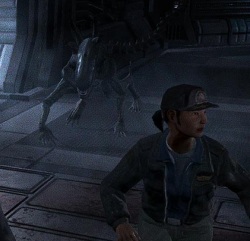 The game is set in December 2137 and follows Amanda Ripley after the events of Alien Isolation. Members of the Mendel Station found Amanda floating in space and put her in hypersleep. When she awakes, the staff are all dead and xenomorphs have infested the station. Crew of the USCSS Haldin dock at the station for repairs and Amanda must guide them through Mendel Station using surveillance cameras to avoid the xenomorph. After she escapes with the crew, she says that Mendel Station has been destroyed and she is now travelling to KOI-125-01, a manufacturing colony.

The player can control the station using a holographic pad which she uses to guide the crew around. If a xenomorph detects your presence , the room can be sealed by cutting off the power. The xenomorph can react to things like doors opening and closing as well as noise from the crew. 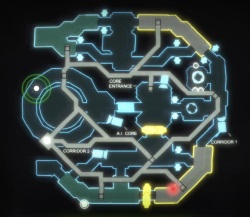 The terror of Alien is brought to life in Alien: Blackout. Try to stay alive while trapped aboard a crippled Weyland-Yutani space station carrying a deadly Xenomorph as it tirelessly hunts you and the crew. Outsmart the perfect hunter by making perilous choices. Players must rely on the damaged controls of the space station or risk sacrificing crew members to avoid deadly contact, permanently altering the outcome of the game.

Survive seven fear-inducing levels by remotely guiding Amanda Ripley’s crew through increasingly challenging tasks using only the station’s emergency systems. The uncertainty and unpredictability of both the alien and her crew can impose total defeat for Amanda and the entire station.

Alien: Blackout is a unique fear-inducing horror mobile game experience that will test the inner nerves of both Alien and horror fans alike, where life can end in an instant.

The idea for Alien: Blackout came from when Senior D3 Go Producer Josh Austin watched Alien Covenant. At the end of the film when David is controlling the ship’s doors through the cameras trapping the xenomorph, it gave him the idea for the game. Developer Rival Games also had a similar idea and Rival had been talking to Fox about it. Fox then approached D3 Go to publish it. The game’s assets were built from the ground up but the developers used Alien and Alien Isolation as reference. Andrea Deck who voiced Amanda Ripley in Alien Isolation also signed on to voice the character in Alien: Blackout too. The game took less than a year to make from pre-production to post. 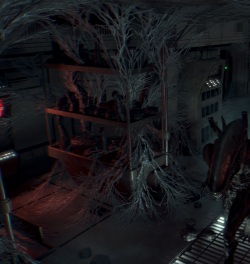 Alien: Blackout was formally announced on January 7, 2019 as a survival horror mobile game from FoxNext Games. There was a significant amount of controversy surrounding Alien: Blackout when it was announced. When Fox first announced there would be an Alien Isolation sequel, fans expected another survival shooter for PC and consoles. The upcoming Alien shooter from Cold Iron Studios had been teased in the months prior to this so fans expected Alien: Blackout to be this title.

When Fox finally did announce the game, there was a considerable backlash from fans when they found out it was a mobile game. Fox later clarified that Alien: Blackout is a standalone game that has Amanda Ripley as the character but is not a sequel to Alien Isolation.

The game had a price of $/£4.99 upon it’s release with no microtransactions. Players could download it for free on both platforms on April 26, 2020 for Alien Day 2020.

Among the online press, Alien: Blackout received mixed to positive reviews. VultureBeat gave it 95/100 saying: “Alien: Blackout is an amazing hour or two of horror-puzzle entertainment. Grab a pair of headphones, cozy up in a dark corner somewhere, and toss five bucks at this game already.” IGN scored it 6.3/10 saying there isn’t much replay value but liked that there were no microtransactions: “Alien: Blackout successfully follows the Five Nights at Freddy’s formula with an authentic Alien style but has weak AI and is very short-lived.”

DenOfGeek scored it 4.5/5 praising the gameplay, graphics and sound but said there isn’t much replay value: “The Five Nights at Freddy’s comparison is unavoidable, but it’s arguable that Blackout pulls off the security-cam horror gimmick more effectively. For the price, it’s hard to complain about a game so polished and fun.” Our own Corporal Hicks at AvPGalaxy gave it 7/10 praising the graphics and sound: “When all is said and done, this is another piece of Alien property that I can feel the love and care of the developers in it and to me that says so much. Alien: Blackout is another lovelingly crafted slice of the Alien universe and the Alien experience, this one just happens to fit right in your pocket. “