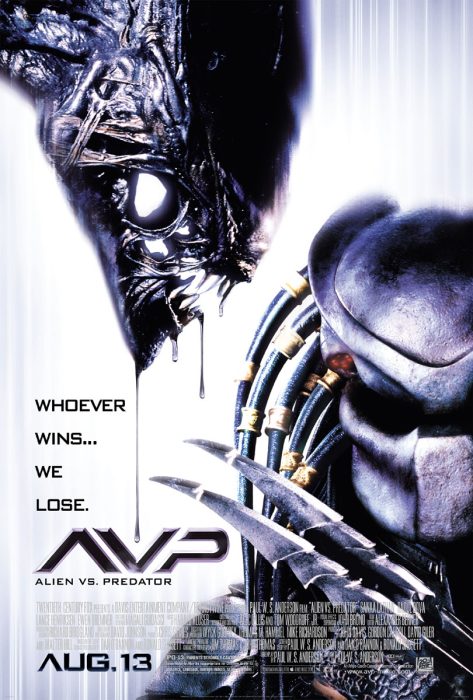 The Predators use Earth for their rituals and every 1000 years, they drop five teenage predators off at a pyramid and they have to fight for their survival. If they survive the battle against the aliens, they earn their “warrior status”. The film is set in the present time at the beginning of the 21st century and a group of scientists and archaeologists travel to Antarctica and discover ancient pyramid ruins.

These ruins are deep under the ice surface which were built by the Predators and were formed much earlier than the pyramid ruins in Egypt. When the group reaches one of the pyramids in Antarctica, they discover human skeletons and the fossilized remains of Facehuggers and Chestbursters. They also find out that these aliens might be still alive somewhere in the pyramid ruins but unknown to them, there’s also another species of alien exploring there – the Predators.

Aliens vs Predator first appeared in comic book form in 1989 and was quite successful in the 90s. We then got a glimpse of an alien skull in the trophy room in Predator 2 in 1990 which fuelled rumours of a crossover film. Screenwriter Peter Briggs wrote an AvP screenplay based on the comic books in the early 90s and submitted it to 20th Century Fox who were cautious to move forward with the project. You can read more about this part of the film’s history in The Hunt Begins: The Early Days of Peter Briggs’ Alien vs. Predator. In 1999, a game called Aliens vs Predator was released for PC followed by its sequel Aliens vs Predator 2 in 2001. Both games were quite well-received by critics and fans alike.

In 2002, another Aliens vs Predator treatment was written by James DeMonaco and Kevin Fox which followed the storyline of the comic series, AvP: Eternal. It was rejected by producer John Davis as he wanted the film to take place on Earth. Paul W.S. Anderson approached 20th Century Fox and pitched a story for the film which he had been working on for several years. He asked designer Patrick Tatopoulos to create some concept art pieces to use in his presentation, and paid for them out of his own pocket. Producer John Davis was impressed with Anderson’s pitch and the project was greenlit. 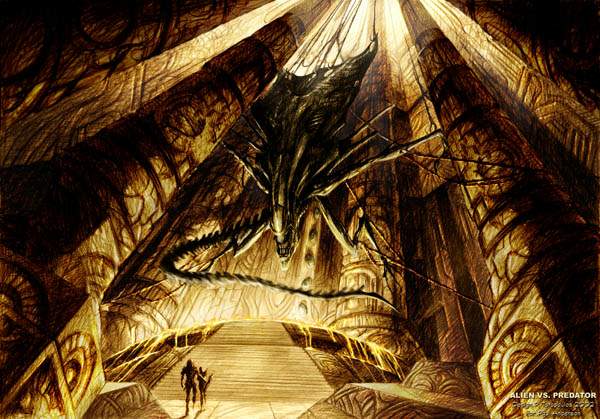 After Paul Anderson had finished Resident Evil Apocalypse, he began working on the Alien vs Predator script. Shane Salerno was brought in and spent six months re-writing Anderson’s script and stayed on throughout production making changes as necessary. It’s unknown what changes Salerno made but some of Anderson’s early ideas had been scrapped. Originally there was going to be five predators but this was cut down to three. The story was also going to revolve around the humans luring the predators to the pyramid with alien eggs.

Much of Anderson’s story was based around the work of Erich von Däniken – that early civilizations built pyramids with the help of an alien race. In the film, it was said that the predators helped humans to build pyramids and they used Earth as a rite of passage every 100 years. Anderson added plenty of comic book references in the script and the story was also inspired by H. P. Lovecraft’s 1931 novella At the Mountains of Madness. As the film takes place in the present day, Paul W.S. Anderson made it clear that he didn’t want to contradict the previous Alien films so the story takes place on the Norwegian Antarctic island of Bouvet, far away from any civilization.

20th Century Fox had give Paul W.S. Anderson a budget of around $60M. The Czech Republic capital Prague was chosen as the filming location for much of Alien vs Predator as the production costs would be much lower. Anderson stated that to build the sets in Los Angeles, it would have cost $20M but in Prague, the cost was only $2M. Production designer Richard Bridgland was in charge of creating sets, props and vehicles using Anderson’s early concept art as a guide. Around 30 sets were created in Prague including pyramid interiors which incorporated hieroglyphs based on ancient civilizations.

Miniature sets were created that were a third in scale in order to give a more realistic effect instead of relying on CGI and over 700 bags of artificial snow was used on the sets to add to the illusion that they were in Antarctica. A miniature version of the icebreaker ship was created costing $37,000 and it took 10 weeks to construct. The whaling station was a 25-meter miniature set that took several months to create and it was designed so it could collapse and then be re-constructed. This was beneficial for additional reshoots. 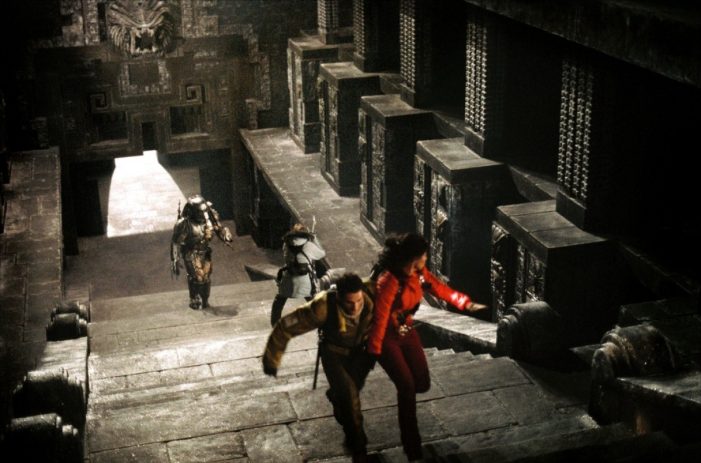 Special effects company, Amalgamated Dynamics (A.D.I.) were hired to do the creature effects. Founders Tom Woodruff and Alec Gillis, previously did the effects on Alien 3 and Alien Resurrection, and worked on Aliens under Stan Winston. A.D.I. Spent five months designing the creatures and creating costumes. Particularly, the predators’ wristblades were made five times longer than in Predator, and the shoulder cannon had been made bigger. Different predator masks were created, as such to differentiate between them.

They were made from clay which was used to form molds in order to create fibreglass copies, and then they were painted. A full hydraulic alien puppet was created so movements could be made faster and give the alien a sleek appearance. It required six people to operate it, three for the head and body, two for the arms and another person making sure the signals reached the computer. The hydraulic puppet was used in six shots in Alien vs Predator, including the main alien-predator fight sequence. Two separate puppets were created for the Alien Queen, a 4.8 meter practical version which required 12 puppeteers to operate, and a 1.2 meter puppet. 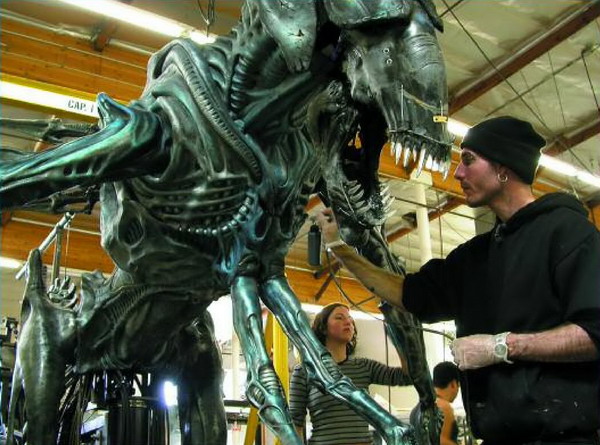 The first person cast in the film was veteran actor Lance Henriksen who is no stranger to the Alien series. He appears in Aliens and Alien 3 as Bishop the android. Even though those films take place 150 years in the future, Paul Anderson wanted a familiar actor for continuity. Henriksen plays Charles Bishop Weyland who funds the expedition to Antarctica. Clearly, there’s a tie-in to Weyland-Yutani, known as ‘the company’ in the Alien franchise and it’s assumed that the company based its androids on its founder Charles Weyland. 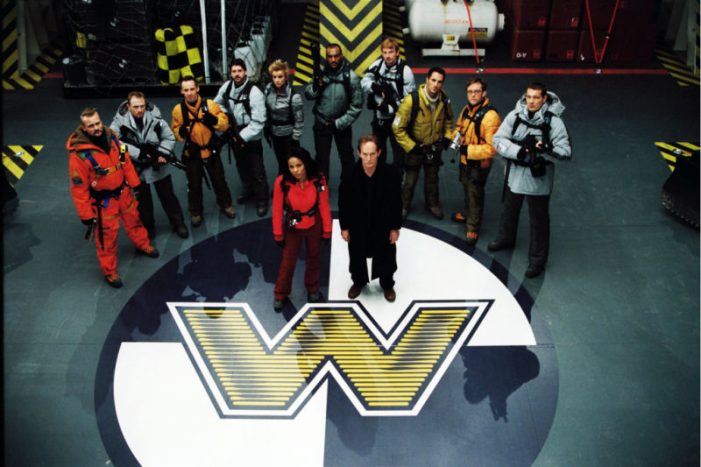 The Cast of AvP

Anderson wanted generally unknown actors for Alien vs Predator, like Ridley Scott opted for in Alien. Most of the cast are of European origin including Italian actor Raoul Bova, Scottish actor Ewen Bremner and English actor Colin Salmon. Hundreds of actresses attended the audition for the lead role of Alexa but it eventually went to Sanaa Lathan who flew to Prague to begin filming only one week after been cast.

Another actor rumoured for a role was Arnold Schwarzenegger who was going to have a cameo appearance as Dutch from Predator. He was going to appear in a chopper at the end of Alien vs Predator, and pick up Lex in Antarctica. Schwarzenegger said he would only appear if he lost the California governor election and that it would have to be filmed at his residence. As he got elected governor, the cameo never happened. Sigourney Weaver (Ripley from the Alien series) was never approached for a cameo appearance as she was against the idea of a crossover film for many years.

Ian Whyte, who stands at 7’1″, plays the lead predator known as the Scar Predator. Ian Whyte also went onto play the predator in the sequel AvP Requiem and later the engineer in Prometheus. The other two predators, Celtic and Chopper, are played by much shorter Czech actors. A.D.I. founder Tom Woodruff plays the Grid Alien.

Visual effects producers Arthur Windus and John Bruno were in charge of that area and Alien vs Predator contained 400 effects shots. CGI was generally kept to a minimum as Anderson said actors in suits looked scarier than CGI monsters. For the full-body movement shots, a CGI Alien Queen was created and a CGI tail was give to the practical version as it was difficult to create by puppetry alone. The movie’s score was created by Austrian composer Harold Kloser who also did the score for The Day After Tomorrow. Anderson chose him because he was a fan of both franchises. The score was recorded in London and was entirely orchestral. 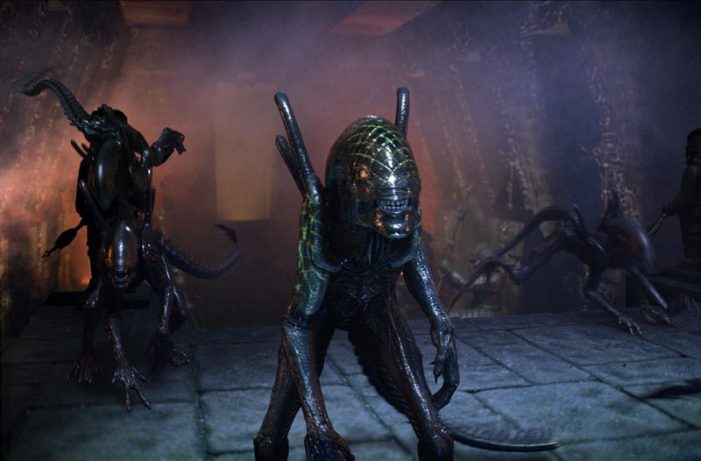 Alien vs Predator was released in the US on August 12, 2004, opening in 3395 theatres and grossing $38.2M in its opening weekend, entering at number one on the box office. It spent 16 weeks in cinemas  and its final North American gross was $80,281,096. It didn’t open in the majority of international territories until two to three months later. In the UK, it was released October 22, 2004 and grossed $9M. The total international gross was $92,262,423 giving it a combined worldwide gross of $172,543,519. Alien vs Predator is the highest grossing Alien / Predator film of all time, assuming we don’t consider Prometheus. 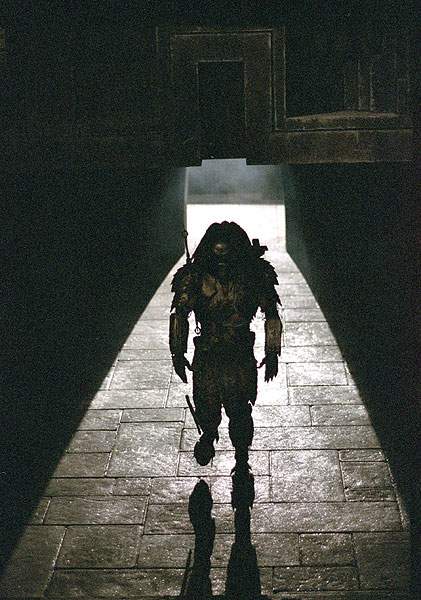 Prior to the film’s official release, the movie wasn’t screened in advance to critics and when they saw it, the reviews were mostly negative. Out of 141 reviews, Alien vs Predator currently holds a 21% rotten rating on RottenTomatos. The main criticism was aimed at the poor dialogue, characters, the PG-13 rating and the quick-cut editing. The positives were aimed the creature special effects and set designs.

Alien and Predator fans, much like critics, disliked the film. A lot of criticism was aimed at the bulky predator costumes and how Scar Predator’s facial design looked fake when he removed his mask. The PG13 rating was a huge criticism as Anderson had led everybody to believe the film would be R-Rated. He confirmed in October 2004, that Alien vs Predator was always going to be PG13 and that no footage had been cut out to get the rating. Despite this, 20th Century Fox later released an Unrated cut the following year. Another criticism was aimed at the human-predator team-up at the climax of the film

Alien vs Predator was released on DVD in North America on January 25, 2005. It featured two audio commentaries. The first with Paul W. S. Anderson, Lance Henriksen, and Sanaa Lathan, while the second included special effects supervisor John Bruno and ADI founders Alec Gillis and Tom Woodruff. There was also a 25-minute Making Of featurette, a Dark Horse cover gallery and three deleted scenes. The DVD debuted at number one on the DVD sales and rental charts upon its release. On March 7, 2005, 20th Century Fox released a two-disc ‘Extreme Edition’ DVD set. This featured many featurettes covering the conception, pre-production, production, post-production and licensing of the film.

On November 22, 2005, Fox released a new Unrated DVD for the US market which contained 8 minutes of additional footage and CGI blood was added to the kill scenes. Alien vs Predator was released on Blu-Ray in North America on January 23, 2007 and in the UK on April 9, 2007. The film has been released in numerous special boxsets including the AvP Monster Box (April 2005 – Japan), the Predator Deluxe Head Set (December 2006 – UK) and the AvP: The Ultimate Showdown DVD Collector’s Set (November 2007 – US).

You can find more images on AvP Movie Concept Art.