Before the series’s release, I got the chance to interview the staff of Inkworks about their then upcoming trading card series based on the film, Alien vs Predator. The interview talks about how they design the set, how they got chosen to publish the set and other such questions. 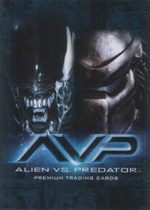 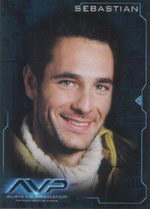 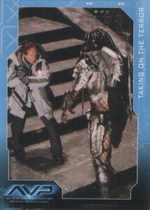 Corporal Hicks – This trading card set isn’t the first you’ve done for an Alien film, tell us about your other sets.

Inkworks – You are correct. Inkworks released Alien Legacy: Twentieth Anniversary Edition Premium Trading Card in December 1998. The release featured four films – Alien, Aliens, Alien3 and Alien Resurrection in one trading card set. It was the first time that trading cards were licensed for the entire series of movies.

Corporal Hicks – How did you actually get picked to do the trading cards for Alien vs Predator?

Inkworks – There are many factors that go into a studio’s decision to pick a particular licensee. We believe that our relationships in the industry, the quality of our products and our commitment to trading card collectors and the hobby are all important factors in our favor.

Corporal Hicks – How do you pick which scenes you are going to do cards on?

Inkworks – We do our best to select scenes and images that are both important points in the film as well as ones that will work visually on a trading card. Sometimes a particular effect or scene may look good on film, but doesn’t translate well to a still image that is trading card size. Most of the time, however, we are successful in capturing many of the moments that make the film memorable for the fans.

Corporal Hicks – How involved in the project is fox?

Inkworks – This project is very much a team effort. They work with us on every image and the copy that is printed on every card.

Corporal Hicks – Does fox give you certain stills to do scenes of or do you get to actually see the movie and choice the still?

Inkworks – We don’t get the opportunity to view the film before it is released. They do, however, provide us with images and photos from the set that we can use in the creation of the set.

Corporal Hicks – Tell us about the new set

Inkworks – For anyone who is a fan of Alien vs. Predator, this is a great set. It is packed with images from the film, behind-the-scenes photos,information and images that you won’t find anywhere else. Bonus cards include autographs of many of the stars of the movie, Pieceworks costume cards which contain actual pieces of several costumes from the film, individually hand-drawn sketch cards, and much more.

Corporal Hicks – The artists who draw the special cards, how are they chosen?

Inkworks – There were three artists who drew Alien vs. Predator sketch cards for us: Tone Rodriguez, William O’Neill and Joel Gomez. These artists are familiar to many comic book fans and have had experience creating sketch cards for trading card sets. We wanted artists who were going to go the extra mile to provide cards that would appeal to collectors and AVP fans. Each one is a work of art.

Corporal Hicks – Do you guys actually meet up with the actor when they sign the cards? If so what are they like?

Inkworks – Typically, we do not meet up with the actors when they sign the cards because they may be anywhere in the world at the time. However, we have met some of the actors from Alien vs. Predator. Sanaa Lathan and Lance Henriksen both appeared in the Inkworks booth at this summer’s San Diego Comic Con to meet fans and sign autographs. The actors have been very supportive of the film and our product.

Corporal Hicks – When is this set due out?

Inkworks – Alien vs. Predator trading cards were released on August 4th, so that fans can get a sneak peek at some of the scenes from the movie.

Corporal Hicks – If Fox choose to do more films in either of the three series, will you be doing the trading cards for them?

Inkworks – We hope so, but each movie is licensed as it comes out and we won’t know until they tell us that they plan to license trading card and, if they do, if we have been granted the license to produce them. Obviously, strong sales and a good reaction from fans in response to this set will help