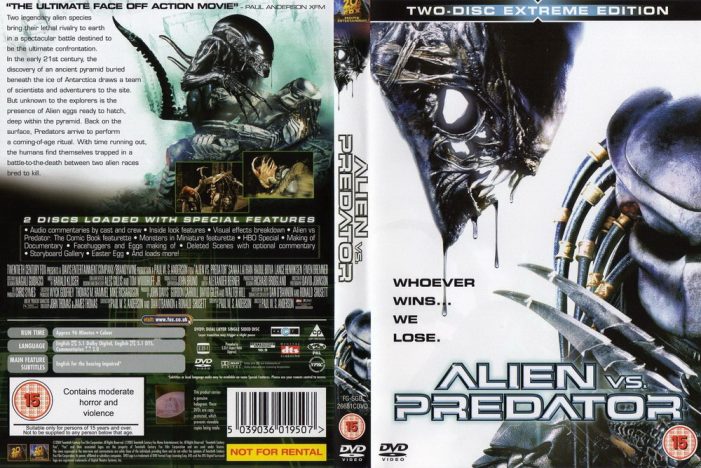 This is a review of the AvP Extreme Edition Region 2 DVD that was released in March 2005.

So it’s been almost two years since the film came out and I haven’t seen AvP since I first saw it in August 2004. I never intended to buy the DVD either but as time went on, I eventually bought it in June 2006 to watch it again. I bought it on Ebay for only £3 so I didn’t lose much money on it. :)

Well, by now, I think everybody knows what I think about AvP. I pretty much hated it when I first saw it but I guess the saying “time heals old wounds” is somewhat true. I still don’t like AvP but it’s a little more bearable watching it on DVD. The DVD also features the theatrical version and a “new” extended cut of AvP. Essentially, all it is, is an extra minute and half at the beginning of the movie which adds a new scene set in 1906 Antarctica with a whaler  being chased by a Predator. It’s actually a nice scene too and I kinda wish they’d have left that in the theatrical version. There’s some things I liked in AvP but for every one thing I liked, there’s about fifty things I didn’t like.

The most obvious negative is the PG13 certificate as any fan will tell you. But even if AvP was rated R, it wouldn’t make any difference because the script had been written as a PG13 film. Speaking of which, it was a very bad script, bad dialogue, acting wasn’t great either. There’s also countless Alien and Predator-related problems as well. Such as the fact the alien life cycle was sped up and the Predators were portrayed pretty weak. Like the team-up at the end. Not to mention their poor facial designs. On the plus side, the visual effects were great for the most part. The CGI Queen looked great as it was running though the CGI aliens could have been better. The main Alien-Predator fight sequence was great to watch. AvP probably isn’t that bad to non Alien / Predator fans but to those who are fans of the originals, this is a fairly disappointing film. There was just so much potential wasted.

AvP is presented in a 2.35:1 anamorphic transfer. As expected, the picture quality is excellent despite the fact most of the film is shot in darkness. The film does look very nice on DVD in terms of all the set pieces etc.

Like the picture quality, the sound is excellent too. The film is presented in either Dolby Digital or DTS 5.1. Dialogue is crystal clear and has a lot of nice surround sound effects.

-Commentary with Paul Anderson, Lance Henriksen & Sanaa Lathan
The first commentary on the DVD features director Paul Anderson, Lance Henriksen and Sanaa Lathan. To be honest, I think it was a wasted opportunity for Paul Anderson. I was sort of hoping that he would answer some of the questions (and criticism) that has left a lot of fans wondering since they saw the film. He did answer some questions although even still managed to surprise me with some of his comments. For somebody who claims to be a “fan” of the previous Predator movies, he doesn’t seem to know an awful lot about them. One comment in particular, I noted. He claims that the Predators in the previous two movies were in fact children, despite the fact they were way more experienced than those in AvP. It’s funny how he seems to have an excuse for everything he did in the movie. 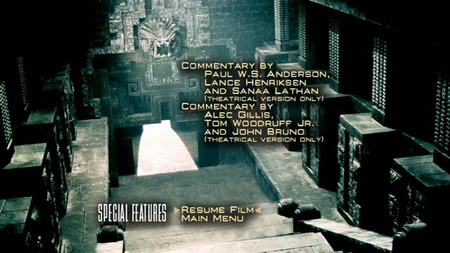 Another part of the commentary I found interesting was the lengths Anderson went to, to avoid telling us what the movie budget was. He did this before AvP came out too so I don’t really see what the big deal was. Lance Henriksen was a pointless addition to the commentary – mainly because he spent the entire commentary praising Paul Anderson and the film. Sanaa Lathan was okay, I guess. She was very inquisitive and got Paul Anderson talking a little more about things.

-Commentary with Special Effects Guys
The second commentary on the DVD features creature effects guys, Tom Woodruff and Alec Gillis and visual effects creator, John Bruno. It’s a lot more technical and informative than the first commentary but I guess if you don’t like the movie, you probably won’t sit through the commentary for another 90 minutes.

-‘Inside Look’ at the films ‘Hide And Seek’, ‘Elektra’ and ‘Robots’
This part contains three short featurettes about the films above. Can’t really comment on them. I’ve seen Hide and Seek and Elektra. I didn’t like either of them.

-DVD-ROM
If you put the DVD in a PC, you’ll be asked to install some software. After that, you’ll get to a menu with three flash presentations. The first one allows you to read all 27 pages of the first AvP comic book. The second presentation looks at the stages at making a comic through 10 pages and finally a preview of the graphic novel, AvP: Thrill of the Hunt which is 16 pages long.

Disc 2 is where all the main special features are located. The featurettes are split into five categories: Pre-Production, Production, Post-Production, Licensing the Franchise and Marketing.

-Conception
On the second disk, in the pre-production section, there’s a featurette covering how the idea for Alien vs Predator came about. It’s a 25 minute featurette and they talk about the AvP comics and about storyboards that were made for the film. 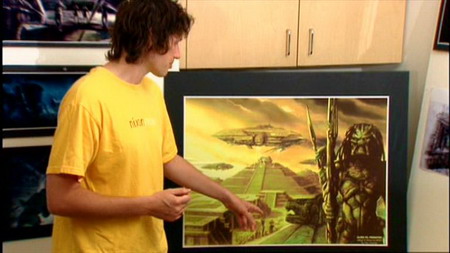 -ADI Workshop
This short 7-minute featurette takes place at ADI’s Workshop with Ian Whyte getting into the Predator suit and practising some scenes. There’s also some tests with the mechanical facehuggers and with the Predator’s shoulder cannon. We also see ADI’s team working on a lot of other things such as Predator equipment and the aliens’ tail and claws. 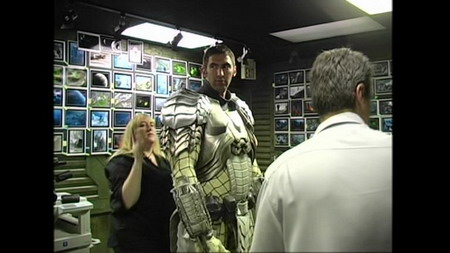 -Storyboard Gallery / Concept Art Gallery
The Storyboard Gallery features 75 storyboards from Brent Boates, 55 from Phill Norwood, 70 from Richard Bennett. I’d have to say Richard Benett had the most interesting storyboards out of the three. The Concept Art Gallery features another 29 images from Richard Bennett. Some of these images I’ve already seen from when they were first released online but there are quite a few interesting ones that cover a whole range of things. 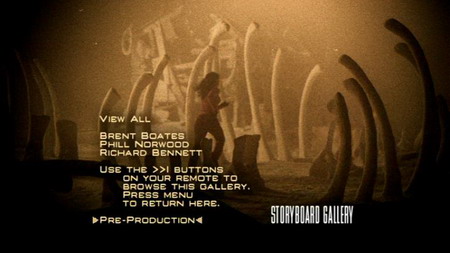 -The Making of AVP
This is the main featurette on the DVD which lasts for an hour. It covers pretty much everything related to the production of AvP in Prague with interviews with the cast and crew. We get to see how they made Prague look like Antartica and how they made the Aliens and Predator. 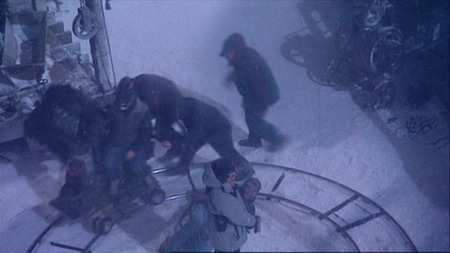 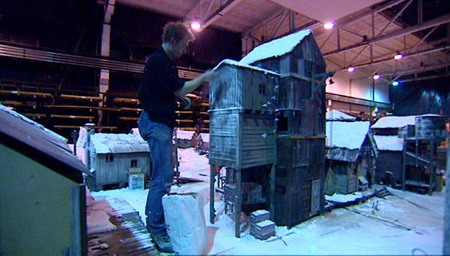 -Facehuggers & Eggs
This 15-minute featurette covers the Egg Chamber and the scene where Miller and Verheiden are cocooned. It was fairly interesting. We get to see how frustrating it was for the actors to do the scene. 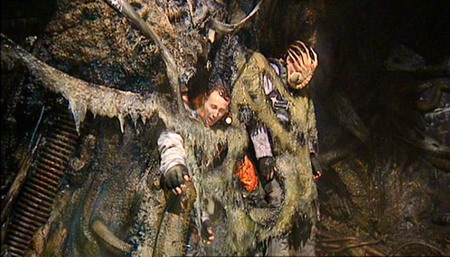 -Trouble at the Mouth of the Tunnel
This featurette is 4 minutes long and is about the scene where the sledge comes out of the tunnel at the end of the movie and the final explosion. The cinematographer says he didn’t expect the explosion to be as big as what it was and the set caught on fire. 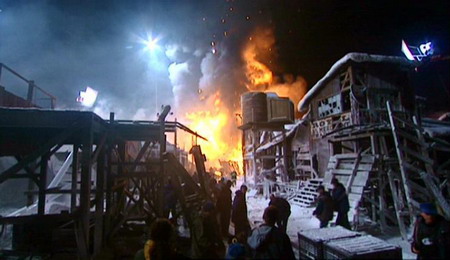 -VFX Breakdown
This 30-minute featurette covers all the visual effects is AvP with visual effects supervisor John Bruno taking us through them. The featurette talks about the CGI aliens and facehuggers including the matrix-style Facehugger shot. There’s also discussion about the Predator’s cloak and the new vision modes and how they accomplished it. The flash-back sequence is seen next and how they created the thousands of aliens on the pyramid. The final part of the featurette covers the CGI Queen. For the most part, this was an interesting featurette. I was always disappointed that they changed the original blue thermal vision mode on the Predator and John Bruno says it was changed simply to update it. It’s not really a valid reason for me. Nobody had any problems with the original one so it’s still a little confusing as to why they changed it. 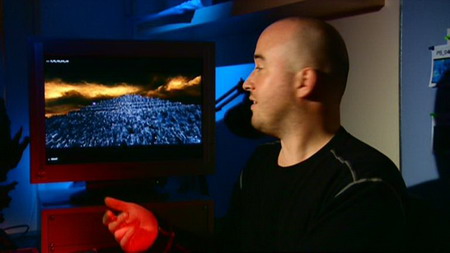 -11 Deleted Scenes
There’s 11 deleted scenes on the region 2 DVD and they are accompanied with a commentary from Paul Anderson and Lance Henriksen. I can see why most of them were cut but there are a couple of deleted scenes that would have benefited the film. For story-purposes. 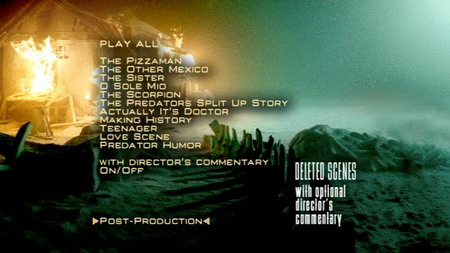 -Alien Vs Predator – The Comic Book
This featurette is about 11 minutes long and as you’ve probably guessed by the title, it covers the original A/P/AvP comics. Dark Horse, the publisher of the comics, talks about them and how they came about. They even mention the many number of elements from the original comic that were in AvP. It’s an interesting feature if you like comics but not for me.

-Monsters In Miniature By Todd McFarlane
This 13-minute featurette covers the Alien / Predator action figures by McFarlane. It goes behind-the-scenes on making the figures specifically for the AvP movie. Again, if you’re into figures, you’ll like this feature, but if you’re not, it’s pretty pointless.

-HBO Special: AVP Behind the Scenes
I remember watching the HBO Special just before AvP came out. It’s not bad but doesn’t tell us anything new if you’ve watched the Making Of featurette. It lasts for 13 minutes.

-Teaser & Theatrical Trailer
Finally, we have the teaser and theatrical trailer as standard. The teaser is 50 seconds and the trailer is almost two minutes long. 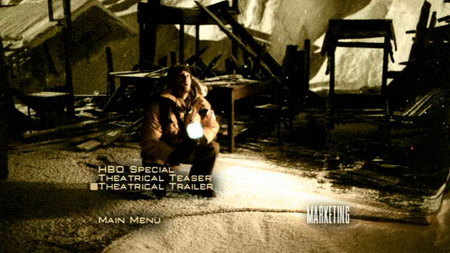 There’s no denying Fox produced a good DVD for this film. There’s plenty of special features. The picture and sound quality is great. The only problem is the film itself. I guess if you’re reading this review, then the chances are you’ve already seen the film and either like it or hate it. I don’t think there’ll ever be a time where I will accept this film because it ruined the previous six films in so many ways. The fact this DVD features an “Extended Cut” is very misleading because I was expecting a lot more than one scene. So summing up, I’m still disappointed with the film so my score for the movie is 1/5 but the DVD gets 5/5 for the picture/sound quality and special features.