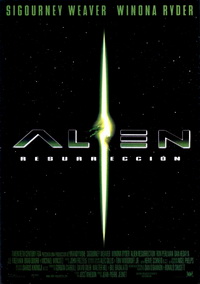 It is 200 years since Ellen Ripley died on Fiorina 161. Ripley’s former employers, The Weyland-Yutani Company has dissolved and now the United Systems Military has assumed the task of breeding and harnessing the deadly aliens. With blood samples taken from her previous life, scientists clone a new Ripley in order to extract the queen alien inside of her. The new Ripley, known as number 8, acquires physical and emotional traits from both humanity and the aliens, making her question where her allegiances lie. Shortly after, the aliens break free and commence killing those onboard. Ripley, along with a crew of smugglers that unknowingly helped in delivering hosts to breed the alien species, must now escape the perilous ship. Along the way, Ripley encounters a shocking revelation that truly sets herself against both humanity and the alien species. She must now decide what she truly is, in order to save humanity once more.

20th Century Fox hired Joss Whedon (Serenity, The Avengers) to write the script for Alien Resurrection with the final part of it taking place on Earth with a huge battle. He wrote five different versions of the final part of the movie but none of them ended up in the movie. The studio thought that the film would revolve around a clone of Newt from Aliens and Whedon wrote a 30-page treatment based on that idea. 20th Century Fox liked the script but the decided it would be better off making the story about a clone of Ripley who they believed to be at the centre of the franchise.

Whedon found it challenging trying to come up with a story to bring back Ripley. Producers David Giler and Walter Hill came up with the idea of cloning but they were against making Alien Resurrection as they thought it would ruin the series. During Alien 3, Weaver wanted to free the character and not have Ripley become a cliché character of constantly waking up with monsters running around her. At the time, there were also rumours of an Alien vs Predator film which Weaver opposed as that was one of the reasons why she wanted Ripley to die in Alien 3. Despite this, Sigourney Weaver really liked Joss Whedon’s script believing that having the clone of Ripley be part human and part alien would be an interesting character to play. She received a co-producer credit and was paid $11 million.

The producers originally approached Danny Boyle (Trainspotting) to direct Alien Resurrection but he wasn’t interested in directing. Peter Jackson (Lord of the Rings, King Kong) was then approached to direct but declined saying he couldn’t get excited about another Alien film. Another person asked to direct was Bryan Singer (X-Men) after Fox were impressed with 1995’s The Usual Suspects. Eventually, the studio found Jean-Pierre Jeunet who was impressed with his unique visual style. He was surprised they were making another film as Ripley died in Alien 3 but he accepted the project.

An interpreter was hired as Jeunet didn’t speak much English and he hired various French actors and crew members who he had worked with before. He hired special effects supervisor Pitof and cinematographer Darius Khondji who he had worked with on The City of Lost Children. Jeunet and his crew watched the first three Alien films and acquired production reports. He also had some input into the script, introducing several new ideas including five different endings. He wanted to make the film more of a dark comedy and the producers encouraged him to add more gore and violence. Concept artist Marc Caro drew some sketches of the characters’ costumes and costume designer Bob Ringwood made some small changes to the final designs.

Special effects company Amalgamated Dynamics (A.D.I.) were hired again to handle the film’s creature effects. They based their designs on what was said in the script such as the aliens having pointed tails for swimming and making their heads and chins more pointed. They began making sketches, sculptures and eventually making life-size models. For the Newborn creature, Jeunet wanted the hybrid to be more human than alien and an initial idea was to have it copy Ripley’s features but the crew thought the resulting design would look too similar to Sil from 1995’s Species.

Some human facial characteristics such as eyes and a nose were added to the creature to create more emotional expressions. Jeunet also wanted the hybrid to have genitalia of a mixture of both male and female sexes. 20th Century Fox weren’t happy about thus and when Jeunet saw the finished product, he said: “even for a Frenchman, it’s too much”. The genitalia were digitally removed during the post-production process. The hybrid required nine puppeteers to operate.

The filmmakers opted to use miniatures for the spaceships as they thought CGI wasn’t realistic enough. The Auriga spaceship was designed by artist Nigel Phelps and it was similar in design to a medical instrument. The design was way too vertical for the camera frame and it was too much like a space station so Nigel Phelps, production illustrator Jim Martin and concept artist Sylvain Despretz were asked to redesign the spaceship. It was redesigned to be more horizontal and streamline in appearance.

Filming for Alien Resurrection began at Fox Studios in Los Angeles from October 1996 to February 1997. There was a shortage of space as The Lost World, Titanic and Starship Troopers were being filmed at the same time. Alien Resurrection was also the first movie to be filmed outside of England because Sigourney Weaver believed that travelling back and forth was too tiring for the cast and crew. The underwater sequence was the first scene to be shot and Stage 16 at Fox Studios was converted into a 36 by 45 metre tank that was 4.5 metres deep.

The stage was converted because the nearest facility was in San Diego which would have been too costly for a single scene. The cast trained in swimming pools with professional divers to learn how to use the equipment. Two more weeks of training took place at the studio with stunt coordinator Ernie Orsatti and underwater cinematographer Peter Romano. Sigourney Weaver didn’t take part in the training as she was busy on Broadway. Winona Ryder also had to overcome her fears of being in the water after she nearly drowned when she was 12 years old.

In the basketball scene, Sigourney Weaver trained for ten days trying to get the ball through the hoop behind her back, averaging one out of six shots. When it came to filming, she was much further away from the hoop than she trained for and Jeunet, for time reasons, wanted to use a machine to throw the ball in the hoop or use CGI. Weaver wanted to do it for real and she made the shot in the sixth take. The ball went out of frame for a second and visual effects supervisor Pitof offered to edit it so that the ball was in the shot for the entire shot but Weaver refused. Actor Ron Perlman went out of character when she made the shot and turned to camera and said “Oh my god!”. The filmmakers managed to edit that out during the editing process.

The script was laid out with pictures on the left and the dialogue and descriptions on the right which enabled Jeunet to plan out every shot. The alien visual effects were done by a company called Blue Sky Studios after Jeunet was impressed with their work on Joe’s Apartment.  Jeunet wanted to use CGI aliens whenever an alien’s feet was in frame as having a man in a suit was too obvious. Blue Sky Studios were hired to create 30 to 40 shots of CGI aliens.

The music for Alien Resurrection was composed by John Frizzell. To get the job, he sent four tapes to 20th Century Fox and the studio liked the fourth tape which contained music from The Empty Mirror. Fox hired him and Frizzell spent seven months writing and recording the score. Jeunet wanted the music to be very original and different to the previous films, adding themes of romance. The cue “They Swim” took a month to complete as Jeunet was unhappy with the original version so asked Frizzell to do something different.

A pre-screening of Alien Resurrection took place in Camarillo, California and the movie was released in North America on November 26, 1997, entering at number at the box office, grossing $16 million in its first weekend at 2,415 cinemas. It grossed $25 million in the first five days and in total, it grossed $47.7 million in North America, making the lowest grossing Alien film domestically. It did much better overseas, grossing $113.5 million with a total worldwide gross of $161.2 million.

Alien Resurrection received average reviews from critics upon its release. Many believed that Alien Resurrection should never have been made in the first place and Whedon’s script was unimaginative. Some people at the time thought it was a better film than Alien 3, however. It currently holds a Rotten rating of 52% on RottenTomatoes based on 69 reviews.

In a 2005 interview, writer Joss Whedon was asked about how different the film was from what he had written. He essentially said the filmmakers did everything wrong:

There was a bit of a controversy with H.R. Giger after the film had been released. Giger had worked on the three previous Alien films and still expected to receive the ‘Original Alien Design’ on Alien Resurrection. Giger stated that the alien designs in this movie were even closer to his original design in Alien than the ones that appeared in Aliens and Alien 3. 20th Century Fox later gave him credit on the subsequent media releases.

Alien Resurrection was first released on VHS and DVD on June 1, 1998 which contained few special features. In December 2003, the Alien Quadrilogy was released as well as a separate 2-Disc Special Edition DVD set in January 2004. The set included an extended version of Alien Resurrection which incorporated some additional scenes and alternative footage. Particularly, a new opening sequence and pre-credits scene showing the destruction of Paris. The special features included a commentary with various cast and crew members and the second disc included many behind-the-scenes featurettes and features. Alien Resurrection was released on Blu-Ray in 2010 as part of the Alien Anthology set and a standalone 2-Disc Set. It included all the features of the previous sets as well as a few more new ones.