Opening Credits
The opening credits of the film are different. In the special edition, it starts off with a shot of a bug been squashed by a man in a space capsule.

Surgery
When the scientists are doing surgery on Ripley 8, she awakes in the middle of it, grabbing the scientist’s arm and tries to break it.

Newt
In the medical examination, Ripley 8 is shown a picture of a little girl. She clearly remembers Newt from Aliens, she smiles and then her face turns to sadness.

Vriess’s Joke
Before Johner throws the knife at Vriess, Vriess says a joke to Call: “What has two thumbs, one eye, a pink tongue, and screws like a god?”. Vriess later throws a screwdriver at Johner.

The Chapel
There more dialogue in the scene with Ripley 8 and Call when she interfaces with ‘Father’. Ripley asks her why she came here and Call says she wanted to protect people. Ripley then tells her she wanted to do the same and reminisces about a girl who had bad dreams – referencing Newt from Aliens. When Distepheno comes to get them, Ripley asks Call if she dreams and Call tells us they have neurol processors that enables them to do that. Ripley 8 says “When I sleep, I dream about them. It. Every night. All around me. In me. I used to be afraid to dream, but not anymore.” “Why?” “Because no matter how bad the dreams get, when I wake up it’s always worse.”

Alternative Ending
Alien Resurrection has a different ending in the special edition. There’s a shot of the Betty landing on Earth which has been completely destroyed. We then see Ripley 8 and Call sitting down and Call wonders what they should do when the military arrives. The camera pans up to show a destroyed Paris and with the Eiffel tower in the background.

This section includes things that were in the Alien Resurrection original script but were never filmed.

Dark Dream
The film had a dream sequence opening in the script. There’s a shot of  a large wheat field with a woman and girl with black hair. The girl says “My mom always said there were no monsters, no real ones, but there are.” The girl slaps a bug on the back of her neck and soon she is swarmed by the bugs. There is lots of blood rising at her feet and the girl opens her mouth to scream, but the black insects crawl into her mouth.

ANGLE: WHEAT.
A birds eyes view of a field, the soft golden waves filling the screen. Sharp contrast to what we have seen before.
There is a woman wandering through the field. Beside her a girl, seven or eight, in dingey sundress. Both have black, tousled hair.
GIRL’S VOICE
My mom always said there were no monsters — no,real ones — but there are.
The girl stops, looks around her. The wheat comes all the up to her chest, and nothing else is visible as far as she see.
She looks back at the woman but the woman is already more than fifty yards away.
The girl’s expression becomes perplexed.
She slaps a bug on the back of her neck. Pulls it off and is HUGE, wriggling fleshily in her hand. Her expression becomes even more distraught, but she cannot muster forth a shout.
The sound of insects-fills the air. Another bug lands on her, another. She looks down in growing horror and sees:
Blood. At her feet, rising, filling the field, rising above the wheat, a sea of blood now, dark, thick.
The girl tries again to scream, raises her arms. She is completely covered in insects, a skittering black shroud of them, and when she finally does SCREAM they flood into her mouth.

Hell’s Garden
The main characters enter an area of the Auriga filled with a huge garden, which supplies most of the food for the ship’s crew. St Just, a main character, finds a jeep and they all get on it. Ripley 8 drives it through the huge jungle and an alien leaps out of the jungle onto Hillard and kills her. Ripley 8 drives faster as more aliens emerge from the jungle and St Just kills the alien on Hillard’s body. An alien falls down into the vehicle’s path, and Ripley 8 drives the jeep into the jungle. The crew fight off the aliens, and Johner almost falls off, but he is saved by Vriess. St Just is badly hurt by an alien before he kills it. The jeep bounces down the slopes in the garden with the aliens close behind. It goes into the left hall at the end of the garden, and Ripley 8 brings it to a stop. Everyone abandons the jeep and shoots the aliens, but the aliens’ acid blood begins to melt through the hull of the ship. The crew runs away as St Just is firing at the swarm of aliens with his wrist guns. He runs out of ammo and pulls out two more disposable wrist guns, continuing to kill the aliens. His guns’ ammunition runs out and the hall then bursts open pulling everything in that sector into space. The others make it into another sealed sector just in time. 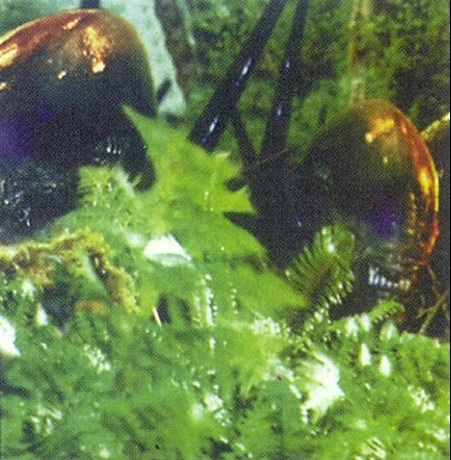 The scene was removed early in development due to budget cuts according to conceptual artist Sylvain Despret. The character of St. Just was removed and some of his parts were merged with Christie in the final shooting script. The above picture is a mockup for a magazine article about Alien Resurrection.

Waste Tank 5
Ripley 8 is originally hung upside down from the ceiling of Waste Tank 5, which is the location of the Queen’s nest and Gediman is hung next to her. He tells her that the aliens have been draining him. The Queen is killed by the birth of the Newborn, and it’s described as a spider creature with no eyes. It has pincers on the sides of its mouth and red veins running through its body. The Newborn spots a soldier hanging from the ceiling who begins to scream, and it leaps onto the ceiling near him. It grabs the soldier and inserts its tongue into his throat to drain the soldier’s blood. After it finishes with him, it kills Gediman. Ripley 8 escapes from her cocoon and falls into the pool just as the Newborn leaps at her. She emerges from the pool with the rifle that the soldier had and kills several aliens. She sees light coming from holes that were shot in the tank and runs inside it. The Newborn chases after her, but it’s too big, and Ripley escapes through a vertical shaft.

Alternative Ending
Call and Vriess fly the Betty out of the Auriga’s airlock while Ripley 8 and the Newborn hold on to the outside of the ship. The Auriga crashes into snow-covered mountains, and a wave of fire chases the Betty. Johner sees Ripley 8 holding on but refuses to open the hatch because of the Newborn. The shockwave from the Auriga shakes the Betty, and Ripley 8 is thrown off, but she grabs hold of one of the Newborn’s tentacles. Call pushes Johner aside and opens the hatch. The Newborn heads for it, but Call comes out with a Grenade Launcher and blasts it. It merely wounds the Newborn so Call fires again but misses. Ripley 8 gets inside, and Call closes the hatch as the Newborn rams into it. Call takes over piloting beside Vriess as the Betty nears close to the wooded ground below. Johner informs the others that the Newborn is behind the thrusters, avoiding debris. Call turns on the thrusters, which hurts the creature.

The Betty crash lands, and Call leaves to see if the Newborn is dead. The Newborn lunges at her, and its tongue shoots out. Its flesh is black in spots, but in other places, new pink flesh has been uncovered. She dodges it, and the Newborn runs away. Call gets a grenade launcher to go after it, but Ripley 8 convinces Call that she should go instead. Ripley 8 hunts the Newborn by following its tracks in the snow. She races through the trees and reaches a cliff face where she sees a huge city in the distance. The Newborn rises in front of her in the darkness and hits her with its tentacles. Ripley 8 manages to get a shot off, but the creature is only stunned, and it knocks the futile weapon away. Call comes to the rescue in the Harvester and rams into the Alien. The Newborn gets back up and it’s hit by the harvester again, but its tentacles shoot out, hitting Ripley 8 off the cliff. She manages to grab hold with her nails digging into the cliff’s side, and she crawls back up.

The Newborn throws the Harvester, but the vehicle shoots back at the Alien at top speed, crashing into it. The Harvester is thrown upside down from the collision, and Ripley 8 reaches the top of the cliff, racing for the grenade launcher. The Newborn goes toward her, but she fires, knocking it back until the gun runs out of ammo. Ripley 8 screams and lunges into the beast, sending them into the Harvester. Call throws a lever activating the machine’s blades, which shred the Newborn. Ripley 8 gets free from the alien’s grasp and helps Call escape from inside the Harvester as acidic blood rains down. They get free, and it explodes. Call, Ripley, Vriess, Christie, and Johner gather around the fire, relaxing. They all decide to leave before troopers arrive.