The Alien Legacy boxset was first released in the UK in May 2000 priced at £70. I remember wanting it for a long time when it came out but I wasn’t prepared to pay that much for it. A few years later, I managed to buy it for about £30. The boxset contains a total of five discs. The four movies in separate cases – Alien, Aliens, Alien 3 and Alien Resurrection and a special bonus disc. There’s also a Certificate of Ownership leaflet too. 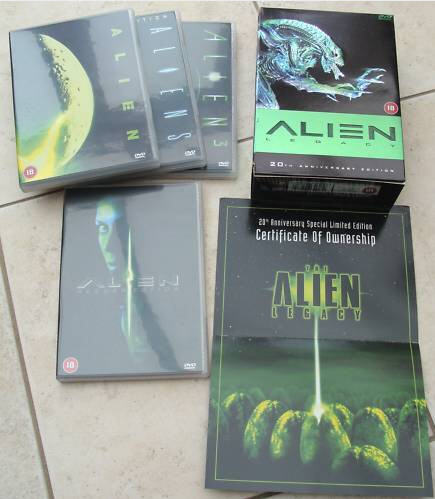 Yes… this is where the Alien franchise began. Alien has to be one of my most favourite films of all time and it’s not hard to see why. I first saw Alien when I was about 10 years old and back then, it really terrified me. The film is just filled with so much mystery at the beginning too. It even takes about 45 minutes into the film before anything happens which is a good thing in my opinion. The atmosphere that director Ridley Scott managed to create here is phenomenal. The sets are amazing too. Especially LV-426 and the Pilot’s spacecraft. The cast is great too and it’s the actors who sell the horror and that’s done incredibly well. Another person who is responsible for the huge success of Alien is HR Giger and his alien creations. The alien design manages to be scary and terrifying. Alien is simply a classic sci-fi / horror movie that still holds up well 25 years after it was first released.

Despite being made in 1979, Alien is still a masterpiece and it’s difficult to tell that the film was made so many years ago. The shadows have a depth and a texture which would simply not have been possible even with VHS. All in all, every aspect of the film is brilliantly accomplished and the anamorphic PAL transfer provides a good resolution for those people with a widescreen television.

The audio, like the picture, is hard to fault. The sound is crisp and clear with the 6 distinct sound tracks of Dolby 5.1 each being used to full effect in an impressive way. In many cases, the rear speakers are used to play music only whilst the voices derive from the front speakers, and this works brilliantly. It’s very rare that audio tracks come onto DVDs like the one here but this DVD is especially an advantage to people with surround sound speakers. For those of you who like subtitles, this DVD comes with lots of subtitles in many different languages.

-Director’s Commentary
The Director’s Commentary features the director, Ridley Scott reminiscing about the filming and explaining in detail aspects of the film. The director often praises the cast and the crew who worked on the movie and he also mentions his admiration for Kubrick’s 2001: A Space Odyssey, where he was a little influenced by the film. Overall, the commentary is very interesting.

-Deleted Scenes
There are 10 Deleted Scenes included on the disc which are: Alien Transmission, Lambert Confronts Ripley, Kane’s Condition, Ripley and Parker, Planning The Search, A Quick Glimpse, Ripley Reassures Lambert, Airlock Sequence Part 1, Airlock Sequence Part 2, and The Cocoon Sequence, all of which have a description of the scene to the right of the scene link. All of these are presented in 2.35:1 letterbox widescreen where they look inevitably unpolished compared to the film itself but still they are very interesting. In most of the deleted scenes, you can see why the scenes were not added to the movie apart from the Cocoon Sequence in which Ripley, about to flee the Nostromo, comes across Dallas and Brett encased in a cocoon structure in the ship wall. Brett is clearly dead, but Dallas is still alive and begs to be killed as an act of mercy; Ripley complies with his request, torching the structure with her flamethrower.

-Outtakes
There are two outtakes which were chosen not to be used in the final film: Rise and Shine, where Kane enters the room shortly after awaking from hypersleep; and Alien Attacks Lambert, which was not used because Ridley Scott thought the Alien looked too much like a man in a suit. Like the Deleted Scenes, these scenes are shown in 2.35:1 letterbox widescreen.

-Trailers
There are two theatrical trailers and two TV spots included on the DVD. The TV spots are shown in 4:3 aspect ratio and similar to the trailers in terms of quality and style but with voiceovers saying the line “Alien… rated R”. The first trailers is a short teaser showing stars followed by a planet’s surface and with the line in space, no-one can hear you scream. The second trailer starts in a similar way but then includes a range of clips from the film. Both trailers are shown in 4:3 aspect ratio and the picture quality is not as good as the film itself.

-Photo Gallery
The Art and Photo Gallery is vast and features conceptual artwork from HR Giger, Ron Cobb, Jean Giraud and Chris Foss. Each person has their own section of artwork on the disc and Ridley Scott’s full storyboard for the film is included along with Production Photos and Promotional Art and Photos.

-Easter Egg 1
Nostromo Crew Biographies: Go to the Special Features menu. Once in there arrow down the list to the Main Menu and instead of pressing right to go to the more extra special features press down again and you should be highlighting the hole in the floor. Select this and it will take you to the secret reports that ASH the android was sending back to the Special OPs. You are able to read them all.

-Easter Egg 2
Alien Lifecycle Transmission: In the Main Menu go up to the Special Features part but instead of pressing enter press LEFT. This should highlight the window box to the left. Press ENTER and this will take you to more Hidden documents. This time about the Nostromo’s flight plans and bios of all the crew aboard it.

The Alien DVD is very nice and features an impressive range of special features, including trailers, photo galleries and the Director’s Commentary. Apart from the extras, another important thing is the presentation of the film itself, and in this aspect the DVD is on top form. They’ve spent a lot of time and expense getting the transfer to look as good as it does. Overall, there’s very few faults with the DVD and is definitely worth the purchase. If you don’t fancy paying out the money for the Alien Legacy boxset, then this DVD is right up your street.