Alien vs. Predator Galaxy had the incredible opportunity to visit studioADI recently! Not only did we get to have a tour around the monster shop that has been responsible for the Alien and Predator for over 20 years, we also had the chance to speak to studio founders and creature-effect artists Alec Gillis and Tom Woodruff Jr!

It’s the last day of my trip in Southern California. As I approached the nondescript office building, I couldn’t help but feel a combination of nervousness and excitement. I knew I was about to meet two people that I’ve respected for a long time, artists whose work has inspired me and fascinated me since my teenage years. I knew I was about to see the works of numerous other artists of the studio, masters of their crafts. What looked like an ordinary office parking lot I had drove into felt like approaching an abyss of otherworldly monsters and technology, one I had only seen through behind the scenes videos on DVDs of some of my favorite films.

We were already in town to enjoy one of our favorite Halloween events: Universal Studios Halloween Horror nights; a night time theme park transformation into a spooky event with numerous highly produced walk-through “mazes.” As well as to visit both of our families who reside in Southern California. This studio tour ended up being a perfect conclusion to our little mini-vacation. We’ve both long respected and admired the work of studioADI. We’re passionate about practical effects and the experiences it can create in movies. While CGI can be incredible, it seems that a balance between the two mediums has been lost in favor of primarily CGI, leading many to have a harder time suspending disbelief in the theater.

Christopher, the social media manager for studioADI who’s responsible for guiding their internet presence, greeted us at the reception desk upon our arrival. Being both avid fans of monster movies and practical effects, it was easy to get a conversation going as we were taken into the expansive and detailed showroom. Anyone who has watched videos on studioADI are likely well aware of the impressive displays, and any guests fortunate enough to visit are met with a breathtaking look at studioADI’s most proud work.

While I had seen a number of their videos online showing off these incredible creations, it was something entirely different to see the works up close and in person. The level of detail and craftsmanship is highly unique and admirable, not to mention the mechanical side that bring these monsters to life. The showroom was walled with sets of films they had worked on; Notably the stone pyramid walls of AVP, and the Auriga starship interior panels from Alien Resurrection.

While I was immediately drawn to the full-sized Alien Warrior from Resurrection, and then to other Alien and Predator displays, there was so much more from other films that illustrated the impressive extent of their work. One of their newest showroom pieces: the upper body of Pennywise the Dancing Clown, the murderous monster-clown of this year’s highly successful “It” film, stared us down with its creepy eyes.

Tom and Alec had recently showcased their work on this film at the Burbank shop Creature Features, an emporium of monster and horror movie trinkets and collectables, which also hosts the occasional themed art show. During the times I’ve visited the shop, I’ve spotted a number of rare Alien and Predator finds. It’s definitely worth a visit for any fans in the area. 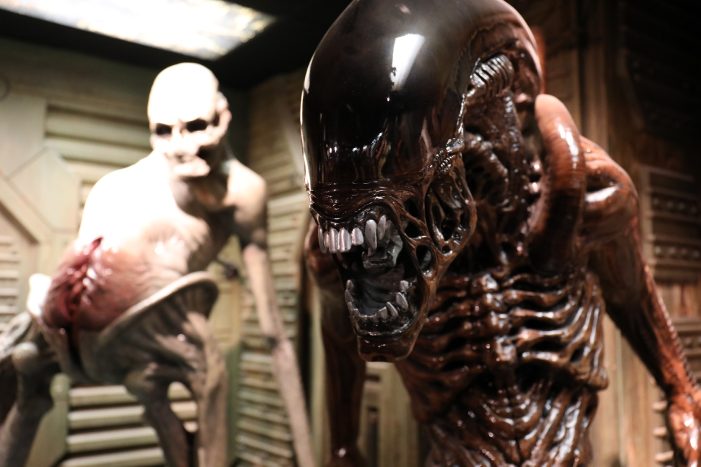 The infamous Newborn Alien stood behind the Resurrection Warrior in the showroom, its belly pushed forward as if it was almost proud to show off its hermaphroditic genitals that were ultimately cut from the film.

“Even for a Frenchman it was too much.”

After thoroughly looking around the room and starting to set things up for my interview I’d be conducting after the tour, Alec Gillis came in to greet us. Any nervousness I had from meeting an artist whose work I’ve greatly respected for years quickly faded as we started talking. Alec was totally friendly and like us, a massive fan of monster films and horror. But of course, how could anyone do this if they were not?

We were led from the showroom into the large workshop area, where Alec showed us around the various tables filled with works in progress for various films. The walls in this area were adorned with screen used monsters, including the massive Brain Bug from Starship Troopers. As we continued past the numerous workstations, I took a moment to examine a monster’s head that I recognized. The movie it was from was simply called The Monster, I had recently watched it with a friend. Even though it was a relatively low budget film, the design of the creature was really nice: ghostly white eyes with razor sharp teeth. 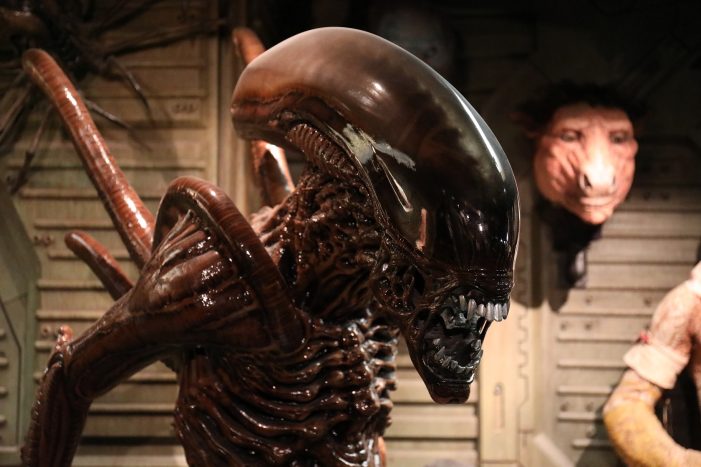 On the next table was another recognizable monster head: the screen used Newborn Alien. Not a favorite design of many fans, but it was still intriguing seeing its form up close. Next up was a display table filled with the recently announced studioADI Collection. At the time of my tour these were still under embargo but I could tell Alec was excited about this launch. He explained the concept of owning art from the studio, and that these pieces were entirely produced in house for serious collectors. These were not collectibles in the typical sense.

“We’re not trying to be Sideshow,” Alec told us, explaining that while they had been impressed with reproductions from companies like CoolProps, this is the absolute closest that fans can get to the accuracy of screen used creatures and props, as well as reproductions of conceptual work crafted by the studio. Most of these items will be pretty limited.

It was after this nice little preview of appealing merchandise that I noticed something drawing my attention on the corner of another workstation. I could instantly recognize the face of a Predator. It was unpainted and grey, missing the mandibles but there were spaces for them. Perhaps for a mold? I asked Alec, “This is from The Predator, right?” to which he confirmed.

The design was unique, something completely new and yet instantly recognizable as a Predator. This could very well be one of the faces we might see under the APC-riding Predator masks shown in the recently leaked images from The Predator. But I’m only speculating. As I continued to ask about their recent work on the film, Alec smirked and covered the rest of the workstation with a sheet. Whatever other pieces were there would remain a mystery, for now. 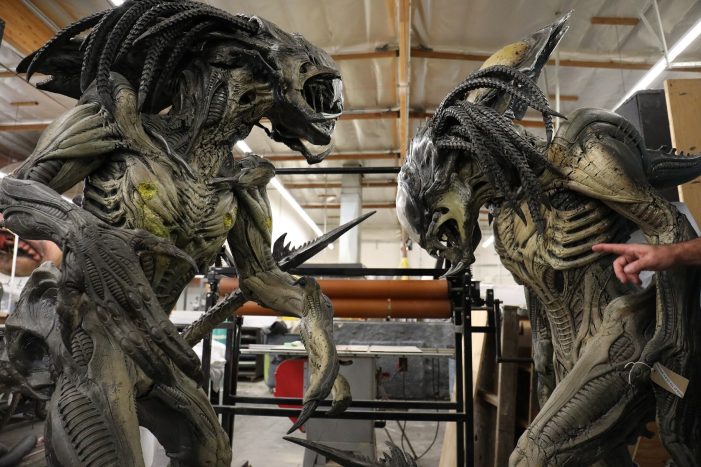 SizzyBubbles spotted a familiar tail and feet that could be seen under a tarp, it was the Predalien “Chet” from Aliens vs. Predator Requiem. Alec uncovered it for us to take a look, there were two of the Chet suits, one with bloodied markings. As a fan of AVPR, I loved seeing these suits in person. I appreciated the bio-mechanical details that were incorporated into its body.

Like the Newborn, a controversial design, but complaints about dreadlocks or reproduction methods aside, I’ll always be satisfied with the fact that this comic book and video game concept finally made it on screen. Unfortunately, the last 10 years have led to some decay of the latex, I noticed cracking in the neck and head. Just the nature of suits built for the screen, though they’ll likely last a lot longer than the original screen-used Alien I saw while visiting the H. R. Giger museum in the summer, of which there was little left that had not faded away. 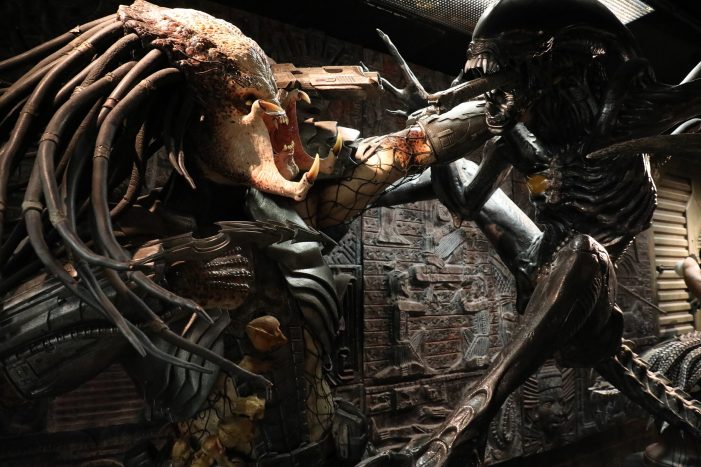 It was back to the showroom to finish preparing for the interview. Christopher was kind enough to help me out with the lighting placement of some units I had brought with me. Tom came in around this time to join us.

After some brief conversation while I completed getting my camera and audio ready, we got on to the interview. I had watched a number of videos like this with Tom and Alec on YouTube, both from their own channel and others that they had invited to the studio. It felt pretty cool to be filming one myself. The humor they threw in with their answers had SizzyBubbles and I laughing in the background. With all the pressure that must be present around creating signature effects for hurried productions, I got the sense these guys never forgot to have fun.

With the questions finished and the interview concluded, I broke down my equipment. Of course, me and SizzyBubbles brought our AVP and AVP-R behind the scenes books for signing! Tom and Alec had to return to work, but Christopher stuck around for some more banter while we got some final pictures and b-roll for the video feature. I took an extra moment to gaze at the full sized display from AVP – which featured the Predator “Scar” locked in battle with an Alien.

Christopher showed us his own creative projects, which look highly impressive. I would like to give him another formal thanks for hosting our tour, and the hard work he does managing the online presence of ADI.

I’ve loved the monsters of the movies, and seeing the practical effects and designs of these insanely talented studios: ADI, Legacy, KNB, Odd, Weta, and more shows what can be achieved with the medium. CGI is an incredible tool for filmmakers, it’s better than ever before, but like practical effects, different tools perform best for different jobs. Alien Covenant was the first film in the franchises where I felt dispirited about the lack of practical effects, even more so given that incredible practical effects were created by Odd Studio and then completely replaced.

With franchises that were built using strong practical elements like Alien or Jurassic Park, I really notice when those kinds of effects are absent. CGI really can do a lot in film, but I think proper balance with practical is key to not only selling the illusion, but giving the actors more to work with. For aficionados of monsters and horror, movies that show this real, physical work on screen will always be sought after and appreciated. 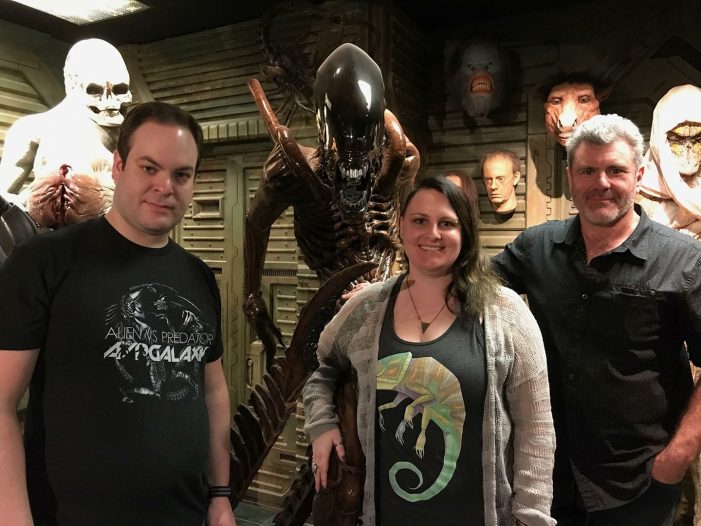