Aliens and Predators are a pair of the most iconical creatures, well, I don’t really need to tell you about Aliens or Predator. If you’re visiting this website, you should have some idea. But those creatures are brought to life by a number of different people and recently I got chance to talk to one of these people, Morris Chapdelaine. Morris is a puppetteer for the upcoming Alien vs Predator 2. 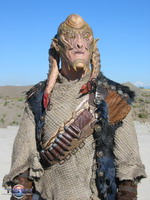 AvPGalaxy – Hey Morris, thanks for the interview! First off can you tell us a little about yourself?

Morris Chapdelaine – I am a puppeteer and actor who has been working in the film and television industry for 15 years. I live and work primarily in Vancouver, Canada, which some people claim is the sci-fi/horror film capital. I’ve been a puppeteer for years on Stargate SG1, Stargate Atlantis, and involved as a performer and puppeteer in several other television and film projects.

AvPGalaxy – You are the puppeteer for Alien vs Predator 2. What exactly does that entail?

Morris Chapdelaine – Actually there are several puppeteers for AVP2. The creatures required many talented individuals to work together to bring them to life and I was lucky enough to be given the opportunity to work on such an exciting project! As far as what being a puppeteer entailed on this project the list is quite long. I was closely involved with a team of professional puppeteers and film technicians working together on AVP2. From suit work and sfx make-up to hand, rod, cable, animatronics and hydraulic puppeteering- we did it all and often all together.

AvPGalaxy – Not many details from behind the scenes of AvP2 have emerged, but we know from Anderson’s first film that there’s been Predator face puppets, Face-Huggers puppets and even a life-size Alien. Which of those did you get a chance to work on in AvP2, if any?

Morris Chapdelaine – I was lucky enough to work on all of the above and MORE on AVP2. Without giving too much away- there was certainly a large variety of creature work in this film! I think the fans will go nuts when they see what we have in store for them.

AvPGalaxy – More? As in puppet Alien hosts or more as in different Alien types?

Morris Chapdelaine – A bit of both. Due to the wide variety of creatures and apparatus requiring puppeteering we had to be able to jump on any creature or prop and bring it to life. Fortunately we have a wide array of talented individuals here and under the direction of Amalgamated Dynamics Inc. (ADI) we were all able to work on several if not all of the puppets.

AvPGalaxy – Which of the puppets that you worked on was you’re favourite and why?

Morris Chapdelaine – I’d have to say my favourite was the hydraulic puppet. The sheer size and life-like qualities that were created with this creature were incredible and some of the most exciting puppeteering I’ve ever done. I think at any one time there were approximately 7 to 8 of us working to bring it to life. It’s also something very new for the franchise, and sure to stir a tonne of interest…

AvPGalaxy – For the first Alien vs Predator film, it took a single month to film the Celtic vs Grid fight scene. I’m assuming your fellow puppeteers are ADI veterans? Has their experience on the previous AvP helped you and the Strause brothers to speed up the process of filming any fight scenes? Assuming there are going to be fight scenes that is.

Morris Chapdelaine – Of course there are fight scenes- many in fact! The ADI ‘veterans’ and builders of the puppets were always working with us to speed up the process. Most of the Canadian puppeteers including myself had been fortunate to work with ADI before on projects like ‘Scary Movie 3’, and ‘The Santa Clause’, so we knew the kind of builds that they did and how to operate many of the controls smoothly even before we rehearsed. We also had a spectacular team of stunt/suit performers who we worked closely with every single day and night of shooting.

AvPGalaxy – How is working on Alien vs Predator 2 different from working on Stargate? Apart from the personality differences between the puppets, that is.

Morris Chapdelaine – On a feature like AVP2 there is essentially more time dedicated to making the live action and cgi sequences blend seamlessly together. The budget is obviously larger for a film as opposed to an episode of television as well, so the additional resources can only benefit the end project. Of course the ‘personality differences’ are huge as well. The creatures in AVP2 have a different set of priorities, new motivations and some pretty violent tactics to get what they want. The alien puppets on Stargate (the Asgards) are incredibly intelligent but don’t quite possess the physical prowess that these creatures have.

AvPGalaxy – Did you get a chance to work on the Queen Alien?

Morris Chapdelaine – No, I did not personally get a chance to work on the Queen Alien; she was one of my favourites from the first movie- who didn’t love her??

AvPGalaxy – In Stargate you played an alien character known as Tenat. As Tenat, you wore a large amount of prosthetics. Will we be seeing you in the suit of an Alien in AvP2?

Morris Chapdelaine – No. I am not in a suit in AVP2. Although I have done plenty of suit and prosthetic work in shows like Stargate SG1 and Andromeda, in AVP2 my work is pure puppeteering. I did a variety of work involving hand, rod, cable, hydraulic and animatronic puppeteering. But not to worry- you’ll be seeing plenty of suit performing. It was vital that the puppeteers worked as one with the suit performers to properly give the AVP2 creatures the life they demanded.

AvPGalaxy – Which type of work did you enjoy the most ie. hydraulic or hand? And what puppet was that?

Morris Chapdelaine – It’s hard to say what I enjoyed the most, but as I said above, I was thrilled to work the hydraulic puppet as it was something new for me.

AvPGalaxy – What was your favourite scene in AvP2 to work on?

Morris Chapdelaine – There were a lot of favourite scenes but I have to say that the battle on the rooftop was amazing! We worked on it for over 2 weeks and it was brilliant not only because of the sheer number of creatures involved, but because of the tense nature of the sequence and the choreography of the fighting. There is some stuff that has never been seen before- weapons, gadgets and hand to hand combat that is sure to pique everyone’s interest.

AvPGalaxy – Did you get chance to work on the Predalien?

Morris Chapdelaine – I’m not actually sure if I can answer that. Let’s just say that I was able to work on just about every creature/puppet in the film.

AvPGalaxy – How did you get into puppeteering?

Morris Chapdelaine – Through voice work…that and some workshops I had done as a youth while studying theatre. Arriving in Vancouver I realized that apprenticing and studying with some of the media puppeteers here was one of the best waysIi could become further entrenched in the world of sci-fi and horror films that seemed to be shooting all the time.

AvPGalaxy – What led you to working on AvP2?

Morris Chapdelaine – I remembered talking to the guys at ADI before they went to Prague to shoot AVP, and expressed my interest then. When I got word that the sequel was shooting in Vancouver, I immediately sent in my resume and hoped for the best. It was as ‘easy’ as that.

AvPGalaxy – Are you an Aliens / Predator fan then?

Morris Chapdelaine – Totally. I grew up watching the Alien and Predator films! I used to make my little sister play Sigourney Weaver and I got to be the Alien and we’d battle in the backyard! Who knew that one day I’d actually be able to bring that alien to life for real.

AvPGalaxy – Thank you for the interview. Any last words? A few teasers from the upcoming movie maybe?

Morris Chapdelaine – Last words…just keep an eye out for the trailer. I was able to see some edited footage while shooting on 2nd unit and it already looked impressive. I think this one will be a ride that is sure to become a huge hit. There were a lot of things done right in this story and the Alien/predator fans are NOT going to be disappointed.