Aliens vs Predator is a 2010 first-person shooter game developed by Rebellion and published by Sega for PC, X-Box 360 and Playstation 3. It follows in the same path as previous AvP games but it’s not a direct sequel 2001’s Aliens versus Predator 2, but more of a reboot. 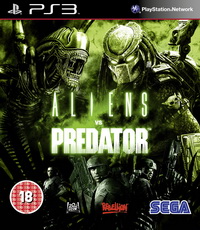 Like the other games in the series, Aliens vs Predator is a first-person shooter with a campaign for each species: Marines, Predators and Aliens. Each campaign has their own unique gameplay elements but the story does overlap with all three.

The Marine campaign begins with you landing on a planet after a Predator ship destroys the USS Marlow spacecraft. As the “Rookie”, you have to explore the human colony and get the systems back online. Corporal Tequila guides you along the missions and eventually you’ll come face to face with Karl Bishop Weyland. Marines can use a variety of different weapons such as pulse rifles, smartguns and flamethrowers and have equipment such as the shoulder lamp and flares to see into dark areas. There’s also the iconic motion tracker which tracks any movement in front of you.

The Alien campaign has you starting as “Specimen 6”, a chestburster, in a laboratory. An electromagnetic pulse disables the colony’s systems and now, Specimen 6, a fully grown Xenomorph escapes and frees the other Xenomorphs. The Aliens retreat to a refinery where a hive is created and lays dormant until the Marines arrive. As an Alien, the player can attack with their claws and tail and can climb on any surface and jump long distances. You can also harvest hosts throughout the campaign by pinning them down while a Facehugger infects them. You have the ability to perform instant stealth kills if you manage to sneak up on an enemy. You can automatically regenerate your health if you’re not being attacked.

The Predator campaign begins in a jungle on an alien planet with a Predator proving himself worthy in a trial. He, along with a few other Predators, investigate a distress call from another Predator on a planet known as BG 386.  The Predator fights through combat androids and xenomorphs in a Weyland-Yutani research lab that and later down to a pyramid to face off against a Predalien.

The Predator gameplay is based on using stealth and tactics than other species. A new gameplay element is focus jumping which highlights on screen the next spot to jump to when you’re traversing the treetops for example. The Predator features two additional vision modes: Heat to see humans clearly and Alien vision to see Aliens more clearly. There are numerous weapons at your disposal such as shoulder cannon, disc, combi stick, proximity mines as well as wrist blades.

The wrist blades allow the player to perform a trophy kill and one of several animations happen showing the Predator graphically killing the Marine. The cloaking device is also part of the Predator’s equipment which makes you invisible to Marines. Energy is required to operate the shoulder cannon and proximity mines which you can refill at recharge stations across the levels. Health shards can be found to replenish your health.

Along with the three singleplayer campaigns, there’s also an online multiplayer mode. You have the standard Deathmatch, Species Deathmatch and Mixed Species Deathmatch where it’s either every man for himself or to work in a team to get the most kills. Domination has your team trying to take and hold certain control points across the map and win by the amount of time you keep them. Infestation mode has every player starting as a Marine while one person is the Xenomorph. The Alien has to hunt down all Marines and when they are killed, the become an Alien. Predator Hunt is similar where everybody starts out as a Marine and one player is the Predator. With each kill, your score increases. Finally, there’s Survivor mode which features up to 4 Marines surviving waves of Xenomorphs. 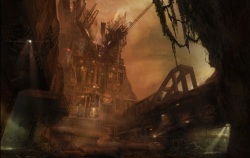 Aliens vs Predator originally started life under Vivendi who absorbed Fox Interactive in 2003. The game was developed by Rebellion who previously developed 1994’s AvP on Jaguar, 1999’s AvP on PC and 2007’s AvP Requiem on PSP. In 2008, Activision merged with Vivendi and later dropped many of their projects as they felt they weren’t a good fit in Activision’s catalogue. Sega then bought Aliens vs Predator.

Aliens actor Lance Henriksen voiced the character of Karl Bishop Weyland, the antagonist in the Marine campaign. Lance was really enthusiastic about the project but Rebellion’s alternative idea if Lance didn’t want to do it, was to explore the Yutani aspect of Weyland-Yutani.

The game’s story originated within the development team but ultimately, the game’s script was written by Gordon Rennie, who’s done a lot of work with Rebellion in the past for 2000AD and James Worrall, who has worked on a lot of the GTA titles. Rebellion thought about releasing mod tools like the previous AvP games but couldn’t justify the time and cost of doing so.

When Aliens vs Predator was submitted to the Australian ratings board OFLC in 2009, it was denied classification and was effectively banned. At the time, R18+ didn’t exist for games. Sega refused to cut the game so Sega appealed the decision and the OFLC classified it as MA 15+. The board said the violence within the game wasn’t prolonged, it’s fantastical in nature and justified within the context of the game.

Aliens vs Predator received mixed reviews from critics when it was first released. The general criticism was aimed at how the game wasn’t very innovative and that little had changed since AvP1 and AvP2 had been released over ten years earlier. Reviewers generally liked the three very different campaign styles as you could play as a Marine, Alien and a Predator and the story intertwined with each other.

Game Informer scored it 5.75/10 and said it was just a plain game: “Curiously, Rebellion’s 1999 PC release, Aliens vs. Predator, was well received, but this update captures none of that game’s unique spark. Instead we have a title trying to live off the fumes of two dormant franchises.” Official X-Box Magazine gave it a more positive 8/10 praising the atmosphere but criticised the Alien and Predator campaigns as not living up to the great Marine campaign: “It’s just a shame the other campaigns don’t quite match up. We can’t help but wonder if the traditional structure should have been abandoned for a lengthier sting as a Marine. Nevertheless, AvP is well worth your time and, with the unique online offering as well, there’s plenty to get your teeth, claws and wristblades into.”

IGN UK was more positive too with 8.5/10: “But that never truly detracts from how much fun is to be had throughout Aliens vs. Predator’s myriad modes as Rebellion leans heavily on the source material, creating a game that’s going to stoke the hearts of anyone who ever fell in love with the original films – which is likely anyone who’s ever picked up a game pad.”

In terms of sales, Aliens vs Predator had sold 2.19 million copies worldwide as of December 14, 2013. In the UK, it debuted at number one in the All Formats chart and it generated over £14 million in the UK, making the best selling Aliens game of all time.

You can find more images on Aliens vs Predator (2010) Screenshots.

You can find more images on Aliens vs Predator (2010) Concept Art.