After a night of no sleep and a long drive, my friend and I arrived at the Major League Gaming event in Orlando. The event was massive. Hundreds upon hundreds of consoles and HDTVs, massive projection screens, and of course, free Dr. Pepper. Most were participating in Halo 3 or Gears of War 2 competitions, but I was here for something much grander. Tucked away in a corner was the SEGA booth, giving a preview of Rebellion’s upcoming game Alien versus Predator. The booth had already gathered quite a crowd, and the stations were surrounded by gamers all anxiously waiting their turn to play. I was blown away watching this game, it looked great, and there was an awesome attention given to details. But how did it play?

Eventually I got my hands on the controller. I was finally going to play AvP. Just wanting to dip my toe in and get a feel for the water before I dive in, I chose to start off as the Marine. With my trusty pulse rifle I set out on the hunt in a free-for-all death match. It wasn’t long before beep… beep… beep; my motion tracker was going off, and I was closing in on the target (or, perhaps, he was closing in on me). Suddenly I was dropped upon by a cloaked predator, who promptly knocked me around, it was all over for me as he moved in for the kill.

Suddenly he was attacked by an alien player who dropped from the wall and skewered the predator with his tail. Taking advantage I unloaded my pulse rifle into the xenomorph that just saved my life until my barrel was glowing red. There is no room for heroics here. All of this happened within a few seconds. I was always on the lookout, and it was nerve racking to take the time to use a medical syringe to heal, or even reload (which take about three seconds, and one second respectively). I was hooked. The game is fantastic, and scenarios like this are not unusual. You never know what to expect, or where to look. Danger can come from any direction, literally. 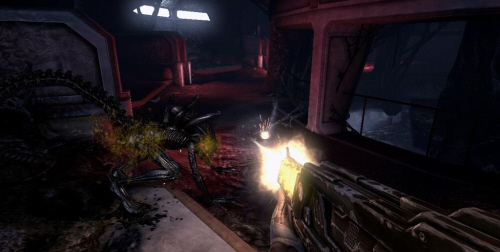 The Marine is the easiest one to pick up, but certainly not the easiest one to play as. What I mean is that Humans are definitely the underdogs of this story. Underdog, but certainly not underpowered. Marines start off with a Pulse Rifle and a pistol. The pistol can not be dropped, but has unlimited ammo (use in case of emergency ONLY!). The Marine can then acquire one of the many guns scattered around the map. I spent most of my time with a Pulse Rifle and Shotty, for close encounters. The awesome firepower of the Ultimate Badass makes the USCM something to be feared. A good team could dominate any situation.

In addition to the Pusle Rifle and Shotgun, there is also a flamethrower, scoped rifle and the infamous smartgun. The smartgun places an transparent blue overlay on the screen that will highlight and track targets, and, as you’d imagine, packs one hell of a punch. Unfortunately, I had only just acquired mine when I was flanked by an alien and decapitated. The scoped rifle provides you with what I’d estimate to be a x4 or x6 zoom when the alt. fire is used. This semi auto rifle is great for taking out targets from afar, but don’t get tunnel vision and carry a close range back up. The flame thrower? A great mid range weapon in enclosed spaces, but be wary when using it in larger areas, and your prey can slip away much easier. Choose your weapons wisely! 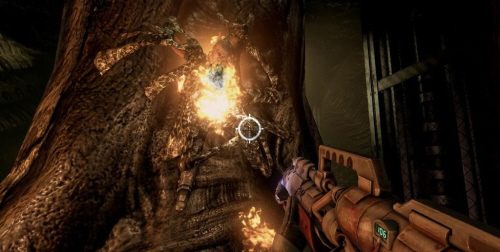 I would say I spent more time in the boots of the USCM more than any other species. Once you get into the groove, you shouldn’t have any trouble racking up the kills.

A tip: Remember to use your stim packs! I saw many Marines die as a result of failing to heal.

I arrived early for the second day, soon after the event started. I swaggered over to the booth after a long night of exploring the Orlando night life. I wasn’t ready to be doing anything, but I stepped up to the screen and started playing. Ready for something new, but thinking that the fast pace of the alien might not be a good call feeling like I did, I opted for the greatest hunter in the universe: the predator. This intergalactic sportsman is an absolute thrill. No longer does it feel like an extra strong marine with some fun gadgets; this ain’t no man. It doesn’t take long to get the hang of the predators general play style. The focus jump mechanic is very easy to use. The Predator starts off with the wrist blades and acquires weapons scattered across the map (many times in high places) and can carry four weapons at a time (in addition to the wrist blades, of course). Once you get the feel for this beast, you will feel like a true huntsman. Set your cloak and head for the hills, scan for enemies and rain death from above. 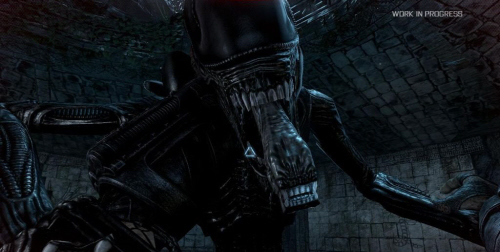 I became very acquainted with the plasma caster, and a solid hit is a deathblow. Though, don’t think that you can easily take someone down with it anytime. You have to pick the right moment to shoot, because you don’t want to expose yourself. After a matter of time using it, you will surely have to recharge your energy. The recharge stations are arranged in various places around the map. Find one and be sure to look around, because you’re vulnerable while you take the few seconds to recharge. The Predator is also quite the brawler, able to hold his own in any close quarters match.

Live long enough and you can become a veritable armory, and you can have a tool for any situation. The spear can prove to be quite the  ace in the hole in a pinch, as a quick throw at your  enemy can mean the difference between life and death. After being thrown, the spear will return to you after a brief cool down period when you recall it. There is also the predators infamous disk. Both of these weapons are operated energy free, which was a big plus in my book. This was probably one of the most fun things to use in the game. You guide your disk to your target by tracking them with you laser sight. The disk will automatically return to you after a few moments, ready for another toss. I was very happy with the way the predator played. The predator mines are also available for use, at the cost of energy. These buggers can make your hunting spot feel quite a bit more secure. 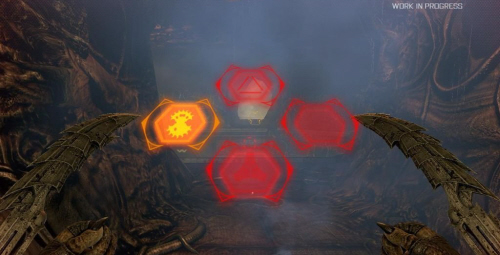 Like any good hunter though, you should have a plan and know what you’re going up against. You are not a invulnerable powerhouse of strength and health, and can quickly be cut down. When its time to heal, you turn tail, flee and heal yourself. This is a tactic I relied upon many times. Hopefully, if all goes well, you’re enemy should be trying to relocate you, and be prime for flanking.

A tip: Be sure to rotate your vision modes regularly, as the enemy not covered by that vision is nearly completely invisible.