October 27th, 28th, 30th and 31st. Four days. 36 hours of expo. 36 hours during which the gamers of the United Kingdom had the opportunity to preview the multiplayer aspect of Rebellion and Sega’s upcoming Aliens vs Predator. And what an experience it was.

I was originally going to attend Tuesday the 27th, having been expecting to return home from holiday early that morning. 12 hour plane delay saw an end to that notion and boy was I fuming. I didn’t expect to be able to go to the Expo. 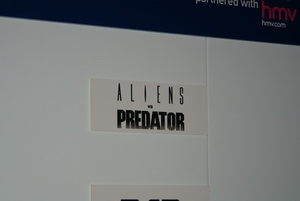 Luckily the good folks at the EuroGamer Expo allowed me to attend today (Wednesday the 28th). So, grabbing one of the few clean T-shirts I had (an Alien/ET t-shirt almost too small for me) I set off along with my good friends on Radio 1, course set for Leeds.  A little over an hour later I arrived to a monstrous queue that wound its way around the building until I finally set foot inside the expo.

ID in hand (damn my youthful beauty!) I headed into the adult section and sought out the AvP booth where I found a huge crowd and four screens (the London expo will have 8 players). It was beautiful. The simple decorations (what decorations?!) didn’t take away from the true beauty: the game. Unfortunately for me the demo was on PS3. Being a 360 gamer ’till the end, I’ve never picked up a PS3 controller in my life. But it certainly didn’t take away from the joy.

The demo shown was labeled “Multiplayer Demo 1.04 – 10:49:25 on Oct 21 2009”. It is more than likely one of the last Alpha builds as Beta begins this weekend. It certainly wasn’t rough. The game was very fluid and smooth, the environment and graphics amazing. True beauty. 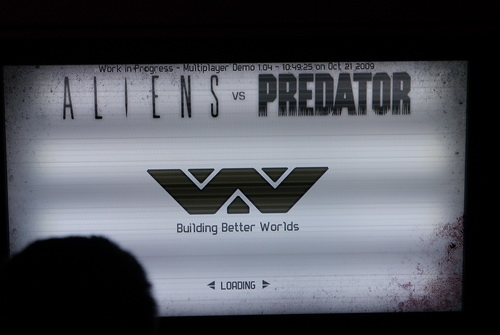 The demo only featured 2 maps: Jungle and Temple. Jungle was a medium sized map set in Predator ruins in the jungle. Dark and very open, Jungle was clearly a Predator map with its many high points (focus jumping is really handy), it really allowed the Predator player to move about, gaining high ground. It was also very Alien friendly; however it was not so easy for the marine to play in.

Temple is a jack of all trades kinda map. Set in a gigantic Predator pyramid/temple, the level offered plenty of tight corridors for the marines, dark areas and plenty of walls for the Aliens to maneuver around in and high points for the Predator. It even came complete with a huge stone Alien statue – throwback to Rebellion’s 99 AvP’s Alien missions maybe?

The demo featured only 3 of the multiplayer game modes. Standard death match (TDM is called Mixed Species Deathmatch), Predator Hunt and Infestation. Predator Hunt randomly selects a player to be a predator, while the rest of the players are marines. The Predator player has a time limit (around 2 minutes initially) to kill as many marines as they can. With each kill you perform your time limit is extended and you earn points. In order for a marine player to become a Predator, he must kill the Predator. Or if the time limit is expended then another marine is randomly selected to become the new Predator. At the end of the match the player who killed the most as a Predator wins.

Infestation is akin to the Survivor mode from Monolith’s AvP2. Aliens vs Marines. One Alien is randomly selected and must hunt down and kill the marines. When a marine is killed he becomes an Alien. The last marine standing is victorious.

The game doesn’t operate based on classes like AvP2. The marine starts with only a pistol designated VP78 (a homage to the real steel VP70 used in Aliens) which has standard single shot as its primary and full auto for secondary. It looks somewhat similar to the TimeCop pistol. The Pulse Rifle is the second default weapon for the marine, minus grenades. That’d make it too easy.

The Predator starts with only his wrist-blades which isn’t a bad thing by any stretch. CQB seems like it’s going to be a big part of AvP. All other weapons, for both species, are picked up in the maps. Each species can only hold 4 weapons which are selected using the D-pad.

For ease, the demo Predator started equipped with shoulder cannon, disk, trip mine and wrist-blades from spawn. An additional shotgun for the marines was also scattered around the maps. As well as grenade pick ups. The full version will obviously come with more weaponry including scoped rifles, smartguns, etc.

Anyway…my point? While you don’t get to play as classes, you can choose from numerous models (appearances) that you can use. I spotted Grid from Paul Anderson’s AvP, a Praetorian as it appeared in the 99 version of the game and the standard drone appearance that is being used in this incarnation. There will also be a model for the Alien you play in the single player mode which wasn’t included in the demo but it would seem that it isn’t your average looking Alien (maybe you play the PredAlien?). I also asked about whether the Queen would be playable in multiplayer but the Sega staff were unable to comment.

I saw the normal Predator mask plus one new mask. Looked like the masks could also be knocked off but I’m not sure if it affected their vision modes (the demo version only featured normal and infra-red). There were various different marine models as well. 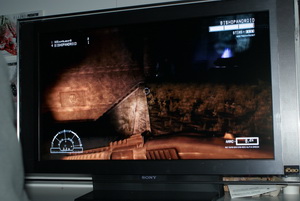 The models are actually unlocked as you play more games and earn more points. Points you say? Indeed. AvP will feature a leaderboard. At the moment it hasn’t been implemented and is still a work in progress so not many details are known.

Another fun modernizing aspect of the game is that when you kill a player 5 times you hear “Persecutor” and that player will hear “Persecuted”. It doesn’t affect the gameplay at all but it’s just a little feature similar to the Killing Spree and various other announcements in Halo 3, for example. It is the only exclamation in the game apparently.

I noticed a lot of people preferred to play as the Predator. As such I opted to not play as the Predator when I got my hands on the controller but it did seem to be the every man’s species. Appeared to be very easy to pick up. The focus jumping is extremely fluid allowing the quick movement around the maps and making high ground accessible.

In another throwback to the 99 AvP, the Predator’s energy doesn’t recharge. There are fixed recharge points around the levels that replenish your energy. However when using these points you become vulnerable to attack as you recharge. The points can be temporarily disabled by other species – the rep specifically said aliens could disable them but it fled my mind to ask if marines could do the same. I imagine that would be so though. These points are highlighted so you can find your way to them.

The Predators can also stealth kill opponent Predators that are cloaked, even if you’re on normal vision. The Predator has the standard medi-comp that is powered by your energy. I also saw a Predator take out another in 3 shots so they aren’t invincible. The marines can also take ’em down in around 30 rounds.

The wrist-blades aren’t actually a separate weapon, rather they’re the melee weapon. They can be used in conjunction with any other weapon. Water decloaks the Predator as does using weapons other than melee.