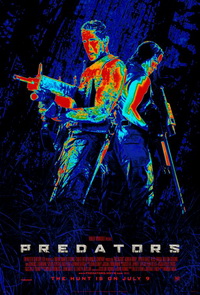 Chosen for their ability to kill without conscience, a group of killers, some trained and some who are not, must endeavour the alien race of predators that have set out to target them as prey. Dropped into the vast jungle of a distant world, these human predators must learn just who, or what, they are up against, and that their ability, knowledge and wits are tested to the limits in the battle of survival of kill or be killed.

A third Predator movie has been rumoured ever since Predator 2 was released. There were three main scripts written in the 90s. The first, written by Sam Park, is called Predator 3: The Deadlier of the Species and features Arnold Schwarzenegger’s character, Dutch, in New York during a blizzard. A Predator comes to New York and tracks down Dutch to try and kill him. The second script is called The Zoo which brings back both Dutch from Predator and Harrigan from Predator 2 and they are captured and brought back to the Predator homeworld because they were the only two people to have ever killed a Predator.

The last script was written by Robert Rodriguez in 1994 when he was working on Desperado and is called Predators. It’s set on a 17th century ship where a Predator stalks the crewman who have to fight with inferior weaponry. Rodriguez did speak about his script during an interview at the beginning of 2004 and said it was rejected because the budget would have been too big – about $150m. A draft of his Predators script dated 1996 has since leaked and you can read our Analysis about it.

In 2009, 20th Century Fox studio executive, Alex Young, contacted Rodriguez and asked him to revive the Predator franchise using his script from the 90s. Robert Rodriguez was hired to produce the new Predators movie. Originally, there was some confusion whether or not the film would be a remake of Predator or a reboot of the series. Rodriguez’s original script was the jumping point for the new Predators movie.

Amalgamated Dynamics, who worked on the Predators in Alien vs Predator and AvP Requiem were not asked back to work on Predators. Neither was Stan Winston Studios who were responsible for the original Predator films. Instead, they hired KNB EFX’s Howard Berger and Greg Nicotero to create the predator costumes. Howard Berger actually worked with Stan Winston on Predator. They wanted to have the Classic Predator look as it did in Predator so they went back and looked at the original design. The film also features a new tribe of Predators, alien dog-like creatures that the Predators use for hunting, as well as other creatures the Predators have brought to the planet.

At the 2009 San Diego Comic-Con, Robert Rodriguez stated that Predators would have an ensemble cast and said the characters would be the most important aspect of the film. He also said the title of the film had a double meaning that the characters are all predators as well as the alien creatures. For the lead role, Robert Rodriguez and director Nimrod Antal deliberately wanted to avoid casting anybody who was massively-built like Arnold Schwarzenegger as they didn’t want to simple remake or copy Predator.

Adrien Brody was cast as Royce, a mercenary who becomes the leader of the group. The actor said he loved Predator and viewed his role as a challenge because he wanted it to be a stark contrast to Arnold Schwarzengger’s Dutch  character. He put on 25 pounds of muscle for the role. Alice Braga was cast as Isabelle who is a sniper from the Israel Defense Force. She’s the only female member of the cast so she plays the role of peacemaker. To prepare for the role, she read a sniper manual and carried a 14 pound sniper rifle with her when filming.

Topher Grace plays Edwin, a doctor who reveals himself to be a murderer. Grace was hesitant about taking the role at first as he liked Predator but didn’t think the sequels were all that good. When he read the Predators script, he said it was the equivalent to what Aliens was to Alien. He also performed some of his own stunts during filming like jumping off the waterfall.

Oleg Taktarov was cast as Nikolai, who is a Russian commando. Taktarov likened his character to a mixture of Arnold Schwarzenegger, Jesse Ventura and Bill Duke’s characters from Predator. Because of his background in martial arts, he used some of that training during filming. Louis Ozawa Changchien plays Hanzo, a Yakuza enforcer. The actor used his kendo training for the samurai battle with the Falconer Predator.

The actor insisted it look authentic. Other actors include Walton Goggins as Stans, a prisoner on death row; Mahershalalhashbaz Ali as Mombasa, a Sierra Leone Revolutionary United Front death squad soldier; Danny Trejo as Cuchillo, a member of the Mexican drug cartel and lastly, Laurence Fishburne as Noland, a solider who has been on the planet for a long time. Derek Mears plays the Classic Predator which was designed to resemble the predator in the first film.

Brian Steele plays the Berserker and Falconer Predators. Carey Jones plays the Tracker Predator. He also filled in for Steele in some scenes. In the original script there was going to be a cameo appearance right at the end of the film from Arnold Schwarzenegger as Dutch. He was going to appear from a Predator ship dressed as a Predator and rescue Royce and Isabelle. Robert Rodriguez approached Schwarzenegger and reportedly offered to push back production on the movie until after he had left his Governor’s position but presumably he declined.

The film was shot on a 53 day schedule and began on September 28, 2009. The exterior shots were filmed mostly in Kolekole, Hawaii and the filming there took 22 days. Some scenes were filmed at Canyon Lake Gorge in Comal County. All the interior scenes were shot at Robert Rodriguez’s Troublemaker Studios in Austin, Texas instead of 20th Century Fox so that Rodriguez would have full creative control on the movie. In order to be eligible for tax benefits, 60% of the movie was shot there.

It was announced on February 6, 2010 that John Debney (Sin City, Iron Man 2) had been hired to compose the score for Predators.  He created many custom sounds and instruments including Tibetan long horns to create screams.

Predators received mixed to positive reviews from critics upon its release. It currently holds a Fresh Rating of 64% on RottenTomatoes based on 187 reviews. Many critics called it a fun action-packed sequel to Predator and considered it a better sequel than Predator 2. Some reviewers praised Adrien Brody’s performance while some others felt he was miscast in the role. Some of the criticism was also aimed at the pacing and poor characters.

Predators was released on DVD and Blu-Ray on October 19, 2010. The special features include a commentary with producer Robert Rodriguez and director Nimrod Antal, motion comics and various behind-the-scenes featurettes. The Blu-Ray version comes with more featurettes and deleted scenes.

Dark Horse released a 4-issue comic book based on Predators on June 9, 2010 to promote the film. They serve as a prequel, adaptation and sequel to the events in the movie. We particularly learn more about the characters backgrounds which we never saw in the movie. A Predators novelization was also released on July 27, 2010 which was written by Paul Tobin.

NECA released some action figures based on the predators in the film on July 9, 2010. These are a Masked Classic Predator, an Unmasked Berserker Predator and the Tracker Predator. The Predator ‘Dog’ was released in March 2011. Hot Toys and Sideshow Collectibles also made props, maquettes and figures based on Predators. A mobile video game was also released for IOS on July 2, 2010, Mac on June 10, 2011 and Android in November 2012. It was developed by Angry Mob Games and published by Chillingo.

Nimrod Antal, Robert Rodriguex and Adrien Brody have all expressed some interest in doing a sequel to Predators after it was released but nothing has happened. Please view the Predator 4 Rumours page for more details.

You can find more images on Predators Concept Art.