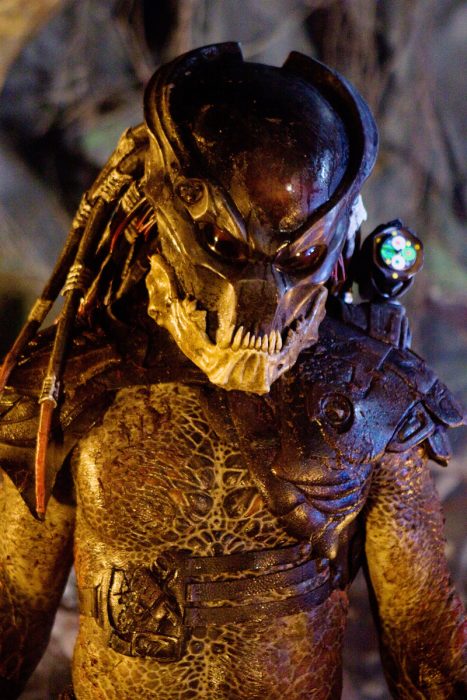 The Berserker Predator, also known as Mr. Black, was the leader of the Super Predators on the game preserve planet in the 2010 movie Predators. His most distinguishing feature is that he has a creature’s jaw bone on the bottom of his mask.

The Berserker and clan members Falconer and Tracker kidnapped dangerous individuals from Earth and dropped them onto a game preserve planet. The survivors as well as other Alien creatures were to be hunted by the Super Predators.

The Berserker may have had a hand in helping the Tracker Predator kill Cuchillo and set up a booby trap for the humans. When the characters reach the hunting camp with a Predator on a totem, the Super Predators open fire on them. Mombasa is killed by a spear and the Berserker fires his shoulder cannon at the others, destroying Nikolai’s Minigun. The characters escape into a river while a Predator falcon flies overhead. It returns to the Super Predators and the three of them decloak.

The humans escape Noland’s hideout. A cloaked Berserker Predator shoots Stan in the back and it decloaks in front of the others, preparing to fire his shoulder cannon at Royce. Stans then jumps onto Berserker’s back and stabs him multiple times, giving the others the chance to escape. The Predator throws Stans to the ground and kills him. This is the Berserker’s first trophy of the hunt.

The Berserker then puts his mask back on and goes after Royce. Just as the ship was taking off, the Predator activates his remote detonator and the spaceship explodes in the air. Back at the hunting camp, Edwin paralyses Isabelle and is about to kill her when Royce appears and injures him. The Berserker returns to the camp and discovers Edwin on the floor. He stabs him with his wristblades and turns him over.

Unknown to the Predator, Royce had placed a heap of grenades under Edwin which explodes sending the Berserker flying to the ground. Royce then hits him with an axe and ignites the gunpowder around them encircling them, and causing the Predator’s vision modes to malfunction. Royce hits the Predator multiple times and uses the flames to hide in the surroundings. Berserker then detects the human’s heartbeat and fires his shoulder cannon at him, knocking him to the ground. The Berserker Predator beats Royce and grabs his throat.

As he is about to kill Royce, Isabelle shoots the Berserker with her sniper rifle. It only injures him and it fires his wristblade at Isabelle, striking her in the shoulder. Royce smashed Berserker’s mask with his axe and started hitting him in the head. Royce slices his arm off and decapitates the Predator, killing him once and for all.

The Berserker Predator is shown to be absolutely ruthless and doesn’t follow any code of honor like previous Predators. It’s a general rule that Predators don’t kill people who are armed and if they fight in hand-to-hand combat, they generally remove all their equipment first. Berserker didn’t do any of these things and would kill anybody whether they are armed or not.

Like the other two Super Predators, the Berserker Predator has one wristblade on his arm which can be fired as indicated when he impaled Isabelle at the climax of the film. He has a new shoulder cannon which is much stronger than a standard shoulder cannon. It still fires blue plasma bolts but with a different firing mechanism than usual.  The longer the Predator charges up the cannon, the more powerful the subsequent blast will be. The Super Predators also have a cloak and advanced vision modes enabling them to see even more ranges and in more detail. When Royce was hiding in the flames, he was still able to detect his heartbeat. 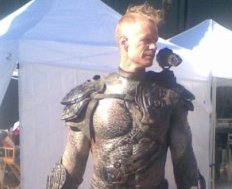 The Berserker Predator was played by 6′ 7″ Brian Steele who also played the Falconer Predator. Amalgamated Dynamics who created costumes for both AvPs did not return and instead, the suit and special effects were created by KNB EFX’s Howard Berger and Greg Nicotero. Berger had actually worked with Stan Winston on the very first Predator film. They had the idea of bringing the armour closer to the body, sweeping the dreadlocks back and elongating the head a little bit so it wasn’t quite as square-looking.