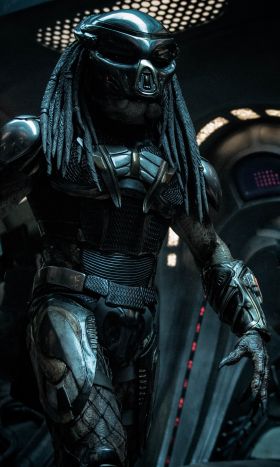 A soldier called Quinn McKenna is on a mission to rescue hostages in Mexico when the pod crashes near him. He goes to investigate, finds the pod open and recovers the Fugitive Predator’s mask and wrist gauntlet. Fugitive appears cloaked in the trees and kills one of McKenna’s team. Fugitive fires a plasma shot which kills another member of his team and throws McKenna to the ground. As Fugitive approaches him, McKenna accidentally activates the wrist gauntlet which fires a projectile injuring Fugitive and knocks him to the ground. McKenna walks off and the wrist gauntlet ejects a spherical device which is later revealed to be a cloaking device.

Fugitive waking up in the laboratory

McKenna mails the mask and wrist gauntlet to home address in America and later his son Rory inadvertently finds it. The government sect behind Project Stargazer recovers the pod as well as the Fugitive Predator for study. The scientists conclude that the Predator has human DNA inside of it. The enemy spaceship that was attacking the Fugitive Predator soon arrives on Earth and is carrying a much more advanced version of the Predator – the Upgraded Predator.

Back in the laboratory, the Fugitive Predator regains consciousness and breaks free from the restraints. He kills many scientists and military personnel before finding his weaponry and equipment. The Predator realises that the mask and gauntlet that McKenna took aren’t here. He goes to the decontamination area, finding a naked Casey Bracket sitting down but the Predator doesn’t kill her. He leaves the area before killing another guard and takes his gun. The Predator fires his assault rifle at the other guards before stealing the mask and shoulder cannon from behind a display cabinet.

The Fugitive Predator accesses his mask remotely and realises it’s in Rory’s basement. The Predator sees a note through the mask which tells him the name of Rory’s school and heads there. The Predator escapes the Stargazer base and sees the Upgraded Predator’s spaceship being pursued by F-22s. The Fugitive starts running with Casey and the Loonies in pursuit. McKenna fires a shotgun at Fugitive and he turns around and fires a projectile at his bus and punctures the tyre. Fugitive boards a military truck, killing all the soldiers in the back and deceives the driver into thinking everything is okay.

The Fugitive Predator catches up with Loonies at the school. Jumps on the roof of the RV, pulls Nettles out of the driver’s seat and fires a warning shot with his shoulder cannon. He targets Rory with his laser before telling the group to lower their weapons. McKenna shoots Fugitive and he, Rory and Casey head into the school. The Loonies stay outside and almost get it from a plasma shot.

Fugitive catches up with them and grabs McKenna up by the window. McKenna shows the Predator the device from the wrist gauntlet and gives it to him. Just then, the Upgraded Predator appears from behind the window and pulls Fugitive through it. Fugitive managed to fire a shot from his shoulder cannon but misses. He then attempts to use his wristblades against Upgraded but they snap on contact with Upgraded’s tough skin. The Upgraded Predator throws him onto a car, removes his mask and hits him hard. He easily killed the Fugitive Predator. The Upgraded Predator later destroys Fugitive’s ship to prevent the humans from taking it.

It is revealed in the closing moments of the movie that the Fugitive Predator wasn’t on Earth to kill mankind but instead to save them. The Fugitive Predator had stolen a special Predator weapon – The Predator Killer. He wanted to give it to the people on Earth to help them defend against an incoming invasion from a different faction of Predators. The scientists had recovered the pod the Fugitive arrived in and as they were studying it, the pod opened and revealed The Predator Killer. It latches on to a nearby worker and encases him in  full Predator armour and weaponry.

The Fugitive Predator has all the standard Predator weapons and equipment such as wrist blades, shoulder cannon, and cloak. He appears to use voice mimicry in the laboratory even though he didn’t have his bio mask. The stolen wrist gauntlet that McKenna takes seems to possess lots of new functions. A new version of the Smart Disc can be seen when McKenna accidentally uses it against Fugitive in the forest. He also takes a spherical device that can be used as a cloak.

Later, Rory removes a device from it that features holograms and it appears it can control the Upgraded Predator’s ship remotely. The stolen mask has a few features too. Rory can see visual recordings of Predator experiments through it and later a miniature plasma cannon can be activated from the mask. It appears to be just as powerful as a shoulder mounted shoulder cannon.

It’s clear from the movie that the Fugitive Predator has a high degree of understanding and knowledge of human behaviour and culture. In the laboratory, he was able to use an assault rifle to kill soldiers. When the Fugitive kills soldiers in the back of a truck, he picks up a severed arm and gives a thumbs up to the driver in front to signal that everything is okay. When he encounters the Loonies at the school, he uses a hand gesture to get them to lower their weapons. The advanced knowledge of humans could be partly because he has human DNA inside of him and is able to empathise with them. He was on Earth to help mankind by stopping a Predator invasion instead of being there to hunt humans like in previous films.

The film was about exploring the evolutionary aspect of the Predator mythology and to figure out why they hunt and what the purpose is. The Fugitive Predator was played by 6ft 7″ parkour artist Brian Prince. (Read our interview with Brian Prince). Prince was originally an art student in Atlanta when he got a call from the stunt coordinator for The Predator. He then sent a demo reel of his parkour skills and was invited for an audition for the Predator. He showed off his movements for the creature and mixed in hunting and primal elements with many of his parkour movements. The filmmakers liked what he did and was hired the next day.