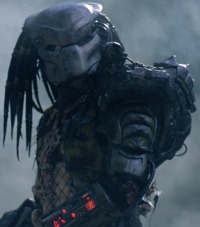 The Jungle Hunter, or Anytime Predator, is the creature that appears in the 1989 film Predator directed by John McTiernan. The Predator was designed and created by Stan Winston and his team, and is portrayed by Kevin Peter Hall. In the film, he appears in the jungles of Val Verde and is eventually killed by Dutch.

The Predator has superhuman strength, resistance, quick reflexes, and stamina. He is shown to be extremely agile and has the ability to perform high jumps and move quickly between the trees. The creature is a tall humanoid with advanced technology, capable of space travel and likes to hunt various creatures for sport. His equipment allows him to cloak to render him invisible and has heat vision which enables it to easily spot its prey. The Predator uses the following weapons and equipment in the film:

Prior to the events in 1987, the Predator began hunting humans he considered worthy prey during the hottest summers. He was known to the local people as “El Diablo que hace trofeos de los hombres”, literally “The demon who makes trophies of men”.

In 1987, the Predator returned to the jungles of Val Verde while a guerrilla war was occurring between two different factions. Several CIA agents were shot down and captured by the guerrillas so Dillon sent in a team of Green Berets led by Jim Hooper to rescue the agents. On the way to the guerrilla camp, Jim Hopper’s team was attacked by the Predator. Jim Hopper, along with two members of his team, were skinned and hung from a tree. 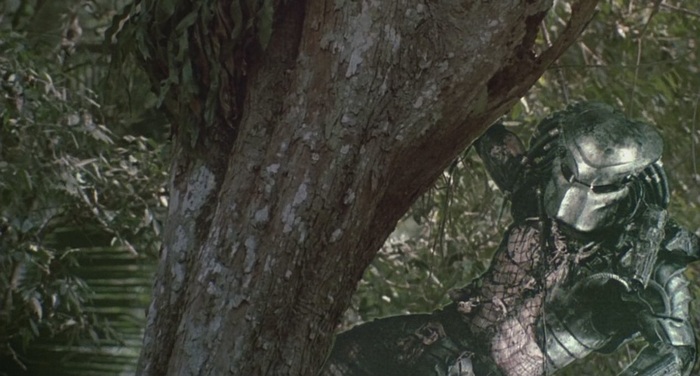 Dillon hired Dutch Schaefer and his team to rescue the CIA agents. They made it to the guerrilla camp and killed the rebel forces while the Predator watched from afar. When Anna, a rebel they captured, escaped, Hawkins chased after her. He was killed by the Predator and his body was later hung from a tree. The team searches for the body and Blain is shot by the Predator’s speargun. It doesn’t kill him so the Predator kills Blain with his shoulder cannon, blowing a hole through his chest.

The Predator was seen by Mac who opened fire with Blain’s minigun. We then see the Predator healing his right leg with his medi-kit. Later in the night, the Predator infiltrated the team’s camp and took Blain’s body. Dutch and his team set a net trap for the Predator the next day and waited for him to come. The Predator was trapped but used his shoulder cannon to escape, wounding Poncho in the process. Dillon and Mac chase after the Predator and observe it.

The Predator kills Mac with his shoulder cannon and blows off Dillon’s right arm. The creature moves in closer and finishes him off with his wristblades. As the rest of the survivors escape, Billy makes a last stand against the Predator armed with a combat knife. He is killed and the Predator follows Dutch. He kills Poncho, while Dutch falls over a waterfall. Dutch is covered in mud as he crawls out which makes him invisible to the Predator’s thermal vision. We later see the Predator removing Billy’s skull as a trophy. 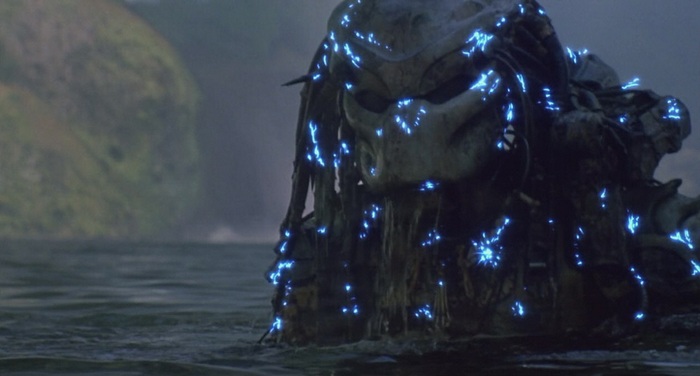 Dutch prepares for the final battle with the Predator and calls out to him. The Predator is drawn to a large fire that Dutch started and Dutch manages to disable his cloaking device. The Predator eventually causes Dutch to fall into the water removing the mud from his body, rendering him visible to the Predator.

The creature removed his mask and weapons and fought with Dutch in hand-to-hand combat. Dutch triggered one of his other traps with a huge log falling on top of the Predator. The creature is mortally wounded and activates his self-destruct device. He mimicked Billy’s voice and laughed as Dutch ran for cover before a huge explosion ripped through the jungle. 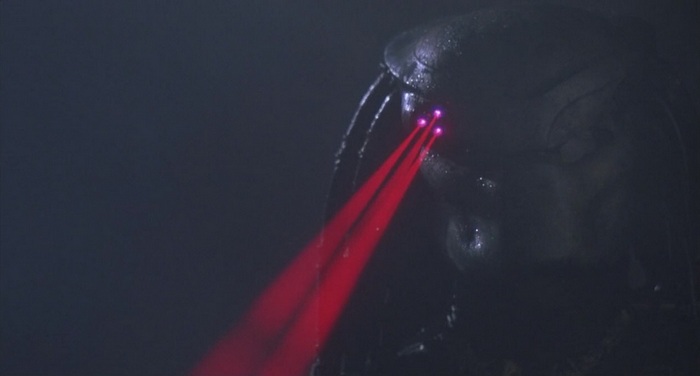 In the film, the Predator was originally played by Jean-Claude Van Damme, with the idea that a physical action star would use his martial arts skills to make the creature more agile. It was soon realised that the filmmakers needed to find someone bigger to stand up against the likes of Arnold Schwarzenegger, Carl Weathers and Jesse Ventura, who were well known for bodybuilding.

Van Damme was reportedly unhappy with the role and complained about the suit being too hot and that he wasn’t on camera without the suit. Eventually, they replaced the actor with Kevin Peter Hall who was 7”3’ tall and had just finished working on Harry and the Hendersons. Hall couldn’t see when he had the mask on so he had to memorize where everything was and rehearse beforehand. 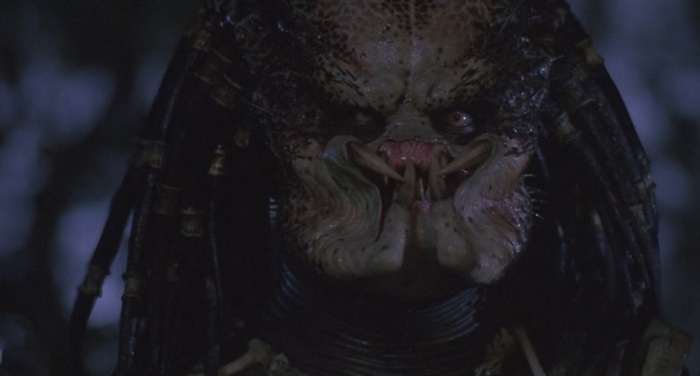 The original creature suit that Van Damme wore was quite different to final design. The suit had large yellow eyes and a dog-like head and was difficult to move in. The creature costume was redesigned by Stan Winston and his crew and had to be done within six weeks. Two suits were made for filming, cast in foam latex and the armour was sculpted directly onto the suit. The teeth were cast from acrylic and the dreadlocks were made from foam.

Stan Winston actually got the idea for the mandibles from director James Cameron. While flying to Japan with him, Stan Winston was doing concept art on the flight for the creature. Cameron saw what he was drawing and said, “I always wanted to see something with mandibles”. Winston then included them in his designs. The Predator’s skin coloration was based on a desert locust species, schistocerca gregaria.

Another red-coloured suit was created for scenes where the creature would be cloaked, which helped with the special effects. The Predator’s head was built separately and three different versions were made: a “hero” head that had facial articulation; a stunt head and a head that had an opening at the front which would be used for when the Predator had his mask on. The hero head was controlled by a set of 9 servomotors that enabled the brow and mandibles to move. Another servomotor was added later to move the lower mandibles and open them wider than before. Kevin Peter Hall was actually able to control the Predator’s mandibles with his own jaw. He also wore contact lenses to create the effect. 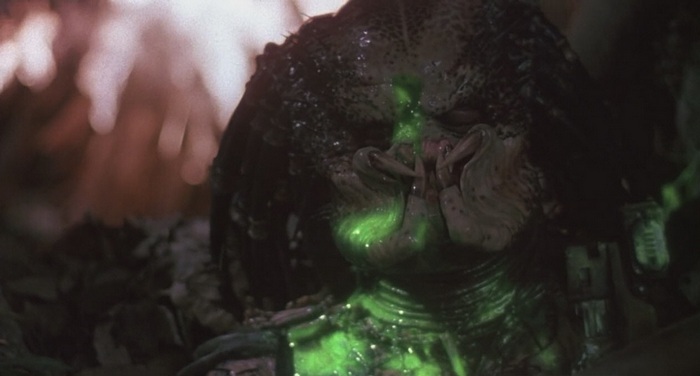 Originally, the Predator had a very different, more complex mask which was designed to mimic the creature’s tribal nature. Producer Joel Silver reportedly hated it and complained that the design lessened the impact when the Predator removes his mask and reveals his face for the first time. The mask was then redesigned to be simpler. The Celtic Predator’s mask in Alien vs Predator was sort of inspired by the complex nature of this mask.

Some weapons were conceptualised or created for the Predator but was cut from the final film. These included a spear gun (we saw the projectile hit Blain in the film) and a combi-stick which were both later used in Predator 2.  Two swords were made from fibreglass and was incorporated into the first test suit. It was removed when Kevin Peter Hall couldn’t turn the Predator’s head because of the sword handle.