Anna Gonsalves was a member of the rebel guerrillas operating in South America. When Dutch and his squad attacked the guerrilla camp, Anna was the only survivor and was taken hostage. One by one, Dutch’s team were killed by the Predator. Anna and Dutch were the only survivors. Anna appears in 1987’s Predator and a small cameo appearance in 1990’s Predator 2 and is played by Elpidia Carrillo.

Anna spent most of childhood in a convent in the capital city but later joined a rebel movement, taking part in planting bombs in government buildings and embassies in the country.

The rebels were preparing to invade Guatemala when Anna was sent to a group of rebels operating in the jungle. While the CIA were monitoring the rebels’ positions in a helicopter, they were shot down and taken hostage by the rebels. Dutch‘s team made their assault on the camp, killing almost everybody. Anna crept up on Dutch and was about to kill him but he knocked her out before she could.

Dutch decides to head to the extraction point after learning the mission was a set-up to clear out the rebels. Dillon insists they take Anna with her much to Dutch’s objections. Dutch tells Dillon that she’s his prisoner.

Dutch and his squad make their way to the extraction point unaware they are being tracked by an unidentified creature. Billy is the first member to realise something is out there in the jungle that isn’t human. Anna attempts to escape who is caught by Hawkins. The creature spares Anna but kills Hawkins and drags his body away. Anna claims the jungle came alive and took him.

Dutch organises a search to find Hawkins’ body. During the search, Blain is hit with a projectile, and then the Predator fires his shoulder cannon burning a hole straight through Blain’s chest. Mac sees Blain fall to the ground and sees a strange figure in the jungle. He picks up Blain’s minigun and fires it into the jungle. 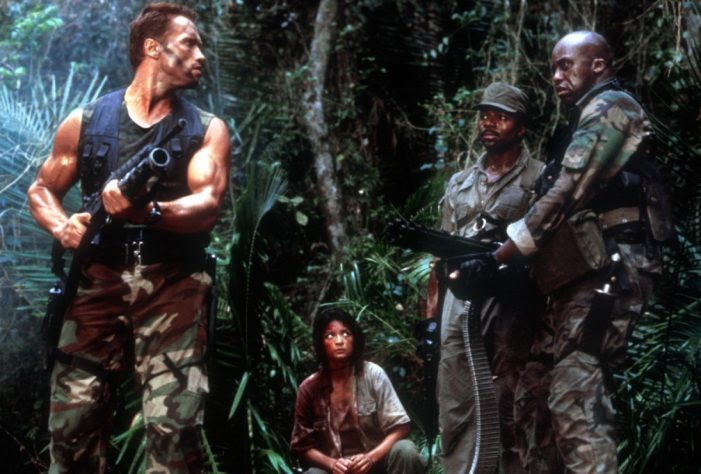 Anna realises that Predator was injured in the fight as there were florescent blood on the leaves which she rubs on her clothes. The team set up camp for the night and put traps all around to prevent anything from getting in. A wild pig inadvertently enters the camps setting the traps off. The team check on Anna thinking that she would have escaped in the mayhem but they find her still sat there scared. The team, however, discover Blain’s body has been taken by the Predator and Dutch realises the enemy is using the trees to get around.

The next day, Dutch questions Anna again and this time speaks in English. She tells him that the creature does bleed. Anna helps the team make a trap for the creature and the team waits until the creature comes back. Anna tells a story of when she was a child they discovered bodies every so often and that the Predator only comes in hottest months. The trap is successful but it doesn’t hold the creature for long. Poncho is injured by a falling tree and the creature escapes. Dutch and Anna carry an injured Poncho to the extraction point. Billy follows behind them but stops on a log bridge when he hears Dillon’s screams. 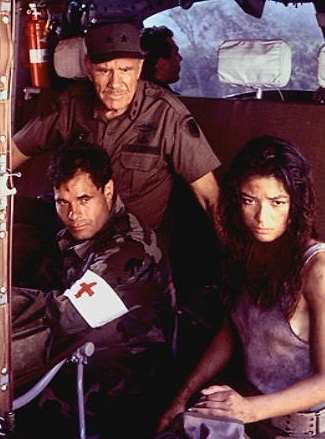 Dutch and Anna hear Billy’s screams. The Predator soon attacks them and Anna attempts to pick up a gun but Dutch kicks it out of her hand. Dutch realised the reason it never attacked Anna is because she wasn’t armed. Dutch tells Anna to get to the chopper. She runs and reaches the extraction point. A bit later, Anna is sat in the helicopter flying over the jungle when they see a huge explosion. They go to it and pick up Dutch who has survived the blast. They are both transported away.

After the incident, Anna was interrogated by agent Peter Keyes and asked what she saw. When Mike Harrigan was investigating a new Predator in Los Angeles in 1997, he was brought into Keyes’ command centre. He saw footage from the Anna’s interview on a monitor while Keyes was explaining what the creature was and the previous incidents involving the Predators.

When we first met Anna, she was very manipulative and untrustworthy. She spoke Spanish and she made out like she didn’t understand what Dutch and his squad was saying to her. She tried escaping at the first opportunity. When the situation became clearer to her that something was in the jungle, she began co-operating with Dutch’s team. She revealed that she can speak English and told Dutch that she had heard stories of a demon in the jungle.

Anna was originally going to have a longer segment in Predator 2 and have some spoken lines. This was cut down to just seeing a short appearance of her on a monitor in Keyes’ command centre. You can read the Whatever Happened to Anna’s Cameo Appearance in Predator 2? article for more information about her spoken lines.