When you think of the Predator, the name Arnold Schwarzenegger is not far behind in your mind. Arnie is as closely associated to the Predator series as Sigourney Weaver is to Alien. Unlike Sigourney, though, Arnie has only ever appeared in a single Predator film – the first – and he has only ever shown up once in the expanded universe.

It’s been reported in the past that Arnie was originally going to appear in Predator 2 but according to long-time Predator producer John Davis, it all came down to a quarter of a million pay deal that broke down. Arnie would go on to appear in Terminator 2 instead of Predator 2. Dutch’s role in Predator 2 was eventually repurposed to be that of Gary Busey’s Peter Keyes.

Though he was absent from the finished film, Dutch did actually make an appearance in the Predator 2 novelization written by Simon Hawke. Several weeks after the events of Predator, Peter Keyes would visit Dutch in hospital. Dutch had initially been in shock following his narrow escape of the Predator’s self destruct device. 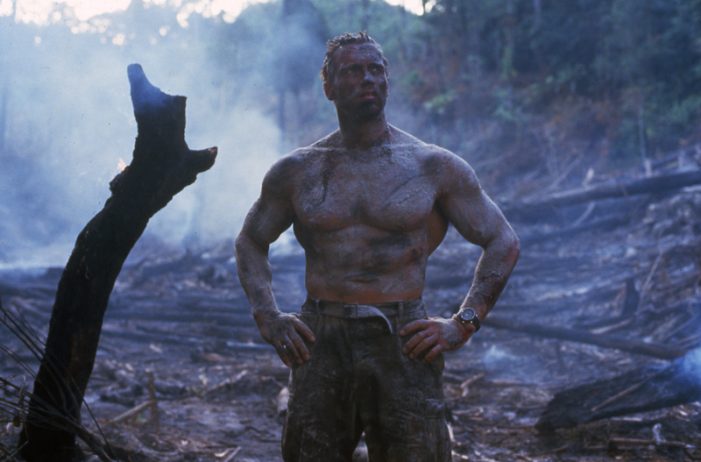 Dutch was debriefed and subjected to polygraph tests to test the veracity of his outrageous claims. Despite suffering from radiation poisoning following the nuclear detonation, Dutch ripped out his IVs, fought off orderlies and security staff and escaped, never to be seen again. The doctors believed that Dutch would have been dead by the time Predator 2 took place. Peter Keyes wasn’t so sure, though.

Though the role that was originally conceived of for Dutch was reworked into Peter Keyes, Jim and John Thomas did write a very small cameo for him in the first draft of Predator 2. Like Anna’s cameo that was eventually cut from the finished film, Dutch’s small role would have been footage of him being debriefed immediately following the events of the end of Predator. 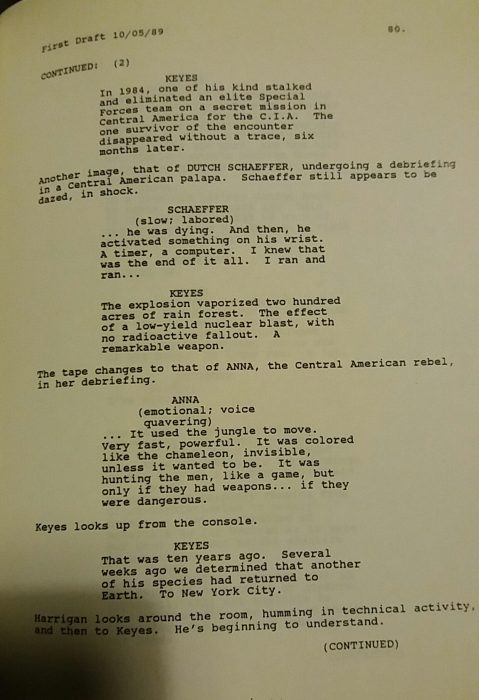 The only other released licensed material that Dutch would make an appearance in was the fantastic novel Predator: South China Sea. Written by Jeff VanderMeer and released in 2008, Dutch appeared in a series of flashbacks in which one of the main character, Gustat, seeks advice on the Predators – where to find them, how to fight them, their weaknesses and etc.

Dutch never actually reveals his name to Gustat in the novel. He is referred to simply as Onyx, due to the brand of cigar that he is always smoking when the two meet. The author did confirm in post-release Q&As that Onyx was Dutch.

Though Dutch himself doesn’t feature prominently in the expanded universe, the core trilogy of the EU revolves prominently around Dutch’s brother, Detective Schaefer. In the first ever Predator series (which is more commonly known as Predator: Concrete Jungle), Schaefer eventually encounters General Phillips from the first film.

In the comics Phillips has become the commanding officer of a specialized unit that is responsible for tracking and dealing with Predator activity on Earth. Phillips tells Schaefer that Dutch disappeared after the events in South America.

Predator: Cold War is the next series to feature Detective Schaefer. He is coerced into participating in a mission by Phillips who promises Schaefer he will provide information on his brother’s disappearance.

In Predator: Dark River Detective Schaefer’s makes his third and final appearance in the expanded universe. Schaefer comes across a man named Mercer. He claims he was a pilot who operated primarily in South America and that he was the one responsible for taxiing Phillips to pick up Dutch after the Predator self-destructed.

On the flight back Dutch started to show symptoms of some kind of infection. Worm-like growths protruded from his arms and hands, eventually spreading to his back. The pilot claims he was put in isolation for about a month but showed signs of the infection. Mercer hypothesed that the infection was transmitted by direct contact with the Predator.

Not knowing what Dutch was infected with or how to deal with the disease, Dutch was choppered back out into the jungle and left.

This turned out to be all a lie. It was all a ploy by Phillips to lure Schaefer back down to South America to confront the Predator that was believed to have been killed by Schaefer during the events of Concrete Jungle. It had survived and was on a rampage trying to find Schaefer. Dark River ended with Schaefer confronting General Phillips with a pistol, determined to get answers about Dutch. 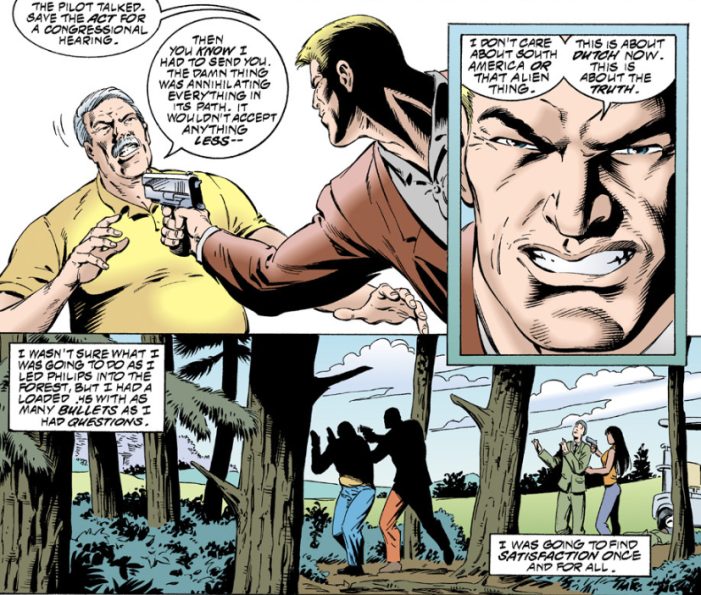 And as far as I can remember, that’s the last we see of Detective Schaefer and Dutch isn’t really given any attention in any of the following expanded universe stories. Despite his minor role in the expanded universe after the original Predator, there have been many other possibilities for Dutch.

According the Jim Thomas, one of the writers of Predator and Predator 2, an earlier idea they had for Predator 2 was that Arnie would have been specifically targeted by another Predator after his defeat of the Jungle Hunter.

Speaking at a screening of Predator in November 2017, Jim Thomas explained: “We had an idea where at the end [of Predator], with the burned up clearing where the explosion happens, [Predator 2] opens there and the Predator’s invisible feet come into view and a hand plunges down into the dust, into the ashes, and brings up the Predator’s arm and then activates the computer and get’s a readout to see everything that had happened up to that time, focusing on Arnold, and “this is my target.” We went from there and we had to think of how to bring Arnold back into it.”

Unfortunately, it would seem that the Thomas Brothers never got further with a complete draft that would have featured Dutch. The first draft of Predator 2 is not available in the public domain but it evidently followed the story for the Predator 2 as released and featured Keyes. Dutch would have appeared and given a single line of dialogue on one of the screens seen inside Keye’s command trailer. 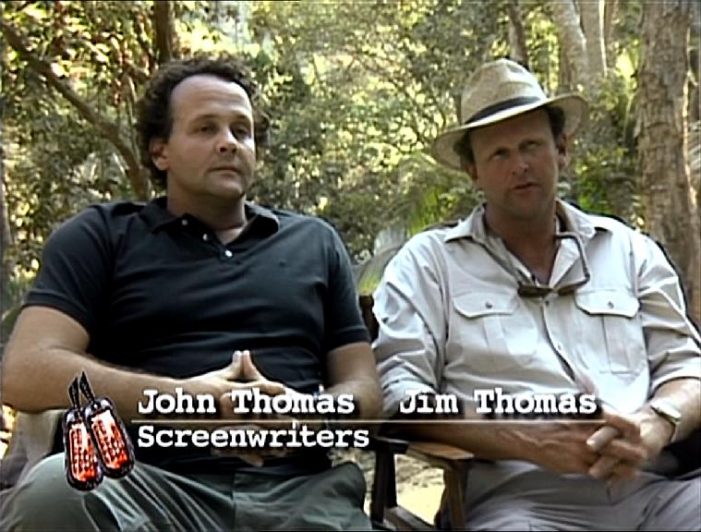 The earliest Predator 2 script that is available online, the second draft, merely mentions Dutch in passing with Keyes telling Harrigan that the one survivor from the encounter in the first film “disappeared without a trace, six months later.” This mention would be completed remove in the third draft and the finished film.

In the Making of Predator 2, Gary Busey spoke a little about what happened to Dutch after the events of Predator. According to Busey, Dutch was “lost” 9 weeks after the events of the first film. The full extent of what he meant by that is not known, though. It’s possible Busey was referring to the dialogue from the earlier draft with Dutch just disappearing.

Dutch was also written into various Predator 3 scripts. In Robert Rodriquez’s infamous 1996 draft of Predators, Dutch was once again the main character where he was kidnapped by the Earth military and taken to a Predator gladiatorial planet. Once there, Dutch was expected to have to fight against Predators and other aliens. He was given to the Predators to help maintain an unstable pact between the human and Predator governments so that the Predators would show restraint in their activities on Earth.

When the general concept of Robert Rodriguez’s Predators was revisited for the 2010 release, an early draft of the rewritten script by Alex Litvak & Michael Finch was leaked online. At the end of the script was an alternate ending that would have seen Dutch and Arnie return to the Predator series.

After defeating the Berserker Predator, known in this draft of Predators as the Black Super Predator, Royce and Isabelle had strung its corpse on the totem. A battered Predator ship lands nearby them and a dozen of Predators emerge from the ship. 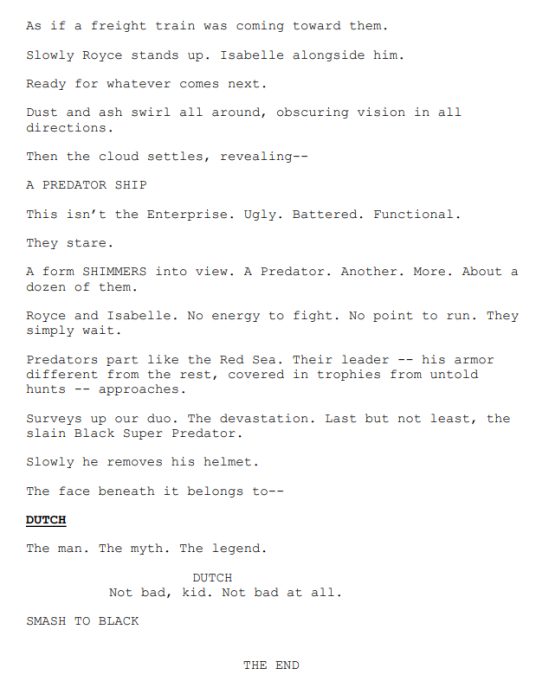 How serious this ending was is unknown. Throughout Predators’ production there were many rumours and debunks of an appearance by Arnie.  Robert Rodriguez would later confirm that he did actually approach Arnie about appearing in the very early days of the production, even offering to push back filming until after Arnold had left the Governor’s mansion.

Paul W.S Anderson, director and writer of the first Alien vs. Predator film, stated in an interview that Arnold Schwarzenegger offered to reprise his role as Dutch at the end of this movie as a cameo, but only on the condition that he lost the election for Governor of California. No details of what the cameo might have entailed have ever emerged.

As far as we are aware, Arnold and Dutch wont be appearing in the upcoming Shane Black sequel The Predator. The last we heard from Arnie about the new film was that he turned it down, stating that he didn’t like the role. He did say he would reconsider if Dutch was given a more significant presence in the film.

It’s not a secret that an early draft of The Predator leaked and has made the rounds behind closed doors. This particular draft was nearly a year old by the time the film went in front of cameras and featured a very small cameo from Dutch at the end, with only three lines of dialogue.

He introduces himself to the survivors and says that they’re at war with the Predators and that the survivors need to come with him. 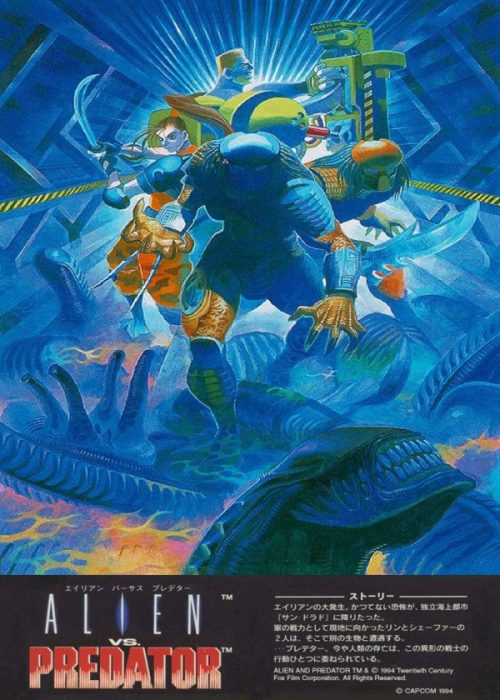 Capcom’s Alien vs. Predator arcade game, which was released in 1994, did feature a Major D Schaefer as a playable character. He’s not intended to be the actual Dutch Schaefer though. According to the character biography, the game’s Major D. Schaefer was “a cyborg created to fight extra-terrestrials. He lost his right arm in the 2nd Alien War and has since had it replaced with a smartgun rig. He lives only to avenge himself against the aliens.”

Aside from the first draft of Predator 2 and the early script for The Predator, all the scripts mentioned in this article are available to download in the AvP Galaxy Downloads section. I’d also like to thank Leigh Burne of Xenopedia for pointing me to the right pages in the Predator 2 novelization – and for actually lending me the book as well.