Aliens Colonial Marines is a 2013 first person shooter video game, developed by Gearbox and published by Sega for PC, X-Box 360 and Playstation 3. A Wii U was planned but was later cancelled. The game was first announced at the end of 2006 but took over 5 years before we would ever see it. Development was plagued with all sorts of problems and there were accusations thrown at Gearbox for mishandling and outsourcing the development. Upon the game’s release, Aliens Colonial Marines was met with extremely negative reviews. This resulted in a class action lawsuit against Gearbox and Sega for mis-representing the game in prior press videos. 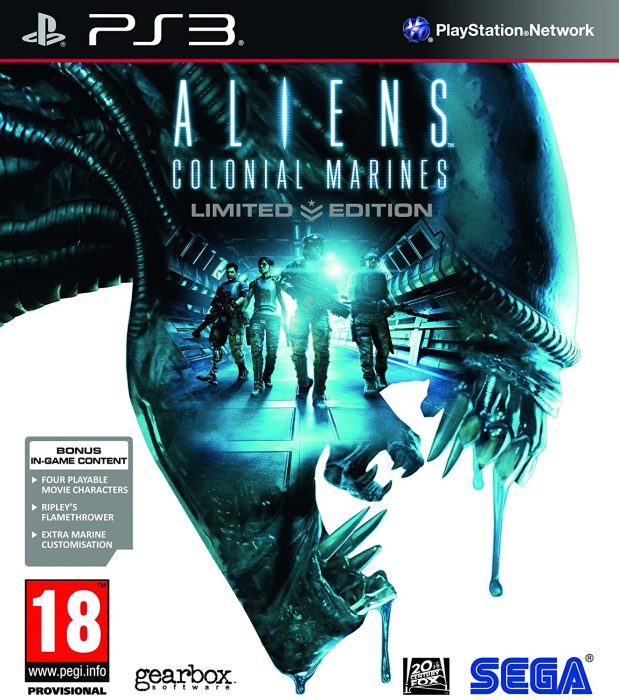 You and your friends against the deadliest killers in the galaxy. Another glorious day in the corps.

Buckle up, soldier! Welcome to Aliens Colonial Marines. Created by Gearbox, the critically acclaimed and fan-favourite developers of Borderlands and Brothers In Arms, this first-person shooter is steeped in the eerie, claustrophobic and terrifying atmosphere that made the Aliens films successful worldwide. You and your friends will become the most badass military outfit in the galaxy – the US Colonial Marines. It’s down to you to not just survive but wipe out the Xeno infestation.

Colonial Marines originally came about after a meeting with Gearbox’s creative director Bryan Martell and Alien director Ridley Scott. The meeting was about a potential Blade Runner game but the meeting covered the Alien franchise too. After Gearbox’s Brothers in Arms: Road to Hill 30 was released in 2005, Gearbox began exploring the possibility of making games based on existing intellectual property. After discussing a potential Alien game with Ridley Scott, Martell approached 20th Century Fox to get licensing rights. In 2006, Sega bought the rights and then approached Gearbox to make a video game. Gearbox already had experience in making first-person shooters and they were already fans of Aliens so they decided to make a direct sequel to Aliens.

The final script for Colonial Marines was written by Gearbox writer Mikey Neumann and he also collaborated with Battlestar Galactica writers Bradley Thompson and David Weddle during the 2007-2008 writer’s strike. The events in the game take place just after 1992’s Alien 3 and locations like the Sulaco and Hadley’s Hope were recreated for the game. Syd Mead, who worked with James Cameron to design the Sulaco, was hired to help design areas of the ship that was not in the film.

Aliens Colonial Marines was originally intended to include squad-based gameplay where you could issue commands to fellow AI-controlled Marines. Order might have been hacking doors, sealing vents and setting up Sentry Guns. In cooperative mode, players would be able to control these Marines and would each have their own strengths and weaknesses. The idea of squad-based gameplay was dropped to make the gameplay easier to understand. Gearbox said it would develop the game for Windows as well as the Playstation 3 and X-Box 360.

Gearbox was the main developer of Aliens Colonial Marines but other studios controversially had a hand in development too. Work began in the game in 2007 when Demiurge Studios spent 9 months creating a prototype and they later helped Gearbox on networking and multiplayer parts of the game. Colonial Marines was built using the Unreal Engine 3 but Gearbox spent some time developing a custom real-time lighting and shadow renderer to capture the same look as Aliens. Another game developer, Nerve Software, built multiplayer maps for the game. Gearbox did very little development on the game up until 2012 as they preferred to work on 2009’s Borderlands and 2011’s Duke Nukem Forever.

Borderlands was released in 2009 to a critical and commercial success and Gearbox started work on Borderlands 2 immediately. Gearbox then outsourced development of Colonial Marines to TimeGate Studios, who was at the time already developing Section 8: Prejudice. In late 2010, TimeGate starting working on Colonial Marines, and realised little work had been done on the game. TimeGate handled development of the game up until mid-2012 when work on Borderlands 2 was almost complete. Despite this, their work had to be constantly approved by Sega and Gearbox. The game’s script and story was still being written and entire scenes and missions had to be scrapped when story changes occurred.

There were also internal disagreements between Sega and the developers. Sega wanted a game similar to Call of Duty with less Aliens and more Marines to shoot while Gearbox and TimeGate wanted the opposite. The developers controversially increased graphics fidelity for a press demo which was run on high-end computers not meant for the public. The graphics were scaled back considerably when TimeGate realised the game’s shader and particle elements, and high-end textures wouldn’t run on the Playstation 3 or X-Box 360 hardware due to memory limitations. This later led to a class-action lawsuit against Sega and Gearbox for misrepresenting the game.

Gearbox took the project back in mid 2012 and were not happy with TimeGate’s work, particularly that the game wouldn’t run on the Playstation 3. The release date was February 2013 and as the game had been delayed numerous times already, asking Sega for a further extension was not on the table. Gearbox now had 9 months to fix what TimeGate had done and finish the game. Gearbox CEO Randy Pitchford said that TimeGate had contributed 20-25% to the game whereas TimeGate developers said 50% of the singleplayer campaign was made by them. TimeGate reportedly worked on weapons, characters, the Xenomorphs, story and parts of the multiplayer. 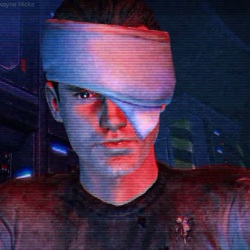 A few actors from the Alien franchise did some voice work for the game. Michael Biehn reprised his role as Corporal Dwayne Hicks while Lance Henriksen voiced the androids Bishop and Michael Weyland. Henriksen later remarked it was interesting for him to voice a character he had not touched in more than 25 years.

Michael Biehn was rather negative about the project telling Game Informer there was a lack of passion from the people in charge of the project: “That wasn’t fun at all. I just didn’t really have any fun. It seemed kind of passionless. I think in movies, television, and the gaming world, you get some people that are really, really passionate, and some people that are just going through the paces. They think that because they have a brand name they’re going to get a hit game or hit movie out of it. That certainly was the situation on [Aliens: Colonial Marines].” The Colonial Marines soundtrack was composed by Kevin Riepl who worked on many films and is best known for the Unreal and Gears of War series. It was heavily influenced by Jerry Goldsmith’s score on Alien and James Horner’s music on Aliens. 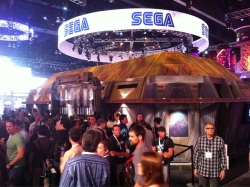 Sega announced on December 15, 2006 that Gearbox Software will be creating a first-person shooter based on the Alien film franchise which will be released on next-generation consoles. Gearbox was no stranger to first-person shooters. They’ve developed many games including Brothers in Arms, Half Life and ported over Halo to PC. 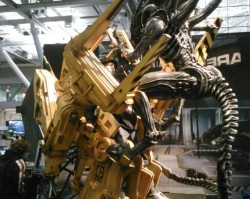 In June 2010, Sega announced Aliens Colonial Marines will be released in Spring 2012. They released a teaser trailer as well as a new promotional screenshot. The game was featured at E3 2011 and they revealed it would be released for Wii U too. The game featured at Gamescon and PAX. A new trailer was released in August 2011 for the Gamescon/Pax conventions. In September 2011, they released a 11-minute gameplay video that was shown at E3. The game was featured at the PAX East convention in April 2012 where they showed off some singleplayer/multiplayer footage.

In May 2012, Sega revealed that Aliens Colonial Marines had been delayed until February 2013. They also posted a new trailer. Some gameplay footage was released for E3 2012 in June. Over the months, developer diaries and various screenshots were released. In December 2012, Corporal Hicks posted a report about a preview event he attended organised by Sega. At the end of 2012, Sega released a new Story Trailer. A few more trailers were released in 2013: Alien Hive, TV Commercial and Kick Ass trailer.

Aliens Colonial Marines was released worldwide on February 12, 2013 and critical reception was extremely negative. It received a score of between 43 on Metacritic. Reviewers criticised the graphics and bugs, the poor AI, the singleplayer campaign and its lack of tension, and the multiplayer. The few positives were aimed at the sound and music, and the weapon and character customisation options. IGN scored it 4.5/10 saying “Aliens: Colonial Marines is an uninspired and unfinished game, and not remotely worthy as a sequel to the Aliens film.” Game Informer gave it 4/10: “Aliens: Colonial Marines’ odious mess can be smelled from low orbit, and only the most ardent Aliens fans will find anything redeeming.” 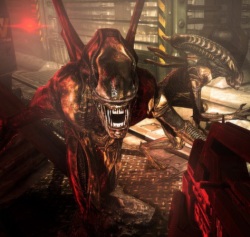 Gearbox still released patches for the game after its release as well additional downloadable content. The first was called Bughunt which was available in March 2013. It contained three new maps that are based on locations in the Aliens film. The second DLC pack was called Reconnaissance and was available in May 2013. It featured three new Team Deathmatch/Extermination maps called Grief, Shipwreck and Autopsy based on locations seen in the singleplayer campaign of the game.

The third DLC pack was called Movie Map Pack and was released in June 2013. It featured a new Survivor map called Nostromo, a new Escape map called Exodus, and two new Team Deathmatch and Extermination maps that feature locations from Aliens and Alien 3. The final DLC pack was called Stasis Interrupted which was released in July 2013. It featured a new singleplayer campaign and was developed by Gearbox Software and Darkside Game Studios. The story is about what happened to Corporal Hicks between Aliens and Alien 3.

One report said Gearbox moved resources from Colonial Marines onto Duke Nukem and Borderlands 2 but still continued to collect payments from Sega. When Sega found out about this, they tried to cancel the game which resulted in layoffs in Gearbox in late 2008. After the game’s release, Sega initially denied the claim that Gearbox outsourced it. Later reports surfaced saying that Sega knew about it and rushed through certification and shipping, knowing how bad the game was.

In April 2013, it was announced that the Wii U version had been cancelled due to the negative reception the game had received. People noticed how worse the graphics looked compared to how it looked in the early press gameplay footage. This then spawned a class action lawsuit. In May 2013, it was revealed that two people were suing Gearbox and Sega due to them misrepresenting the game at trade shows. In August 2014, Gearbox filed documents saying blaming Sega for the marketing.

Later in August, Sega agreed to pay a $1.25 million settlement which would free Sega from any more lawsuits but not Gearbox. In September 2014, Sega filed more documents blaming Gearbox for the game’s marketing. In May 2015, Gearbox had been dropped from the lawsuit and it was now no longer a class-action lawsuit. Randy Pitchford, CEO of Gearbox, did a frank interview with Eurogamer in July 2015 denying Gearbox was to blame for Aliens: Colonial Marines. He said that he lost between US$10 and US$15 million of his own money on Colonial Marines.

You can full the full news archive for Aliens Colonial Marines here.

You can find more images on Aliens Colonial Marines Screenshots.