First and foremost, I want to start off by everyone for allowing me to have a much more interactive experience today. Ikarop was kind enough to tell Sega that I would be on-hand and Gearbox knew I’d be there through the forums. I was treated amazingly well, and I really appreciate all the time that everyone took with me! Chris, the community manager of Gearbox was insanely generous with his time. He answered as many questions as he could. I really appreciated it.

That being said, on to the good stuff… A:CM had a pretty big footprint on the show floor. A replica Hadley’s Hope with two rooms in it – one a single player presentation and the other was a multiplayer room. Outside was a great photo op – a full sized (!) powerloader with a xeno attacking it. You could get in and take pictures. Also, there were Colonial Marines wandering around with a smartgun and pulse rifle. Comments from everyone around me were really positive. Lots of good feedback and the booth was one of the more popular ones on the show floor. 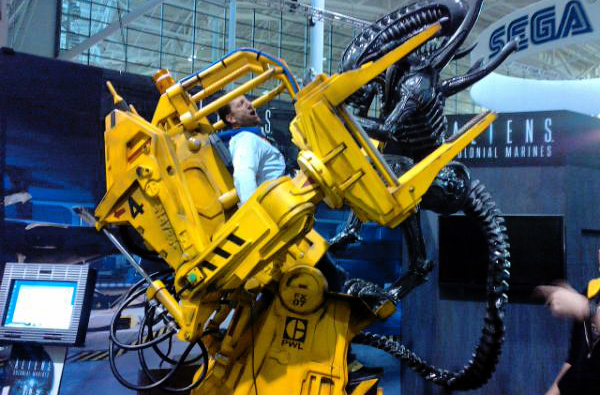 Single player mission was the exact one that surfaced a couple of days ago. Starts off as you have just woken from Cryosleep and are being told to secure the Sulaco and bring the men back safely. One thing I should mention is that the game looks MUCH better in person than the videos I saw online. The details are impressive and the lighting was excellent! Acid burned holes in the floor and walls.

The Sulaco was well represented from the movie. Little touches like seeing the lockers of the LV-426 squad really gave you some immersion. There were some things not shown in the online-portions of the video. Certain things like “Quarantine” tape (think police tape) was up over a door hinting at something more sinister (?). Once inside the hive, you see the detail of the resin. Very well crafted. Goo dripped from the ceiling and it had a hazy vibe to it. You come across bursted marines all contorted and blown outward.

You come across one that isn’t dead yet. As you rush to his side, a “lurker” (xeno from the first alien) crawls out of the wall. There is a struggle as the xeno jumps on you and you manage to kick yourself free. It didn’t look cheesy and you could tell that the xeno models had been worked on. The lurker did a good job of scrambling to hide and trying to ambush you (funny side note, Chris actually died during this encounter while showing the demo to another group – so there wasn’t a god mode enabled).

After dispatching the xeno you free the marine and he joins you as you try and locate the event log of the Sulaco. A few skirmishes ensue along the way as you are attacked by warriors. They showed a variety of path finding avenues and seemed to navigate the areas well.

Eventually you hole up and your rescued companion marine welds the door shut. You see the welder twice – once it is used by your rescued buddy and another you use it on a door. It is a context button push when you use it (ie- push square to weld door). It was not clear if this is how all door welding would occur during the game. 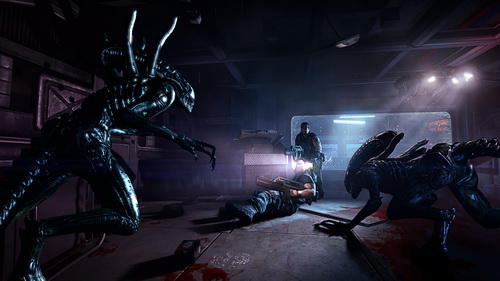 You grab the log and head to the umbilical between the Sephora and Sulaco. More skirmishes ensue and the smartgun scene in the hanger was pretty great. The smartgun is powerful, but slow to move around with.

The demo ended with you racing to the umbilical only to see your rescued marine on his knees. He screams and detonates a grenade as the burster pushes through. This is where the “uncharted” bit comes in and you navigate to the Sulaco while avoiding debris.

The demo was a good showcase and really looked the part. Details were clear and the sound was great. The experience was a mix of action and storytelling with good pacing and it impressed me. The assets looked great in the game and it all felt like it belonged in the universe – because, as Chris pointed out with Fox treating it as canon – it has to.