Day 3 felt a bit short, mostly due to the fact that most of the day was spent waiting in line for the Gearbox panel. Thankfully, the 3+ hours Newbeing and I spent in line together was really worthwhile.

To start, the panel was very popular among PAX goers. It was held in one of the largest rooms in the convention center and was PACKED. Literally, the entire place was filled with eager fans. Outside, while waiting to get in fans were treated to Gearboxers Mikey and Chris (dressed as an Easter bunny in a Gearbox t-shirt) throwing Easter eggs and mini face huggers into the line. Randy received a large ovation from the crowd and really played it up. At one point he even stopped and entered a limbo contest that broke out next to the waiting fans.

Once inside the panel room, we were treated to pizza and trivia. Mikey was asking questions and fans received t-shirts and other apparel/merch for answering correctly. The Gearbox crew were wacky and asked fans to answer some ridiculous questions or do funny tricks. At one point, David Eddings (voice of clap trap) gave away a tee shirt to whoever would carry him around on his shoulders. It was pretty crazy.

Once the panel started, we were greeted and introduced to the panelists. There were two games to talk about, but first was A:CM. The panelists included Mikey Neuman, Randy Pitchford, Brian Burleson, Chris Brock and John Mulkey. 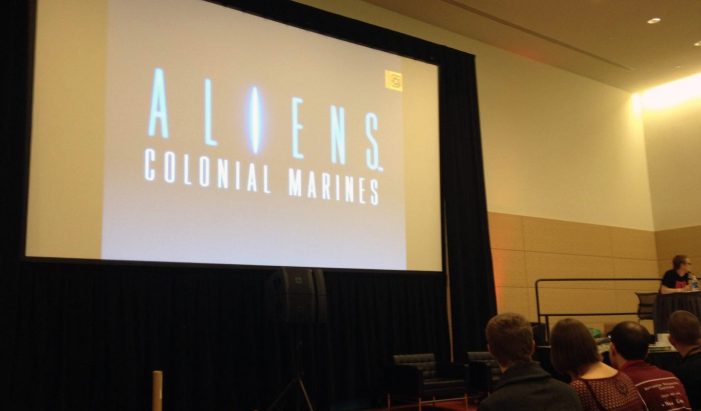 Some highlights in rapid fire (I will try to elaborate on these if you guys/gals have questions):

At this point, the panel was hurried along because of time restraints. The rest of the panel focused on BL2 (and what we saw was pretty awesome). 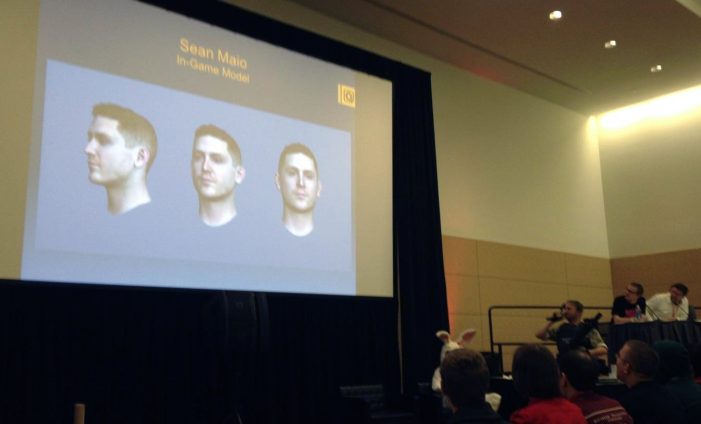 After the panel, Gearbox allowed fans to come up and talk to them about the games and meet the panelists. I had the chance to talk to Brian Burleson about the game and the challenges he faced in regards to the rabid fan-base and how difficult it is to live up to those expectations. He was really honest about it and mentioned that it was a lot of pressure because the films have been in our lives for a long time- and we’ve all grown attached to them in a certain, very personal way-so to try and be everything to everyone is hard. He did mention that as rabid and nit-picky as some comments seem to be, that in the end, there are usually some really positive discussions that come out of the suggestions and in the end, it’s up to the devs to make the best game that they can.

Chris mentioned again that the game was still slated for a fall release – but that the project (like all games) follows a roadmap of milestones, so the game will come out when they reach all of those milestones and implement everything that they want to in the game.

The final piece that we learned during the panel was that all of these little easter eggs that were hidden around PAX today contained a unique code. Each code can be registered at a GBX –specific site and there are a bunch of prizes to be won. The grand prize? A chance to NAME a character in either A:CM or Borderlands 2. Essentially by having the right Easter egg code, YOU become the Easter egg in game. Pretty clever, huh?

So to wrap up the day – it was a lot of waiting, but in the end it was all worth it. Gearbox has pushed aside any fears that I once had about this game and where they are taking the franchise. There is still a lot being worked on, but that the devs are committed to making it the best game that they can. The new trailer needs to be approved but we should see it sometime in the near-ish future.

Once again, I want to thank AvP Galaxy for allowing me to cover this event and getting me involved with Sega. The weekend would not have been the same experience without your help! I had a lot of fun and hope I was able to provide you with some good reporting! Thank you to Sega for being really accommodating and willing to answer any questions I had. And finally another huge thank you to Gearbox. I am truly impressed with the level of commitment you show to your fans and feel honored to have captivated as much of your time as I did.

Newbeing – it was awesome meeting you. Maybe we can do some focus testing on the Wii U together at Demiurge someday?

Thanks to everyone for the positive comments and for reading along!