I didn’t want to write this review. I’ve held off writing it because somehow, if I put what I’m thinking into words, it makes it all the more real. I’ve missed that window where it’s going to be relevant anyway. We’d been unable to get an early copy for review and Amazon didn’t ship my order on time.

This meant I was subjected to several days of the negative reactions of the press and the fandom. Due to the delay I had a small window in which Amazon would have let me cancel my pre-order and I must admit, I very nearly took that opportunity. Was I really willing to spend £70 on the Collector’s Edition? That is completely unlike me though. I prefer to make my own opinion rather than get swept up in a tide of internet opinion. But I ended up biting the bullet and letting the order go through…

Aliens: Colonial Marines has been in development for 6 years. Any game in development that long will naturally come with some high expectations. Let’s add the generally high expectations of fandom to the hyperbole that Gearbox and Randy Pitchford consistently vomited out: – The game was canon, it was an authentic experience, the sequel to Aliens we’ve been waiting for and how it made Alien 3 a better movie…

I suppose I can relent and give them that last one but more for the quality of the single player story than anything that the game contributed to the overall mythology of the Alien series.

I’m not going to mercilessly slaughter this game because I’m not interested in coasting along with the craze that has become the mocking of this game. I’m just so disappointed in what we, as the consumer, were fed. I imagine this is what it feels like, as a parent, when you utter those words to your spawn: “ I’m not angry. I’m just disappointed.”

I won’t get into the whole debacle surrounding the development of Aliens: Colonial Marines but I will acknowledge that there seems to be some sort of saga around who developed what. Was it Gearbox, was it Timegate, did Sega know about all this? I’ll just talk about the game.

Gearbox and Randy Pitchford had promised us an experience that would enhance our experience of the films. He had told us to expect a game that was an official, canonical sequel to Jim Cameron’s favourite Aliens.

Colonial Marines opens with the Sulaco in orbit of LV-426, set 17 weeks after the end of Aliens. The last we saw the ship it was on its way past Fury 161, ejecting the EEV that contained Hicks, Ripley and Newt. So why is it back at LV-426? This promises to be an interesting mystery!

We play as Corporal Winters, a Colonial Marine from the Sephora, sent to investigate a distress sent out by Corporal Hicks sometime during the end of Aliens. He is sent to the Sulaco and finds the ship infested with Aliens. Sometime since the end of Alien 3, the Sulaco has become a floating laboratory at the hands of Weyland-Yutani. Their mercenaries (PMCs) are as deeply rooted in the ship as the Aliens.

As the campaign progresses, me and my ultimate squad of badasses (wrote for effect; the AI in this game makes your squad mates anything but badass, let alone ultimate) fight our way through the Sulaco, down onto the surface of LV-426 and into the remains of Hadley’s Hope, through a W-Y facility, into the Derelict and a final battle onboard another ship. 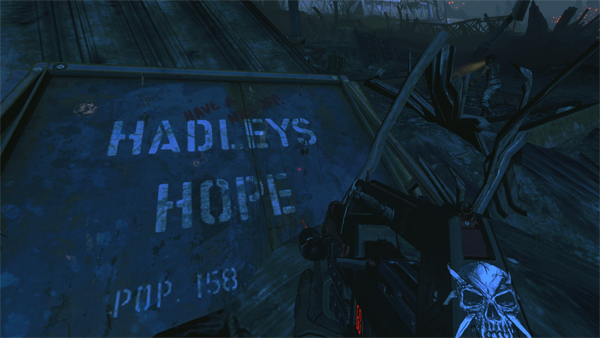 I’m not sure where to start with this. Apparently the story was supposed to have been written by Bradley Thompson and David Weddle of Battlestar Galactica fame but it would seem the only evidence of that is the term nugget. What we are given is a story that is full of inconsistencies (Hadley’s Hope still standing despite the massive nuke going off right beside it) and one track character motivation (“We never leave marines behind!”).

I think the worse part of it is the “big reveal” towards the end of the campaign. Gearbox/Timegate have resurrected Corporal Hicks. As awesome as it was to hear Michael Biehn voicing Hicks again (“Oh…Here again”), my namesake’s inclusion into the game served as nothing but fan-wank for the corner of fandom that thinks Alien 3 was terrible simply because “they killed Hix and Noowt!”

What hurt it the most was that his inclusion in the story was completely shoe-horned. When asked how he could be alive, Hicks goes on to explain that Weyland-Yutani boarded the Sulaco prior to it passing Fury 161 and revived him. They intended to (and did) torture him for information regarding LV-426 and the Aliens. So…they decided to revive the Colonial Marine Corporal (who probably had training against this kind of thing) instead of, I don’t know, simply downloading the data from Bishop or torturing Ripley – the civilian who had more experience.

Or better yet – revive them all. Upon his awakening, Hicks had a little bit of a firefight with the PMCs resulting in the fire that ejected the EEV (retconing the face-hugger). One of the characters asked who was in the EEV in his place and this is addressed with a throw-away comment of “that’s a longer story”. I groaned at this point.

As is expected with Alien games we’re treated to a set of new variants in the Raven, Boiler, Spitter and Crusher. I liked that we got a different set of creatures as opposed to the traditionally used Praetorian or variants from the other games.

These new creatures all seem mutated and different somehow. Good job I’ve been following the promotion and interviews because I know this is caused by radiation from the atmospheric processor explosion because it is not addressed at all in the narrative of the game. Instead what gamers are treated to are completely mutated appearances of the Aliens without a clue as to why they look so strange. 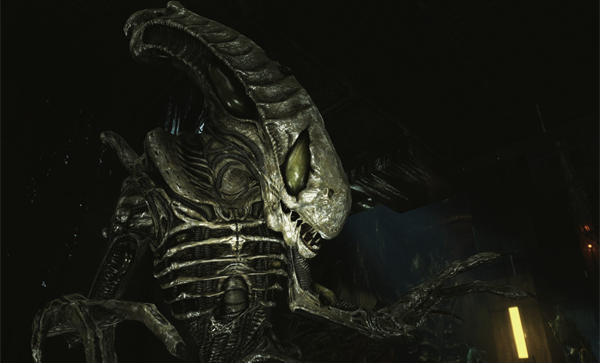 I do like the designs and their concepts. I think the creepiest section of the single player campaign is when you are being chased through the sewers by the Raven, having to navigate your way, unarmed, through the Boilers. I thought it was genuinely creepy. The first time.

This particular section also demonstrates the game’s lacking AI and dodgy animation on subsequent playthroughs. There are numerous videos and memes online showcasing un-exploding Boilers and their comical gait.

This isn’t the only time either. Throughout the game you’re facing Aliens that will work their way right up to you and do nothing. Squad mates who will shoot at random directions, who won’t take cover. And then there are enemies that will simply run past you…Honestly…What on Earth happened here?

I did really enjoy the sections aboard the Derelict. While all games seem to be keen to give us a the current generation version of Hadley’s Hope or a similar colony, we haven’t had a Space Jockey/Engineer location since Aliens vs. Predator 2 in 2001 and we haven’t been in the Derelict since that short section in Rebellion’s Aliens vs Predator (Classic) (that short boss fight in Aliens Infestation aside).

Called the Origin in the game, we’re offered a short exploration of the ship which features a nice mixture of the Alien and Prometheus-style aesthetics. Given the love-it-hate-it nature of the recent film, I know many were worried about any possible connections. The only other connections are the inclusion of an occasional “pup”, the mapping device used by Fifield and an easter egg which shows a hologram of the Derelict engaged in a fight with another Jockey ship. 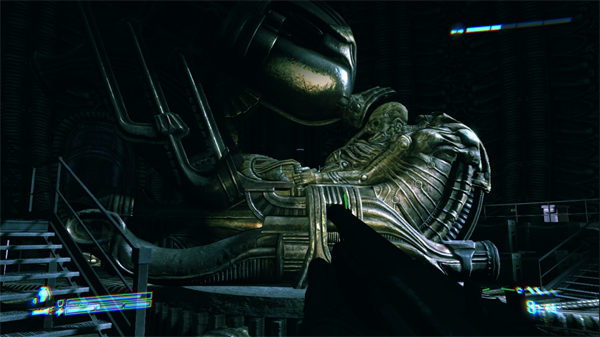 And that little musical cue when you first enter the Pilot’s Chamber was wonderful. It genuinely brought a smile to my face.

I really loved the chance to battle my way through the FTL engines and into the massive bridge of the warship.