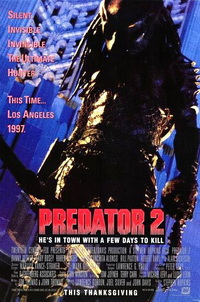 In the sequel to the Predator movie, a new Predator travels to Los Angeles to hunt for fun. Directed by Stephen Hopkins, who later went onto direct Lost in Space, the film is set in 1997 and Los Angeles has been overrun by angry Columbian and Jamaican gangs. When Lt. Mike Harrigan, played by Danny Glover, and his team find a room with Colombian bodies, they think the Jamaicans are innocent of this crime because of the way the people were killed.

Later when a few Jamaicans are killed in the exact same way, they start to wonder that there’s someone or something else killing these people. Before Harrigan and his team can investigate, a government agent, played by Gary Busey, warns them off and when Harrigan’s partner dies like the gangs, he ignores his orders and decides to investigate himself.

The Thomas brothers, who wrote the first film, were hired again to write the sequel. The first few issues of the first ever Predator Concrete Jungle comic book series was released as Predator 2 went into pre-production. Written by writer Mark Verheiden, it sees Dutch’s brother track down a Predator in New York city. Reportedly, producer Joel Silver sent his representatives as well as the Thomas brothers to talk to Verheiden to see where the comic book was headed. The story in Predator 2 is very similar though Los Angeles was chosen as the film’s setting.

Director Stephen Hopkins had previously directed Dangerous Game and was just about to finish Nightmare on Elm Street 5, when he was hired for Predator 2. Hopkins hadn’t seen the first Predator until he was hired and he spoke to its director John McTiernan and had a good chat with him about it. By this point, the script still hadn’t been finished and Hopkins was sent a 60-page treatment. 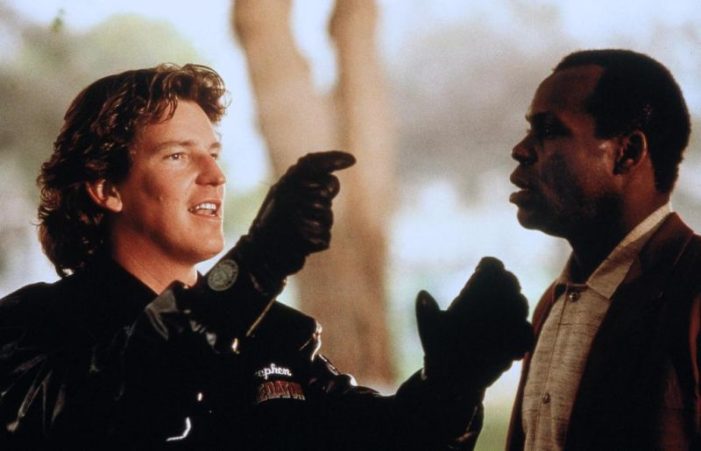 Arnold Schwarzenegger was asked to reprise his role as Dutch Schaefer in Predator 2 but there are few varying accounts of why he didn’t do it. Some early reports suggested he didn’t like the story while producer John Davis said in 2011 that the deal broke down when Schwarzenegger had asked for $250,000 more than what they offered him. In our interview with Stephen Hopkins in 2021, he said that James Cameron told Schwarzengger that if he did Predator 2, he wouldn’t be able to do Terminator 2. So Schwarzengger just did Terminator 2 instead.

The opening of the film would have taken place on a golf course with a man with grey hair playing golf when an helicopter suddenly lands. Men get out and the man with grey hair turns around and it’s Dutch. Schwarzengger was always going to play the same Dutch character who would team up with Harrigan to take down the Predator. 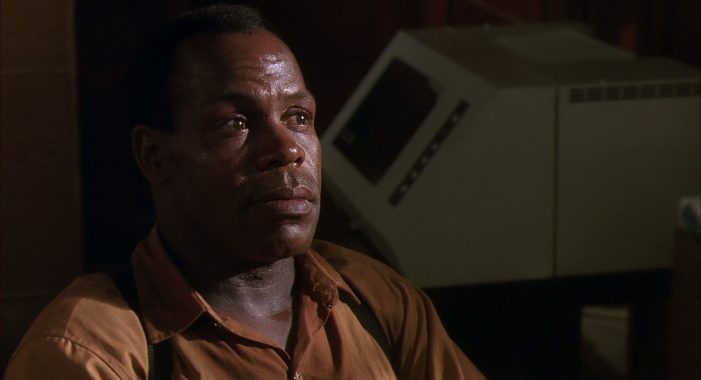 Danny Glover was cast as Harrigan

Elpidia Carrillo reprised her role as Anna from Predator but the two scenes she was in were cut and she only appeared on a video screen in Agent Keyes’ trailer. Patrick Swayze was approached to star in the film but was unable to because he was injured during the filming of 1989’s Road House. Steven Seagal was also considered. Hopkins even went to his house to talk about it but Hopkins just didn’t like him. The role of Harrigan eventually went to Danny Glover who had just done Lethal Weapon. Rounding off the other detectives were Ruben Blades, María Conchita Alonso and Bill Paxton.

The Predator in Predator 2 was designed to look more urban and hip than the one in Predator. They added a tribal ornamentation on the forehead, brighter skin and added more fangs.

Filming for Predator 2 officially began on February 20, 1990 and ended in June 1990. Producer Joel Silver was on the set of Die Hard 2 quite a lot at the time Predator 2 was filming which had numerous issues and went over-budget. When Hopkins needed Silver, he was always there. Silver eventually ended up getting chucked off the Predator 2 set as he was always going up against 20th Century Fox. He was allowed to come back for some of the sound mixing. As a result of the problems on Die Hard 2, 20th Century Fox kept a closer eye on what was happening on Predator 2.

One little bit of controversy happened when Hopkins was trying to shoot a night scene and only had moments left before it was daylight. At the time, actor Ruben Blades was giving a live interview with Joan Lunden for Good Morning America and Hopkins didn’t realise. He ordered him back to do the scene in the middle of the interview. The next day Hopkins was surprised to find many messages on his answering machine about it. Both Hopkins and Blades went back on the show the next day and Hopkins apologised. 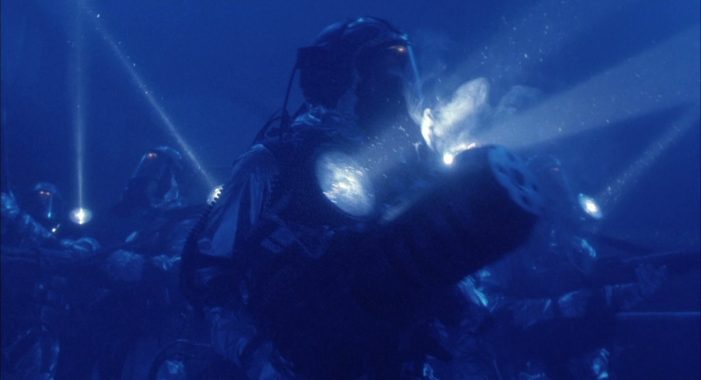 The Slaughterhouse sequence is very reminiscent of Aliens.

One of the most complicated shots to film was the slaughterhouse sequence. It was shot in Culver City in an old warehouse. The ultra-violet lighting was very difficult to get right. Everybody had to wear masks and they had to keep all the dust in the air.  There was all the choreography with the Predator on wires fighting everybody. On top of that, you had to have different points of view from lots of characters. So in the scene in Keyes’ command centre – they had to make sure all the videotapes were perfectly aligned so they would sync up. This scene was inspired by James Cameron’s Aliens where we see the different points of view of the Colonial Marine’s from the APC.

One of the big surprises in the film is the presence of the Xenomorph skull in the Predator’s trophy cabinet. When Hopkins was in Stan Winston’s workshop, he saw lots of skulls on the wall and said “We have to have this in the film”. The skull wasn’t in the original script but Hopkins storyboarded it in there. 20th Century Fox really wanted to cut it out. In the original cut of the film, it was in the film a lot more. You would have seen it after King Willie was killed. Hopkins fought to have the scene in because as an Alien fan, he would have loved to have seen that.

Shortly after filming had finished, somebody had stolen various props from the set including a xenomorph skull. It still has never been recovered. There was very little time left for editing and doing visual effects so they were done at the same time as they went along. Alan Silvestri who composed the music on the first film came back to do the sequel. They’d taken a lot of score from the first film but re-recorded it at Skywalker Ranch with a huge orchestra. 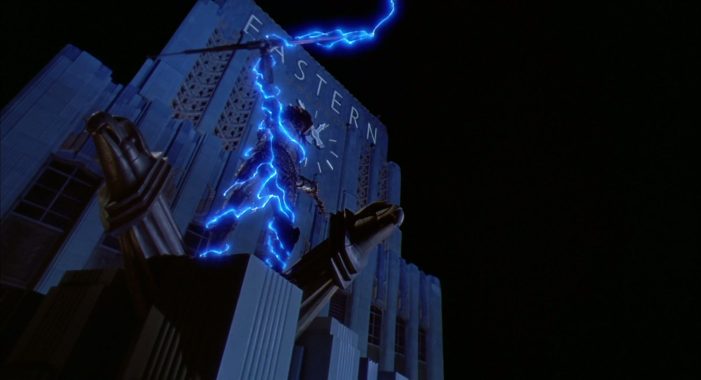 Predator 2 was originally rated NC17 because of the extreme violence.  They had to do frame by frame cuttings to tone down the gory aspects of the film. There was a moment when they thought maybe they should just release the film as NC17 but there are lots of repercussions with that. Like not being allowed to advertise in newspapers so it was a choice the studio wasn’t willing to make.

A few more scenes were cut out including a subplot involving Maria’s pregnancy and the chase sequence was longer when Harrigan follows the Predator to the slaughterhouse. The film was edited down and received a R Rating from the MPAA. To this day, the NC17 version or even any deleted scenes have never been released on any media releases.

Predator 2 was released on November 21, 1990 and it entered the U.S. box office at number 4, grossing $8 million. It grossed $30 million domestically and its worldwide total was $57,120,318. While it made more money than its $35M budget, it will still considered a disappointment when compared to the previous film.

Like the original Predator, it received generally negative reviews from film critics. It currently has a 25% Rotten rating on RottenTomatoes based on 24 reviews. Most of them did however praise Danny Glover’s performance as Harrigan. Like the first film, Predator 2 has developed a cult following and many fans of the series really like the film. 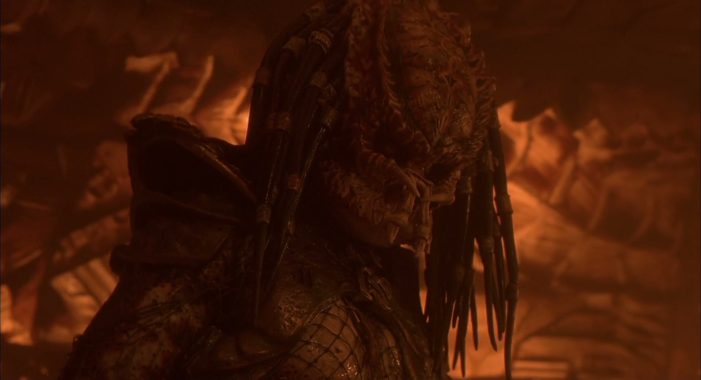 In preparation for Predator 2‘s 30th Anniversary in 2020, Disney/Fox were going to re-release Predator 2 in cinemas with a brand new transfer based on the 70mm print with new colour grading. Hopkins and Peter Levy oversaw it. But after The Predator was released in 2018, the studio assumed it would re-ignite the Predator franchise but it really didn’t. So the new anniversary re-release of Predator 2 was shelved.

Predator 2 was originally released on VHS in 1996 and later came to DVD in 2001.  The original DVD release was a barebones release and didn’t contain any special features. 20th Century Fox then released a 2-Disc Special Edition in 2005 which contained audio commentaries from director Stephen Hopkins, and writers Jim and John Thomas, as well as many behind-the-scenes and special effects featurettes.

A Predator 2 novelization was written by Simon Hawke and released December 1, 1990. It gave a little more information about what happened to Dutch from Predator. Agent Keyes said he was hospitalised from radiation sickness but escaped and never seen again. The novel tells a lot of the story from the predator’s point of view such as how it felt humiliated when Harrigan removed its mask and why it didn’t kill Cantrell due to her pregnancy.

A Predator 2 video game was also released for the Sega Mega Drive/Genesis in 1992. It was published by Acclaim and developed by Teeny Weeny Games. It’s an action game where you can guide Harrigan through seven levels as he tracks the predator and deals with drug gangs. NECA have released numerous action figures based on Predator 2. Hot Toys have also released various Predator 2 figures including the City Hunter Predator, the Shadow Predator, the Guardian Predator and the Elder Predator. No figures based on the actual characters have ever been released though.