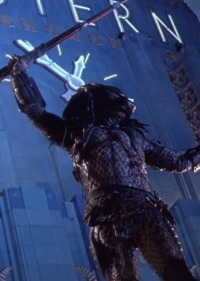 The City Hunter Predator is the creature that appears in the 1992 film Predator 2 directed by Stephen Hopkins. The Predator was designed and created once again by Stan Winston and his team, and is portrayed by Kevin Peter Hall. In the film, he comes to Los Angeles during the heatwave and gang war of 1997. He is eventually killed by Mike Harrigan aboard his spaceship.

Like the Predator in the first film, City Hunter has superhuman strength, resistance, quick reflexes, and stamina. He features the same weapons and equipment as Jungle Hunter but with a few new additions. City Hunter generally prefers to use hand-to-hand weapons rather than relying upon the shoulder cannon. The Predator uses the following weapons and equipment in the film:

The Predator came to Earth after viewing the records of the previous Predator’s activities in the jungles of Val Verde. It arrived in Los Angeles in 1997 as part of a group of Predators though City Hunter is the only one to have actively hunted in the city. The Predator killed a group of Columbians as they were in the middle of a firefight with the LAPD. One of the Columbians was left hanging from the ceiling. Upon the roof, the Predator has his first encounter with Detective Lieutenant Mike Harrigan though he doesn’t attack him.

The Predator appears later when the Columbian’s rivals, a Jamaican voodoo gang, kill their leader. It kills everybody in the room apart from the girl, using his shoulder cannon, wristblades, speargun, netgun and combi-stick. When Harrigan discovers them later, they’ve been skinned and hung from the ceiling. Detective Danny Archuleta returned to the scene later to recover a spear in the vent but the Predator was waiting and killed him. 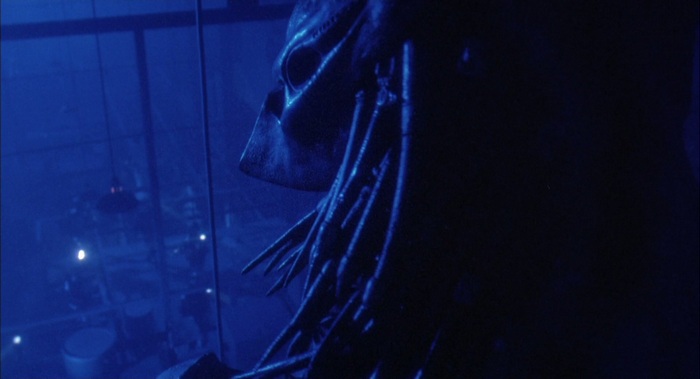 The Predator began stalking Harrigan and followed him to an alley where Harrigan met with the Jamaican gang leader, King Willie to discuss the killings. When Harrigan leaves, the Predator strikes, beheading King Willie and taking his skull back to his ship as a trophy. The Predator stalks Harrigan to the cemetery where he leaves Archuleta’s necklace for Harrigan to find.

The creature decided to kill Harrigan’s colleagues to enrage him and make the final hunt more exciting. The Predator made its way to the subway where he killed many people including Jerry Lambert and almost killed Leona Cantrell but stopped when he realised she was pregnant. Harrigan made it to the scene and chased the Predator but lost it near the slaughterhouse. The Predator had climbed onto a skyscraper and presented Lambert’s skull while lightning struck his combi-stick. 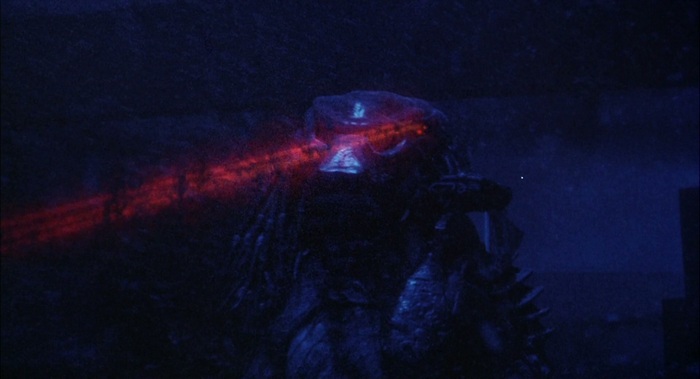 The Predator retuned to the slaughterhouse which he had been using as a food source throughout his time in the city and was ambushed by Agent Keyes and his team who had been monitoring him. They had wanted to capture the creature in an effort to study him and his technology. Keyes’ team used special suits to hide their body heat and make them invisible but the Predator quickly adapted and changed his vision modes. He saw the light coming from their ultraviolet torches and attacked them with his wristblades and combi-stick. Harrigan arrived in the slaughterhouse and shot the Predator, disabling his shoulder cannon and injuring his chest, leg and abdomen.

While incapacitated, Harrigan removed the creatures mask. The Predator regained consciousness and sliced Keyes in half with his disc weapon and continued to fight Harrigan on the roof. As the Predator hangs over the building, he activates his self-destruct device but Harrigan slices the creature’s arm off with its own smart disc. The Predator fell into an apartment and used his medi-kit on himself and continued down into the sewers. Harrigan followed the Predator to its spaceship and fought him in hand-to-hand combat. Harrigan sliced his stomach open with his own smart disc. The rest of the Predators from the hunting party materialised and offered Harrigan a flintlock pistol as a reward. Harrigan escaped the ship and the Predators flew off. 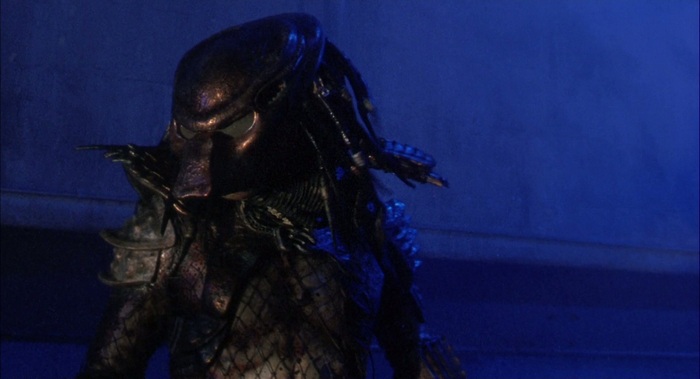 Stan Winston was once again hired to handle the creature design. To distinguish City Hunter from the first Predator, director Stephen Hopkins wanted a more urban and hip look. So the creature’s forehead was designed to be shallower and steeper and included a circular horned ridge. Thorn-like protrusions were added to his mandibles and the lower set had gums. Stan Winston had a lot more time to design the Predator this time so the design had much more detail than before and the creature’s skin tone was darker than previously. Two body suits were made for filming with an articulated head and a static stunt head.

A special animatronic bust was created which was capable of much finer movements.  This was used for close-up shots of the Predator. The Predator’s mask was redesigned to be more angular and bronze in colour and his armour had ridged patterns and coloured to match his mask. The armour was created separately this time around instead of being moulded onto the suit like in the first film. Some unused weapons from the first film were reused here including the speargun and combi-stick. New weapons were created such as the smart disc and netgun. 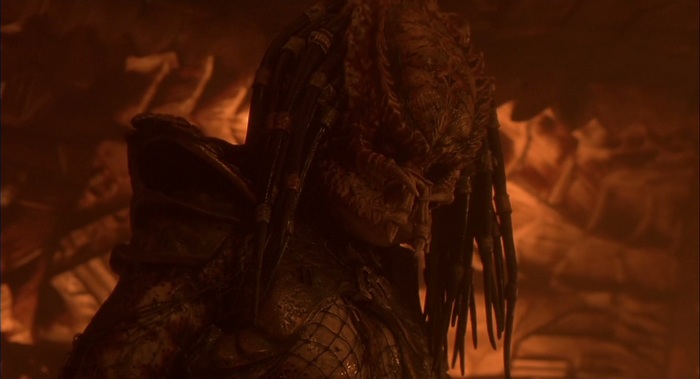