Agent Adam Garber is a CIA agent and a member of the OWLF program. After Agent Keyes, he was second in command and the group attempted to capture a Predator in Los Angeles in 1997. He was eventually killed by another Predator in 2022. Agent Garber is portrayed by Adam Baldwin in 1990’s Predator 2.

After suspecting a Predator was in Los Angeles, Agent Keyes took a small group of men including Adam Garber with him to try and capture it. Keyes and his men went undercover as DEA agents who had been “tasked” to deal with the drug and gang wars in the city. This story was concocted so they could get cooperation with the local police department to find the Predator.

Lieutenant Detective Harrigan of the Los Angeles Police Department was repeatedly warned by Agent Keyes to stay of federal business and leave the gang wars for them to deal with. Harrigan was very suspicious and told Jerry Lambert to set up a surveillance on Keyes and find out where he goes. Garber helped set up radar stations across the city to monitor where the Predator is going. They realised the Predator visits the slaughterhouse to feed every two weeks and set up a command centre there.

After studying the creature, Keyes’ team set up a trap. They know the Predator can turn invisible and their cameras can detect its pheromone signature. Therefore, he pumps radioactive dust into the slaughterhouse which clings to the Predator’s body, making him his cloak ineffective. Harrigan tracks the Predator to the slaughterhouse district and is captured by Keyes’ men. Inside the command centre, Keyes and Garber finally reveal to Harrigan who they are and that they are dealing with an alien creature from another world. 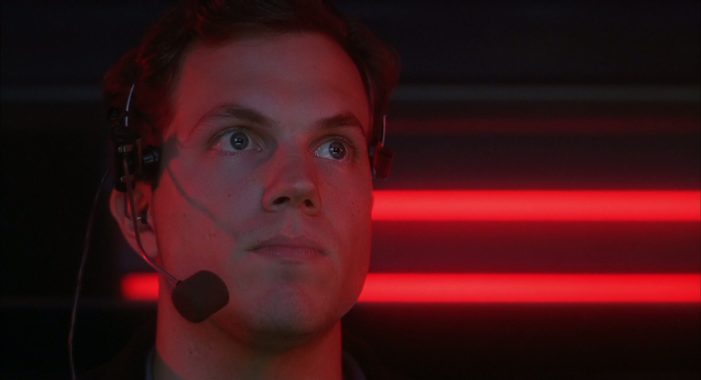 Keyes realises the Predator is now inside so he takes a team into the slaughterhouse to try and capture the Predator while Garber and Harrigan stay behind watching the events on the monitors in the command centre. Keyes suspects the creature can only see in heat vision so his team wear special body suits that hide their heat signatures. Along with the suits, they have ultra-violet torches and weapons that are carrying liquid nitrogen so they can freeze the Predator.

Inside the slaughterhouse, Keyes and his team explore the area. The Predator is high above them and hears something but can’t see the team. It’s now revealed the City Hunter has multiple different vision modes and he switches his vision modes to see ultra-violet light. The light from the team’s torches are now visible. He Predator also realises his cloak cannot work because of the radioactive dust. The Predator circles around the team. Harrigan in the command centre realises the Predator can see them and tries to warn Keyes. Harrigan is restrained but escapes the command centre. After Keyes is killed, Garber and the remaining team disappear.

As the Predator ship leaves, Garber and the remaining members of OWLF land in a helicopter. He sees Harrigan emerging from the trail covered in ash. Garber exclaims that they were so close to capturing it. As the local police department are arriving on the scene, he then gets back in the helicopter and flies off.

Dutch Schaefer arrived just after the events in Los Angeles and was captured by OWLF in the same alley that Harrigan and the City Hunter were hanging above. Dutch gave OWLF the telescoping spear from City Hunter as well as a functioning Predator mask. Dutch and OWLF came to an arrangement and now Dutch was working alongside OWLF to track Predators.

In September 1997, Garber was chosen to lead OWLF operations and he chose Peter Keyes’ son Sean Keyes to help him directly with research and operational missions. Garber secured a huge extension to their funding after the group presented a Predator mask and severed arm. Sean Keyes convinced Garber to keep Dutch off the record as it was better to keep Dutch working alongside them rather than for them. Over the next twenty years, OWLF had numerous Predator encounters but by 2015, Predator sightings were dwindling and the funding for OWLF was cut. OWLF was officially shut down in 2016 when Stargazer took over the operations.

By 2022, Garber has left his former role and now sells high-tech weaponry to groups. In 2022, in Brazil, he bumps into Harrigan again and they both get caught up when a Predator descends on the villages and hunts the gangs. Garber is ultimately killed when the Predator blasts him with his shoulder cannon.

Garber was a very loyal member of OWLF and was second in command of the team after Agent Keyes. When Keyes was ambushed in the slaughterhouse, Garber lost control and it was clear, he didn’t know what to do.

Garber appears in Drug War which is a short story written by Bryan Thomas Schmidt and Holly Roberds as part of the anthology Predator: If It Bleeds. Mike Harrigan is now retired from the LAPD and now advises police forces around the world about how to stop gang violence. In 2022, while in Brazil, he bumps in to former agent Garber who is now selling high tech weaponry. Both of them get caught up when a Predator descends on the villages and hunts the gangs. Garber is ultimately killed when the Predator blasts him with his shoulder cannon.

Garber makes a couple of appearances in the 2020 novel, Predator: Stalking Shadows. The novel recounts the events at the end of Predator 2 with Garber seeing Harrigan covered in Ash. In the novel, Dutch is actually in the helicopter with Garber. At the end, Dutch and Garber recruit the character Scott Devlin into OWLF to run the command centre as the number of Predators appearing around the world has increased significantly.

Garber is mentioned in the 2020 video game Predator: Hunting Grounds. There are numerous references to OWLF and their operations from 1987 to 2016 are detailed through the use of tape recordings spoken by Sean Keyes and Dutch Schaefer. One tape mentions that Garber became the leader of OWLF after the events in Los Angeles.