When people cross paths with the wonderfully talented actress Elpidia Carrillo, they usually want to know about her experience co-starring in Predator.  Even though she has played other substantial roles opposite big Hollywood actors like Johnny Depp and Will Smith, since that landmark 1987 science fiction film Carrillo has confessed that she is still mostly known for her role as “Anna”; a member of the guerrilla army operating in Val Verde that is captured by Alan “Dutch” Schaefer’s team of mercenaries, only to be systematically picked off by an alien hunter one by one.

Carrillo often likes to jest about her iconic part, like in an 2014 interview with Latin Heat where she revealed: 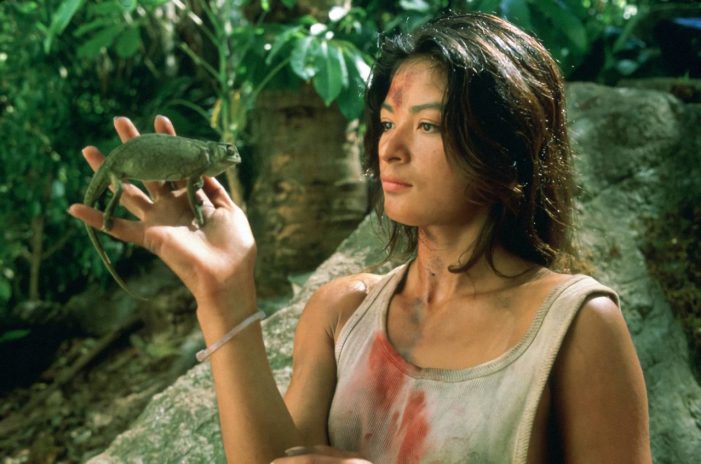 What many do not realize, including some Predator fans themselves, is Elpidia Carrillo’s Anna also appeared in the 1990 sequel Predator 2!  In fact, Elpidia’s character actually holds the distinction of technically being the only reoccurring character in the entire Predator franchise, including the title characters themselves.

Anna’s brief reappearance occurs during an exposition scene between actors Gary Busey and Danny Glover where Agent Peter Keyes explains to Detective Mike Harrigan exactly what kind of creature they’re up against. In a blink or you’ll miss it moment, Anna can be seen on one of the small monitors in the background. 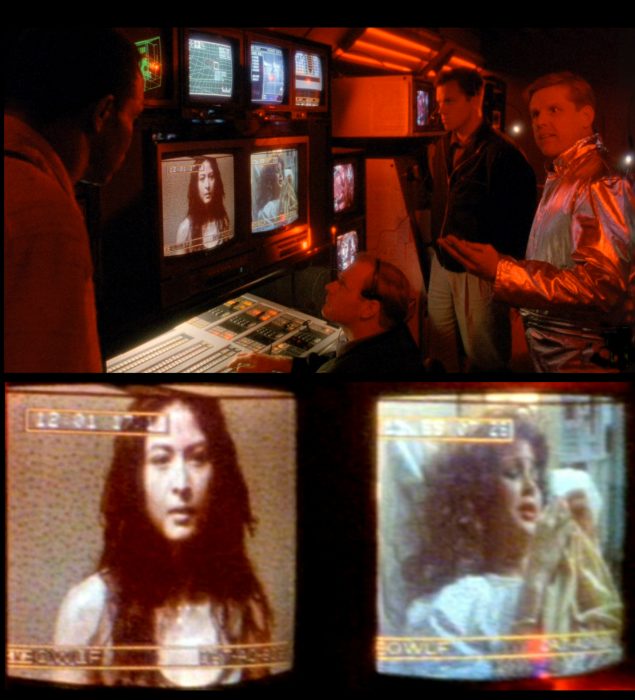 One might naturally assume this footage of Anna was simply some sort of ‘Easter Egg’, maybe leftover test screening footage of actress Elpidia Carrillo when she tried out for the role in the first Predator film, but that was not the case.  Anna’s appearance in Predator 2 was brand new footage!

The genesis of Elpidia Carrilo’s return can be traced back to the first draft of the Predator 2 script dated October 5th, 1989. In an effort to draw a strong bridge between the original Predator film and its sequel, writers Jim and John Thomas penned a brief return for Anna and Dutch Schaeffer in the form of recorded footage.

Shown to Detective Mike Harrigan in Keyes’ mobile command center, both characters were to reappear in excerpts taken from a debriefing after the events of the first film, recorded in a Central American palapa; an open-sided dwelling with a thatched roof made of dried palm leaves. 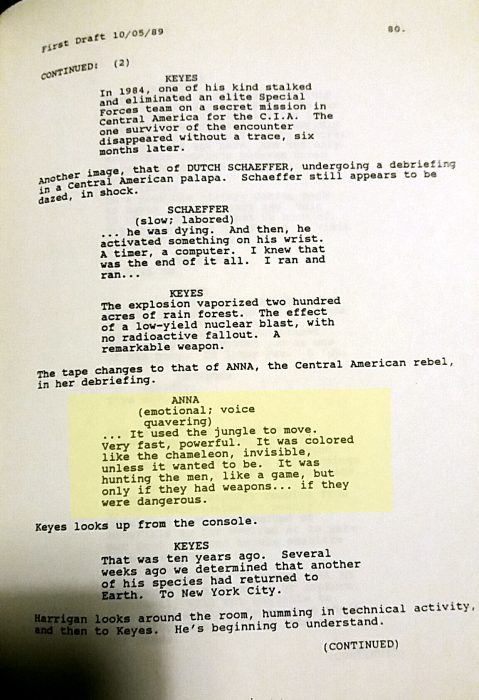 However, by time the second draft was completed on December 15th, 1989, bringing back Elpidia Carrillo in the role of Anna was no longer the plan. Once it was revealed to writers Jim and John Thomas that the production could not secure an appearance from actor Arnold Schwarzenegger, both Anna’s and Dutch’s appearance were completely re moved. 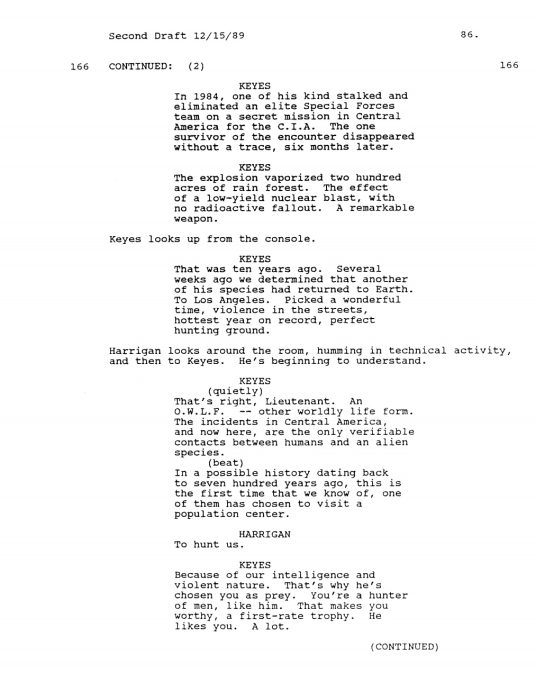 Then something changed. It could have been the Thomas brothers, director Stephen Hopkins, producer Joel Silver or all three, but something or someone convinced Jim and John Thomas that a stronger link between the original Predator movie and its sequel was still required, and they would use the character of Anna to do it.

In the third draft of the Predator 2 script dated January 16th, 1990 they re-inserted an excerpt of Anna’s debriefing, with slightly different lines and no mention of the Central American palapa setting. 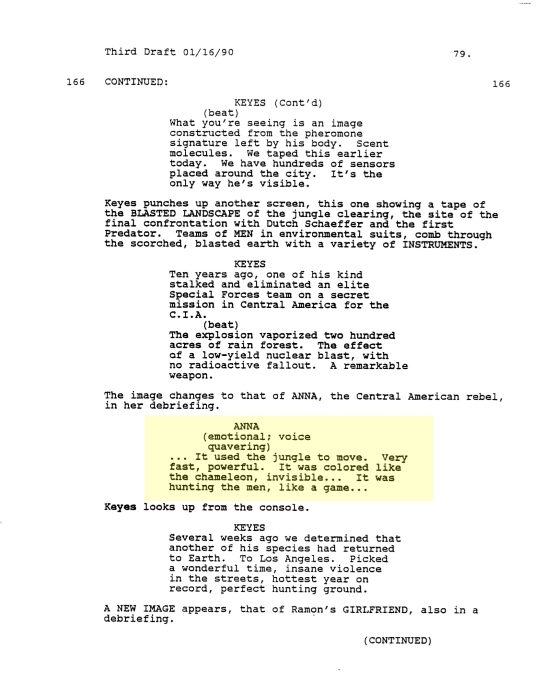 Were these the same lines that Elpidia Carrillo was given to read while cameras rolled during the production of Predator 2?  While an official shooting script of Predator 2 does not exist in public circulation, praised American science fiction and fantasy writer Simon Hawke was hired to pen the novelization of the film for Jove Books released in December 1990 and he believes he was provided the final shooting script.

Speaking recently to AvPGalaxy, Simon Hawke recollected the material he worked from:

“I don’t believe it was a draft. I think it was basically the shooting script, though I can’t swear to that. I just recall that pretty much everything that was in the script was in the movie. Minus, of course, the kind of character development and description you would have in a novel.” 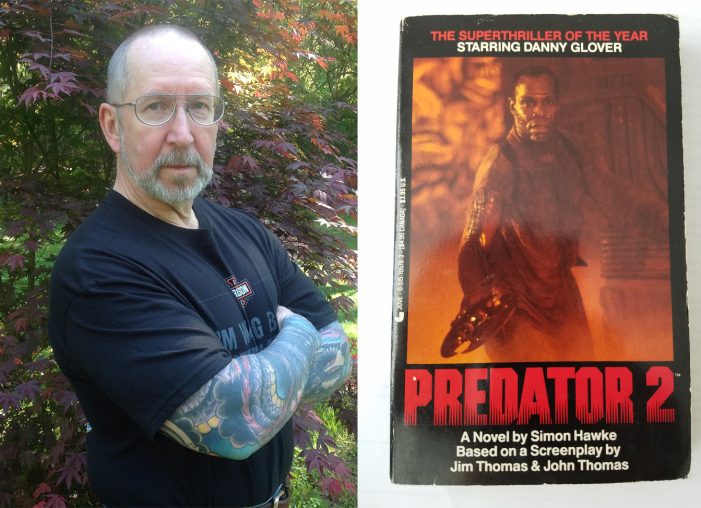 On page 172 of Simon Hawke’s Predator 2 novelization, Anna’s debrief excerpt matches word for word the lines written by Joe and John Thomas in the third draft: 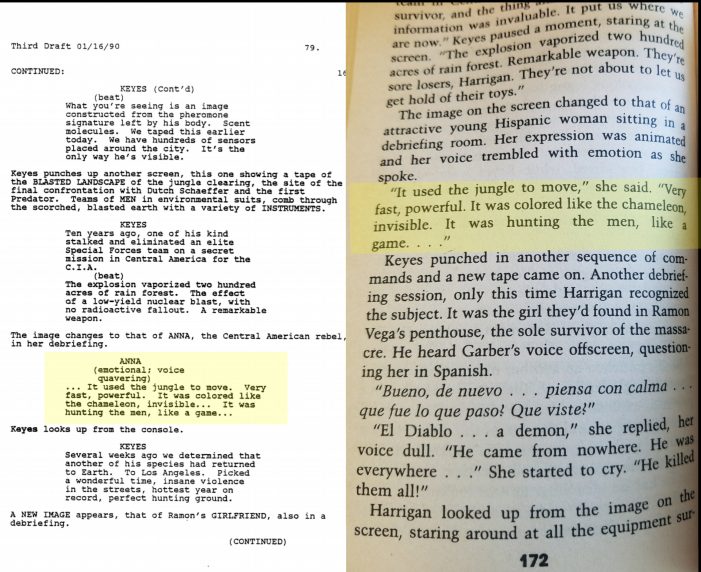 Confirming what Elpidia Carrillo most likely said during this brief filmed cameo, we also have confirmation that this footage featuring the return of Anna was replayed for Peter Keyes and Mike Harrigan to watch, made evident by this 1990 publicity still to promote the film, released by 20th Century Fox: 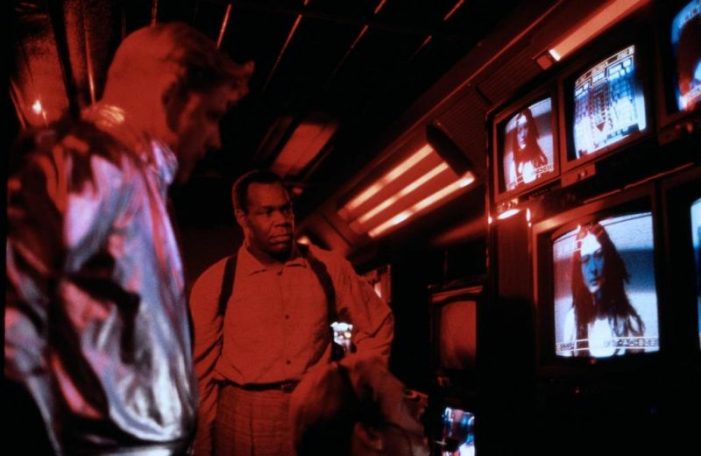 When November 21, 1990 came around however, Predator 2 was released theatrically in the United States and this full scene featuring Elpidia Carrillo was nowhere to be found. Was Anna’s debrief severely truncated to a mere blip on the screen for pacing reasons? Possibly, but the reason behind the cut still remains unknown. Interviews and commentaries from the cast and crew provide no clues.

When a two issue comic adaptation of Predator 2 was announced by Dark Horse Comics shortly after the film’s release, some fans hoped the glimpse of Anna’s appearance in theaters would be expanded upon within the comic. Yet, when the concluding issue was published in June of 1991, the comic offered no further insight. 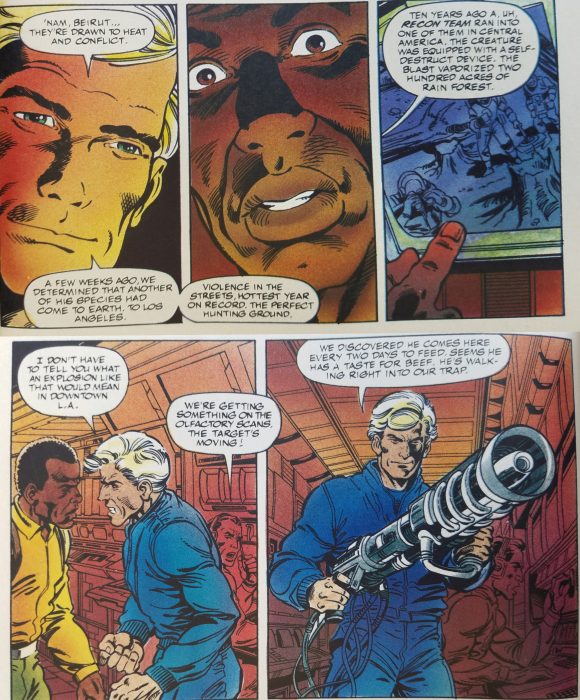 So will Anna’s full debriefing scene ever see the light of day? We don’t know. Considering the amazing amount of deleted scenes unearthed for less popular home video releases throughout the years, the fact that Anna’s interrogation remains hidden is really quite vexing. Predator fans certainly would love to see it, so let’s hope at the end of the day this and other Predator 2 deleted scenes will eventually make their way into a home video release.

And if you ever find yourself to be one of the lucky fans that cross paths with actress Elpidia Carrillo and ask her about her role in Predator, be sure to ask her about Predator 2 as well. You may just surprise her.