Discover the true meaning of fear in Alien: Isolation, a survival horror set in an atmosphere of constant dread and mortal danger. Fifteen years after the events of Alien, Ellen Ripley’s daughter, Amanda enters a desperate battle for survival, on a mission to unravel the truth behind her mother’s disappearance. As Amanda, you will navigate through an increasingly volatile world as you find yourself confronted on all sides by a panicked, desperate population and an unpredictable, ruthless Alien. Underpowered and underprepared, you must scavenge resources, improvise solutions and use your wits, not just to succeed in your mission, but to simply stay alive. 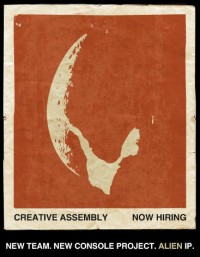 A new Aliens game was announced in May 2011 and is to be developed by Creative Assembly who are best known for their work on the Total War game series. In August 2013, there was an interview with Jurgen Post, president of Sega Europe. He mentioned Aliens Colonial Marines and the upcoming Aliens game from Creative Assembly.

SEGA isn’t giving up on the Alien franchise, despite the negative critical reaction to Colonial Marines in February. How can it bounce back from a disappointing release? “Aliens is still one of our pillars,” says Post. ” In May 2011 we announced that Creative Assembly is doing something with that brand – we’ve said nothing else so you have to read between the lines there. But it’s a great IP, and very rich. Colonial Marines, although it didn’t review well, did sell well to start. So there is an appetite for Aliens. Going forward Creative Assembly is a good quality developer and our aim is to create a good quality game… Creative Assembly’s Aliens game is being produced in-house so it’s easy to manage the production of it.”Jurgen Post

In October 2013, it was revealed that 20th Century Fox had trademarked the name “Alien: Isolation”. In December 2013, two pieces of promotional art for Alien Isolation were found on Twitter.

Footage of the original Alien Isolation pitch and of the early third person perspective was released online in March of 2015. 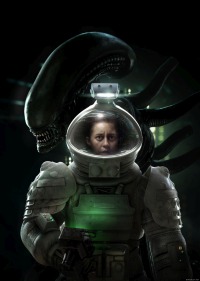 Sega officially announced Alien Isolation on January 7, 2014. It is due out for PC, PS3, PS4, X360 and X-Box One platforms by the end of 2014. It is a first-person survival horror game set fifteen years after the events in Ridley Scott’s Alien. Ellen Ripley’s daughter, Amanda, is the central character and she goes on a mission to find out what happened to her mother. Lots of preview articles and gameplay footage of Alien Isolation was released on various gaming websites. Alien: Isolation is set for release on October 7, 2014. The date was confirmed during a presentation at EGX Rezzed in March, 2014.

In April 2014, a new trailer “The Low-Fi of Alien Isolation” was released. There was also a behind-the-scenes video “The Sound of Alien Isolation“. In May 2014, another featurette was released “Creating the Cast” which focusses on the characters. In June 2014, Alien Isolation was showcased at E3 where a new trailer and new screenshots were released. A new time-based challenge game mode was also revealed as well as possible support for the Oculus Rift. In July 2014, it was revealed that Alien cast members Sigourney Weaver (Ripley), Tom Skerritt (Dallas), Veronic Cartwright (Lambert), Harry Dean Stanton (Brett), and Yaphet Kotto (Parker) will be reprising their roles in the preorder Alien Isolation DLC.

Alien Isolation received positive reviews upon its release and has a metacritic score of 80, with 27 positive reviews and 8 mixed reviews. The positive points include the tense eerie atmosphere, and the music/sound. The complaints are aimed at the lengthy campaign that features a so-so story and the hard difficulty. After its first week on sale, it debuted in second place in the UK Game Charts, just behind Fifa 15. In May 2015, it was announced that Alien Isolation had sold 2.11 million copies.

Alien Isolation will have two preorder DLC missions. The first is called “Crew Expendable” and takes place after Brett’s death. Players assume the role of Ripley, Dallas or Parker, as the crew of the Nostromo attempt to flush the alien from the air vents and into the ship’s airlock. You’ll have a slightly different perspective on events depending on which character you play as and will begin the mission with different resources. The second pre-order mission – “Last Survivor” – will be available through specific retailers and is set during the film’s finale. You will be able to play as Ripley and must activate the Nostromo’s self-destruct sequence and reach the Narcissus shuttle to escape. On October 21st, Creative Assembly announced the first of five DLC packs coming out for Alien  Isolation. The first is called ‘Corporate Lockdown‘, followed by ‘Trauma’, ‘Safe Haven’, ‘Lost Contact’ and ‘The Trigger’.

In December 2014, AvPGalaxy interviewed Lead Game Designer Gary Napper and he said “The plot for a sequel is a daily topic in the studio sometimes. People have their own ideas for where it should go, our writers have some solid concepts and yes, we do have a great opportunity to continue her story.” Asked whether or not there’d be more action in a sequel, Napper said: “I think the action oriented “Aliens” style game is very different from what Isolation is. If we made a sequel I would like to stick to the same terrifying single Alien approach but do more with the environment and interactivity within it.”

You can view more Screenshots in the gallery.

You can view more Concept Art in the gallery.

You can full the full news archive for Alien Isolation here.