One of my favorite gaming memories is from when I was pretty young, early teens I think. I was on a long flight and had along with me a PSone, the slimmed down version of the original PlayStation which released in the year 2000. Attached to the console was a portable 5″ LCD screen and battery pack. I played through the original Resident Evil, and although the screen was smaller, with headphones on, that eerie experience had me occupied for most of that flight.

Portable gaming devices have seen a bit of a resurgence as of late with the Nintendo Switch, and the upcoming Steam Deck, but there’s been one form of portable gaming that’s remained the most popular, and that’s mobile. Mobile games may have the biggest share of the gaming market, but among the gaming community, they’ve earned a negative reputation for being trivial money sinks.

There are of course exceptions to this stereotype, but it’s easy to feel that too many go for the lowest common denominator of shallow time wasters. With our favorite franchises, we’ve faired a bit better on this front. Predators & AVP: Evolution by Angry Mob games, and the lite-sequel to Isolation, Alien: Blackout by D3 Go! were all solid games for mobile that didn’t push absurd micro-transactions as is so common among the platform today.

Mobile games didn’t always have this reputation though. When smartphones were first hitting the market and with tablets becoming popular shortly after, there were a number of games for them that were genuinely solid experiences. Dead Space and Infinity Blade come to mind, but the first time I remember being truly impressed with the potential of the platform was with an iOS tech demo called Epic Citadel. This short walking simulator showcased Unreal Engine 3 running on mobile hardware, and seeing it on the first generation of iPad back in 2010 showed that console quality experiences could be possible on a mobile device.

I haven’t been impressed to that extent with anything else I’ve played on mobile devices since… until now.

So with that preface out of the way, I have an actual review to do here, right? The 2014 highly regarded Alien: Isolation has landed on mobile devices. Having spent a good amount of time with the game now on both iPad and iPhone, Alien: Isolation is the most impressive gaming experience I’ve had on the mobile platform. Yes it’s a port, but this game holds up and still has very impressive gameplay and visuals even by today’s standards.

Even more impressive is that it’s running on mobile. It’s getting hard to believe that Alien: Isolation just passed seven years old, but honestly, it’s aged like a fine-wine. It may be on a smaller screen, but with some good headphones and played in the dark, this release of the game feels just as terrifying.

This is exactly the same incredible Alien: Isolation from before. A harrowing journey of survival and terror with us playing as Amanda Ripley, trying to uncover just what happened to her mother before finding herself against a Xenomorph as well. With what was supposed to be a routine retrieval of the Nostromo’s recovered flight recorder unit, It quickly becomes clear that all is not well on the Seegson company’s deep space station known as Sevastopol, and Amanda will have to unravel the mystery behind what happened here as well.

This is pure Survival Horror, with limited resources and intense atmosphere. The Alien stalking you utilizes an unpredictable AI system built into the game. You’ll have to adapt quickly when it decides to show up, and take care to not attract it by making too much noise. After you as well will be ‘Working Joe’ androids, Seegson’s creepy & more rudimentary models that are unusually hostile. Desperate human survivors are also about, some who won’t take any chances and will shoot you on sight.

We loved it when it came out in 2014, so if you’d like to read more about the game itself, check out our review from its original release. 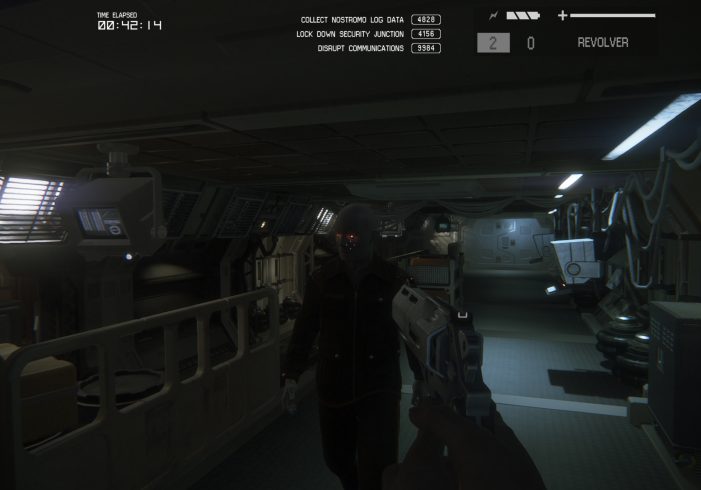 I was honestly quite surprised when I heard the news that Alien: Isolation was getting another re-release. That it was coming to mobile was even more surprising. Creative Assembly delivered one of the best survival-horror games of all time, and now Feral Interactive has made the title available to play in its entirety anytime, anywhere. Feral Interactive may sound familiar, as they brought us the fantastic Nintendo Switch port of the game a couple years back.

When graphic analysis channel Digital Foundry examined that Switch re-release, they were impressed that in some aspects the game actually looked better than it did on PS4 and Xbox One hardware. That’s the impression I’m getting from the game on mobile. There are three graphics options in the menu: Performance, which prioritizes frame rate; Graphics which favors detail; and Battery Saver which as the name suggests reduces device battery consumption.

On both iPad Pro and iPhone 11 Pro Max, the Graphics setting still seemed to maintain a solid frame rate, with the Performance setting boosting that frame rate even higher. Feral Interactive said during their Reddit AMA that the game targets 30fps on its default setting, though I’m not sure if that’s locked, as it seemed to be higher than 30 from my impression on the Graphics setting. Here’s hoping Digital Foundry also takes a dive on this release but to my eyes, this looks right in line with the base console versions, and with a higher frame rate option to boot.

The 19.5:9 aspect ratio for the iPhone brings the game into a wider view than the previous typical 16:9 presentation. Whereas the iPad ratio feels more like a photograph. With the resolutions at 2688 x 1242 and 1668 x 2388 for my phone and tablet respectively, the visuals certainly look sharp, with less aliasing than I remember from my time with the game on PS4. 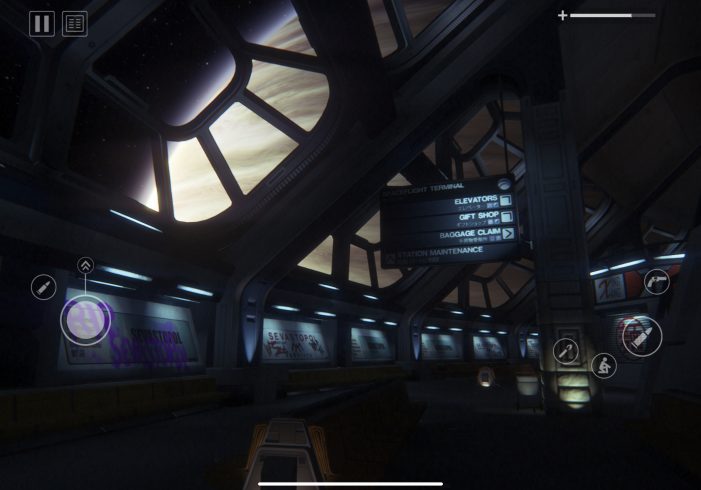 The touch controls work quite well. The icons on screen are light and grey, not intrusive to the experience, and they can be fully customized with multiple control profiles. By default, the icons do take up more real estate on a phone screen than when using a tablet, but the icons’ size and opacity can also be changed. If your device has haptic feedback capability, these responses are integrated into the game and provide a response to touch icon presses.

Also supported are Bluetooth enabled gamepads such as the DualSense, DualShock 4, and Xbox controllers. All the button input UI elements are changed accordingly when a controller is connected, the touch icons disappear, and it plays just as you would expect it to on a console. There was one control input that I couldn’t find for the touch scheme, and that was how to change focus, where your depth of field shifts between the motion tracker and the area ahead. this worked just fine while using a controller though.

Though I didn’t have a chance to test it out, the game also features iPadOS-compatible keyboard and mouse support. Between playing on a tablet and phone, I think the ideal experience for this release is to play on a tablet with a controller. Though with cloud saves, I was able to easily pick back up on my phone where I left off on my tablet. Something to keep in mind is that there are specific iOS and Android devices that support this game, which Feral has posted a guide for. The more recent your device is, the better the game is likely to look and run. The game does not currently support iOS Game Center achievements so hopefully this is something that can be added. 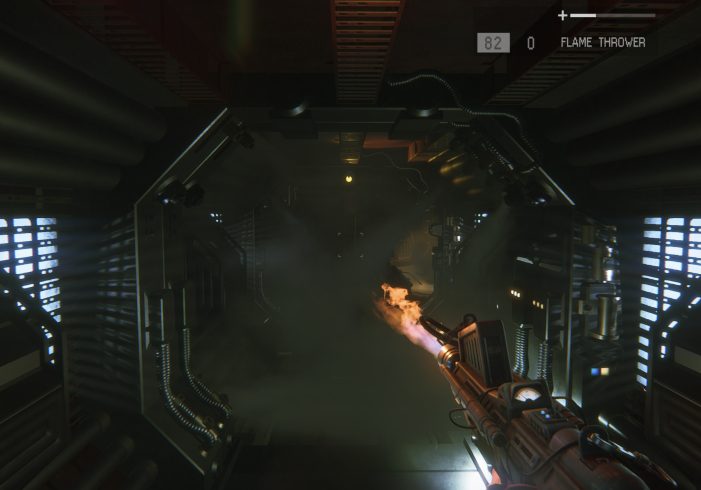 The main game is ideal for sitting down with for a while, but the Survivor mode lends itself nicely to shorter play sessions. I never managed to finish them all before, as some of them were quite tough, even after completing the main game on Nightmare difficulty. Racing for the best time while completing all side objectives can be a 10 to 20 minute affair, with the exception of the longer gauntlet type levels.

Also more ideal for on the go are the two excellent DLC campaigns, Crew Expendable & Last Survivor, which recreate scenarios from the original film, featuring the original voice cast returning to reprise their roles. These mini campaigns have difficulty select, so the option of being not nearly as punishing as Survivor mode is there.

This is another incredible port from Feral Interactive. Putting the entire game on mobile and having it look and play as well as it does is a significant achievement. Alien: Isolation represents what mobile gaming could be if it tried. This is the full and uncompromised AAA experience of what’s widely considered to be the best Alien game, with all the DLC included for $14.99 / €14.99 / £12.99, on your phone or tablet. That’s insane. If you somehow have yet to play this, find yourself on a long flight looking for quality entertainment to escape into, or are wanting to revisit Sevastopol Station from the comfort of your bedroom on a dark & stormy night, Alien: Isolation for mobile gets the highest recommendation.

From RidgeTop for AvPGalaxy, I give Alien: Isolation on mobile 10/10

Now all we need is a full on remaster with VR support.