On the night before my fifth birthday my father let me watch some of Aliens. I couldn’t make it past the first 50 or so minutes. I had to turn it off after that first encounter in the hive but it started a life-long obsession with the franchise for one simple fact – it terrified me beyond belief. I had nightmares for five years. I slept face down – my young logic being that any chest-bursters couldn’t come out and it wasn’t until my father forced me to watch the film in its entirety that I stopped having nightmares and became fascinated instead.

I have fond memories of watching my father play Alien Trilogy on the Sega Saturn when I was younger. I wouldn’t dare pick up the game box myself as the image of the Alien scared me. I watched my father play it through my hands or from the side of the sofa. 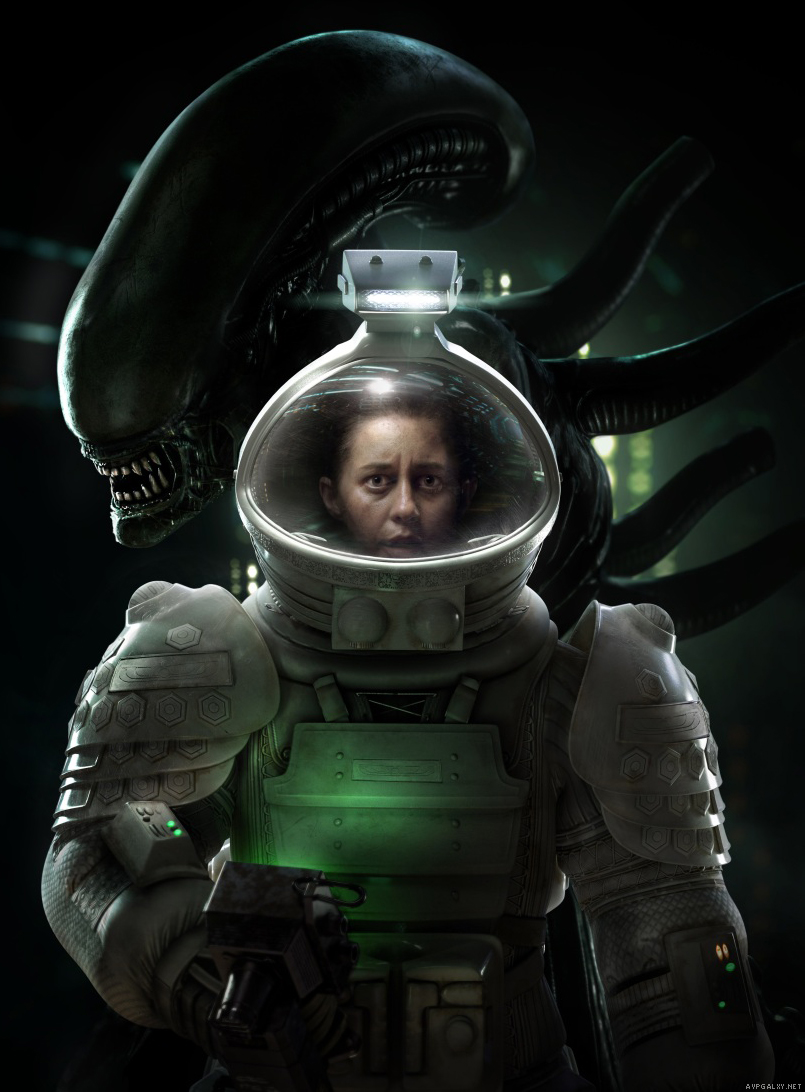 When I finally developed the nerves to play an Alien game myself, I was ten and I was playing Rebellion’s Aliens vs. Predator (2000). I can vividly remember not being able to bring myself to leave the APC at the start of the third level of the Marine campaign.

I haven’t felt like that for over a decade. Rebellion’s most recent Aliens vs. Predator first few levels were atmospheric and tense but it wasn’t quite terrifying. The closest Aliens: Colonial Marines came was during the scenes in the sewer and that lost its edge on any subsequent playthroughs.

So when I say that I had to actually take time to compose myself after I played Alien Isolation for the first time, I want you to understand just how much it affected me.

Fellow AvPGalaxy staff member, Dachande, and I were invited to Creative Assembly Studios in Horsham, England to get a hands-on with the game and have a tour around the studio. We were put in a dark room, directly in front of two massive monitors and asked to fend for ourselves.

We played through the same segment that the press have played through and that we’ve all seen footage of but there’s a difference between watching those videos and experiencing this game for yourself. I stumbled through the abandoned Sevastapol space station, gathering various items that had I been playing the complete game would have formed a part of the crafting system. Whilst we don’t know much about the system at the minute, what we do know is that it will be possible to use this system to create various items to act as distractions.

One of the doors is locked and I’m unable to proceed. I manage to grab a welding tool and start to weld open the emergency release on the one of the doors. Much like in previous Alien (vs. Predator) games, in order to use the welder I merely had to click the button and off it went. The station is dark and creeky. Thankfully I’ve got a torch which I can use (and narrow the beam) to help light the way to my objective – to restore power to the station – but it’s not something I want to be using when the Alien shows up.

Thankfully I find the console I need but I’ve got to hack it. Amanda pulls out the hacking device. I’m not going to lie here, I wasn’t too sure what to do straight off the bat. You use one of the thumb sticks to dial to a frequency that the computer is emitting. It then presents you with an image and you have to pick three of the images it present you to match the image on the screen in order to proceed with the hack. Dachande picked it up straight away but I was looking to fit in the gaps in the image. 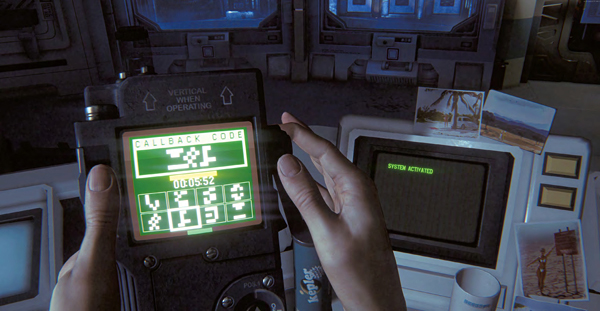 Once I succeeded, the power kicks on and then it comes. The moment when the Alien came slinking down from the vents had me mesmerised and I could only watch as the tail dropped to the floor between my legs and the Alien slinked off into the darkness.

For those who were wondering if Amanda Ripley had a speaking part in the game, this cutscene has Amanda whispering “it’s here” into her headset. Her breathing and pounding heartbeat accompany me through the demo, my heart rate mirroring hers.

We’ve all heard about the dynamic AI of the Alien and to see it in action was a terrifying experience. I had foreknowledge of how smart the creature was and I decided to try and outsmart it. I watched the way the Alien went and decided I wanted to keep as far away from it as possible. Checking my map, I saw I could get to my objective in the opposite direction the Alien went. It would be a little longer but it’d be worth it to avoid the goliath extra-terrestrial. The map itself had that low-fi sci-fi feeling that Creative Assembly are very proud to talk about.

I barely made it far before I caused too much noise (try not to run!) and I heard the thudding of a massive creature running towards me. I barely had time to turn around and witness the first of several deaths on my playthrough of Alien Isolation. I watched myself fall the floor, my feet knocked out from underneath me as I was dragged to face the Alien. On one occasion I didn’t even get the chance to turn around and face my would-be extra-terrestrial killer, only hear him steamroll towards me from behind.

Each time I restarted it was like playing a completely different section. I had the freedom to react differently every time. I could try numerous paths and methods of getting to my objective and the Alien would react just as freely as I would. The dynamic nature of the game was impressive. Despite the small area we were actually playing in the game felt open and non-linear. 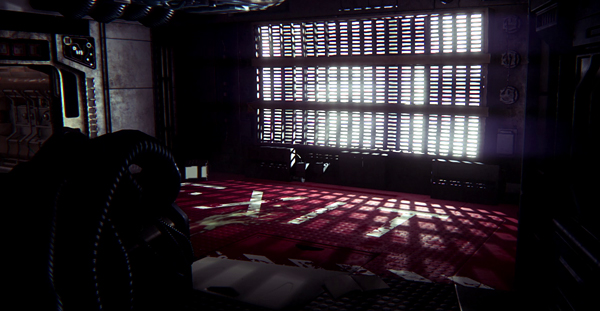 The dread I felt whenever that blip appeared on my motion tracker is hard to describe. I’m sure a readout of my pulse and heart rate would be a better way of communicating the physical reaction I had when I was crouched behind a small pile of equipment.

It was also possible to hide inside of cabinets and avoid the Alien in there. Whilst I didn’t make my way into the rooms with the cabinets, Dachande did. You had the option of leaning forward to check if the Alien was nearby, or lean back and hold your breath – making sure you made no noise so that the Alien went away.

From my favourite spots behind the piles of equipment, I was given the option to lean over and have a look with a simple press of a button but I did not dare to peak up and see what that hulking creature was doing. My heart jumped every time it looked in my direction and the tension rose when it’s slow, deliberate movements took it towards me.