Prey 2, or Predator 6, is the name of the next potential film in the Predator series and possible sequel to Dan Trachtenberg’s Prey that showed a young female Comanche warrior called Naru fight a Predator in 1719.

Prey 2 is in the rumoured phase and there hasn’t been any confirmation about what further Predator sequels might involve. No Predator sequel has ever continued with the story or characters of the previous film. However, because Prey has been well-received by fans and film critics, it’s possible the studio might do a direct continuation of Naru’s story in a new film set in the same time period of the early 1700’s set in the Great Plains. 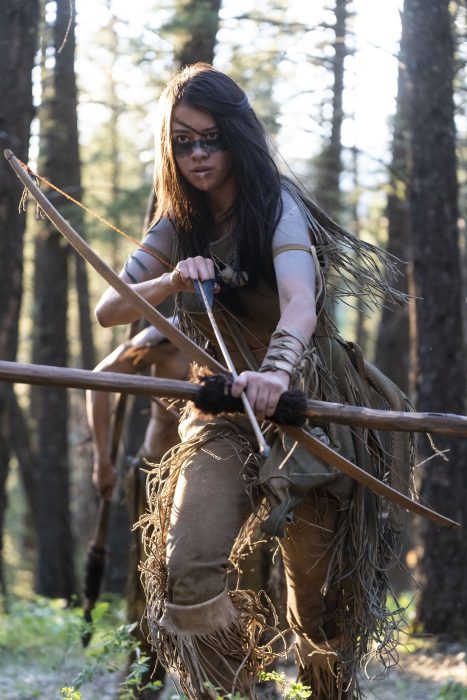 If the studio does make a direct sequel to Prey, it seems certain that Amber Midthunder would reprise her role as the Comanche warrior Naru. Coco, the Carolina dog who plays Naru’s faithful companion Sarii, may return too. Potentially, Dan DiLiegro might return to play a new Predator.

Assuming that the next Predator film is not a direct sequel to Prey and is set in modern times, Arnold Schwarzenegger has long been rumoured to reprise his role a Dutch in a Predator sequel. When a new Predator film is announced, there is always some rumblings that Dutch might make an appearance. For Predators, Robert Rodriguez made it clear from the outset that he wanted Arnie to make an appearance but he was still busy.

In March 2016, Arnold Schwarzenegger had lunch with director Shane Black to discuss The Predator. In an early draft for The Predator, Arnold’s character Dutch appeared in the closing moments of the film. He emerges from a chopper and asks Quinn, Casey and Rory to come with him. Schwarzenegger was very unhappy with the script and refused to take part, saying he’d only do it if “there’s a chance that they rewrite it, or make it a more significant role.”

Other people who have been in the spotlight was WWF wrestler The Rock who would have taken over the Dutch role. In September 2003, The Rock denied that he has any involvement in a Predator movie. In 2005, another wrestler, John Cena, was also rumoured to be involved in a remake of Predator.

In the closing moments of the animated credits of Prey, Naru and Sarii are looking up to the skies when three Predator ships come into view. There is still more story to be told around Raphael Adolini’s Flintlock pistol. At some point, the Flintlock pistol is taken from Naru’s Comanche tribe and eventually ends up in the hands of the Predator Greyback. As we saw in Predator 2, City Hunter begins hunting Colombian and Jamaican gang members in Los Angeles in 1997. Eventually, Lieutenant Mike Harrigan tracks City Hunter down to his mothership and kills him. Predator Greyback gives Harrigan the Flintlock pistol as a reward.

Before The Predator was announced, the most popular idea was Rodriguez returning to do a direct sequel to Predators with Adrien Brody again. The ending was very open-ended but I’d imagine it would be hard to do a new story without repeating the first movie. Rodriguez stated in July 2010 that he had a few ideas for Predator 4. He said Predators sets up a new story, new location and a new world for a potential sequel. If Rodriguez isn’t involved, it could be a completely new story.

You can check out this article: Where should Shane Black’s Predator Sequel take place? which covers various locations they could go with Predator 6 including the Predator homeworld, Vietnam and World War 2.

You can full the full news archive for Prey here.