Prey is the name of the next prospective sequel after Shane Black’s 2018 The Predator. On this page, you can find news and rumours of the Predator sequel. Its shooting name was Skulls. It was announced in November 2021, that it’s new title is Prey. It will be released on the streaming platform Hulu in Summer 2022.

Set in the world of the Comanche Nation 300 years ago, following Naru, a skilled female warrior who fiercely protects her tribe against a highly evolved alien predator.

Dan Trachtenberg is directing the sequel!

Prey is scheduled to be released on the streaming platform Hulu in North America in Summer 2022 while it will appear on Star in international territories. It’s currently unknown if Prey will get a theatrical release.

Prior to The Predator being released, producer John Davis said had aspirations to keep the Predator series going with at least two more sequels.

The producer says that “The Predator” will set up two sequels that he hopes Black will return to direct. But Black doesn’t want to get ahead of himself.

“I would love to say we’ve been planning a trilogy, but I take one day at a time,” he cautions. “In motion-picture terms that’s one movie at a time.”

Dan Trachtenberg, along with another writer, approached John Davis while they were filming 2018’s The Predator with an idea for a new Predator film. They couldn’t start production on a new film until they’d finished the previous one so there was a lot of secrecy. On November 20, 2020, it was announced that Dan Trachtenberg, probably best known for directing 10 Cloverfield Lane in addition to episodes of Black Mirror and The Boys, will be directing a Predator 5 written by Patrick Aison.

The special effects in Skulls was handled once again by StudioADI who worked on numerous Alien and Predator films.

Casting for Prey has been shrouded in secrecy and very little has been released so far. We do know Amber Midthunder will be playing the lead role of Kee/Naru. She’s best known for her roles in the television series Legion and Roswell.  Stefany Mathias, we believe, will be playing the role of Aruka, the mother of Kee/Naru and Taabe. Dakota Beavers and Dane Diliegro also have roles. 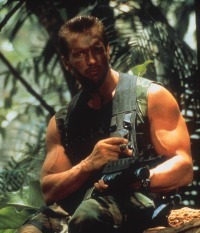 Will Arnold Schwarzenegger Return to Predator?

Arnold Schwarzenegger has been rumoured to appear in every Predator or Alien vs Predator film since the original but for one reason or another, it never transpired. In an early draft for The Predator, Arnold’s character Dutch appeared in the closing moments of the film. He emerges from a chopper and asks Quinn, Casey and Rory to come with him. Schwarzenegger was very unhappy with the script and refused to take part, saying he’d only do it if “there’s a chance that they rewrite it, or make it a more significant role.” Given how Prey is set a few hundred years ago, I would say it’s extremely unlikely Dutch will make any appearance.

27-Jul-21: Producer John Davis said Skulls is more similar to The Revenant than any other Predator film.

12-Nov-21: The film takes place 300 years ago with the Comanche Nation, following Naru, a skilled female warrior who protects her tribe against a Predator. Naru was known as Kee in the previous Prey leaks.

Potential Stories Prior To Skulls

Before The Predator was announced, the most popular idea was Rodriguez returning to do a direct sequel to Predators with Adrien Brody again. Rodriguez stated in July 2010 that he had a few ideas for Predator 4. He said Predators sets up a new story, new location and a new world for a potential sequel. If Rodriguez isn’t involved, it could be a completely new story.

“[The studio] said, ‘Let’s do some other ones. What other story ideas do you have?’” says the filmmaker. “Because it was like, let’s test out the market with this one. They really wanted it to be pretty contained, pretty scaled-back. They didn’t want to put too many of the ideas into it that we could save for a second one. So we could see what the appetite was, because the bigger movie would actually be what comes following that. That kind of sets up a new storyline, new location and world, and then you can really go crazy from there.”Robert Rodriguez

I wrote an interesting article about where a Predator sequel could take place and includes locations such as World War 2, a Galleon ship or the Predator homeworld.

Filming on Prey was supposed to begin filming in May 2021 but was delayed. It began filming on the 7th of June in Calgary, Canada. Filming ended on Prey on September 11, 2021.

Producer John Davis said, in July 2021, the film was visualised as a R-Rated picture but it could easily be PG-13 once its cut together.