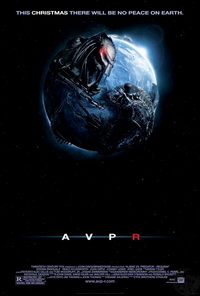 The movie takes place straight after the first AvP when the Predalien causes a scout ship to crash onto a small town in Colorado called Gunnison. The hybrid escapes along with many Facehuggers and the whole town is overrun. A lone Predator is sent from the Predator homeworld to destroy the aliens and the hybrid. Meanwhile, a group of townspeople must work together to survive.

The Strause Brothers worked on the X-Files movie in 1995 and then founded their own visual effects company Hydraulx. Hydraulx has worked on many blockbusters and they directed many advertisements and music videos. The Strause Brothers originally pitched an idea for the first Alien vs Predator film. When AvP2 came up, they thought they’d be perfect for the role as it had a limited budget and their background in visual effects would help them land the job. They were hired do do a direct sequel to Alien vs Predator in Spring 2006 and they had a short amount of time before production began.

Writer Shane Salerno wrote an early pitch for the film where the Predator ship crashed in Afghanistan and the movie revolved around a special forces team. Fox had already decided to go down the small town route by the time the Strauses came aboard. Many scenes were changed from the early drafts and some scenes were cut down for budget reasons. Comic-book artists were hired to help the Strauses with their storyboards. They also did CGI pre-vis for the big sequences and pre-edited a huge portion of the film before they started filming. Due to budget reasons, ADI could only redesign the heads of the aliens so body molds from AvP and Alien Resurrection were used as well.

Reiko Aylesworth (24) was cast in the lead role as Kelly O’Brien. She reportedly hired the best personal trainer in Vancouver to prepare for her role. She worked out a few times a day and was on a strict diet so she would appear fit for the role. As she fired various weapons in the film, she trained a gun range with a weapon instructor. Ariel Gade (Invasion) was cast as her daughter Molly while Sam Trammell plays her husband, Tim. Johnny Lewis plays Ricky while Steven Pasquale (Rescue Me) plays his brother Dallas. John Ortiz, Gina Holden, Kristen Hager and David Paetkau also had roles.

It was revealed that they wanted to have a few cameo appearances in AvP Requiem. They had hoped to get Adam Baldwin (Garber from Predator 2) to reprise his role but he declined so they used Robert Joy as a new character. The filmmakers also wanted Billy Paxton (Hudson from Aliens & Lambert from Predator 2) to play a chef but he wanted too much money. Michael Biehn (Hicks from Aliens) was going to play one of the special forces people at the end of the movie but the studio objected.

Filming began on September 25, 2006 in Vancouver, Canada which had a 52 day schedule. In between shooting, the brothers still did visual effects work on 300, Shooter and Fantastic Four: Rise of the Silver Surfer.

According to Colin Strause, it’s estimated that 460 out of the 500 visual effects shots were created by his own company Hydraulx. The nuclear explosion at the end of the film was created using Maya fluids and BA Volume Shader. Inside of the Predator ship was created using CGI instead of building sets as it was more cost-effective. At its highest, there were 110 people working on the visual effects for several months but averaged 70 people which was almost all of Hyraulx’s staff. Because of their background in visual effects, they tried to film as much as they could on film without having to resort to visual effects.

Apart from the exterior spaceship shots, there isn’t any pure CG shots. CGI was used for the aliens’ tails and inner jaws while on the previous film, it required puppeteers to control them. The main visual effects included the set design, the final nuclear explosion, the predator ship crash landing and the predator cloak. During post-production, 20th Century Fox approved new scenes to be shot in February 2007. These included scenes of the Wolf Predator on the predator homeworld and when the aliens attack the national guard.

Brian Tyler, who went on to work on Iron Man 3, Thor: The Dark World, was hired to do the score for AvP Requiem. It’s a mixture of the two themes with predator theme using bongos and basses and the alien theme using violins, violas and flutes. The Strauses wanted to take a different direction from Harold Kloser’s score for the first Alien vs Predator film and they wanted Brian Tyler to reference the scores from the original films like the violas and percussion from Aliens and the tribal percussion from Predator and Predator 2. Tyler also referenced the Alien Resurrection score with the tracks National Guard and Taking Sides.

The Strauses and the studio made it clear from the outset that they were making the movie with a Hard R rating which was a contrast to the original AvP‘s PG13 rating. The MPAA officially gave AvP Requiem a R Rating for “violence, gore and language” in September 2007. In the UK, the BBFC gave the movie a 15 certificate like the original AvP. The R-Rated trailer was to be shown on July 27, 2007 at the San Diego ComicCon, but was withdrawn after convention officials prohibited the screening of any R-rated footage. The R-Rated trailer was released online August 25, 2007 and the greenband trailer was released online on October 3, 2007.

Aliens vs Predator Requiem was released in North American on December 25, 2007 in 2563 cinemas. The film grossed $9,515,615 in its opening day and entered at number 10 at the box office. It grossed $5 million in Australia, $9 million in Japan and the UK and $7 million in Russia. Its domestic gross was $41,797,066 with its overseas gross at $87,087,428 giving it a worlwide gross of $128,884,494. It’s the lowest grossing Alien film domestically and the second lowest worldwide next to Ridley Scott’s Alien. It’s the lowest grossing movie out of all Alien and Predator films if you account for inflation.

Like Alien vs Predator, the film was not screened for critics prior to its release and when they did see it, reception was extremely negative. It has a 12% Rotten rating on RottenTomatoes based on 69 reviews which is the lowest rating out of all the movies in the franchises. The main criticisms included the story, acting, dialogue, characters, bad lighting, the extreme gore and poor editing. Fan reaction was just as negative. Some of the more positive points were aimed at Brian Tyler’s score and the Wolf Predator design which many though was a huge improvement over the predator designs in AvP.

AvP Requiem was released on DVD and Blu-Ray on April 15, 2008 in North America and May 12, 2008 in in the UK. There were three different versions in the U.S.: a single-disc R-Rated version, a single-disc Unrated version, and a two-disc Unrated set. The Unrated cut was 101 minutes long compared to the 94 minute theatrical version. Extra scenes mainly consisted of more dialogue or more gore. You can view the AvP Requiem Unrated vs Theatrical article for more information.

The bonus features on the disc included two commentaries, the first with the Strause Brothers and producer John Davis and the second with creature designers Alec Gillis and Tom Woodruff. There were also various making of documentaries and featurettes as well as still galleries. The Blu-Ray version has an exclusive Weyland-Yutani archives which is a reference guide to all the films in the franchises. In its debut week, it came in at number one in the Blu-Ray chart and number two in the DVD chart. It generated $27,403,705 in DVD sales in the U.S. alone.

There was a tie-in video game called AvP Requiem for Sony PSP released on November 12, 2007 in North American and November 30, 2007 in Europe. It was developed by Rebellion and published by Sierra and it was a third-person action game allowing you to control the predator from the film. It received negative reviews from various media websites. Special effects company ADI released a making of book entitled AvP Requiem: Inside the Monster Shop in December 2007 which included various behind-the-scenes shots from production. Inkworks released a trading card set in December 2007.

You can find more images on AvP Requiem Production Stills.

You can find more images on AvP Requiem Concept Art.