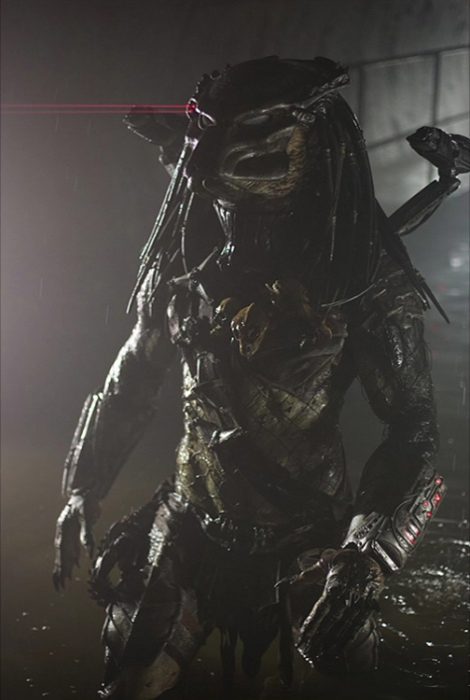 Wolf Predator in the Sewer

The Wolf Predator is the central Predator in the 2007 movie AvP Requiem. He arrives in Gunnison, Colorado to clean up the xenomorph outbreak caused by a Predalien. Wolf was played by Ian Whyte.

The Wolf Predator was first alerted to a distress signal from another Predator spaceship when he was on a Predator homeworld. He grabs his weapons and equipment and flies to Earth and lands in Gunnison, Colorado. He finds the crashed Predator scout ship and realises that a Predalien and many Facehuggers survived the crash and escaped into the town. Wolf activates a self-destruct device, destroying the ship and sets out in search for the xenomorphs.

In the forest, Wolf is dissolving the bodies of Buddy and Sam Benson as well as the dead Facehuggers beside them, when Deputy Ray catches him in the act. As the police officer tried to run away, Wolf killed him, skinned his body and hung it up in a tree. He tracks the Facehuggers to the sewer where Wolf sets laser traps for the xenomorphs. Two aliens were killed in the battle before the Predalien appears and hits Wolf with its tail causing Wolf to misfire his shoulder cannon.

The Predalien and other aliens escape through the newly-opened hole up to street level. Wolf uses his power glove to get to the surface but gets there too late and the aliens have escaped. He tracks the xenomorphs to the power plant and attempts to kill one of them with his shoulder cannon. The electro-magnetic interference from the power plant causes his targeting system to malfunction and he hits the power planet generations by mistake causing a blackout in the whole town. The xenomorph escapes and Wolf tracks another one to the local swimming pool where he stabs it through the head with his spear.

Wolf in the Swimming Pool

The Wolf Predator heals his wounds at the cemetery before tracking Kelly and Molly O’Brien to a sporting goods store. He incapacitated Dallas and hung him upside down to bait the xenomorphs. Wolf kills two of the humans in the store and a battle ensues between him and the xenomorphs. All five aliens were killed by Wolf but one of his shoulder cannons was damaged in the process. He then converts his two shoulder cannons into a more powerful handheld weapon. The Predator then tracks the xenomorphs to the hospital where he discovers they have made a hive.

Wolf gets attacked from behind by the Predalien but managed to injure it with his wristblades. The Predalien sends in three xenomorphs to battle it but Wolf easily killed them. The Predator then kills another two with shurikens but accidently kills Jesse with one. Wolf is then pushed down an elevator shaft by another xenomorph, losing his handheld shoulder cannon in the process. He kills the xenomorph and makes his way to the roof of the hospital. He kills another xenomorph who was about to kill Dallas.

While the humans escape, Wolf fights the Predalien on the rooftop but his wrist gauntlet gets damaged. He removes the rest of his equipment and mask and battles with the Predalien. They interlock and Wolf tears out the Predalien’s inner jaw while the Predalien fatally injures the Wolf Predator by impaling him with its tail. At that point, a fighter jet drops a nuclear bomb on the town killing him, the xenomorphs and other nearby humans in the blast.

Wolf is a very experienced hunter having been in many battles with many different species. He was easily able to overpower the xenomorphs and could take on a Predalien in the film. When we saw him on the Predator homeworld, he had many trophies from many different creatures, as well as many different masks and weapons. Many of the weapons and equipment are new, never seen in previous Predator films. Also on his mask, we can see that it contains many hieroglyphics resulting from the number of hunts he has been on. As a result of the ferocious battles he has been involved in, he has a missing mandible in his upper-left jaw as well as an acid-scarred face from a previous battle with a xenomorph. He also appears to be blind or have poor vision in his left eye from the acid. 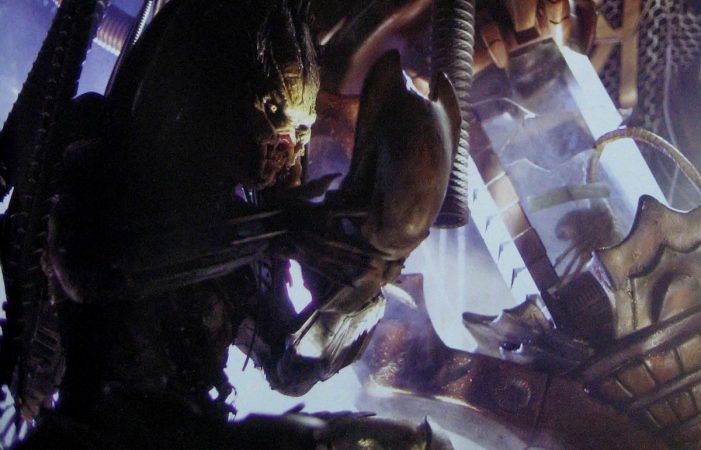 Wolf Predator in the Crashed Ship

Wolf has all of the standard weapons and equipment: a cloak, self-destruct device, wristblades and a spear. Shurikens make a return from AvP. A new weapon is the whip which is seen able to tear apart a xenomorph. The power glove is a new feature which enables the Predator to punch through solid objects. When he was in the sewer, he used the power glove to get back to the surface. Laser mines Is another new weapon that Wolf uses in the sewer to trap xenomorphs.

They’re able to slice straight through them when the xenomorphs come into contact with them. Wolf also possesses some kind of dissolving liquid that he uses to remove all traces of the xenomorphs. The Predator has various vision modes including ones to track xenomorphs. The thermal blue vision mode makes a return from the original films as opposed to the orange version seen in AvP. Lastly, the shoulder cannon makes a return but Wolf is shown to have dual shoulder cannons after he takes one from a dead Predator. Later in the film, he is able to transform them into a more powerful hand-held weapon that requires it to charge up before it can be fired. 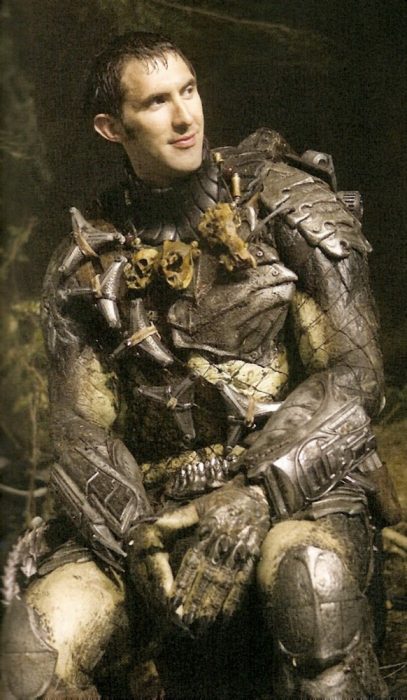 The Wolf Predator was nicknamed Wolf by the directors as a homage to the character in Pulp Fiction as he was the ‘cleaner’. The Predator was once again played by Ian Whyte (who played Scar in AvP and the Engineer in Prometheus). Like in AvP, the special effects were handled by Amalgamated Dynamics who redesigned the Predator to be more athletic and less bulky than the ones we saw in AvP. ADI built two suits for the movie – a hero suit and a stunt suit which included all the armour sections that could easily be removed at will. ADI said the Predator is a multi-layered creature – his skin, his armour, his weapons so it’s more complex to design the creature.

Wolf’s face was also redesigned – it had a flatter face with a bigger mouth and mandible and some extra upper teeth. His face was also missing a mandible and he had been made to look acid-burnt to show he had previously battled xenomorphs. The missing mandible was inspired by Broken Tusk who was a Predator in the original AvP comic book story. The directors wanted to pay homage to the comic books so they added in the melted-off mandible.  The Wolf Predator’s eyes were animatronic this time around as opposed to contact lenses to give it a less human-like appearance.

His mask was inspired by City Hunter’s in Predator 2 but with a grey colour scheme and thorny protrusion at the top. Various hieroglyphics were etched into the mask, presumably to show the Predator had been on many hunts and had collected many trophies. New weapons and equipment included the power glove which was integrated into the Predator’s gauntlet allowing him to punch through objects. The whip wasn’t originally in the script. ADI showed the directors designs for it in their first meeting and the Strause Brothers had it featured in their movie.