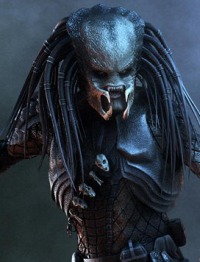 The Scar Predator is one of the Predators that appears in the 2004 film Alien vs Predator directed by Paul W.S. Anderson. Unlike the previous films, the Predator was designed by Amalgamated Dynamics and portrayed by Ian Whyte. The Predator comes to Bouvetøya Island in Antarctica with two other Predators as part of an ancient training ritual. They were supposed to hunt xenomorphs in an underground pyramid. He is eventually killed by the Queen Alien.

As the Celtic Predator seems to rely more on his size and strength, Scar was the smarter fighter using his senses to help him. He also appeared to be the most honourable Predator out of three as he didn’t kill Weyland at first.

The Scar Predator came to Earth with fellow Predators Celtic and Chopper to face a rite of passage in an underground pyramid on Bouvetøya Island, Antarctica. The Predator mothership was able to drill a hole to the pyramid using some form heat-based laser which attracted the attention of Charles Bishop Weyland who organised an expedition to go down there. Inside the pyramid was a Queen Alien which the Predators used for breeding xenomorphs to hunt and three shoulder cannons were hidden within the pyramid. It’s revealed that adolescent Predators use the pyramid every 100 years as a coming of age hunt to prove themselves to the Elder Predators. The mothership drops the Predators off in separate pods and they kill the mercenaries on the surface. They reach the pyramid and find that the humans have stolen their shoulder cannons. Scar follows Alexa Woods and Sebastian De Rosa after his fellow Predators were killed by a xenomorph. Scar confronts Weyland but decided to spare him when he realised he was already dying. Weyland attacked Scar so the Predator killed him with his wristblades. Scar kills a xenomorph and a facehugger and removes his mask to mark it with the blood of the xenomorph he just killed. As he’s doing it, he’s attacked by a facehugger.

He catches up with Lex and is about to kill her when she gives him his shoulder cannon back. Multiple xenomorphs attack them and Scar kills several of them while Lex kills one with Scar’s combi-stick. Scar decides to team up with Lex and he crafts some weapons and armour for her using a  dead xenomorph’s skull and tail. They come across a facehugger nest and discover Sebastian in resin. She kills him and the chestburster emerges but the Predator easily kills it. He activates his self-destruct device and throws it into the nest. They both escape the pyramid as the bomb detonates. When they reach the surface, Scar marks Lex with the blood of a xenomorph and the Queen Alien surfaces. They both fight the Queen and eventually Scar is fatally injured by her tail. Lex manages to push the water tank into the frozen water which drags the Queen down into the ocean with it. Lex looks over the dying Scar Predator when the Elder Predator and other Predator materialise. He gives Lex his combi-stick as a sign of respect and the Predators leave in their ship taking Scar’s body with them. As they leave the body, a Predalien Chestburster emerges from his corpse.

The Predators were designed by Amalgamated Dynamic in Alien vs Predator as opposed to Stan Winston and they changed considerably. They were much bulkier in appearance with armour covering more of their body. Originally, designer Steve Johnson conceptualised completely new Predator designs but Anderson felt the designs were too far removed different from what came before it. He wanted the Predators to be different from the original films so they were made more muscular and menacing and borrowed from the original comics. Wider shoulders, a smaller waist and the dreadlocks were made longer. The Predator gained a new weapon in Alien vs Predator – a shuriken as opposed to the smart disc seen in Predator 2. The shoulder cannons and wristblades were made much bigger than previously seen and their thermal heat vision was changed from blue to orange as Anderson thought it looked cooler. Scar Predator was portrayed by 7”1’ actor Ian Whyte who went onto play Wolf Predator in AvP Requiem and the Engineer in Prometheus.