The section covers various AvP Movie deleted scenes that were seen on the DVD. Part 2 of the article is about production stills, trailers etc which contained missing scenes that were not seen in Alien vs Predator.

Scenes listed here were found on the DVD.

Antarctica 1904 (Source: R1 DVD, R1 Unrated DVD, R2 Extreme DVD)
This was the new scene that was in the extended version of AvP. It shows the whaling station in 1904, and a whaler is being chased. He finds a building to hide in but a Predator de-cloaks in front of him. As the camera cuts to the Predator’s vision, there’s another creature in the room. It switches to alien vision and the alien leaps towards him. The movie then cuts to the opening titles and proceeds from there like the theatrical version.

The Pizza Man (Source: R2 Extreme DVD)
There’s an extended scene scene at the beginning at the satellite monitoring station. Right before the heat bloom in Antarctica is detected, pizzas are delivered there. Notice Alec Gillis and Tom Woodruff make a cameo appearance as the guys who are eating the pizza. 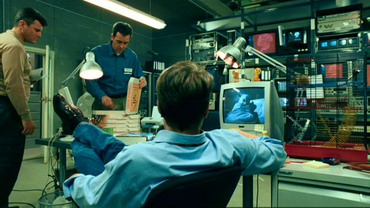 The Other Mexico (Source: R1 DVD, R1 Unrated DVD, R2 Extreme DVD)
After Sebastian finds the bottle cap, he asks Juan, the person who funds the archeological dig, for another month for them to find something. Juan tells them they can’t and he’ll get another team to find what he’s looking for. In the commentary, Paul Anderson says this scene went on for too long in terms of pacing. There was apparently a false-scare when Sebastian is in the cave but it didn’t work according to Anderson. The scene was also cut down because it weakened Sebastian’s character a little bit. 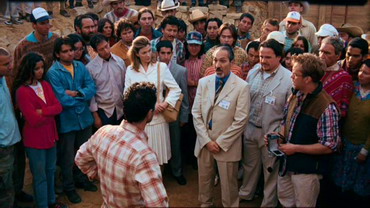 The Sister (Source: R1 Unrated DVD, R2 Extreme DVD)
Lex and Miller are on the helicopter and Lex talks about her father training pilots and about her sister who moved to Florida. Paul Anderson says this scene was cut because the audience already knows why Lex is an expert in her field due to the introduction scene of her climbing the mountain. 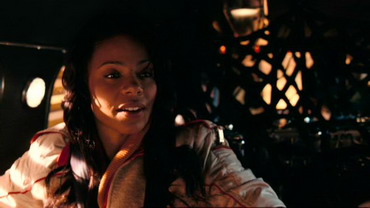 Beakers (Source: R1 Unrated DVD)
Thomas tells Sebastian that Weyland’s cheque cleared. Then a shot of Miller starting the engine on one of the ploughs. Verheiden tells Miller to get off and tells Lex to keep the beakers away from the equipment. Miller doesn’t understand what Verheiden means by beakers. 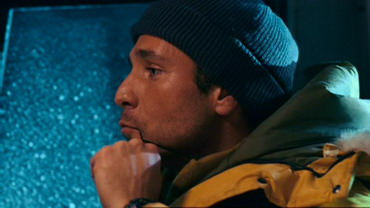 The Scorpion (Source: R1 Unrated DVD, R2 Extreme DVD)
Lex and Miller are looking at some bones when they hear a noise from somewhere. Lex, Sebastian and Thomas explore a little further and discover a fossilized Facehugger which Sebastian believes to be some kind of scorpion. Paul Anderson cut this scene because “it was a foreshadowing that came too late” – we had already seen the Alien Queen wake up prior to this scene.

The Predators Split Up Story (Source: R2 Extreme DVD)
The three Predators make their way to where their shoulder cannons are in the pyramid but instead they find them gone. They split up and go after the humans. Paul Anderson cut this scene because it “demystified” the predators and made them less scary if we knew what they were doing.

Actually It’s Doctor (Source: R1 Unrated DVD, R2 Extreme DVD)
Miller and Verheiden are trapped in a section of the pyramid, Verheiden is rambling and Miller tells him to calm down. Miller explains they’re not dead yet and Verheiden replied with “Well, thanks, Professor”. Miller goes on to state that he’s a doctor.

Connor’s Death (Source: R1 DVD & R1 Unrated DVD)
In the theatrical version, we never saw what happened to Connors in the shaft but the scene has been extended and it now reveals he was dragged away by an Alien.

Making History (Source: R1 Unrated DVD, R2 Extreme DVD)
Weyland is looking at one of the predators’ shoulder cannons and is surprised that it hadn’t been damaged. Max talks to Weyland about one of their men dying and Weyland explains that the person died trying to make history.

Weyland’s Death (Source: R1 Unrated DVD)
Lex and Sebastian argue about saving Weyland. CGI blood has also been added to Weyland’s mouth after he has been stabbed by the Scar Predator.

Miller Gets Caught (Source: R1 Unrated DVD & Script)
After being dragged away by an alien, Miller manages to escape and reach the staircase where Weyland had been killed. Two aliens are watching Miller as he looks at Weyland’s body.

The duct opens up into a larger chamber. Miller crawls out and stands. He slowly moves into… the staircase. Miller sees something, walks over to it. It’s Weyland’s dead body. High Angle looking down on Miller in the foreground something moves. High up in the chamber above the staircase are Aliens preparing to attack the unsuspecting scientist.

Teenager (Source: R1 Unrated DVD, R2 Extreme DVD)
Sebastian explains the three predators in the pyramid are in fact teenagers and this is some kind of ritual they have to go through to prove that they’re worthy.

Love Scene (Source: R1 Unrated DVD, R2 Extreme DVD)
Lex and Sebastian are running when they reach a wide gap. Lex almost falls off while Sebastian grabs her just in time. There’s a brief ‘moment’ between them. They go back the way they came only to be confronted by an alien. Then the scene carries on just like the film where they jump over the gap. This scene was cut to make the jump more dramatic so it appears that they jump across the gap when they first reach it instead of afterwards. 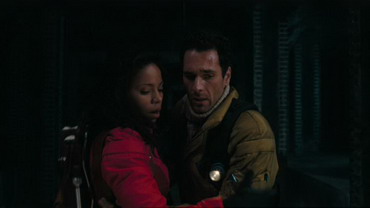 Predator Humor (Source: R1 DVD, R1 Unrated DVD, R2 Extreme DVD)
While making a shield for Lex out of an alien’s head, the predator touches a nerve in its brain deliberately forcing the alien’s inner jaw to spring out. Lex smiles at this when she realised what the predator did. It’s not hard to figure out why this scene was cut.

Most of the scenes listed above were found in the Unrated DVD but there were a few alterations to some scenes to add more CGI blood. They’re not really deleted scenes as such. The CGI blood was added especially for the Unrated DVD. Blood has been added to the blades when a Predator stabs one of the mercenaries on the surface. A little blood has been added when one of the mercenaries gets impaled by a spear. Blood also drips down by his feet. When Quinn is at the bottom of the shaft, the Scar Predator kills him and a lot more blood appears on the rocks than before; Blood is now present on Rousseau’s shirt and in her mouth prior to the Chestburster emerging. A lot more blood has been added to Stafford’s death when he’s caught inside a Predator’s net. Blood covers the net and when the Predator finally impales him with his Spear, you can now see a lot more blood flowing down the spear. For a more in-depth look at the Unrated DVD, check out the Theatrical vs Unrated page.