A concern for many fans has become a prevalence for filmmakers to include homages to the original Alien and Predator films in the new ones, with this being a major concern for Predators in particular. So I decided to take a look at the last 3 films released, Alien vs. Predator, AvP: Requiem and Predators.

I define a homage as a direct “tribute” or copy of scenes, dialog or elements specific to a previous movie in both franchise. For example, in Predator 2 the dialog “you are one ugly motherfucker” is said by Harrigan and is said later in Alien vs. Predator. This is a homage. However, things such as a scene with the medical instrumentation of the Predator is not because it has featured in both Predator movies so far when the Predator is injured.

Dinky Duck
During the early scene in which the satellite detects a heat signature coming from the pyramid, you can see a dinky duck in the background during the shots of the monitor. This is a homage to Alien in which you see a dinky dunk on the table. 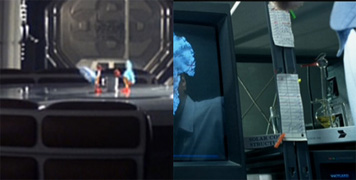 The Knife Thing
Following the briefing scene, Weyland is in his room looking at images of the pyramid. He uses his pen to do do the knife trick that Bishop did during Aliens. 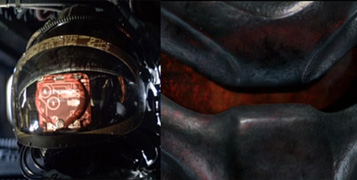 Scanning Light
When Miller is exploring the whaling station, we see an interior shot of the light from his flare moving from right to left. This is a homage to Aliens in which the scanning device enters the Narcissus and emits a beam of light that scans the shuttle. 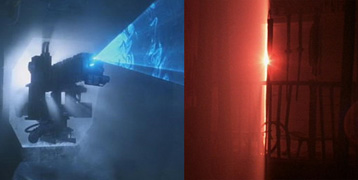 Queen Embryo
In the centre of the floor of the sacrificial chamber is a representation of the Queen embryo that was used as a promotional image for Alien 3. It is pretty much an exact image except in the movie it’s flipped. This image is also repeated on statues and walls throughout the pyramid.

Translucent Egg
I’m unsure about whether to call this one a homage. When the eggs first appear in the sacrificial chamber, Thomas shines his flashlight on the eggs, revealing a fluttering face-hugger inside. This is similar to Kane’s first encounter with the eggs in Alien. A translucent egg was never featured again in any of the other Alien films.

Looking Over the Edge
It’s only a very brief shot but as Lex pulls herself up from over the edge of the ruined bridge, it mirrors the shot in which Ripley glances over the ladders when she’s trying to get to the shuttle in Alien.

The Team Up
The eventual team-up between Lex and Scar is a homage to the original Randy Stradley AvP comic series. Broken Tusk and Machiko Noguchi also teamed up to eventually defeat the Queen in the comic series.

“You Are One Ugly Motherfucker”
As Lex and Scar are escaping, they are attacked by Aliens. Lex uses a piton gun to kill one of the Aliens, remaking “you are one ugly motherfucker”. This is a homage to Predator 2 in which Harrigan says this to the Predator when he takes its mask off.

Receiving the Mark
The use of Alien blood to mark the Predators was first seen in the original Aliens vs. Predator comic series. The female protagonist from the series, Machiko Noguchi was also branded with the mark by the lead Predator. This is a clear homage to the comic series.

Defeating the Queen
The shot in which the Queen disappears into the depths of the lake is a possible homage to Aliens as the Queen is falling through space having been ejected from the Sulaco.

Meeting the Elders
Another homage to the original comic series is after Scar is killed, the Predator Elder decloaks. He notices the mark Scar left on her cheek and offers her his weapon. While not quite the same as the comic, Broken Tusk’s clan returns to find Machiko and notice her scar and allow her to join their clan.