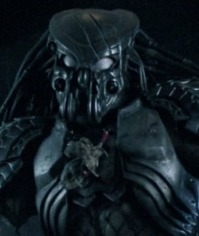 The Celtic Predator is one of the Predators that appears in the 2004 film Alien vs Predator directed by Paul W.S. Anderson. Unlike the previous films, the Predator was designed by Amalgamated Dynamics and portrayed by an uncredited Czech stuntman.

The Predator comes to Bouvetøya Island in Antarctica with two other Predators as part of an ancient training ritual. They came to Earth to hunt xenomorphs in an underground pyramid as a rite of passage. He is eventually killed by the Grid Alien after a ferocious battle.

The Celtic Predator, along with Scar and Chopper, came to Earth in order to take part in a rite of passage ritual which takes place every 100 years. Adolescent Predators go there to hunt xenomorphs so that they can prove themselves to the Elder Predators. It’s revealed that the Predators were using a Queen Alien in the pyramid to breed xenomorphs to hunt and three shoulder cannons were hidden down there for them to use.

The Predator mothership arrived at Bouvetøya Island, Antarctic and drilled a hole through the surface to an underground pyramid. The heat from the laser attracts the attention of Charles Bishop Weyland who discovers the pyramid and sends an expedition team down there. The mothership drops the three Predators off in pods and they quickly dispatch the mercenaries on the surface. They eventually reach the underground pyramid and realise the humans have stolen their shoulder cannons.

The Celtic Predator used his net launcher against Stafford and eventually kills him with his combi-stick. After Chopper is killed by the Grid Alien, a huge battle between Celtic and Grid takes place. Celtic manages to sever part of the xenomorph’s tail which in turn melts his wristblades. Grid splashes acid onto Celtic and his armour begins to melt. The Grid Alien disappears and pounces towards Celtic and he managed to use his net launcher just in time.

The xenomorph falls through the floor into the room below and Celtic is about to kill it with his dagger. The acid from the xenomorph begins to melt through the net, allowing Grid to escape. It pounces on Celtic and uses its head-bite, killing the Celtic Predator.

The Celtic Predator is much bigger than Scar and Chopper and relies more upon its size and menacing appearance to win fights rather than skill. He also appears to be the leader of the three Predators in Alien vs Predator. He is seen a few times taking the lead, reading the holographs and directing the other two Predators where to go. Celtic was perhaps a little too over-confident, not realising that some of his weapons were not resistant to xenomorph acid which cost him his life.

Celtic had lots of weapons and equipment. He could double the length of his Wristblades and they were reversible. He had a Medi-Kit on his left shoulder, a Combi-Stick on his back which he may have used on the battle on the surface. He definitely used it to kill Stafford later on. The Net Launcher returns and is incorporated into his gauntlet. He used it against Stafford and it appears to impervious to any kind of material. Celtic later used it against Grid Alien and perhaps didn’t expect Grid to break free. The Wristblades, Net and Armour seems susceptible to acid damage but other weapons weren’t. Celtic possesses the Shuriken which is retracted on his belt and we did see the Ceremonial Dagger which he was about to use against Grid.

He was able to cloak rendering him invisible to humans but could still be detected by Xenomorph. Celtic’s mask included various vision modes to detect humans or Xenomorphs. His gauntlet was also capable of holographics showing the pyramid and where Weyland’s team were. His gauntlet presumably had a Self-Destruct device too. 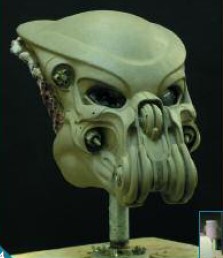 The filmmakers felt that since the Predators would be battling Aliens as well as humans, they would need more protective armour. The armour of Jungle Hunter in Predator had more Asian and tribal influences where as City Hunter in Predator 2 was more ornate, almost insect-like. So ADI had to try and combine the two. Much of the ideas for the armour was provided by concept artists Farzad Varahramyan and Joe Pepe.

For the Xenomorphs, ADI reused moulds from their work on Alien Resurrection but for the Predators, they hadn’t any previous experience in creating Predators so it all had to be done from scratch. To reflect their look in the comics, they were given wider shoulders, a smaller waist, smaller heads and the dreadlocks were made longer.

The Predator weapons were refined more this time round and the Combi-Stick/Spear became sleeker and more elegant. The Disc was changed into a multi-bladed, collapsible buzz saw. The twin wrist-blades were updated and made longer. Five different helmets were created.

The shoulder cannons were made much bigger than previously seen and their thermal heat vision was changed from blue to orange as Anderson thought it looked cooler. Celtic Predator was played by an uncredited Czech stuntman.