I think this is about the third time I’ve reviewed Alien vs Predator since it was released. I thought it was worth doing another review as AvP Requiem sorta set the benchmark for how bad this franchise has got. 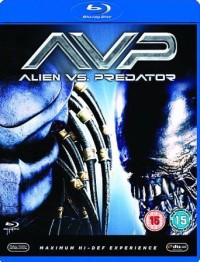 AvP has been a long time coming. Ever since we saw the Alien skull at the end of Predator 2, an AvP film has been rumoured for a long time but the project never got off the ground until Paul Anderson came along. The movie’s about some people exploring an underground pyramid below the ice in Antarctica. They find out later in the film that it is a hunting ground for Predators and they were deliberately lured down there to be hosts to the xenomorphs.

The remaining characters are caught in the cross fire between two warring species and they must fight for their survival. The film was written by Paul Anderson with a lot of revisions by hack-for-hire Shane Salerno. After seeing AvP Requiem, you have to sorta wonder how much damage Salerno did to Anderson’s script. I think Salerno’s job was mostly to cut his script down so the movie would be under budget. Originally there was going to be five teenage Predators and this was changed to three. Alien writers Dan O’Bannon and Ronald Shusett also get story credits because Anderson allegedly stole the underground pyramid idea from their early Alien script. Either way, the story as it stands does have a lot of potential. It’s never going to be ideal setting it in the present on Earth as opposed to the future on a different planet. It’s set in the remote place, Antarctica, so continuity with the Alien films is preserved.

The Blu-Ray includes both the Theatrical and Extended version. The Extended version doesn’t add a whole lot to the film. We get a different opening set in 1904 in Antarctica. I actually prefer this opening. Other scenes don’t really add much to the story. 20th Century Fox also added CGI blood to a lot of the kills. It’s kinda obvious that it’s CGI, I guess it was too little, too late. You can view this article for a comparison between versions.

We’re introduced to the main characters at the start of the film. We’ve got Lex who is an environmentalist played by Sanaa Lathan. Fan-favourite Lance Henriksen plays Charles Bishop Weyland who organises the expedition to the pyramid. This obviously conjures up problems as to who Bishop was at the end of Alien 3. Other characters include Sebastian (Raoul Bova), Miller (Ewen Bremner), Stafford (Colin Salmon), Verheiden (Tommy Flanagan), Connors (Joseph Rye), Rousseau (Agathe De La Boulaye), Quinn (Carsten Norgaard), and Thomas Parks (Sam Troughton). The characters are all rather boring and forgettable. I don’t think it’s a huge problem. When we see a film like this, it’s the creatures we’re looking forward to seeing on the big screen, not the humans.

Let’s get the most obvious problem out of the way. The movie is PG13, the only film in the entire series not to be R-Rated. It’s pretty sad the studio betrayed the fans like this. I can’t really blame Anderson for this but he did lead everybody to believe from the outset that it would be R-Rated. I think the rating does hurt the movie. All the human kills are implied offscreen and the ones that are onscreen are completely void of any blood. Particularly the chestburster sequences. Dialogue has been deliberately watered down.

The film is absolutely flooded with homages to the previous Alien and Predator films. They even used the same dialogue in places. It’s not as a bad as AvP Requiem but it does get tiresome seeing them copying ideas from the originals instead of thinking of something new to do. The biggest issue is the number of things Anderson borrowed from the comics. Sorry, I just don’t like expanded universe concepts and they should have kept them to a minimum. The team-up, the blooding. Lex is essentially based on Machiko, a character from the comics who joins up with the Predators.

Let’s talk about the creatures. Amalgamated Dynamics were hired to do the creature effects. They had previously worked on Alien 3 and Alien Resurrection and worked on AvP Requiem after AvP. I don’t have anything against Tom Woodruff and Alec Gillis personally. They seem very passionate about the series but their work isn’t the best. I have to wonder if their poor designs were down to them or Paul Anderson. For the Aliens, they basically used the same costumes as Alien Resurrection but painted them black.

Compared to what they did to the Predators, I don’t particularly mind the alien designs. Credit has to be given for the Queen. It’s a combination of hydraulics and CGI, and it works really well. The shot of it rampaging through the pyramid after it is cut free is terrific. The Predators have been treated far worse here. They are bulky, slow, and Scar’s facial design is beyond recognition. He actually looked like an action figure. Supposedly, Paul Anderson wanted to humanise the Predators for some bizarre reason. This was ADI’s explanation for the designs.

Hence the team-up. It really deserves a whole paragraph to itself. I think up until this point in the film, I could actually forget about all the other problems but this takes the f**king biscuit. In some bizarre homage to the comics, Lex teams up with the Predator to survive. How the people at 20th Century Fox thought this was a good idea is beyond me. Predators kinda proved that a teamup could work. But the circumstances were vastly different in Predators. The Predator was at death’s door and had no choice. I mean, the way Anderson did it was in the worst possible way, even implying that there was some weird romance going on between them. Even having them riding the sledge up the tunnel and them running in slow-motion. This could have easily been fixed with different editing. I hated AvP Requiem but nothing in that movie even comes close to how bad this was.

AvP introduced some new Predator weapons and alterations to their equipment. The standard weapons like the Shoulder Cannon, Spear, Wristblades and Net Gun make appearances. New weapons include the Shuriken which is an alternative to the Disc weapon. There’s also an Ornamental Dagger. The Predator ship is a completely different design and so is the Predator heat vision. I wasn’t keen on these changes but you could argue that it was a different clan of Predators with different rules and technology. Ian Whyte plays the lead Predator: Scar. I like him. I don’t think anybody can replace Kevin Peter Hall from the Predator films but Ian Whyte gives a good performance. He later returned to do AvP Requiem.

In the film, it takes like 40mins before we actually see an Alien fighting with a Predator. The Grid vs Celtic fight is really the only time in the movie when they battle. It’s great to watch, I’ll admit that but it is a bit hard to believe that one Alien could kill two Predators in the space of a few minutes. A stand-out sequence for me is the flashback sequence near the end of the film. This explains the story a lot more and how the Predators helped ancient civilizations. You could have actually built a whole movie around that scene. The final battle with the Queen is pretty entertaining too. It’s a combination of CGI and a hydraulic Queen.

I think the best thing about the movie is how much Anderson actually managed to get done with the relatively low $60M budget. It was shot in Prague so the sets were cheap to build but it looks all so authentic. It does give you a very epic feeling. The visual effects are, for the most part, wonderful too. Particularly when Grid impales the Gill Predator and it’s interfering with its cloak. It looks very nice. The score of the movie was done by Harald Kloser (Day After Tomorrow, 2012). It’s all orchestral, very alien-esque, very well-suited to the movie, I think.

Alien vs Predator is presented in a 1080p transfer in its original 2:35:1 ratio. The picture quality isn’t as good as you’d hope. Generally, it’s very clear and detailed but there’s also a lot of grain. In terms of audio, the set features a DTS-HD MA high definition audio track. It’s top-notch. Dialogue is very clear throughout.

Unfortunately, the Blu-Ray release is very much a bare-bones release. All the content from the DVD Edition is missing. All we really have is the commentaries.

Trailers
There’s the theatrical trailer for AvP as well trailers for Phone Booth and Planet of the Apes.

Trivia Track
The set has a trivia track which basically lists random facts about the franchise while you’re watching the movie. It mainly covers comic-related stuff rather than movie facts.

Well, it’s been quite a few years since I saw AvP. The last time I gave it 1/5 but since AvP Requiem was released, I’ll upgrade my rating to 2/5. It’s still a bad movie but up until the team-up at the end, a lot of its flaws can be ignored. AvP Requiem, on the other hand, is terrible from start to finish. Hopefully, Fox will bring out a better Blu-Ray release in the future, one with better picture quality and also brings over all the extras from the DVD release.