Back in July of 2004, a month a head of the release of the actual film, HarperCollins published the novelization of Paul W.S Anderson’s Alien vs. Predator written by Marc Cerasini. It would be the last novelization of an Alien film until Alan Dean Foster returned for Alien: Covenant earlier this year.

Alien vs. Predator Galaxy – First off I would just like to take a moment to thank you for taking the time to talk to us today and answer some of our questions. Thank you!

For those reading who might not be aware of you, could you tell us a little about who you are and your involvement with the Alien and Predator franchise?

Marc Cerasini – Thanks for this opportunity to talk! I got involved with the Alien/Predator franchise though HarperCollins publishing and Fox, and prior work I’d done for them.

Back in 2001 my wife Alice Alfonsi and I wrote a tie in book connected to the first season of 24 for Imagine, Fox, and HarperCollins – The House Special Subcommittee’s Findings at CTU was not a novel, but a collection of secret files, congressional testimony, etc., meant to tell the back story behind the first season.

The book was a hit and my wife and I suggested a series of prequel novels about Jack Bauer and CTU. It took a few years but that series eventually launched under the name 24 Declassified. I wrote four of the first six novels including the very first one. They sold pretty well and were solidly reviewed.

So when HarperCollins acquired the rights to Alien vs Predator, the publisher and Fox knew I could do the franchise justice. I had previously worked with the Japanese studio Toho on original Godzilla novels, and for Lucasfilm, on the Star Wars franchise, and I thought I knew what I was getting into. HAH! 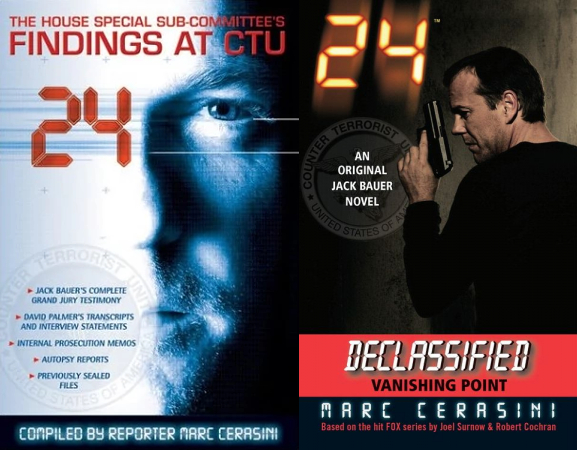 AvPG – Were you a fan of the original movies prior to your work on the adaptation of Alien vs. Predator? If so, which would you consider your favourite?

MC – I was very much a fan. I saw the first film in a theatre the day it was released. I had previously seen Ridley Scott’s The Duellist and was impressed by his direction and production values, and he did not disappoint me with Alien.

People today forget how revolutionary Alien was – the production design, H R Giger’s creature, the workaday setting and average man and woman characters were entirely new. Yes, the plot was borrowed from It, the Terror from Beyond Space, and the eerie, horrific mood from Mario Bava’s Planet of the Vampires. But there is little doubt that Ridley Scott revitalized a tired monster from space genre. James Cameron continued the development with Aliens.

The third film was too bleak and misogynistic, though David Fincher would go on to do some great films – I think Fight Club is a masterpiece – Fincher was wrong for this franchise. Alien Resurrection had a lot of action and intriguing concepts, but the director played things too quirky and darkly humorous for my taste. Prometheus was a return to form but it was a film without an end – more like a prologue for a film to come. Sadly Alien Covenant was not that film – It seemed more like an extension of the Blade Runner universe more than Alien.

AvPG – For over a decade before the film, Alien vs. Predator only existed in comic, novel and game form. How familiar with the existing AvP material were you prior to working on the novelization?

MC – I read the Dark Horse comics when they first came out. The novels I only read after I was commissioned to write the tie in.

AvPG – So let’s talk about Paul Anderson’s script! This one is a bit of a multi-part question! What did you think of the script when you first saw it? Were there any elements that jumped straight out at you as something you’d have to deal with when working on the novelization?

The novel features a mix of ideas that seemed to have been let go early, such as the 2000BC Cambodia opening, five Predators, Sebastian’s change in nationality and Lex’s last name. How did you piece together the information from these different drafts — were you doing it as the script developed, or were you delving into abandoned concepts to flesh out the story?

MC – Here’s where things went south. When I was asked to do the novelization I was sent an early draft and told it was an early draft. It had the Cambodia opening, and there was some confusion about whether the present-day action took place on the North or South Pole. There were five Predators, and Sebastian was not Italian.

The second script I received was supposedly the shooting script. There were still five Predators, the Cambodia stuff was gone, replaced by the whaling prologue which I was told not to write because it was filmed but would be cut. Alexa the heroine had a prior relationship with Quinn, one of the mercenaries hired by Charles Weyland. Sebastian was now Italian, but the character Miller was from Cleveland, Ohio, not Scotland, and that is how I wrote him. There is an epilogue where someone get hold of a Predator weapon and it is turned over to executives at Weyland-Yutani Corporation

There was still confusion about whether we were at the North or South Pole, but I wrote the tie in figuring it was the South Pole, and made the tracked vehicles orange (as they are in Antarctica, by international law). Both polar bears and penguins were mentioned in the script so I wrote them in. Of course polar bears and penguins don’t live on the same pole, but I wrote as scripted with the intention of cutting later (see below why those cuts never happened).

There were other changes—the ice tunnel was shaped differently from the script to the movie. People died in a different order, etc.

In the script I wrote from there is a huge underground battle between the surviving four Predators, the humans, and the horde of Aliens that escape the pyramid. In a prior sequence the Predator who is slain gives birth to an Alien hybrid and that creature joins the fray (which is in my novel) – all of this is NOT in the final cut of the movie, and likely were NEVER FILMED.

The ending of this version takes place in the old whaling station, with Alexa and the Scar sending the Alien Queen back down the ice hole to the buried city by dumping construction vehicles on top of her. Then the city is blown up, the tunnel sealed forever.

I had perhaps a month or six weeks to write an 80-thousand word draft and I finished it on time and turned it in on a Friday. That Saturday I got a call from my brother that my father had died suddenly. On Monday as I was packing for the trip home for the funeral, I got a call from my editor that changed everything.

Someone at the production company had failed to send me the FINAL draft of the script, which was significantly different from the one I wrote from. I was told that Fox would not approve my tie-in without changes and I had a week to make them. I went to my Dad’s funeral, got back on a plane to New York the next day, and rewrote the final draft of AvP in five days.

This final script jettisoned the prior relationship between Quinn and Alexa, aka Lex now. Two of the five Predators, and the whole blowing up of the underground city with the Alien Queen inside ending was also gone.

Even this “final” script had Miller as an American, and other small things that ended up changing, probably on set as they filmed or when they cast a Scottish actor for the role – Miller IS a Scottish name, so I should have figured that out, right? 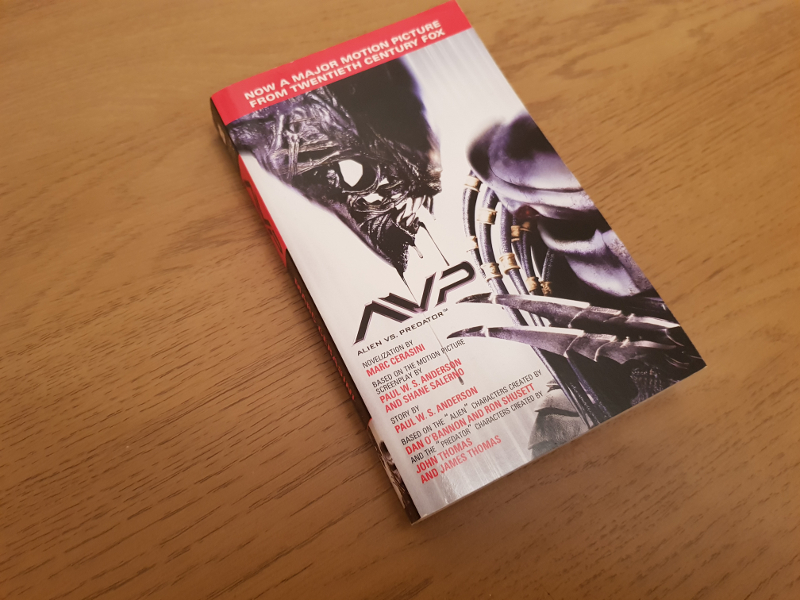 AvPG – One of the points of contention around the finished film was its PG-13 rating. Your novelization didn’t pull any punches when it came to the gore. Was this something you did deliberately?

MC – The scripts I saw – all three of them – could not possibly have gotten a PG-13 rating as written. This came late, obviously for a wider audience, and it worked.

AvPG – How involved were 20th Century Fox, Paul W.S. Anderson or Shane Salerno with your work on the novelization of Alien vs. Predator?

MC – I had no contact with Paul Anderson or Shane Salerno. If I had I would not have written the novel from the wrong script. Unlike 24, where I worked directly with showrunners like Virgil Williams, I was out of the loop and my adaptation showed it.

AvPG – Did you have access to any additional material –  like concept art – while working on the novelization?

MC – Virtually nothing. Not even character drawings of Scar were sent to me. To “facilitate” my final, five-day revision I was given some photographs and drawings and worked some of that description in. But I had no clue what the pyramid temple looked like, so I improvised by finding some advance concept drawings online and using them.

AvPG – What did you think of the finished film when you saw it?

MC – I liked the film, but felt the earlier draft I wrote from was stronger, with more character development, more violence, and an earlier Alien/Predator birth scene that sets up the ending on the Predator space ship very well.

AvPG – To our knowledge the sequel, AvP Requiem, was never considered for novelisation — did you hear any differently? Were you ever approached?

MC – I am likely the reason there was no tie-in novel to Requiem. I was in the middle of a deadline for one of the Coffeehouse Mysteries I write with my wife as Cleo Coyle, and HarperCollins called with an offer. They just got the absolute positively certain final script—they were still sorry about the previous mess—and they wanted to know if I was interested in writing the tie in for Requiem.

I was very interested, but they could only give me two to three weeks to write it, starting that day! As I was on another deadline for an original novel, I regretfully declined. Apparently they found no author willing to write on such a tight deadline—a shame because my AvP tie in was a USA Today bestseller as well as a NY Times bestseller, and I am certain the second novelization would do nearly as well.

AvPG – What are your thoughts on the Alien and Predator series following Paul Anderson’s Alien vs. Predator? Did you like the later movies?

MC – When I finally saw Requiem I was glad I did not write the tie in—not because I hated it, but because there were a lot of characters I would have had to deepen and expand, as novels are more internal than movies. Such complexities would be impossible on a three-week deadline.

Generally, though, I thought the second movie was weak, and that bringing the Aliens to 21st Century America a huge mistake.

Predators, while not great, was an improvement over number two. In my honest opinion, none of the AvP movies were as good as the early scripts to the first film that were not used, or even some of the comics.

AvPG – Once again, thank you for taking the time to answer our questions. Is there anything you would like to share that I haven’t given you the opportunity to with our questions?