Peter Briggs is a name that should be as synonymous to Alien vs. Predator as is Dark Horse Comics or Randy Stradley. Briggs was responsible for the first attempt to bring the concept to the big screen.

Peter Briggs had always known he wanted to be a director. Unfortunately things didn’t quite go to plan for him. He dropped out of college to move away with his girlfriend. Briggs worked his way up through the ranks of the film industry, becoming a runner and eventually becoming a cameraman and getting his union card.

The job market was tough though. “As a cameraman, there are 3000 guys behind your back vying for the job, and I just thought, “this is ridiculous.” And so Peter Briggs turned his sights towards screen writing.  After finding representation, Briggs found employment with the short lived Paramount UK. He was there to help develop science-fiction projects for them with the intention being he’d develop several of them and then write one for Paramount UK.

However, Paramount UK “didn’t actually know what they were doing, how to develop the rich vein of genre material. I was throwing them all this William Gibson cyberpunk bait, and they wanted all these creaking science fiction projects that were past their sell-by date the second they were born.”

Finding himself in a bit of a rut trying to work for Paramount, Peter Briggs turned his aspirations to trying to find work with Joel Silver who was a producer for Predator. Briggs wanted to write a “decent enough sample to get a re-write” and turned his attention to the then recently released Alien vs. Predator comic from Dark Horse. Briggs took the basic story of the comic and wrote his own adaptation of the concept.

“What I did was take the bare frame of the story, eject everything from it that didn’t work, and put in a whole lot more material. So I think probably there’s about 70-75% of me in there. When I handed it in to my agent, he looked horrified, because he had no idea I was writing it, and assumed rightly it’d be a tough sell.” 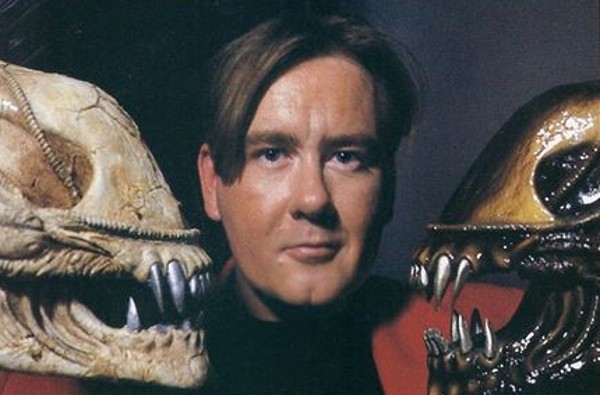 This initial draft, titled The Hunt: Alien vs Predator, was completed between June and September 1991 over a period of 6 weeks and Briggs only hope from the effort was that he’d get some attention or “maybe get a rewrite on some other movie off the back of it.”

The first draft was loosely based upon the Dark Horse comic that made the concept so popular. It was set on the planet Ryushi but instead of the desert prospecting world of the comic, we had a jungle world that served as communications relay. The hunt was no longer a blooding ritual but simply a hunt.

As with many incarnations of the concept, the Predators seeded Ryushi with Aliens but this time the lead Predator, Broken Tusk, had let a Queen bearing facehugger aboard the seeding pod to make things a little more challenging for himself. And of course, all hell breaks loose and it all gets out of hand. The script is readily available online and you can find it in our Downloads section. You can also read our detailed script article. 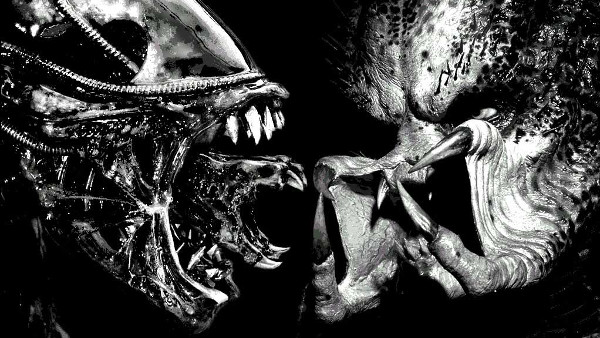 Larry Gordon had been asked to develop an Alien vs Predator film only days before Steve Kennis approached him with Peter Briggs’ spec script.

Briggs’ then agent Steve Kennis coincidently had a meeting with Larry Gordon from Fox and managed to sell the script that very same day. According to one interview with Peter Briggs, Larry Gordon would eventually tell Briggs that the concept of an Alien vs. Predator had only been discussed days before the meeting with Kennis where Fox had asked Gordon to develop the project. It was very much a case of being in the right place at the right time.

Briggs’ first draft was handed to Joe Roth, the then chairman of 20th Century Fox who optioned a second draft which significantly “tidied up” the initial spec script. There are reports that tend to indicate that as many as 4 drafts were produced by Briggs but in AvP Galaxy’s own conversations with Peter Briggs he confirmed he only completed 2 drafts.

Unlike the original draft, Briggs’ second draft never surfaced and details of it are quite sparse. According to Briggs “some of the characters disappeared from it, a lot of the dialogue was re-worked, the beginning’s different, some of the extra sequences are different… There’s about 70% of my first draft remaining in the second.”

Very little about the specifics of Peter Briggs’ second draft are known. One thing that we do know is that the opening sequence of the film is changed from the Predators hunting Aliens in the hived up caverns of a desert planet to being aboard a ship adrift in space. Talking to Alien vs. Predator Galaxy, Peter Briggs told us that the new opening would have had a salvage team pick up one of the Predator’s alien seeding pods. The Predators then show up and dock with the now Alien infested ship.

The crew are all dead, the ship powerless so the artificial gravity is turned off and floating debris fills the corridor. Cue zero gravity combat between Aliens and spacesuited Predators and floating acid blood mayhem.

In an article in Starlog from the mid-90s, Briggs had stated that he had envisioned Joan Chen or Tia Carrere taking on the role of the human protagonist Hiroko Noguchi, whose first name had changed from Machiko in the comics to Hiroko as it was a “more popular Japanese girl’s name.” 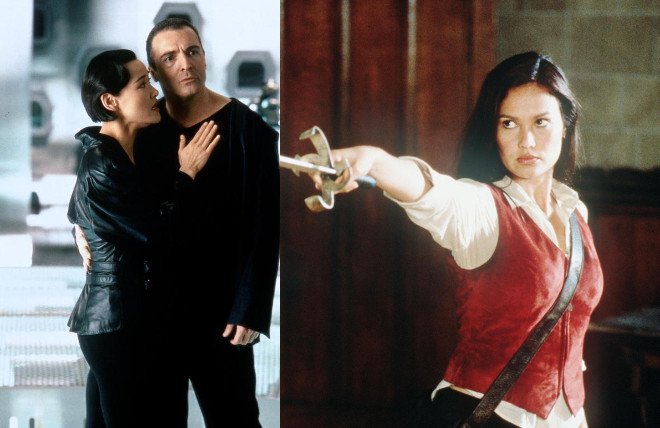 Whilst discussing the practicality of filming Alien vs. Predator in an interview with Andy Diggle in 1996, Peter Briggs also said of his second draft:

“I cut some big scenes from the first draft of Alien vs. Predator because I thought, “Well, these are throwaway, this set is superfluous.” If somebody gave me the money, I think I could go out and shoot that for about 35, 40 million.”

In a later interview with Bloody Disgusting, Briggs said the cost would have been higher, at around 100 million and at the least 60-80 million.

In late 1992 it was reported in the ALIENS magazine that Roland Emmerich was attached to direct Alien vs. Predator. Whilst no writer was named in the brief article, it was stated to have been “loosely based” on the original Dark Horse series, was set on a “jungle planet” and that Largo Entertainment was involved with a budget of around 30 million dollars. 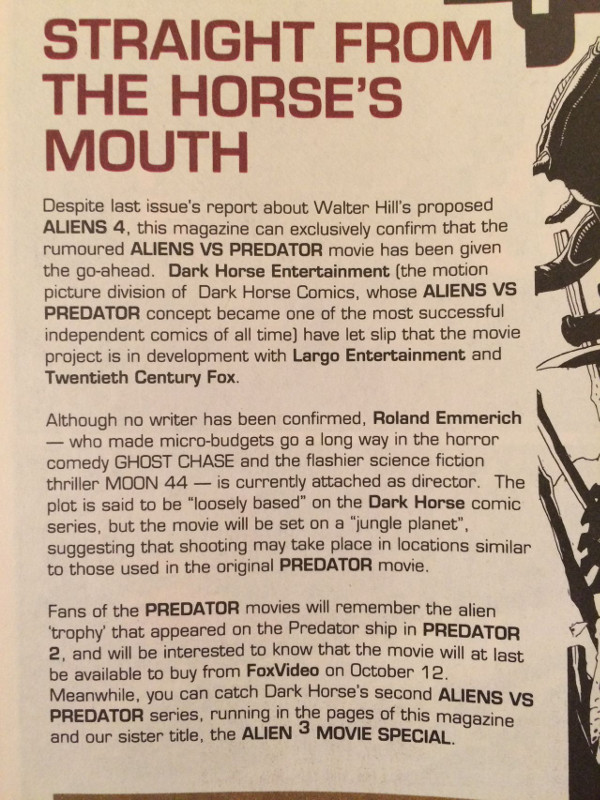 Thanks to forum member HuDaFuK for providing the scan.

Whilst that makes it seem quite likely it would have been Peter Briggs’ script, Emmerich (and his usual partner Dean Devlin) had in fact wanted to throw out Briggs’ work and start from scratch. In an interview published in another magazine they spoke about how the Alien in their film would have been a PredAlien (or PrAlien as they call it). No treatment or script was ever completed for their version though.

After finally seeing Paul Anderson’s Alien vs. Predator, Briggs commented that he disliked the design of the Aliens in the film, stating he always been more impressed with the original design by H.R Giger. He also referred to the Takayuki Takeya “Alien Pile” model kit which featured a Giger-esque Alien with elongated skulls stating “that’s what my creatures would have looked like if I had directed this thing. I’d have gone to extremes.” 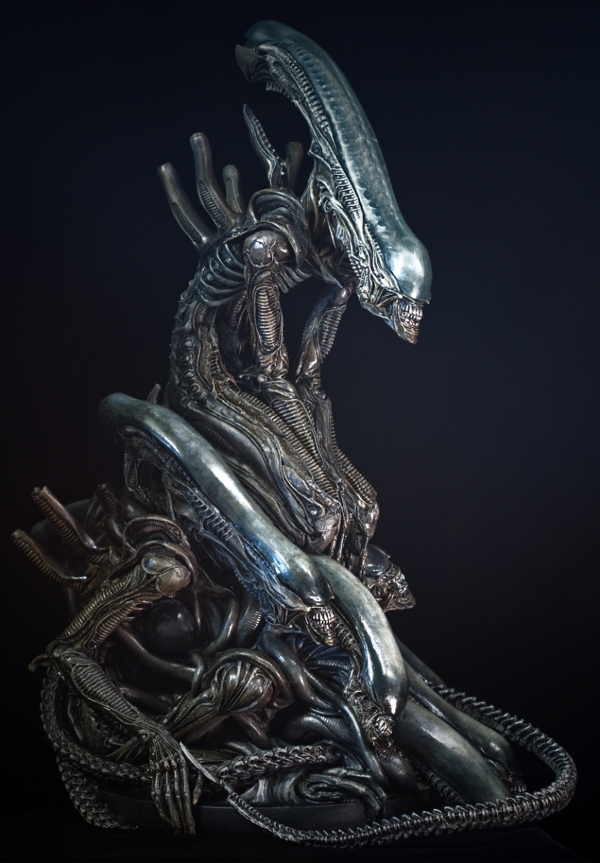 At some point during the development of Alien vs. Predator, Fox commissioned Dave Dorman to do some conceptual design for the PredAlien. The exact dates are unknown but the mid-90s is often thrown around, even by Dorman himself. However, by all accounts the project had died out by 93/94. So the question remains – who was the artwork for?

Whilst Peter Briggs’ original draft hinted towards a Predator-Alien hybrid, none ever appeared in that first draft. Whilst talking to AvP Galaxy, Peter Briggs told us that his second draft never specifically mentioned a Predator-Alien hybrid but during one swarm attack sequence he did mention something along the lines of “vague hints of skeletal juggernauts with forms and shapes reminiscent of the cocooned Predators.”

As mentioned earlier, Emmerich and Devlin were interested in the PredAlien (which they called a PrAlien) being their primary Alien antagonist so it possible that Dorman’s concept work was done for them and their vision of the concept. When AvP Galaxy spoke to Dave Dorman in 2007, he told us that the work was done whilst the film “was still in the informal story stages and they were playing around with the direction of the script.”

Unfortunately this leaves us without any concrete answers so the question still remains – who was Dave Dorman’s concept art commissioned for? 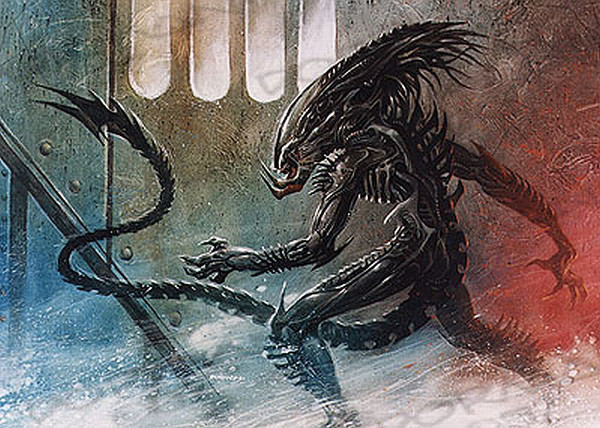 Dave Dorman’s PredAlien design from the 1990s for the AvP film.

Despite Joe Roth being a huge champion of the project, all the in-fighting between the producers of the Alien and Predator properties made it a real challenge getting anywhere with the Alien vs. Predator film. It was primarily resistance from the Alien producers with David Giler in particular who apparently said something to the effect of “I’m violently opposed to this, because it dilutes the whole Alien franchise.” The majority of the issues seemed to be about money though, with fighting over who would get what percentage of the grosses and who would receive what credit.

When Joe Roth left 20th Century Fox in 1993, momentum on Alien vs. Predator began to slow down and the project ground to a halt and disappeared into Development Hell for over a decade. By the time the film was finally released in 2004, there were only two complete attempts at writing the Alien vs. Predator movie – Peter Briggs’ first 2 drafts in 1991/2 and Paul Anderson’s in 2003/4 (with later rewrites by Shane Salerno).

John Davis had been listening to pitches and accepting treatments in the interim though. The most notable of which would come from James DeMonaco and Kevin Fox in 2002. From various reports at the time, their treatment sounded very much like an adaptation of Ian Edington’s Aliens vs. Predator comic, Eternal.

“A man becomes a Predator after discovering a crashed Predator ship. His team of researchers use the Alien eggs to create an environment of conflict to lure the Predators back to study their technology and prolong his life.” 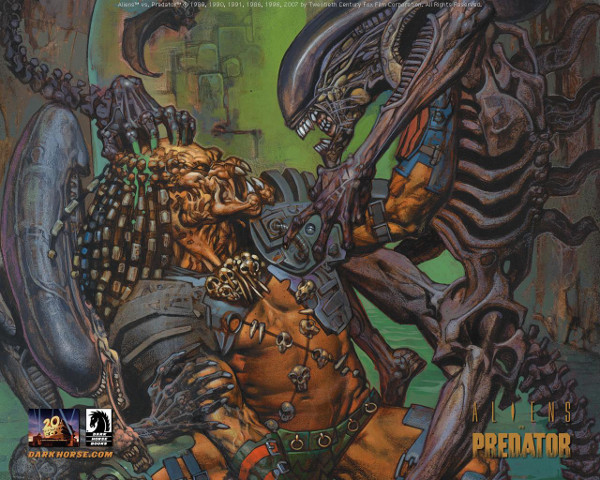 Cover art for issue #3 of AvP Eternal and the TBP.

In fact, early reports of Anderson’s involvement with Alien vs. Predator had him attached to a story that sounded like an adaptation of AvP Eternal. Ultimately the DeMonaco and Fox treatment wasn’t the direction that producer John Davis wanted to take the film. He was more interested in the Earth-bound story he eventually got from Paul Anderson’s pitch which formed the basis of the shooting script that Shane Salerno had re-written for the 2004 release.

Talking on Twitter in 2020, Peter Briggs also mentioned a different Earth-bound concept from Predator pedigree for Alien vs. Predator that he believes John Davis actually had taken to the treatment stage!

“There WAS a treatment (I think that was John Davis produced?), which was set in the snow in somewhere like the Himalayas, if I recall. I might be wrong, but I thought that was Jim and John Thomas who did that?”

In an interview with Bloody Disgusting in 2004 Peter Briggs had stated that at that time Fox had expressed an interest in doing his adaptation of Alien vs. Predator “with a bit of reworking”. Obviously that never came to fruition but it may have been nice to see.

I’d like to thank Peter Briggs for taking the time to talk to us and to fact check the above recounting of the early days of the Alien vs. Predator movie. I’d also like to thank Jamie Warr for providing me with his own interview with Dave Dorman.