One of the most iconic moments in the Predator franchise occurs when Detective Mike Harrigan, played by actor Danny Glover, pursues an ailing City Hunter Predator onto its spacecraft during the thrilling finale of Predator 2.

In a battle to the death, Harrigan ultimately triumphs over his alien foe, only to discover his victory was being observed by a pack of intergalactic hunters which are now often referred to as Lost Predators, who shockingly respond not in hostility, but admiration and respect toward the Detective’s prowess.

While little has been made known about the Lost Predators since the film’s 1991 release (a name given to them by creature effects designer Stan Winston once the suits went missing shortly after production), nothing has remained more mysterious than the spacecraft they traveled in.

Pulsing lights. Strange hieroglyphics. Vaporous fog. Nothing has captured the imagination of Predator fans more than this stunning and unequivocally exotic alien craft. But what were the inspirations behind one of the most incredible and unique spaceship designs in cinematic history? And what mystery lies within those glowing walls?

The genesis of the Lost Predator spacecraft can be traced to when writers Jim and John Thomas, and producer Joel Silver started developing Predator 2’s story during the summer of 1989.  The brothers hadn’t officially started the script when director Stephen Hopkins joined the collaborative team in August 1989. Hopkins soon began conceptualizing some of the writers’ ideas through storyboards, some even before the scripting pen met paper.

By time the first draft was completed on October 5th, 1989, initial details of the Lost Predator spacecraft’s exterior were fleshed out substantially more than its interior, likely due to the film’s finale occurring outside of the ship in an entirely different setting.

Originally, the epic showdown between the City Hunter Predator and Detective Mike Harrigan was not set within the alien spacecraft, but rather in a basement boiler room of a downtown Los Angeles apartment building. Once the Predator receives a fatal blow it cannot recover from, it vanishes through a boiler room wall. However, it is actually no longer a wall, but a hole that is disguised by a holographic beam emitted from a stationary Predator device placed just outside it.

Passing through that hologram wall leads Mike Harrigan through a long, abandoned subway tunnel to the Lost Predator spacecraft. Near the ship lies the dying City Hunter, collapsed on the ground and unable to find the strength to return to the safety of its vessel.

On page 107 of the first draft, the exterior of the ship is portrayed as a “scared and battered spacecraft, aged with meteor hits, burns and space dust.” The script goes on to depict the outside of the craft as a “strange metal” and interestingly refers to it as the “ship’s skin.” And by interrupting a beam of light, Harrigan is able to open a section of that strange metal revealing a wall of sliding, fleshy sounding “gel-like modules,” containing trophies of recent kills. 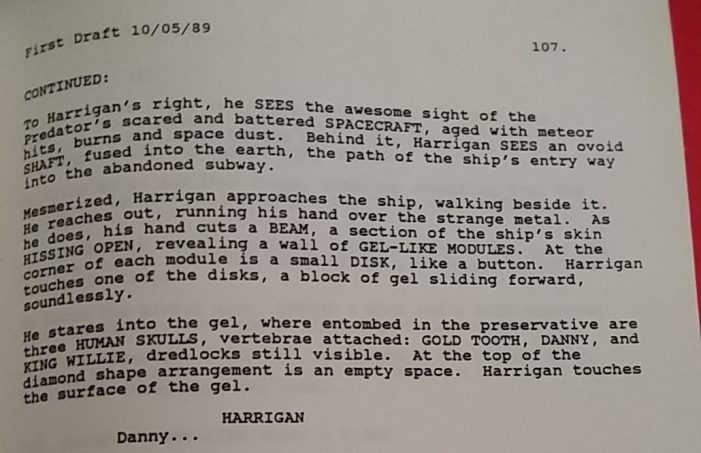 The elder Predator, known as Grayback, and his hunting party soon exit the spacecraft to greet the victorious prey, as well as retrieve the City Hunter’s body. This leaves Detective Mike Harrigan without a reason to ever go onboard, so our only glimpse of the vessel’s interior comes on page 53 when the Predator returns to its ship to clean a recent prize: the skull of Jamaican Voodoo Posse leader King Willie.

At that point it appears the Thomas brothers had yet to crack the interior design of the Lost Predator Ship. This was made obvious by the script’s only brief and vague description of the interior being described as “a chamber of strange design.” Ironically, the corresponding storyboards certainly didn’t depict anything within the craft’s interior as strange. Instead it depicted the Lost Predator ship interior in a very formulaic fashion.

The storyboards consisted of paneling, rails and pipes resembling a very human design, similar to what one would find within the corridors of a military boat or submarine. (However, it is interesting to note that the script indicates the gel-like modules that housed the trophies were also accessible from the inside.) 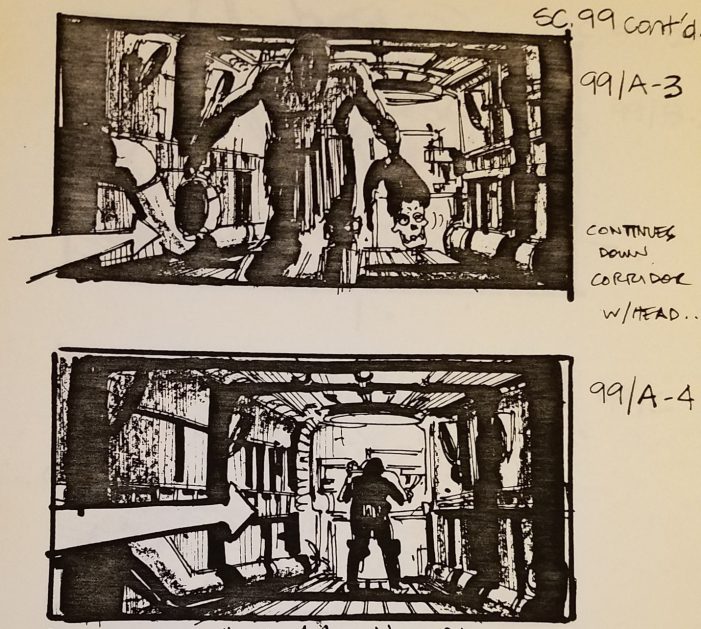 During Jim and John Thomas’ commentary for the 2004 Special Edition DVD release of Predator 2, Jim Thomas recalled the challenge of conceptualizing the Lost Predator ship.

“We went round and round about how to describe this spacecraft because it’s so difficult describing alien technology when such a thing doesn’t really exist.”

By time the second draft of the Predator 2 script was completed on December 15th 1989, the portions of the script featuring the Lost Predator Ship drastically changed. All the details featuring the exterior of the ship were now excised, and the film’s finale was moved from the boiler room to inside the spacecraft with a completely different and unique vision of alien design. Within the revised pages, the Thomas Brothers described the interior of the Predator vessel resembling the shell of a Chambered Nautilus. 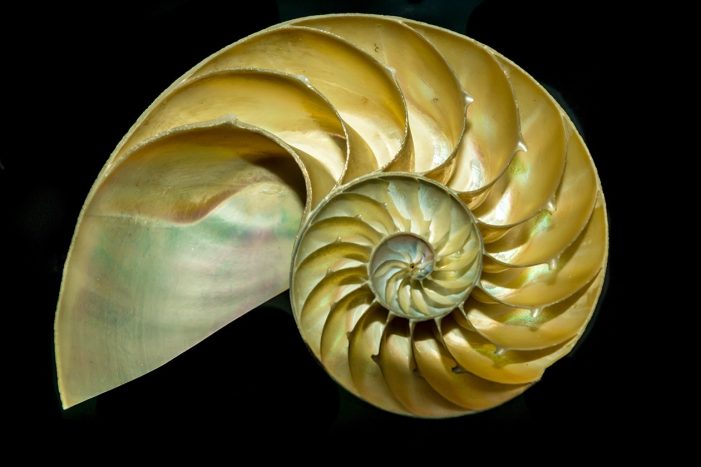 The Chambered Nautilus is a saltwater soft-bodied type of mollusk that lives within a nearly perfect equiangular spiraled hard shell, one that contains many separate partitions. The shell fulfills the function of buoyancy for the Chambered Nautilus, which allows it to dive or ascend in seawater by actually controlling the volume of the liquid within each of the shell’s compartments.

This underwater creature was a fascinating choice to become the basis for the Lost Predator Ship design. But who turned the design in this direction? That stroke of geninus belongs to production designer Lawrence G. Paull.

Acclaimed for his work on films like Back to the Future and a recipient of an Academy Award Nomination for his production design in Blade Runner, Lawrence “Larry” Paull was brought in shortly after the script’s first draft was completed. Speaking on the subject in the December 1990 issue of Fangoria, Larry Paull revealed:

“There was talk about doing a space vehicle for the first Predator, but it was ultimately cut from the script. So when I got the job on the sequel I talked to the first film’s production designer and asked him what he had had in mind. He had thought of doing things with lights and lasers.

But I had the idea of designing a space vehicle unlike anything that had ever been designed before. When you see the Predator in here, you’ll understand the ties between himself and his ship. It’s an environment, both technological and reptilian, where the creature and its ship blend and work together.”

Within the second draft, the Thomas Brothers went on to depict the Lost Predator spacecraft as “organic-looking” with “membrane-like” walls and the floor of the ship was obscured in a “a fog of blue-green gas.” Once the gas is inhaled, it is immediately recognized by Detective Mike Harrigan as “methane,” which ultimately makes it laborious for the police officer to breathe.

Oddly enough, methane is actually a colorless, odorless gas that is commonly combined with other gases so it’s detectable by scent. Often methane is mixed with hydrogen sulfide which creates a rotten egg smell, but there were no further clues on what precise scent Mike is recognizing.

By time the third script draft was completed on January 16th 1990, there were even more significant additions in regards to the Lost Predator ship. While the exterior of the spacecraft remained undescribed and the interior still resembled a Chambered Nautilus, the color of the methane gas had switched from blue-green to brown. There was also now something referred to as an “activated life chamber” that the injured City Hunter Predator desperately tries to get to, possibly to heal itself.

Perhaps what’s most intriguing among the third draft additions is how Detective Mike Harrigan is ejected from the spacecraft. After receiving the flintlock pistol from Grayback, the Lost Predator spacecraft appears to expel the film’s hero, all while indicating this unique craft is indeed “bio-mechanical.”  The script reads:

“Suddenly the hard floor below him changes, becoming nearly liquid, Harrigan dropping into the darkness in a controlled fall, blurred impressions of the ship’s bio-mechanical structure rushing by as a powerful, low-pitched whine builds to an ear-splitting crescendo.”

After the third draft was greenlit and became the basis of the shooting script, Mike Harrigan’s very interesting ship departure was modified on January 30th 1990 in favor of a more thrilling, yet familiar Hollywood trope. The revision called for Harrigan fleeing through a hatch and running for his life to escape a “blast of flames” from the Lost Predator ship’s thrusters. 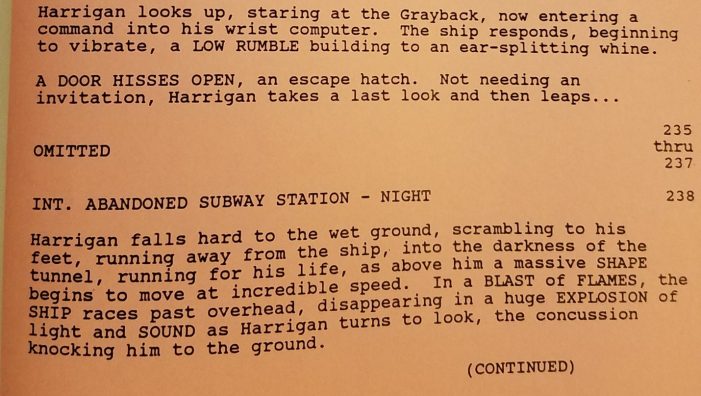 Everything else previously scripted remained the same when Predator 2 officially started principal photography in February of 1990, including the exterior of the ship being shrouded in darkness, the unbreathable methane fog, the fleshy gel-like module trophy display and Harrigan not encountering said display. Changes to these aspects were made during production and not reflected within Jim and John Thomas’ shooting script.