Bringing The Ship To Life.

The responsibility of bringing the Lost Predator ship to life rested on the shoulders of production designer Lawrence G. Paull. Paull’s excitement for the project was contagious, and he relished the idea of creating something “unlike anything seen before in films.”

Construction began on the grandiose set of the spacecraft’s interior in an expansive Twentieth Century Fox sound stage lot in Los Angeles, California. As described in the December 1990 issue of Fangoria, the outside of the Lost Predator Ship set appeared to be just a “jumble of scaffolds, futuristic columns and wooden braces” that “formed a surrealistic web.” 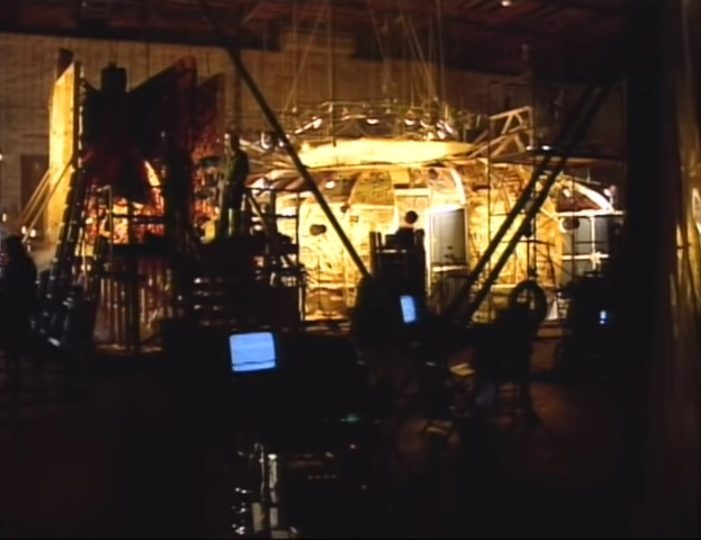 While that “surrealistic web” didn’t appear like much from the outside, what was being created within left the crew very impressed. Peter Levy, Predator 2’s director of photography, expressed his admiration for the set when he sat down for an interview with the American Cinematographer magazine for their January 1991 issue.

“Have you seen a nautilus seashell cut in half? It has all those little chambers spiraling out.  Stephen (Hopkins) wanted to use that idea so we did it in browns and the walls were molded of fiberglass in wholly organic shapes. A circular set. There’s nothing high tech – no buttons or levers of flashing screens.”

“These were backlit fiberglass sections that were constructed by Larry and the whole ship feels kind of organic like you’re inside a snail’s shell or something. I was pleased with this stuff. It really felt different. It was very difficult to light and make it feel that it had a reality to it, but it was so unusual and kind of mystical.” 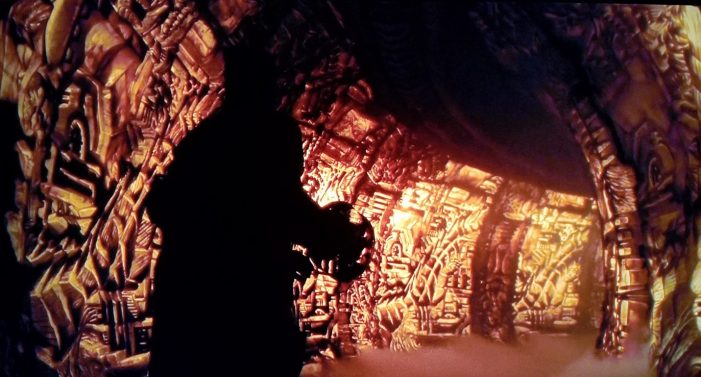 What really made those organic walls compelling and visually arresting was the Predator hieroglyphics etched into those walls. According to screenwriter John Thomas, speaking again in his 2004 DVD commentary, these were not some just nonsensical pictographs.

“Larry Paull, our designer – he kept this kind of central American, almost ancient Aztec, motif running through it. That these were ancient beings and they have been coming here for a long time. If you look carefully at the style of the walls you can actually see forms of creatures, almost like hieroglyphs that are embedded in the walls there.”

Director Stephen Hopkins concurred, revealing that the hieroglyphs were in some ways “kind of inspired by some of the old Mayan representations of Gods, you know which some people think who were extra-terrestrials anyway.” 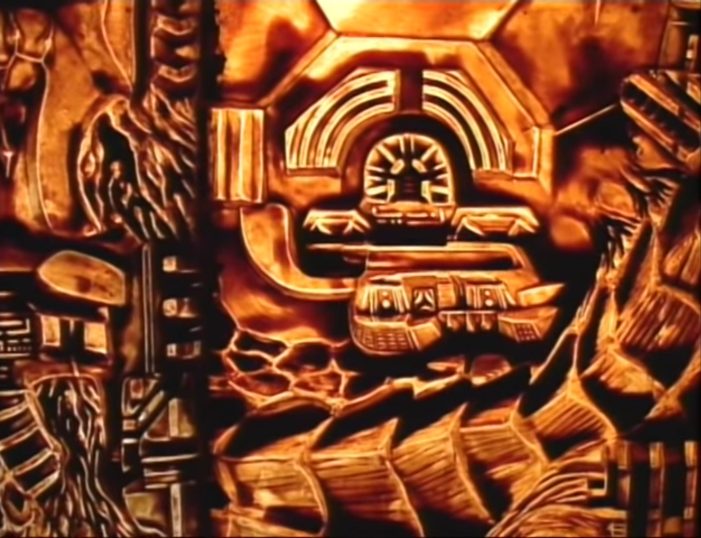 While the Predator spaceship’s set Larry Paull was creating was visually stunning, lighting was the key to conveying its wondrous nature. It was through lighting, director of photography Peter Levy explained to American Cinematographer, that the Lost Predator Ship was transformed into an apparent living, breathing thing:

“We made the walls glow and they were not only throbbing, like a heartbeat, but also pulsed and moved about the room, so that the lights were breathing and that breathing was traveling. It felt like being inside something living.”

There was also a mysterious monolithic structure standing in the center of the Lost Predator ship’s antechamber. This was the massive formation Detective Mike Harrigan’s leans against to gain his composure moments before noticing the chamber’s trophy display. Eerily imposing, this edifice stood over nine feet tall. Along with its sister pieces, they were all hand carved out of a very dense Styrofoam by Larry Paull’s crew and then artistically painted. 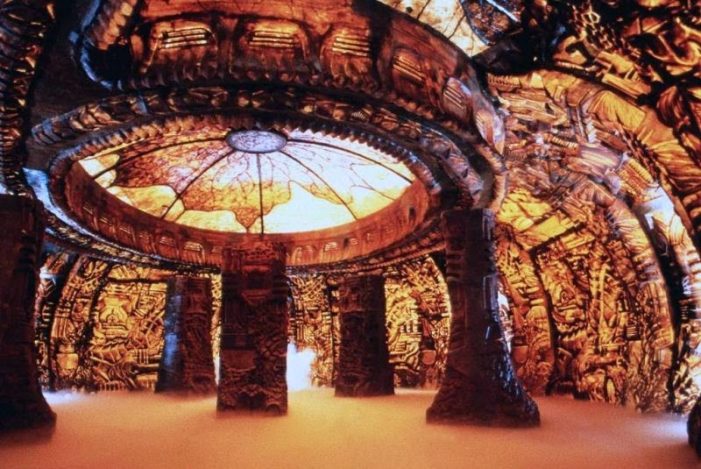 Surprisingly, writer John Thomas divulged that its addition was almost an afterthought. “This Obelisk was sort a touch (Paull) added later.” John’s commentary revealed “that he felt that kind of gave it a resonance that was almost ancient earth-like.”

Another modification was made in regards to the ship’s air quality. In the film’s climax, having your hero Mike Harrigan coughing and struggling to breath during a fight to the death with the City Hunter Predator understandably lost its appeal to director Stephen Hopkins.

So, the unbreathable methane fog found within the pages of the shooting script was excised, discarded for the semblance of just a high temperature to match the warm climate from where the Lost Predators originated. 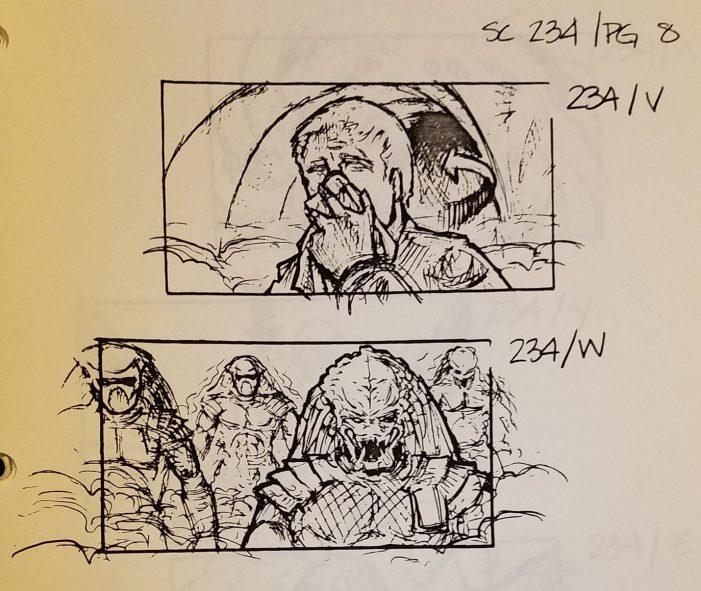 As director Stephen Hopkin’s explained in the 2004 Predator 2 documentary The Hunters and the Hunted: “We put dry ice in, just to make it feel like a hot environment they came from.”

Alterations were also made to the Lost Predator ship trophy display. While working out the logistics with Larry Paull, a concession was made. Rather than moving forward with the original scripted concept (alien skulls contained within gel-like modules) that may have ultimately hindered the audience’s view obstructing the fine detail of Stan Winston’s skull work, Stephen Hopkins opted for a more open exhibit with a closing door. And like the actual Lost Predator costumes, all the trophies were not designed under Larry Paull’s supervision, but crafted within Stan Winston Studios.

Maybe the biggest change of all in regards to the Lost Predator Ship was no longer leaving the spacecraft’s exterior in darkness and shrouded with mystery. Larry Paull felt it was necessary to balance out the interior of the ship in the sequence with an outside shot as well. And his method of choice was a matte painting.

An older form of special effects, a matte painting is painted artwork depicting a realistic set or location that allows a filming crew to create the illusion of an environment that is not really present on set or location. Paull already had a terrific matte painter on staff by the name of Rocco Gioffre.

The problem was the crew was already on a short schedule and Rocco had his hands full with other Predator 2 work like painting a Los Angeles skyline for a night sequence. So Rocco asked friend and colleague artist Mark Sullivan to join the team and help out by painting the Lost Predator ship.

Alien vs. Predator Galaxy had the pleasure of speaking with the legendary Mark Sullivan for this article and asked Mark to recollect his Predator 2 experience as well as his inspirations for creating such a stunning and unequivocally unique alien craft. Not only were we fortunate to receive Mark’s insight, but we were thrilled to receive never-before-seen photos of the Lost Predator ship matte painting as well!

“There were no concept art designs of the ship, at least none that were provided to Rocco and me. Larry Paull gave us a casting of a section of the Predator costume, part of a lower arm armor shield type of thing, and Larry’s suggestion was to capture to look and feel of the costume item for the look of the ship. 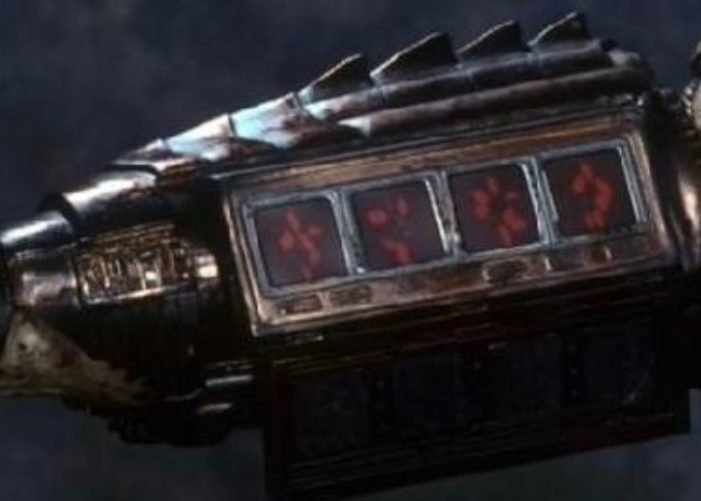 “I remember there was a kind of sawtooth ridge, and some sharp angular edges, so I tried to depict such shapes amid the mass of pipes, tubes and shields making up the ship exterior. Another design reference was the section of the ship that had been constructed full scale, to allow Danny Glover a section to walk on.

“Some of the mish-mash of the exterior pipes were influenced by parts I’d seen on steam locomotives. Of course, these details were just suggestions, there was no logical reasoning to any of it. 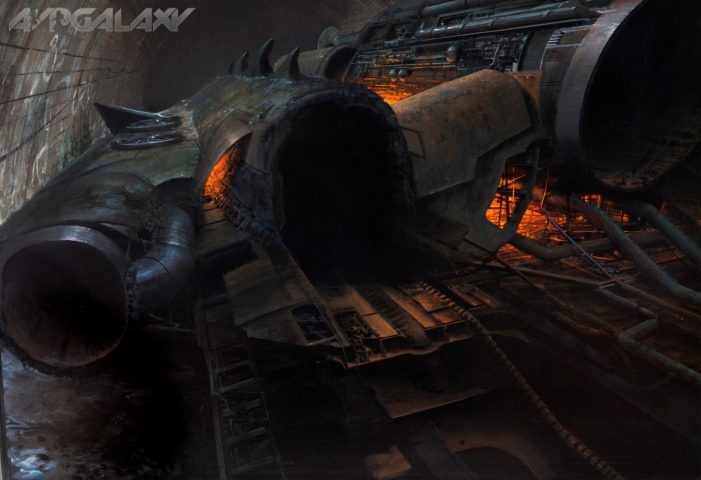 “The only other design consideration I can recall was the idea of having an enormous rocket engine. The reason for this was that we were going to suggest the ship was firing up to leave in one of the shots, and we wanted a vivid display of the ignition. 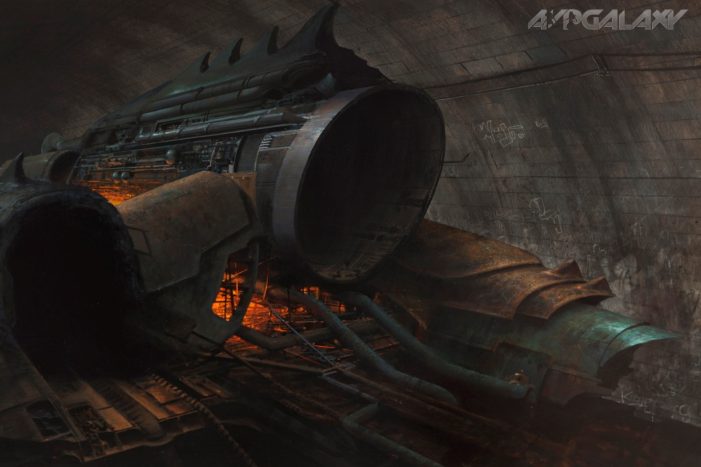 “The effect of the engine ignition lighting up the frame was mainly created by doing another matte painting of the lighting effect, and double exposing it back over the main matte painting in another camera pass. Of course, these effects where all created in camera with film, using oil paintings. This was still a few years before digital effects. 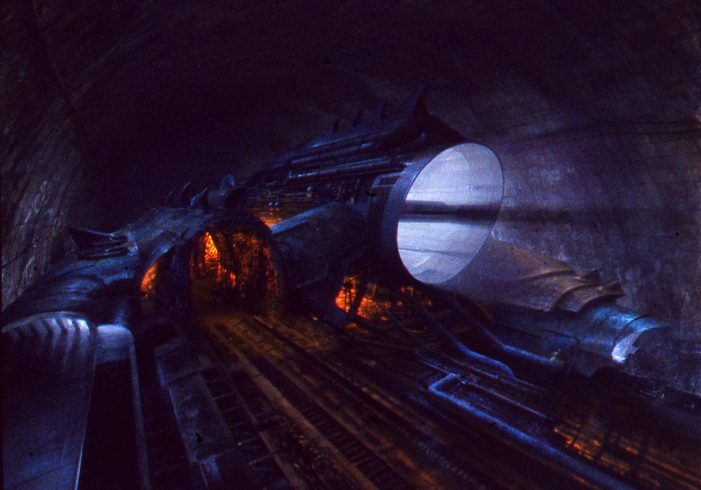 “The matte painting was used in about 4 cuts in the movie. I recall that the lighting on the live action set was slightly changed on one of the live action takes, so Rocco had to make some minor adjustments to the painting, as I had gone off to work on another project by the time the third cut was being photographed.

Also, I recall Rocco created another flash painting to suggest a lighting effect occurring at the far end of the ship. In the photography of the painting, Rocco added in some subtle smoky-fog live action elements, that were very nice enhancements creating more depth and mood.” 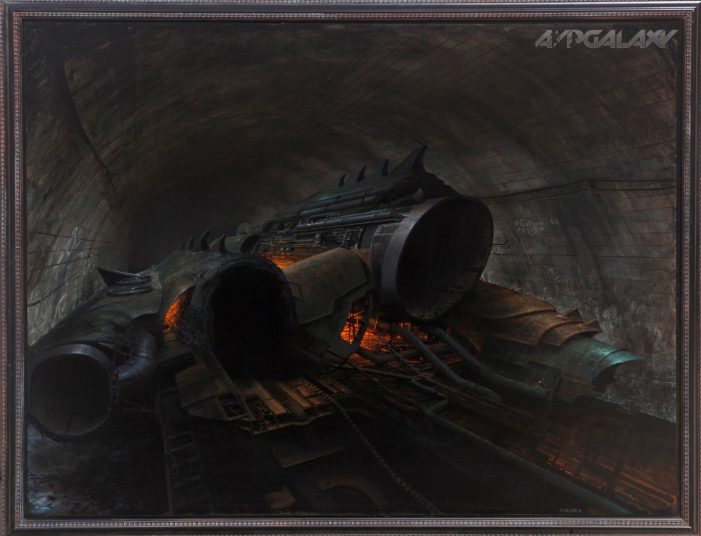 Mark Sullivan also finally revealed to Alien vs. Predator Galaxy the answer to the age-old question: Did he just conceptualize the rear of the Lost Predator Ship or did he ever rough out an entire design from front to back? Mark’s answer: “I didn’t do any sketches or thinking of the ship beyond the limits of the matte painting work.”

However, Mark was very complementary of the creative design work behind NECA Cinemachines Lost Tribe Ship. “I really like how whomever designed it incorporated the ship’s appearance in the matte shot into the shape of the model.”

When Predator 2 was finally released theatrically in the United States on November 21st 1990, the culmination of all this hard work was revealed to audiences resulting in one of the most fascinating and unique alien spacecrafts to have ever to be conceived on screen.

Even critics that disapproved of the action-packed sequel found themselves still admiring the creative work behind this stunning Lost Predator spacecraft. Perhaps executive producer Michael Levy described it best when saying: “It’s something that I don’t think you’ve seen in quite a long time.”