An untitled Alien TV show from Fargo creator Noah Hawley is in active development at FX and will be coming to the Hulu streaming platform.

Disney announced the Alien FX Series on December 10, 2020 during an investor livestream by FX Chairman John Landgraf and it will be coming to the Hulu streaming platform. Landgraf described the series as combining elements from Alien and Aliens, and will be “set not too far into our future, it’s the first ‘Alien’ story set on Earth—and by blending both the timeless horror of the first ‘Alien’ film with the non-stop action of the second, it’s going to be a scary thrill ride that will blow people back in their seats.” Some promotional pictures were shown off in the presentation: 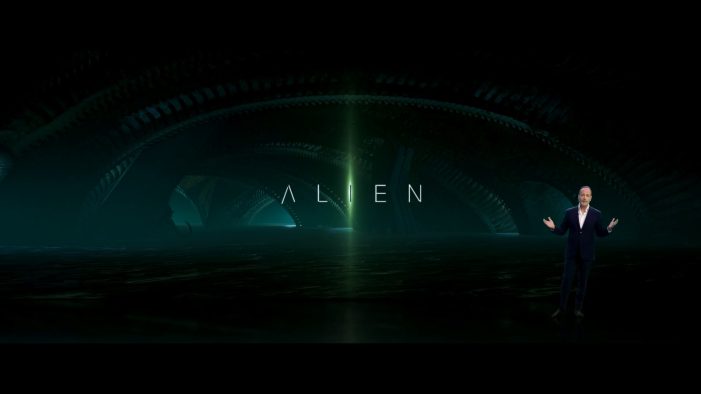 Writer and Producer Noah Hawley will be helming the series, and Ridley Scott is in advanced talks to Executive Produce. Hawley is best known for being the showrunner on the shows Fargo and Legion, and has been working to get an Alien series launched for quite some time.

In early 2019 reports surfaced on how his series pitch was shelved as the executives at then-20th Century Fox wanted to keep Alien a theatrical series. When Disney bought Fox, further talks happened with Disney about getting it off the ground. Hawley spoke about the show again in September 2020 and he compared what he would have done with Alien with Legion.

“Alien is on some level the complete opposite of Star Trek. It’s sort of about humanity at its worst,” he said. “There’s this moment in the second film when Sigourney says, ‘I don’t know which species is worse. At least they don’t screw each other over for a percentage.’ If you look at what Aliens tends to be, it’s usually a trapped story – trapped in a ship, trapped in a prison, etc. And because the Alien has this life cycle to it, where it goes from egg, to chestburster, to xenomorph, there becomes a certain routine to it.”

He continued: “I thought it would be interesting if you could expand. If you’re going to make something for television, you’ve got 10 hours let’s say. Even if you have a lot of action, like two hours, then you’re still going to have eight hours left. So what is the show about? That’s what I tried to talk to them about. As I did with Legion, the exercise is: Let’s take the superhero stuff out of the show and see if it’s still a great show. What’s the show about? Let’s take the Alien out of the show. What’s the show about? What are the themes, who are the characters and what is the human drama? Then we drop the aliens back in and we go, ‘This is great. Not only is there great human drama, but there’s aliens!’”

Just before Disney revealed the Alien show, Hawley said he still had talks about doing the show from time to time.

You can full the full news archive for Alien TV Series here.