Here’s a look at the history of AvPGalaxy and the various layouts. There are four versions. The site is usually given a radical update whenever a new movie has been announced.

AvPGalaxy has a long and winding history dating back to Summer 2002. I wanted to make a website about something and after playing AvP2 on the PC, I was pretty much hooked on it. AvPGalaxy was first launched in October 2002 and was primarily a website dedicated to AvP2. I was pretty new to web-designing at this point and didn’t know a whole lot about it. It was hosted on my ISPs web server, Freeserve. When it first launched it had an alien-esque colour scheme and the banner was just glowing green text. It was never a news site and was only intended to be a resource for AvP2. I took the following screenshot in the Internet Archive so a few of the images are missing. 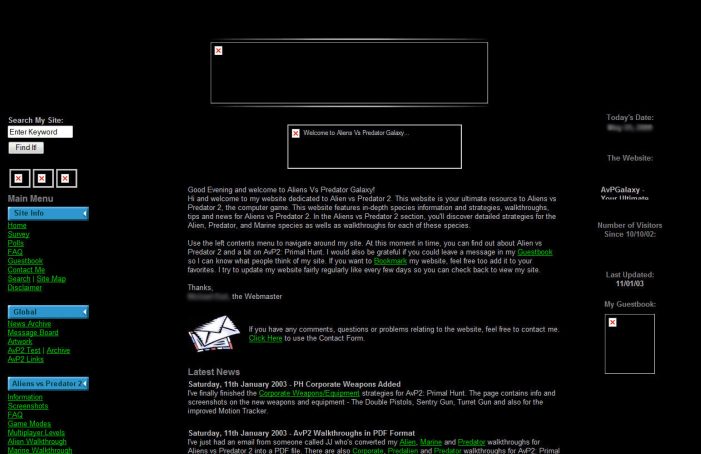 By the middle of 2003, I had branched out more into other things and started to report news on various Alien/Predator related things. The picture below is from August 2003. At some point in 2003, I had ditched the glowing text banner and made a different one. In August 2003, I had also added a forum for the site which was hosted on Conforums. In November 2003, I had changed ISPs and lost access to my website. This basically meant I couldn’t update it anymore. I had intended to just abandon it but with a little help, I found a new free web host called T35. 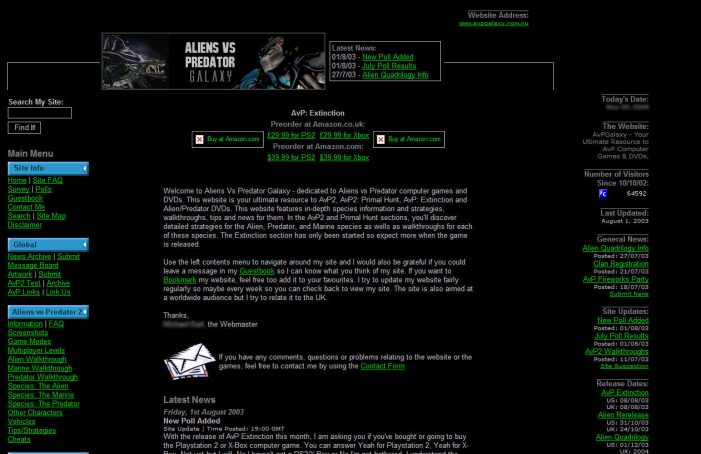 With the AvP Movie on the horizon, I wanted to transform the website from a gaming site into a movie-based news website. I got to work in January 2004 to create a brand new layout. It was re-launched in February 2004. Throughout the coming months, I was practically reporting news daily on Alien vs Predator. The site grew incredibly popular. News articles would frequently receive hundreds of comments from people. At its peak, it was receiving around 10,000 visitors daily. It wasn’t without its problems however. The host I was on was absolutely terrible. It was frequently down and slow and forced ads onto people. I almost closed it down in June 2004 because of these problems. In June 2004, PlanetAvP offered me web hosting on the Gamespy network and by July 2004, I was hosted on there. In August 2004, I saw Alien vs Predator for myself and was truly disappointed. So much so, that I closed the website down permanently. Here’s a look at the website from August 2004: 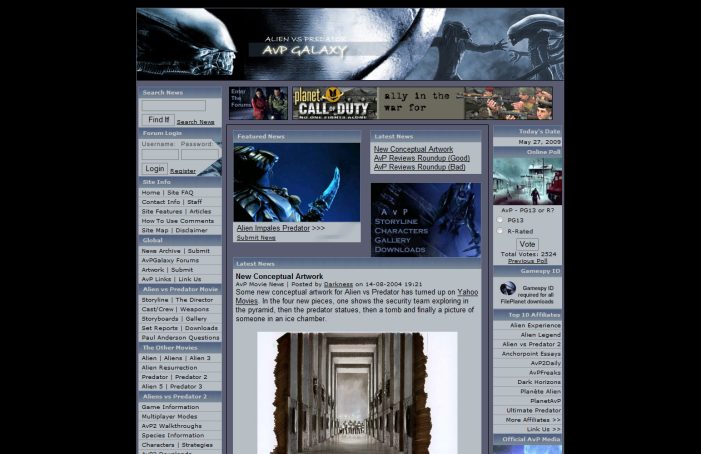 I perhaps overreacted over the incident but to me, I just felt like I had wasted the entire year reporting news on this movie for nothing. When I closed the forum down a few days after, it split into two forums. One called AvP Fan Base which didn’t really last that long and another one called AvPOutbreak. Outbreak was quite popular but the person who was hosting the site disappeared after a couple of months. I didn’t leave the AvP Community altogether when I closed the site. I kept on visiting a small forum called AvPFreaks up until July 2005 before joining AvPOutbreak myself. In April 2006, AvPOutbreak and Alien Experience merged together.

I started work on AvPGalaxy shortly after AvP Requiem had been announced in April 2006. I was always going to bring the site back at some point so it seemed like the right time. New content and features were added and it was relaunched 10th December 2006. 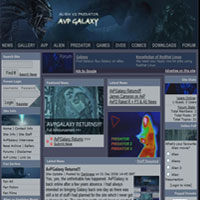 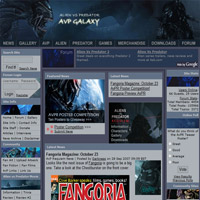 Throughout 2007, as hype for AvP Requiem was building, AvPGalaxy was yet again the ‘pulse’ of the community. We had a number of interviews with various cast and crew for AvP Requiem and even had one of the director’s posting here on a regular basis. The forum grew pretty big in 2007 with thousands of people joining and posting on the forum. As we got into 2008, as predicted, activity started to slow down. We’ve generally had the same banner on the site since we launched. I update it around Christmas and add some snowy graphics. I also changed the banner temporarily on May 25, 2009 to celebrate ALIEN’s 30th Anniversary. 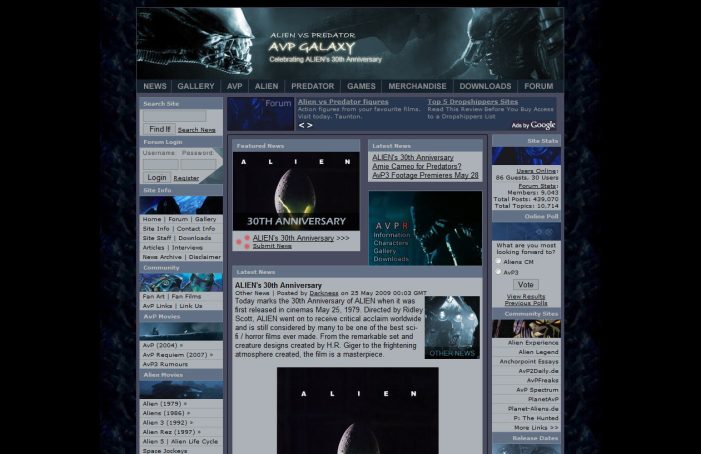 There wasn’t much happening in the community towards the end of 2008 and early 2009. News came out that the upcoming Aliens games could be cancelled which didn’t help. April 2009 was a pretty important month as the first screenshots of AvP3 were released as well as news of a new Predators movie coming out. I decided it was about time to update the website. I got to work in May 2009. I kept the same colour scheme but there has been a number of layout changes. It’s slightly wider with all new new graphics. The website is a lot sleeker and has essentially been rewritten from scratch. 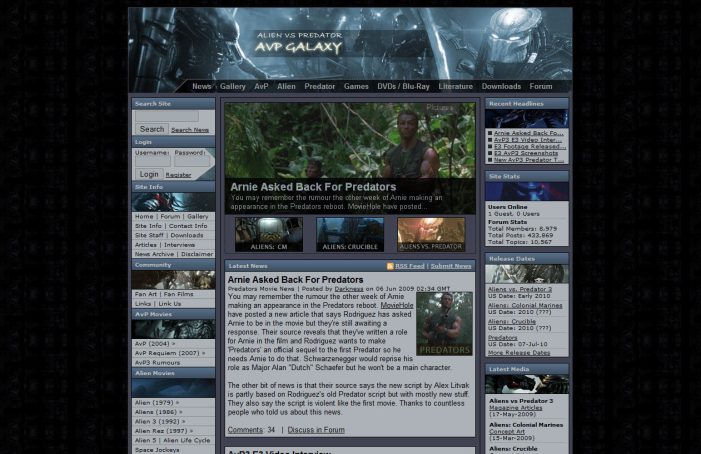 As Predators was coming out in July 2010, I changed the banner so it was more Predator-orientated. In August 2010, we were having many problems with the web host. We were getting too much traffic and they repeatedly suspended the site. So we had to look elsewhere. Then we found Fan-Sites.org which hosts fansites like ours for free. In return we have to display an ad banner on the site. 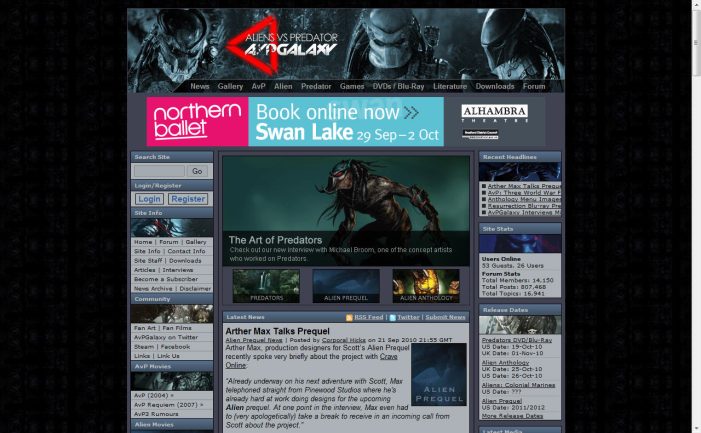 After Predators had been released, the next big thing was the Alien Anthology Blu-Ray set which was released in October 2010. Staff Member ikarop designed a new banner for the occasion themed around the Alien movies. 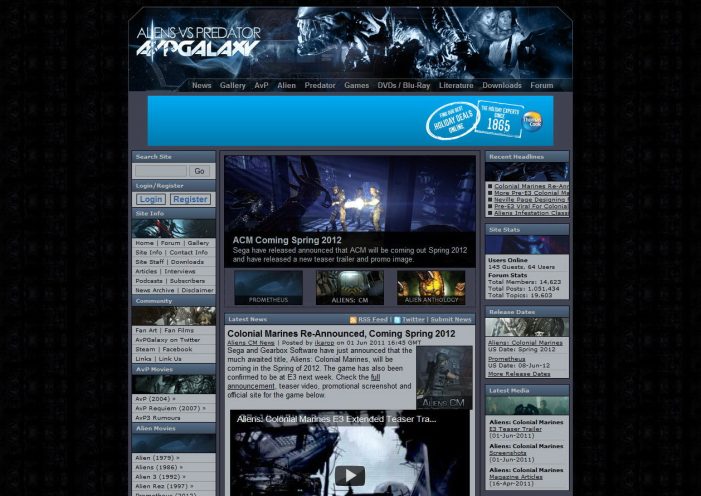 The site was updated at the end of October 2012 with a new version. This time it was themed around the upcoming game Aliens Colonial Marines. It’s a slightly wider layout, with a new header and graphics, new background images. There’s curvier headers and the new category icon has been shifted. 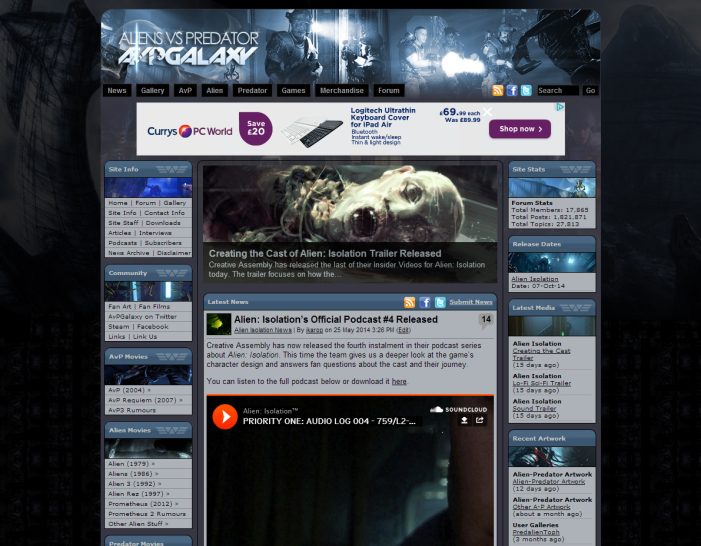 The website was updated again and the theme was based around the Alien Isolation game. It’s perhaps the biggest shift in terms of layout since it was launched – going from a three-column layout to a two-column blog style layout. It has a wider layout with excerpt news posts instead of full news posts on the frontpage. The comments system has also been redesigned to be more integrated into the frontpage.

Throughout 2013, 2014 and 2015 we continued to provide regular coverage of Alien: Isolation. AvPGalaxy also had the opportunity the visit the Creative Assembly studios and get an early hands-on with the game and interview some of the development team. 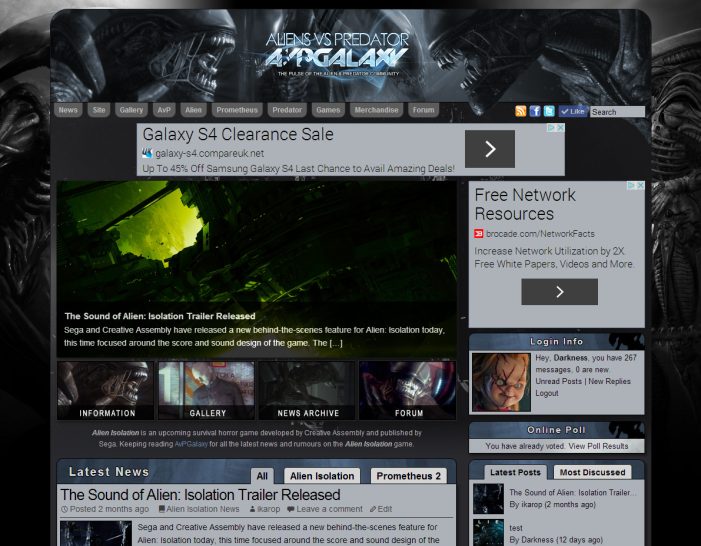 A new theme was released in August 2015. It kept the same layout but the graphics were updated to include an Alien and a Predator. Over the course of 2015 and 2016 AvP Galaxy was alive with coverage of Alien: Covenant. We brought the community the first images from the shooting of the film and some of the first exclusive information on the Neomorphs.

In May 2017, we were invited to the global premiere of the film and had the opportunity to interview Sir Ridley Scott, Michael Fassbender, Katherine Waterson, Danny McBride, Billy Crudup and Demian Bichir.  2015 and 2016 also saw the announcement of The Predator which we focussed on up until its release in 2018. 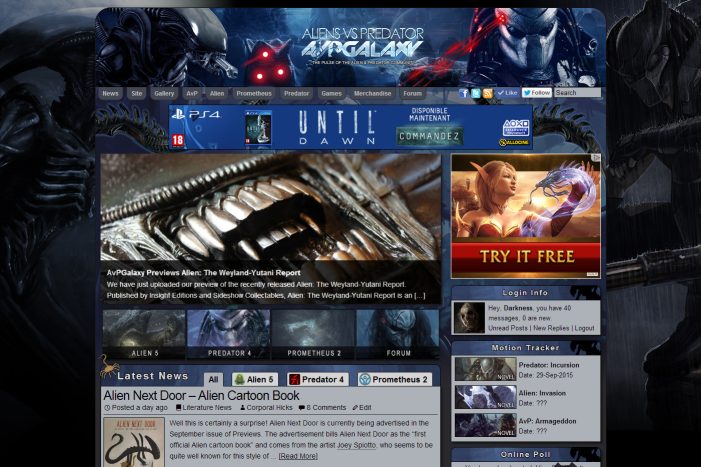 This was probably one of the biggest gaps to a new design at about 4.5 years. I based this new one around Hadley’s Hope.

AvPGalaxy In Other Media

AvPGalaxy has been featured in two documentaries.

The Alien Fans documentary was made by Dennis Lowe who also made the Alien Makers documentaries. He interviewed co-admin Aaron Percival (Corporal Hicks) along with a few other familiar people for the documentary.

AvPGalaxy can be seen in the Prometheus Blu-Ray special features. We appear in the last five minutes of the Furious Gods documentary as well in the enhancement pod: ‘The Case of the Fake FanFic’.

Corporal Hicks was interviewed by the Perfect Organism podcast about how he got involved in the website and the franchises: