Here you’ll find the questions put to Paul Anderson by fans and his answers given. These were  found in the AvP Xtreme Desktop which was an ‘interactive desktop wallpaper’ released before the film’s release.

Q) In the last question posted you made reference to the dark horse comic series. And, from your web previews it looks like you have (at least in part) designed one of your characters after the lead human female in the comic. How has your love of these two series and the comic influenced your vision and creation of the human characters in your film?

A) The choice to cast a female lead in AVP was heavily influenced by both Machiko in the Dark Horse comics and also Ellen Ripley from the Alien Franchise. What we have also tried to do with the movie is follow the story structure of both Alien and Aliens – a relatively slow build to the action to allow for more character development – so that when the killing begins in earnest, the audience have grown to know and like the characters that are put in the line of fire.

Q) One of the things that I feel the 3rd and 4th Alien films lacked was some of the original score from both Alien and Aliens. Will this film have the classic tunes from Alien, Aliens, and Predator as well as some new score material?

A) Recording sound for AVP:
All Predator and Alien sounds were gathered especially for AVP using the latest digital recording technology. A specially developed tungsten carbide microphone was built for our sound designers that could deal with the high level of noise each of the species made and ensured a high degree of protection from various acidic fluids they excreted. Most of the Alien recordings were made early in the morning in the open usually from one of the various reinforced compounds they were kept in during filming. Essentially Aliens are more dangerous at night, so recording them in the early morning sun allowed a degree of safety for the sound designers as the Aliens were at their least active period. In order to get the full range of vocal noises Aliens produce, the microphone was hidden inside a turkey and swung from a boom arm 20ft above the compound. Turkeys are the Alien equivalent of our bar snacks, and they become very animated and vocal when one was swung out of reach above their heads. After a couple of weeks enough material was gathered for the film and could be sent back to the sound rooms for further sonic enhancement.

The queen proved to be a tricky customer for additional sound work, as she needed to be kept at low temperatures in an industrial freezer, which unfortunately was too noisy to make any recordings. Fortunately, she took an instant dislike to our German editor who kept running dangerously close to her eggs during rehearsals allowing us to get plenty of new growls and roars.

Predators need to be decloaked for any recordings to take place, which presented one huge problem if anyone came near them with a microphone as they immediately cloak into attack mode making recording futile. Fortunately a Predator spear left on this planet several years ago had a radio microphone hidden inside it and tactfully left near a predator ship. The spear was taken on board by one of the Predators and noises picked up by the spear were burnt onto CD at the satellite receiving station used in the movie.

How to make an Alien cry:

Alien growls and roars are made from a wide selection of sounds. The main element in any alien cry is generally a pig squeal. Depending on what an alien is doing a variety of other sounds can be added to this. The palette of sound used on AVP included snakes, zebras, monkeys, horses, the human voice, and even a rabbit. All these sounds were synthesised together and the pitch and length were altered to fit the picture. Further processing was used to disguise the characteristic of the original sound. Depending on the situation low frequency or sub-bass sounds were added to give power to the sound. These were made mainly from slowed down human noises recorded by the sound team which were combined with pitch shifted animal calls. At any point a choice of three different sounds could be drawn upon to create the necessary power required for the shot.

How to make a predator purr:

Predator sounds were recreated from scratch, but had to retain the recognizable language of purrs and clicks defined by previous films with a more updated feel. The distinctive clicking sound is created when someone vibrates their throat whilst trying to immatate a cat purr, or gargling. To enhance this sound recordings were made with various liquids in the sound teams mouths to give different tonal qualities. After this process, the sounds were changed in pitch and length then enhanced using a sonic resonator, which made them bright enough to cut through in the mix. These calls were then merged with a variety of animal sounds such as Tigers, Lions and Elephant roars which gave them a more bassier warrior type of sound.

Q) In ascertaining the setting where all 3 races would meet, did you take into account any ancient mythology as using a pyramid for the setting may suggest?

A) Well, something that’s always fascinated me is the work of Erich Von Daniken, who wrote CHARIOTS OF THE GODS and lots of other books, who talks about the similarities between Egyptian pyramids, Cambodian pyramids, Aztec pyramids, three separate cultures that really have nothing to do with one another, that should never have seen each other, should have had no communication, but they ended up building, pyramids that look surprisingly similar. And of course Daniken’s answer was that aliens built the pyramids, or humans built the pyramids with alien help. And, of course, we agree with him! The backbone of our story is that the movie starts five thousand years ago in Cambodia, three thousand B.C., and you see aliens and predators on the earth. And the idea is the predators use the earth for their manhood rituals, and, what happens is every thousand years, because predators have a very long life cycle, they drop, five teenage predators at a pyramid, and they have to fight for their survival. They fight aliens. And if they survive the battle against aliens they become predator adults.

Q) Do you see your movie as remaining true to the Alien and Predator history or are you going to set a new direction for the 2 characters? 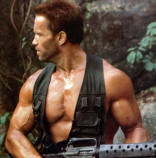 Q) Why did you decide to use costumes and make-up over CGI?

A) One of the reasons why I decided to go mainly with people in suits is because I preferred that look to using a lot of CG. The strongest movies, in my opinion, in the ALIEN franchise are ALIEN and ALIENS. I believe the reason for that, and the reason why they still hold up very well now, is that those creatures are really there! They’re really in the frame with Sigourney and with the others. As the franchises tended to rely more and more on visual effects and on CG, especially in ALIEN RESURRECTION, for example, you could see the visual effects.

You could see the creatures were fake and I think that made them slightly less scary. In this movie we wanted to try and avoid that. We wanted them to really be there, which gave us a lot of problems because it’s easier to make CG creatures. You can make them do whatever you want to do. They can run around on the ceiling, they can hop, they can skip, they can go one hundred miles an hour, etc. A guy physically in reality can’t do that. But we wanted to go that way because that’s more realistic, that’s more scary, and I think it’s a more classic route to go. It’s the kind of Ridley Scott and James Cameron route to go and that’s what we wanted to do.

Q) What has been your history with these characters?

A) I’m a humongous fan of ALIEN and PREDATOR. I think you’d be hard pressed to find anyone who’s seen those movies as many times as I have. I didn’t come up with an idea of an ALIEN VS. PREDATOR film. That was very much hinted at in PREDATOR TWO, of course, where you saw Danny Glover go inside the spaceship — he saw the alien head inside the predator’s spaceship. And then Dark Horse did a fantastic series of comic books and the AVP comic books. I had an idea for a movie, I’d made one, small, independent, European movie, so I was never going to make a movie like this. Cut to eight years later and, Fox were trying to make this movie and asked me to come in and talk about it and I pitched them exactly the same idea that I’d had eight years beforehand, and this time we got to go and make it!