An alien-predator hybrid, commonly known by fans as a Predalien, is when a Facehugger infects a Predator. The resulting creature is a Predalien. 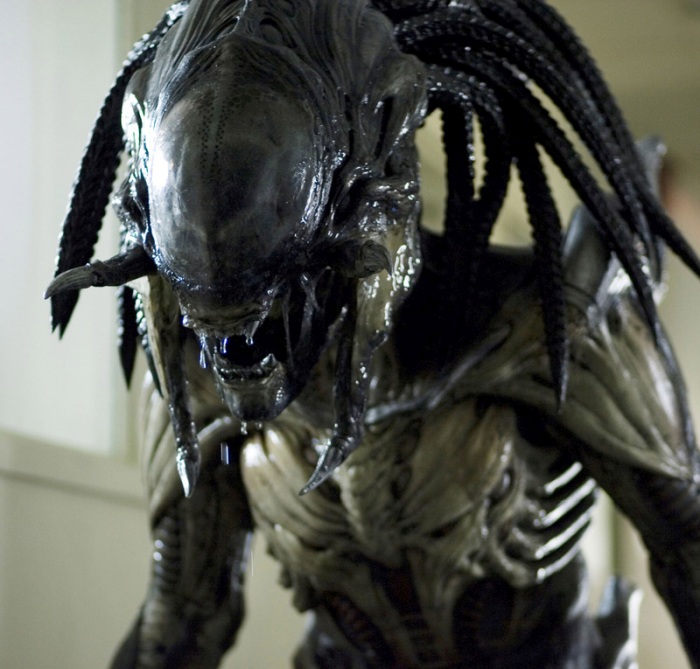 Fans have such different opinions on what a Predalien should look like. It takes on characteristics from its host, just like the alien in Alien 3. Based on the official media so far, a Predalien is much larger and stronger than a regular adult alien. It walks on two feet and can jump over great distances. It also has a set of mandibles just like a Predator as well as dreadlocks.

A Predalien inherits mandibles from a Predator. These appear right from the Chestburster stage as seen in AvP.

The next thing a Predalien inherits from a Predator is dreadlocks. You’ll usually find among a lot of fans that one thing the hybrid shouldn’t have is dreadlocks. I suppose one question is are dreadlocks on a Predator really hair or is it just for show? But even if it is real hair, why would a Predalien incorporate this characteristic? The aliens seen in the previous films never had hair from a human host so why would they have it from a Predator?

The Predalien has an inner jaw just like regular aliens which it can use to kill people. In AvP Requiem, the Predalien also uses its inner jaw to force Chestburster embryos down the throats of pregnant women. See Reproduction Method for more info.

The Predalien is loyal to aliens and won’t kill them. Generally, a Predalien acts like a regular alien though the one featured in AvP Requiem is different. You’ll notice that it also incorporates some of a Predator’s behaviour too. For example, when the Predalien killed the chef, it ripped his spine out afterwards. There was also a deleted scene when the Predalien had skinned the Predators on the crashed scout ship and hung them up. See the AvPR Deleted Scenes section for more about this. Inheriting Predator-behaviour is generally not considered canon. It didn’t look right in AvPR and was ultimately cut out.

The Predalien possesses a much bigger and stronger tail than a normal alien. In AvP Requiem, the Predalien used its tail to stab Ricky in the shoulder in one scene and to impale the ‘Wolf’ Predator at the end of the movie.

Following on from above, the directors of AvP Requiem said the Predalien can’t lay an eggsack so it uses a new reproduction method instead. It can force multiple Chestburster embryos down the throats of pregnant women with its inner jaw. After a period of time, four or more Chestbursters will burst out of a woman’s stomach, killing the woman in the process. These Chestbursters grow into regular aliens and don’t have any Predator-like features. It’s not known if this reproduction method is the standard for all Predaliens or just this one. How is a Predalien able to do this? Can regular aliens impregnate pregnant women too or is it limited to Predaliens? 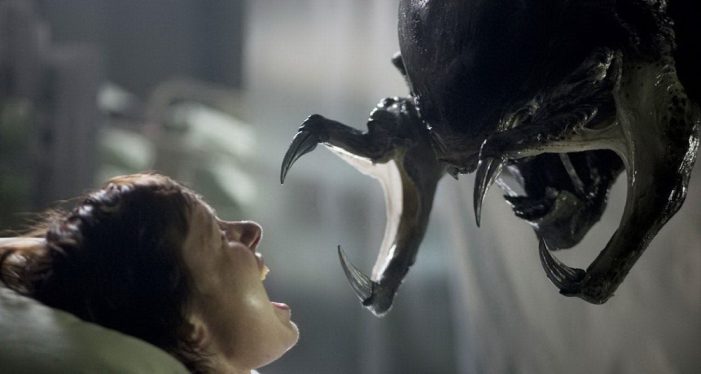 Dave Dorman was an artist/cover artist for Dark Horse and came up with the first Predalien design. The image seen in the gallery was a painting he did around 1992 and was one of the original designs of the Predalien. Fox had approached him to design the Predalien for the AvP Movie when they were thinking of doing the film all those years ago. As you can see in the picture, it only has the bottom two mandibles and the dreadlocks but also the end of the creature’s tail is similar to a predator’s wristblades.

AvP Duel was the first Alien-Predator comic to feature a Predalien. The creature is very similar to Dave Dorman’s design. In fact, it was probably based on his design but I’m no expert on comics. ;) In the comic’s story, a Predalien Chestburster emerges from a dead predator that a group of marines were carrying. The Predalien kills a lot of the marines and faces off with another Predator. With the help of a marine, the predator kills the Predalien.

Alien vs Predator, a first-person shooter game for PC, was the first video game where a Predalien appears. It can be encountered in a few of the missions. The Predalien wasn’t created through a Facehugger infecting a Predator. Instead it was an experiment by humans through combining Alien and Predator DNA.

The Predalien makes a few appearances in the PC FPS game, Aliens vs Predator 2. It can be encountered in the singleplayer game and is playable in multiplayer. It’s pretty strong, and can jump really far but it’s also very slow. It also doesn’t have the ability to head-bite its victims. In the expansion pack, AvP2 Primal Hunt, it was a playable character in the final Predalien mission in singleplayer. The major change from AvP2 to Primal Hunt is that it has been given the ability to head-bite. It actually uses its mandibles to do this.

The Predalien next appeared in the real-time strategy game, AvP Extinction, which was released in late 2003. They are similar to the ones in AvP2: high durability but somewhat slow. They can however heal themselves automatically when they’re not been attacked. When it has been upgraded – Predatory Growth Response – In combat, it receives growth hormones and when there’s enough, it transforms into a tougher Predalien.

In AvP, we saw right at the end of the film, a Predalien Chestburster emerging from a dead Predator on the predator ship. It’s clear that it has mandibles just like a Predator. The design used below was based on Patrick Tatopoulos’s conceptual artwork which he drew for the film prior to pre-production.

The hybrid appears in AvPR. It has the usual Predator features such as mandibles and dreadlocks. It also has a new reproduction method which hasn’t been seen before in the Alien series. You can read about this above. The Predalien here also has a large crown and it was implied by the directors of the movie that this Predalien was in the process of turning into a Predalien Queen.

In the film, it’s the same Predalien from AvP. It causes a Predator scout ship to crash back onto Earth and escapes. You see the creature kill various people and impregnates various women. It has various battles with the ‘Wolf’ Predator and eventually they face off at the end. The Predator rips out its inner jaw while the Predalien impales the Predator with its tail. Finally, the Predator impales it with its wristblades. They are both killed when the government drop the bomb on the town.