Any fan of the Alien/Predator series who reads novels will know the name Perry. Steve Perry wrote the first two Aliens novels and with his daughter, Stephani Danelle, he wrote the Aliens vs. Predator novelization – the introduction of the Yautja culture. Danelle soon started writing novels on her own and has been responsible for many fan-favourites. She is also the brains behind the recently announced The Weyland-Yutani Report. I recently had the occasion to conduct an interview with her.

AvPG – First off, Danelle, thank you for agreeing to answer our questions. As someone so important to the franchise but not often in the spotlight it’s fantastic to finally get to ask you some questions. I think first of all, let’s start with how you first got into writing? Did you father play any part in that?

SDP – Totally. I grew up believing that writing was a viable career, and when I started writing my own stories, I had someone to show me the format, who also knew the business end of it. He believed I had talent, and offered to collaborate with me early in my career so that I could establish a name for myself. I’ve been very lucky.

AvPG – Your writing career consists of media tie-ins – primarily Aliens/vs/Predator and Resident Evil. What is it about tie-ins that made you want to mainly write them?

SDP – Well, the money is nice. Honestly, though, I think tie-ins were kind of perfect for me, especially when I was starting out… I had some natural talent, but very little confidence in my skills. Tie-ins were like homework assignments, with a deadline and already established characters and environments. I got to be creative within clearly drawn boundaries.

AvPG – Between you and your father, the Perry family is responsible for some seminal entries into the Alien/vs/Predator fiction. What is it like being so strongly associated to a particular franchise?

SDP – I didn’t know we were, really… I think of my father as the famous one. I just finished an Aliens book, though (The Weyland-Yutani Report, for Insight Editions), and realized that I know more about the universe than I thought. I’m not an authority, by any means, but it was very cool to realize that my name is tied to something that people care about.

AvPG – For a franchise you’re so heavily involved with, I’d imagine your first experiences with the films to be memorable. Can you remember the first time you saw the films?

SDP – Yup. The first Alien movie. I was twelve, and snuck downstairs while my family was asleep to watch it on cable. I was terrified and also thought it kicked butt. I was 18 or 19 when Aliens came out, and I saw it three times on the big screen. The universe was so clearly drawn, so realistic and engaging… I feel like I’ve always been a fan.

AvPG – When you are writing a novelization of a comic how exactly do you deconstruct the original and what makes you make changes? For example, in Labyrinth you spread the issue #0 over several chapters as flashbacks.

SDP – To be perfectly honest, that was so long ago, I barely remember the process. I know I kind of went by page count… Like, I had to make the first thirty pages of the comic turn into 100 pages of material, and I had to use these scenes by page 52, or whatever. I do remember learning from my father that what looks good in a panel doesn’t necessarily make sense when you have to explain it, so poetic license is often called for to make a story hang together properly. 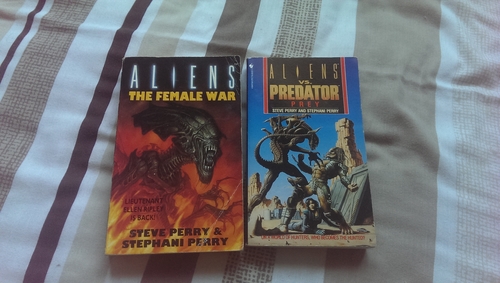 Aliens: Female War and Aliens vs. Predator: Prey, both co-written by Steve and S.D Perry

AvPG – Your first Alien/vs. Predator novels were co-written with your father. How exactly did your collaboration work?

SDP – He told me to imitate his writing, and I did. I wrote the first draft, he cleaned it up. Our first book, he had to clean up a lot; by the second, his job was slightly less taxing.

AvPG – You wrote the novelizations for both Labryinth and Berserker. Both are very different comics, Labryinth being a horror, character story whilst Berserker was more of a frantic, over-the-top action story that knew it. How did you approach writing these completely different (tonally & stylistically) stories?

SDP – I’m not sure how to answer that. My writing career has always been catch-as-catch can, so when I was offered a project, I took it. I was brave and in my 20s, and when I got the media—comic, script, whatever—I just did my best to translate in a way that served the story, that matched the tone. I don’t know that I was always successful, and I was occasionally sloppy with details that I probably should have researched better.

AvPG – Aliens vs. Predator – Prey proved to be very important to the Predator fanbase due to the introduction of the Yautja. Do you remember much about the genesis of the culture you created?

SDP – When you look at the first Predator movie, the culture of the hunters seems very clear; they hunt for sport. In the second movie, we see a Xenomorph skull trophy on the Predator’s ship, which created a cross-over that made sense, and Dark Horse ran with it. My father and I just expanded on what was already there. I know it was my father’s idea, to use the Predators as POV characters… mostly because there were pages in the comics with no dialogue, no text, just pictures of the Predators doing their thing. So we created a language for them (from a South Sea Islands/Polynesian dictionary he had laying around) and just tried to describe what was happening.

AvPG – Randy Stradley wrote a third Machiko series called Three World War. Would you like to come back to finish off Machiko’s story in novelization form?

SDP – Sure. Noguchi was an amazing creation, I was lucky to get to write for her. 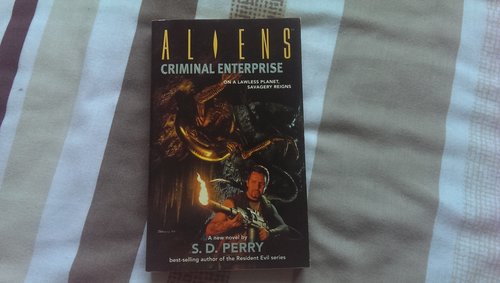 AvPG – In 2008 you wrote an original Aliens novel, Criminal Enterprise, for Dark Horse Press. How did you’re your return to Alien literature come about?

SDP – There were new editors at DH, looking for Aliens stories that didn’t focus so heavily on the Aliens themselves. I pitched a few ideas, and they liked the one with the drug lord.

AvPG – Criminal Enterprise took a very different approach in that the Aliens were largely side-lined. Why did you decide to use them in that matter?

SDP – Like I said, it was an editorial decision. I know that book wasn’t particularly well-received by the hardcore fans, but I liked writing a character-based story, and it was what I was encouraged to write.

AvPG – The biggest criticism of that novel is that the human characters are largely unlikable. What made you decide to use darker characters and do you feel it worked as you intended?

SDP – I liked the characters, actually. But apparently, that was mostly just me.:)

AvPG – Out of all the novels you have written, which was your favourite?

SDP – Hmm. That’s a tough one. They were all fun, mostly… I know that AvP: Prey was probably the most popular. I can’t take credit, though… we just adapted the comic, which someone else wrote.

AvPG – And which character was the most fun for you to write?

SDP – Jeez, I can’t remember the names… In either Berserker or War, there was this big, dumb grunt, I think his name was Polaski…? Shows how much I remember about my own work. Anyway, he was fun. Sorry I sound like such an idiot, but I haven’t read most of those books since I wrote them, and the majority are from two decades ago.

AvPG – Is it a common thing for authors not to read their books?

SDP – I have no idea if it’s common to read your own work. Every now and then I’ll pick up something and flip through it, but most of my early stuff, I haven’t looked at in forever. You know, I’ve never asked any other writers if they do or don’t…

AvPG – Have you ever pitched an Alien/vs. Predator story that wasn’t optioned? If so, could you tell us a little about it/them?

SDP – Most of my work was direct assignment—like, adapt this piece, or write this type of story in this type of universe. The few times I was asked to pitch, I did four or five ideas, and the editors picked one to develop. I don’t remember the ones they rejected… Though to be fair, why would I? All of those books were written on tight deadlines; if the editor or editors didn’t like an idea, I promptly forgot it. Sorry!

AvPG – Out of all the Alien/vs. Predator novels you have written, which has been the most fun?

SDP – AvP: Prey, I think. I was like, 23 years old, living on my own, and I got to quit my waitressing job to adapt an awesome comic into a fast read. Plus, I got paid to do it. What could be more fun? 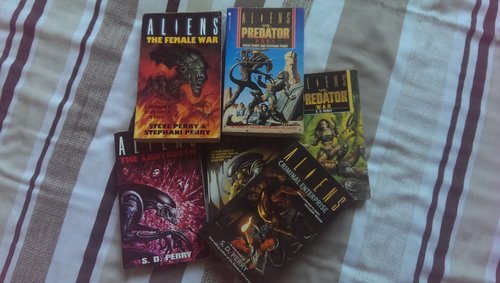 All 6 of the Alien novels written by S.D Perry

AvPG – Your next Alien book, The Weyland-Yutani Report, is due out this year. I understand you wont be able to say much about it but it would appear to be a fictional report written as if in-universe?

SDP – Yep. I got to see the layouts recently, and it looks so awesome… I got to be the Company voice. And the editor really pushed me to find new, interesting ways to present the Xenomorph and the movies to fans.

AvPG – How did you come to be involved in The Weyland-Yutani Reports?

SDP – I got involved in the WY project when the editor at Insight Editions contacted me online. I got an agent when I finished my first original novel a few years ago, so I put the editor in contact with her, and they hashed out a deal.

AvPG – How different was that to writing any of the other Alien novels?

SDP – Way more collaborative. I wrote and rewrote, trying to strike the right tone, and there were a bunch of people involved in development and continuity and fact-checking… I think it turned out very well, though. I’m psyched to be a part of it.

AvPG – How extensive was the research for the new book?

SDP – Oh, man. I don’t even want to talk about it. Weeks of timelines, maps, wiki sites, correspondence, corrections by readers and uberfans. Easily the most research-heavy project I’ve worked on in the Aliens universe.

AvPG – How long did it take you to complete the book and when can we expect to see more about it?

SDP – I spent about seven months on the Report, overall… Though a lot of that was waiting to hear back from various interested parties with notes and such. You’ll have to talk to Fox or Insight Editions. I’m not even sure when it’s supposed to come out, I have this nasty habit of forgetting release dates. I’m a terrible publicist. But the book is worth looking for, it’s like the perfect Aliens coffee table book. I’m hoping they give me extra copies, so I can give them out for Christmas.

AvPG – Lastly, thank you for taking the time to respond to our questions. Is there anything you would like to say to our readers before we sign off?

SDP – You’re welcome! And nothing but hello, and thanks for reading!